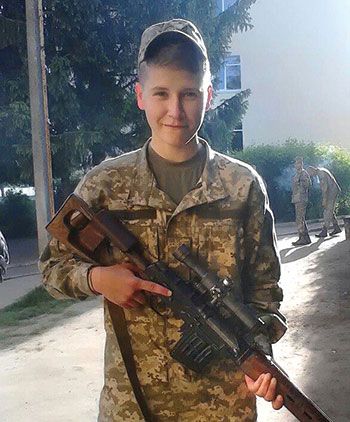 Olesya Baklanova, 19, was one of four Ukrainian soldiers killed overnight on October 10-11.

KYIV – Luhansk Oblast-native Olesya Baklanova, 19, was one of the four Ukrainian soldiers killed overnight on October 10-11 in what was the bloodiest day of the Russia-instigated war since mid-August. Three more servicemen were wounded.

The deputy commander of her unit, which is part of the 92nd Mechanized Brigade, told the newspaper Kharkiv Today that a sniper fatally shot her 300 meters from the frontline near the Butivka coal mine in Donetsk Oblast when she started to survey the area with binoculars at around 8 p.m. on October 10.

She was a contract soldier who signed up at the age of 18. Comrades in arms called her “Leska,” according to Kharkiv Today, which quoted Vyacheslav, a soldier who served with her without providing his last name.

More than 10,400 people have died in the Kremlin-orchestrated Donbas war since it erupted in April 2014. As of October 12, a total of 115 armed forces personnel have been killed this year, according to monthly and daily counts by censor.net, a Ukrainian news site that devotes coverage to the war.

The last woman to have been killed in the war was a medic, Sgt. Sabina Halytska, 23, of the 10th Separate Mountain-Assault Brigade whose base is in the Ivano-Frankivsk Oblast district center of Kolomyia.

On February 21, the mother of one child was killed while providing medical care to civilians in Luhansk Oblast.

According to President Petro Poroshenko, some 55,000 women serve in the Armed Forces of Ukraine. The country’s first female general was appointed last week. She is Gen. Liudmyla Shugaley, head of the Military Medical Directorate of the Security Service of Ukraine.