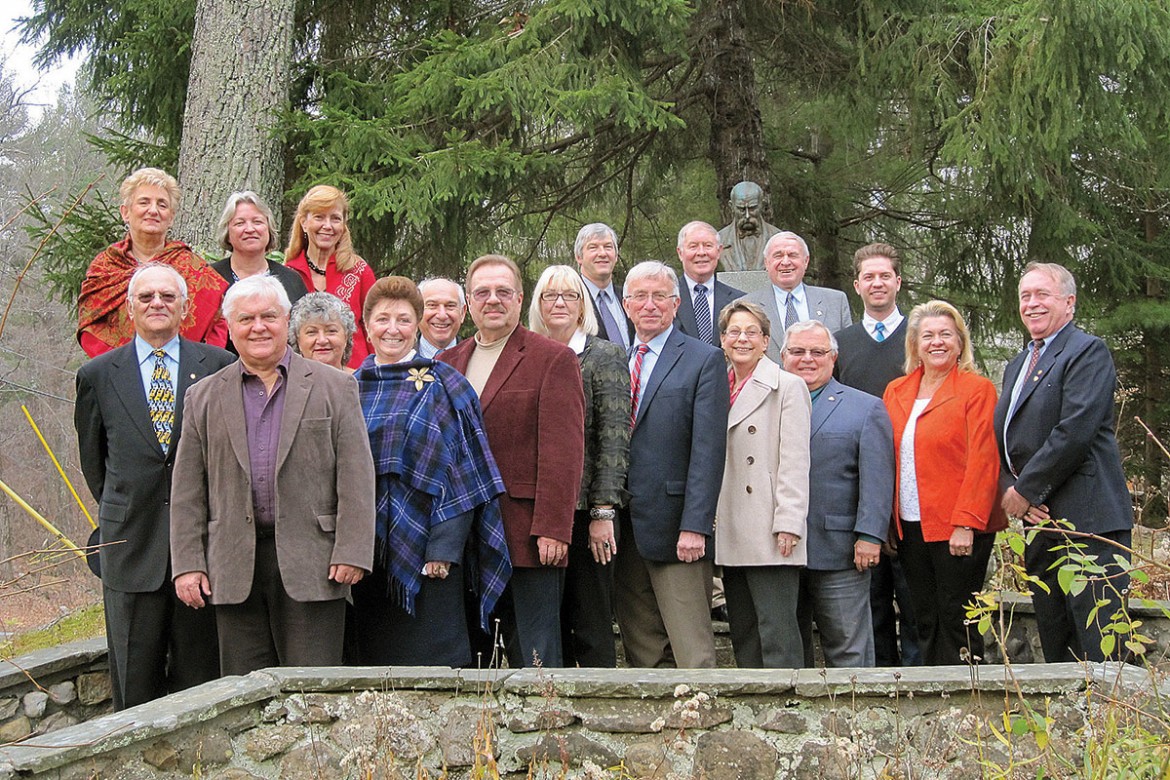 Members of the UNA General Assembly – executive officers, auditors and advisors – at the opening of their 2015 annual meeting at Soyuzivka before the monument honoring Taras Shevchenko.

For our community’s oldest and largest fraternal organization, the Ukrainian National Association, 2015 was a year of some welcome changes and financial milestones, as well as the continuation of fraternal benefits and programs geared toward helping Ukrainians here and in Ukraine.

The best news came in early December, when it was reported that the UNA would soon reach a financial milestone: net admitted assets would exceed $200 million by December 31.

On December 11-13, the UNA General Assembly met at the Soyuzivka Heritage Center for its first regular annual meeting since the UNA convention of 2014. The highest decision-making body of the UNA between its quadrennial conventions, the General Assembly reviewed the UNA’s activity for the past year and adopted a plan of action for 2016. The weekend’s sessions were marked by good news about the UNA’s progress during 2015.

Members of the UNA General Assembly – executive officers, auditors and advisors – at the opening of their 2015 annual meeting at Soyuzivka before the monument honoring Taras Shevchenko.

President Stefan Kaczaraj reported that, as of the end of the third quarter of 2015, the UNA’s assets totaled over $192.5 million, and net income for the first nine months of the year was more than $1.3 million. In addition, the UNA’s surplus as of September 30, 2015, was up to nearly $8.3 million.

Treasurer Roma Lisovich followed up Mr. Kaczaraj’s report by pointing out that, by the end of 2015 the UNA’s assets were expected to reach $200 million, making this organization not only the largest Ukrainian fraternal organization but also the fifth largest Ukrainian organization (in terms of assets) in the United States (ahead of the UNA are four large credit unions). She also noted that net income was projected to grow to $1.7 million by the end of 2015, adding that this would be the third consecutive year of net profits for the UNA.

National Secretary Christine E. Kozak reported that more and more UNA Home Office employees, as well as General Assembly members, are now licensed insurance professionals. That means they are better able to approach potential members and better equipped to serve the UNA’s members. Ms. Kozak underscored, “UNA employees go above and beyond the call of duty in order to satisfy UNA members.” Indeed, the UNA’s customer service is its strength, and “the UNA can differentiate itself from the competition by providing the best customer service to our members,” she added.

While we’re on the topic of the UNA General Assembly, it should be noted that there were some changes in the membership of that body. Dr. Wasyl Szeremeta, a three-term member of the UNA Auditing Committee, resigned as auditor in order to accept a position on the board of directors of the Ukrainian National Foundation (more on that later in this article). With a position vacated on the Auditing Committee, the UNA Executive Committee unanimously appointed Andrij Gavdanovich as the third member of the UNA Auditing Committee. Mr. Gavdanovich is president of UNA Branch 234 of Eatontown, N.J., and was elected as an advisor on the General Assembly at the 2014 Convention. Olya Czerkas of UNA Branch 381 of St. Petersburg, Fla., and a former UNA advisor (2006-2014), accepted the position vacated by Mr. Gavdanovich. 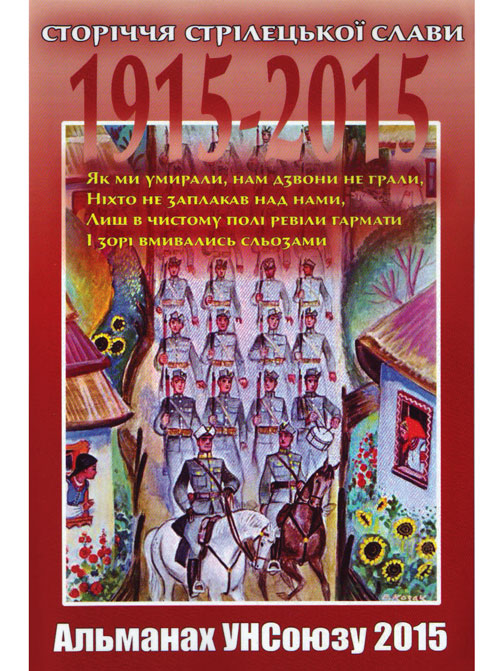 The 2015 Almanac of the Ukrainian National Association, whose cover design by Ihor Pylypchuk features artwork by the renowned Edward Kozak.

In other UNA news, the 2015 Almanac of the Ukrainian National Association commemorated the centennial of the founding of the Ukrainian Sich Riflemen (Ukrayinski Sichovi Striltsi), the first Ukrainian military formation of the 20th century. Another section of the almanac focused on the first anniversary of what has come to be known as the “Revolution of Dignity” that grew out of the Euro-Maidan movement. This was the 102nd annual almanac published by the Svoboda Press for the UNA. The editor of the 2015 almanac is Petro Chasto, a longtime member of the Svoboda editorial staff. A perennial favorite of readers worldwide, UNA Almanacs have been published since 1903. Each one is a veritable treasure trove of information.

The UNA’s Scholarship Program continued to support young UNA members’ dreams. Fifty-six students received a total of $12,465 in scholarships for the 2015-2016 academic year – four of them being awarded special scholarships established by individuals or entities who care deeply about the future of our Ukrainian American community. Photos of the scholarship winners appeared in The Ukrainian Weekly’s September 27 issue. The editorial in that same issue commented on the UNA’s long-standing commitment to youth, as exemplified by the many youth programs and activities it has supported through the years. 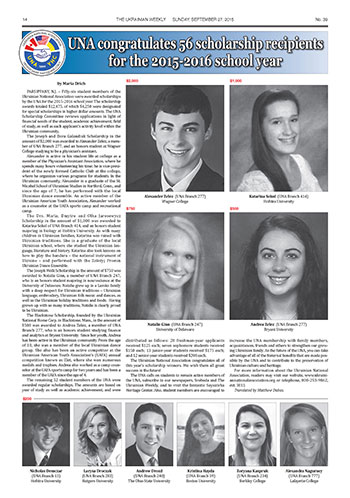 The front page of the special section in The Ukrainian Weekly’s September 27 issue that spotlighted UNA scholarship recipients for the 2015-2016 academic year.

The UNA began a new outreach to the community in 2015, hosting a presentation by Dr. Petrusia G. Kotlar, a well-know chiropractor and alternative health care provider in practice for over 31 years. Her topic, “Wellness and Nutrition as a Means to Healthy Longevity,” was presented at the Ukrainian American Cultural Center of New Jersey on November 21. The UNA Home Office said Dr. Kotlar’s presentation was the first of a series of fraternal events to be hosted and funded by the UNA in an effort to educate local communities and promote UNA insurance and annuity products.

The UNA also had quite a presence on the Ukrainian festival circuit during 2015. As UNA Fraternal Coordinator Yuriy Symczyk wrote on “The Ukrainian National Association Forum” page in this newspaper, “The Ukrainian National Association has been a part of these festivals for decades and continues to support them in keeping with our motto, ‘UNA and the Community – Partners for Life!’ ” As a sponsor and vendor at various Ukrainian festivals, the UNA had a booth and gave visitors UNA goodies, ranging from colorful tote bags filled with an assortment of UNA giveaways, including the UNA magazine, its newspapers Svoboda and The Ukrainian Weekly, and a UNA pen and note pad, to gifts for children. Among the festivals at which the UNA was represented were those in Clifton, Jersey City, Carteret and Whippany, N.J.; Horsham, Pa., and Stamford, Conn. 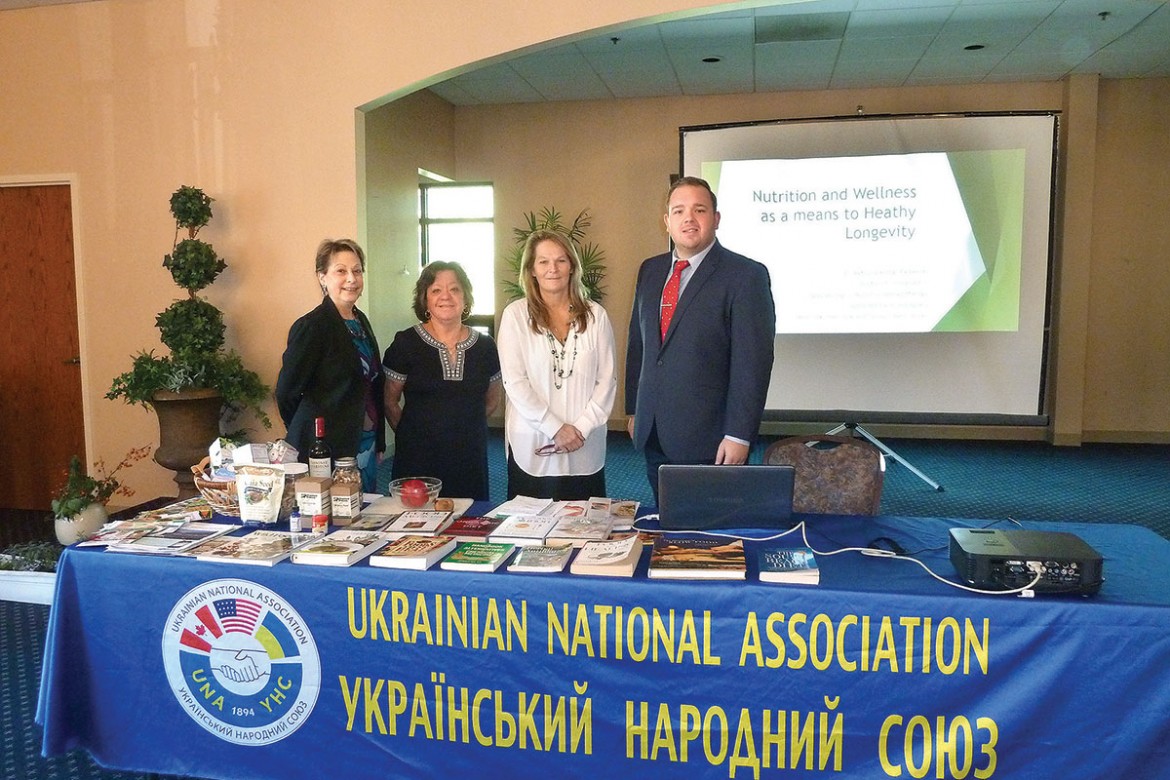 Three representatives of the National University of Ostroh Academy in Rivne, Ukraine, visited the Ukrainian National Association’s Home Office on October 12. Rector Ihor Pasichnyk, Dr. Eduard Balashov, head of the school’s foreign relations department, and Dr. Leonid Yakobchuk, honorary professor at the university, met with the UNA president and then showed a film about the university to UNA officers and employees, including the staffs of Svoboda and The Ukrainian Weekly. Dr. Pasichnyk also presented a certificate of recognition for the UNA’s continuing support of the university and its students.

At the beginning of the year, the UNA announced that, after years of planning and preparation, it had realized its goal of charitable status for the Soyuzivka Heritage Center, as the Ukrainian National Foundation Inc. (UNF), a 501(c)(3) non-profit organization became the owner of Soyuzivka. The UNF, it should be noted, is an affiliated company that performs charitable activities on behalf of the UNA. UNA Treasurer Lisovich explained in a January 25 article: The new status for Soyuzivka “has many advantages, two of them most important: the ability to apply for government and private grants, and the ability to attract higher donor dollars as donations carry a tax-deductible benefit.” She added that a new organizational structure for the UNF “provides the opportunity for the board of the UNF, with help of professional specialists, to develop and implement a concrete development plan for Soyuzivka Heritage Center.”

That same article announced: “In order to increase community involvement in the Ukrainian National Foundation, its board of directors was expanded to seven members, including four independent members representing various segments of the Ukrainian ‘hromada.’ ” The new board of directors of UNF was announced as follows: Mr. Kaczaraj, president; Ms. Lisovich, treasurer; Ms. Kozak, secretary; Roman Hawryluk, Mark Olexy, Dr. Szeremeta and Taras Sochan.

On May 3, Ms. Lisovich reported on Soyuzivka sprucing up for spring and beginning anew. Among the changes: newly paved roads, a new privacy fence at the entrance to the grounds, and new plantings and landscaping. Also before the start of the summer season: buildings were painted, carpets were professionally cleaned, the second-floor patio at the Main House was replaced, the Veselka deck was renovated, and furniture in many rooms was updated. Ms. Lisovich added that other projects, structural in nature and perhaps not as visible to guests, were ongoing. 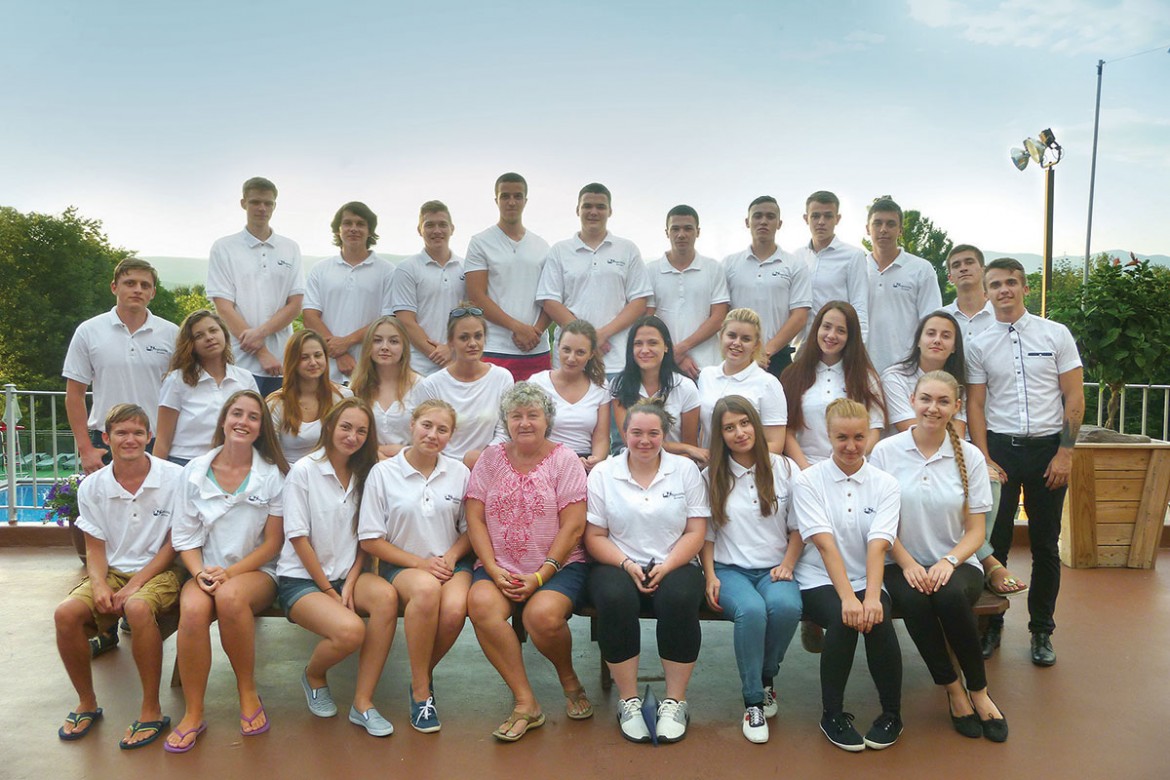 In a photo taken during the summer season, students on the staff of Soyuzivka – the majority of them from Ukraine – are seen with student coordinator Bohdana Puzyk, who happens to be an advisor on the UNA General Assembly.

Some things at Soyuzivka remained the same. The UNA Seniors held their annual week at the heritage center on June 14-19. The Miss Soyuzivka contest took place on August 15, with Ariana Babczenko of Naperville, Ill., a junior at New York University, chosen as Miss Soyuzivka 2016. The runner-up was Viktoriya Mazur of Kerhonkson, N.Y., who was born in the Lviv region and today is a student at Ulster Community College. The Soyuzivka Heritage Center hosted its usual array of camps for children of all ages, and students from Ukraine once again filled the ranks of its summer employees. This year there were 26 students from Ukraine who arrived here under the Work and Travel program offered by the U.S. State Department.

The annual Ukrainian Cultural Festival at Soyuzivka continued its success. The 2015 festival was organized by the Ukrainian National Foundation under the patronage of the Embassy of Ukraine in the United States; it was sponsored by Self Reliance New York Federal Credit Union, the Ukrainian National Association and the SUMA Federal Credit Union (Yonkers, N.Y.). Approximately 6,000 people attended the ninth annual festival, which was held under the theme “Solidarity with Ukraine” on July 10-12. Headliners were Dzidzio, Serhiy Fomenko (Foma), Oksana Bilozir and Pavlo Tabakov, but the three days of entertainment showcased many other performers – musicians, dancers and singers – including the fiery virtuoso violinist Vasyl Popadiuk and two top-notch dance troupes, the Roma Pryma Bohachevsky Ukrainian Dance Workshop and the Lehenda Ukrainian Dance Company from Australia. And there was much more to be seen and experienced at the festival, from performances to dances, vendors and food.

It was also a festival for a cause. To that end, the UNF held a fund-raising gala on Friday night of the festival to benefit the International Alliance for Fraternal Assistance (IAFA) – specifically its project to establish a modern prosthetics and rehabilitation center to help Ukraine’s wounded warriors. The fund for the rehab center is dedicated to the memory of Markian Paslawsky (known to his comrades in arms as “Franko”), a Ukrainian American graduate of West Point who was killed in action in Ukraine on August 19, 2014, during the fierce battle for Ilovaisk. One of the founders of the IAFA, Viktoriia Voronovych, told The Weekly, “Current rehabilitation practices in Ukraine are outdated and inadequate. Our wounded Ukrainian heroes deserve proper longer-term rehabilitation and care for an opportunity to return to a full and active life. This project will help make that happen.” The IAFA had been recognized on March 12 by the Ukrainian Association of Charity Givers as the best local charitable NGO in Ukraine, receiving an award that was presented by Ukraine’s First Lady Maryna Poroshenko. 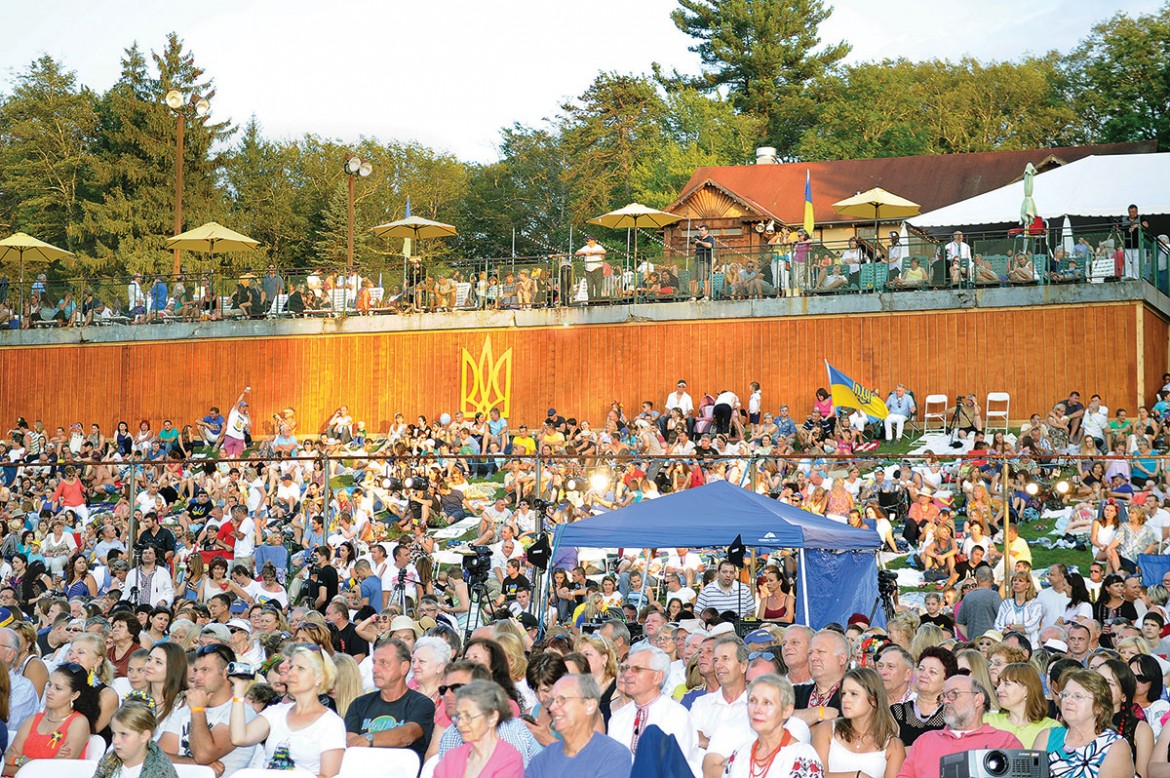 Part of the crowd of thousands who came to the evening concert.