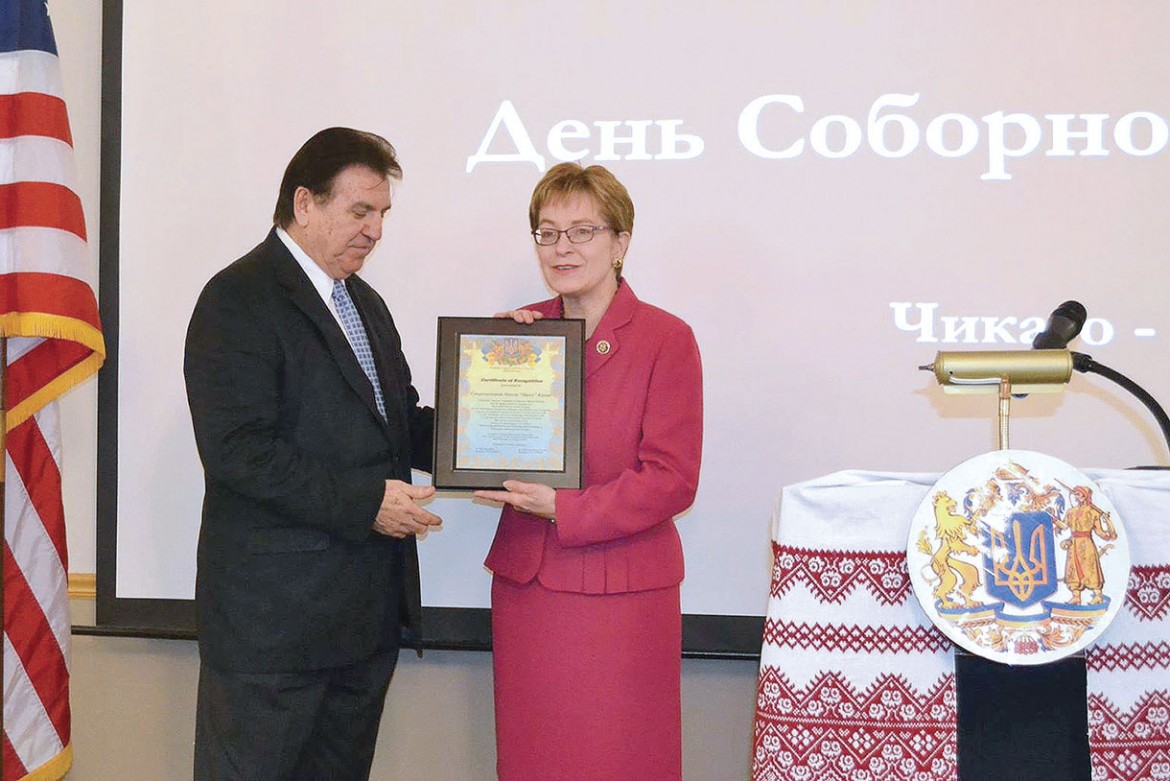 Ukrainians in the United States were active in 2015 with protests, demonstrations, rallies, political and cultural events, as well as anniversaries. Following is a chronological account of the major developments.

The Ukrainian community in Chicago honored Rep. Marcy Kaptur (D-Ohio) on January 25 with an award presented by the Ukrainian Congress Committee of America (UCCA) – Illinois Division at Ss. Volodymyr and Olha Ukrainian Cultural Center, as part of Unity Day celebrations. Joining the celebration were Sen. Dick Durbin (D-Ill) and Reps. Danny Davis (D-Ill.) and Mike Quigley (D-Ill.) who have also been instrumental in supporting U.S. aid for Ukraine.  Other award recipients included Andrew Fedynsky of the Ukrainian Museum-Archives in Cleveland, and Olga Fedak for her many years of service to the UCCA. Showing solidarity with Ukrainians were Robert Rusiecki, deputy consul general of Poland in Chicago, and the honorary consul of Lithuania. Other representatives of the Polish, Lithuanian and Estonian communities also attended the event.

The fallen heroes of the Revolution of Dignity were commemorated with a vigil and memorial service at Ss. Volodymyr and Olha Ukrainian Catholic Church on February 22 in Chicago’s Ukrainian Village neighborhood. Hundreds also gathered to mark the one-year anniversary of the end of the Euro-Maidan protests and the Heavenly Brigade’s sacrifices. Also present were clergy of the Ukrainian Orthodox and Ukrainian Catholic Churches, as well as representatives of the Lithuanian and Georgian communities. The local Ukrainian organizations, including UCCA-Illinois and Orange Wave, had organized a presentation and a gathering with Sen. Durbin, co-chair of the Senate Ukraine Caucus. The Consulate of Ukraine in Chicago sponsored a meeting with former president of Lithuania, Prof. Vytautas Landsbergis, who underscored the parallels between Ukraine’s and Lithuania’s struggles for independence from Russia. 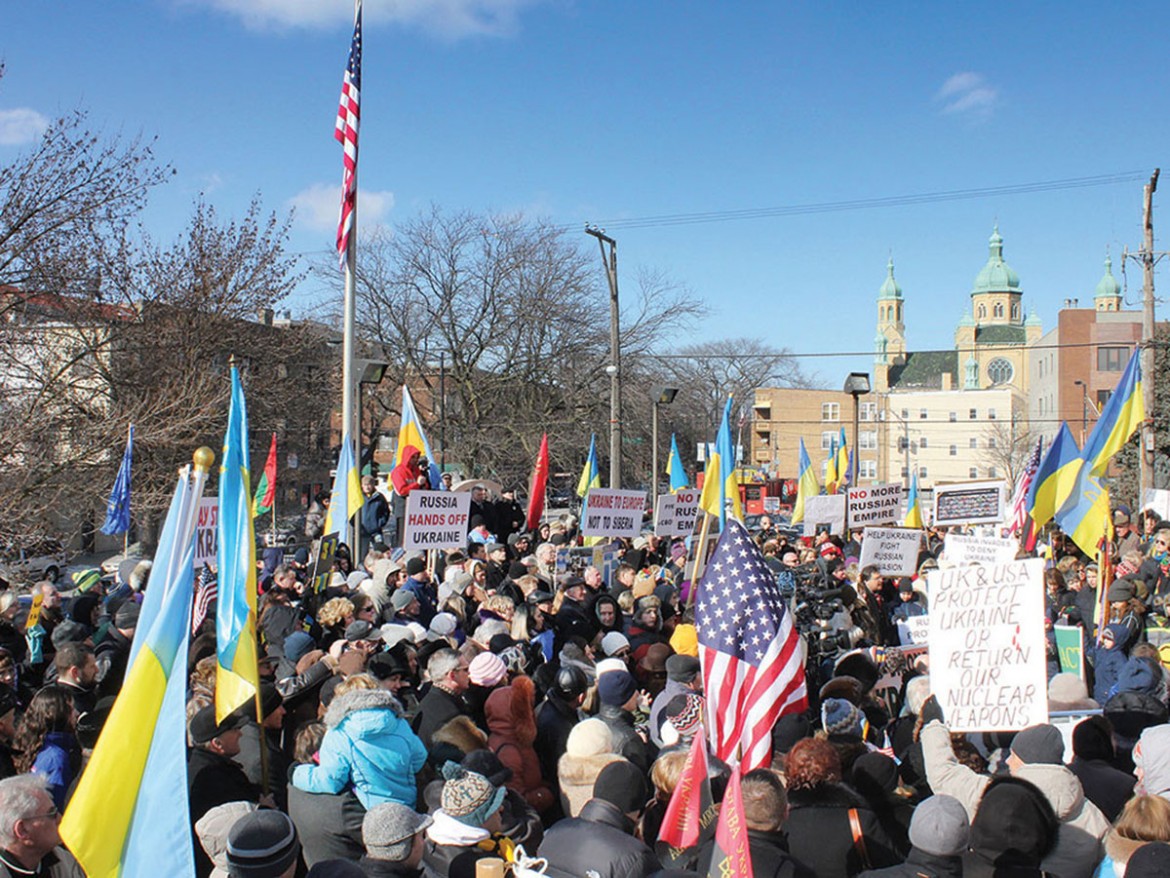 The Chicago vigil in memory of the Heavenly Brigade.

On January 30, the Ukrainian Institute of America in New York hosted an evening fund-raiser “Invisible No More: Orphans and Street Children in Ukraine,” that was co-organized by Sublimitas, Razom and New Ukrainian Wave. There was a screening of the documentary film “Bomzhi” (“The Homeless,” 2012). Keynote speaker, Ambassador of Ukraine to the United Nations Yuriy Sergeyev, noted the challenges facing Ukraine’s orphans and street children, and expressed his strong support of the Sublimitas mission and programs. Alla Korzh, director of Sublimitas, explained in greater detail how as many as 150,000 street children and more than 94,000 orphans live in Ukraine.

Ukrainian Americans converged on Washington on March 4 as part of the Ukrainian Days advocacy events that were organized by the Ukrainian Congress Committee of America, with its Washington bureau, the Ukrainian National Information Service. During the meetings, constituents met with their respective representatives in the House and Senate to thank them for the support of the Ukraine Freedom Support Act that was signed by President Obama on December 18, 2014, and to explain the current situation in Ukraine, with regard to military and humanitarian needs, as well as the plight of prisoners of war held by Russia, including Ms. Savchenko. Nearly 50 community activists were able to attend a hearing of the House Foreign Relations Committee, titled “Ukraine Under Siege,” with testimony by Assistant Secretary of State for European and Eurasian Affairs Victoria Nuland.

Hundreds gathered on March 9 at the Ukrainian National Home in Hartford, Conn., to hear an address by Sens. John McCain (R-Ariz.) and Chris Murphy (D-Conn.) and share their concerns about the situation in Ukraine. “Putin is attempting not just to break Ukraine,” Sen. Murphy said. “He is trying to break Europe, to break the trans-Atlantic alliance, and if he is not stopped there, then we have no idea what the end point will be. We believe that this is one of the greatest threats that the world order has ever faced…” A lively question-and-answer session was held, during which the senators broke from the podium and greeted the two young Ukrainian veterans, Roman Lutsiuk and Roman Dzivinskyi, who were receiving medical treatments at Yale-New Haven Medical Center and in Philadelphia. During the close of the program, Sen. McCain was awarded the UNIS Friend of Ukraine award. 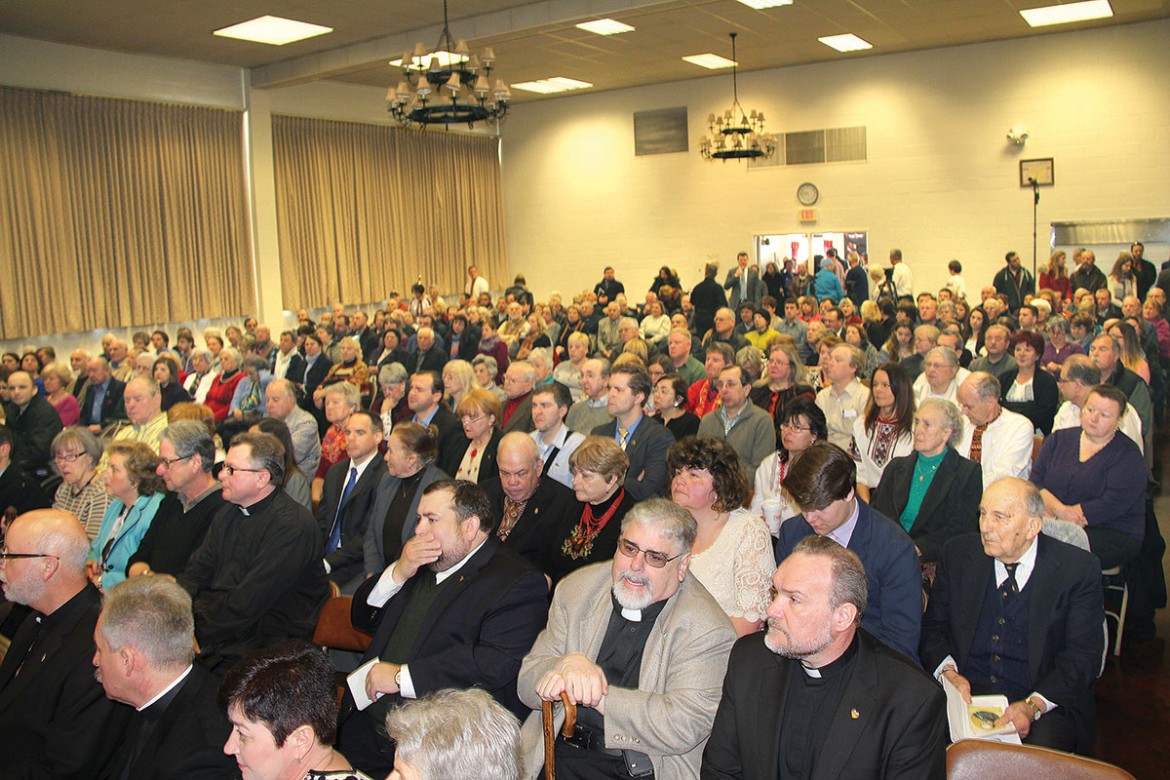 On March 26, nearly 300 people – Ukrainians, Latvians, Georgians, Armenians, Estonians, Belarusians, Poles and Circassians – gathered in front of the White House to rally for military aid for Ukraine. Noted speakers at the event included Rep. Bill Pascrell (D-N.J.), Ambassador John Herbst of the Atlantic Council’s Dinu Patriciu Eurasia Center, and Diana Vidutis, president of the District of Columbia Lithuanian American Community. Appeals were made for military aid for Ukraine’s soldiers by Ivan Rodichenko of the Kyiv-Rus’ 25th Volunteer Battalion, and Roman Volytsky, who had worked to gather donations for the soldiers.

The Ukrainian National Women’s League of America hosted a briefing on the Savchenko case during a meeting at The Ukrainian National Museum on April 20. The presentation was led by the imprisoned pilot’s lawyer, Mark Feygin, and Maria Savchenko, Nadiya’s mother. During the previous week, Mr. Feygin was working in Washington with the Congressional Ukrainian Caucus and Sen. McCain, among others, to promote Ms. Savchenko’s prisoner of war status.  Mrs. Savchenko explained her daughter’s patriotic spirit and courage.

Kyiv Mayor Vitali Klitschko met with the local Ukrainian community during a working lunch meeting hosted by the Ukrainian Congress Committee of America at the Ukrainian East Village Restaurant in New York on April 26. Key topics raised by both the community and Mr. Klitschko were: the rampant corruption that hinders reforms, the nearly 2 million internally displaced people within Ukraine as a result of Russia’s invasion of Ukraine, and the need to combat Russian disinformation.

The UCCA also met with Mejlis Chairman Refat Chubarov on April 28 at the UCCA office in New York. The small gathering of local community leaders discussed the situation of Crimean Tatars in Ukraine and in occupied Crimea. Mr. Chubarov was in town for the 14th session of the United Nations Permanent Forum on Indigenous Issues. Ayla Bakkali, U.S. representative of the Crimean Tatar Mejlis, helped arrange the meeting. Mr. Chubarov explained that 20,000 Crimean Tatars had been displaced from Crimea, half of whom were internally displaced within mainland Ukraine. Arguing for tougher sanctions against Russia, Mr. Chubarov also called for increased military aid for Ukraine. He thanked the Ukrainian American community for its advocacy on these issues and reminded it to include Crimea in its discussions.