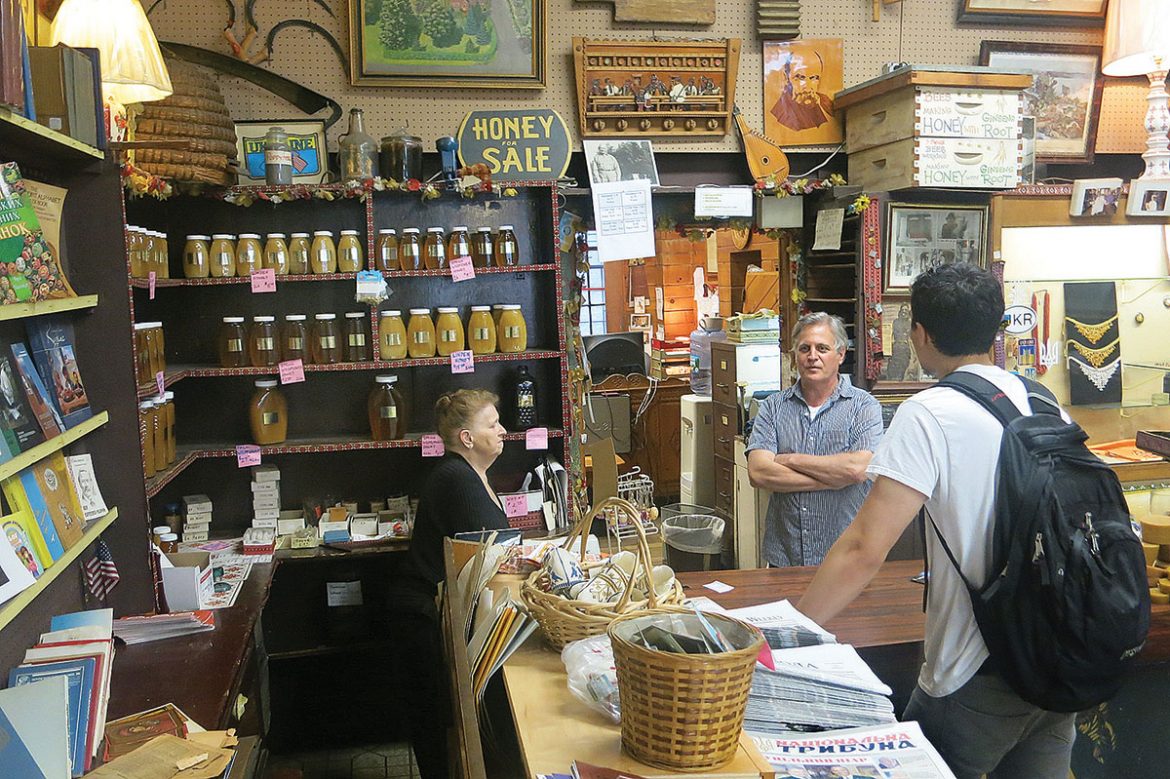 Markian Surmach (center) and Stephanie Czerepanyn (left), who has worked at Surma since 1978, speak with Noah Remnick of The New York Times.

NEW YORK – The end of an era, some have called it, but then again nothing stays the same forever. Whatever we tell ourselves, the closing of the Surma Book & Music Company “The Ukrainian Shop” on Seventh Street is a tough one to process.

Markian Surmach, the third-generation owner of the store and grandson of the store’s founder, Myron Surmach Sr., spoke with The Ukrainian Weekly on June 3, to break the news directly to the readers.

We began our conversation where the last one left off, in April 2015, when Mike Buryk wrote in The Weekly: “I asked Markian how long Surma would last. ‘As long as my personal interest in Ukraine continues and evolves,’ he said, ‘Surma will be here.’”

Referring to that 2015 statement from just over a year ago, this writer asked: What has changed and why? Mr. Surmach said: “My cultural and heritage roots are as strong as ever, but reality being as it is, the increasing costs of running the store, as well as limited personal time for family have been the main motivating factors in this decision.” 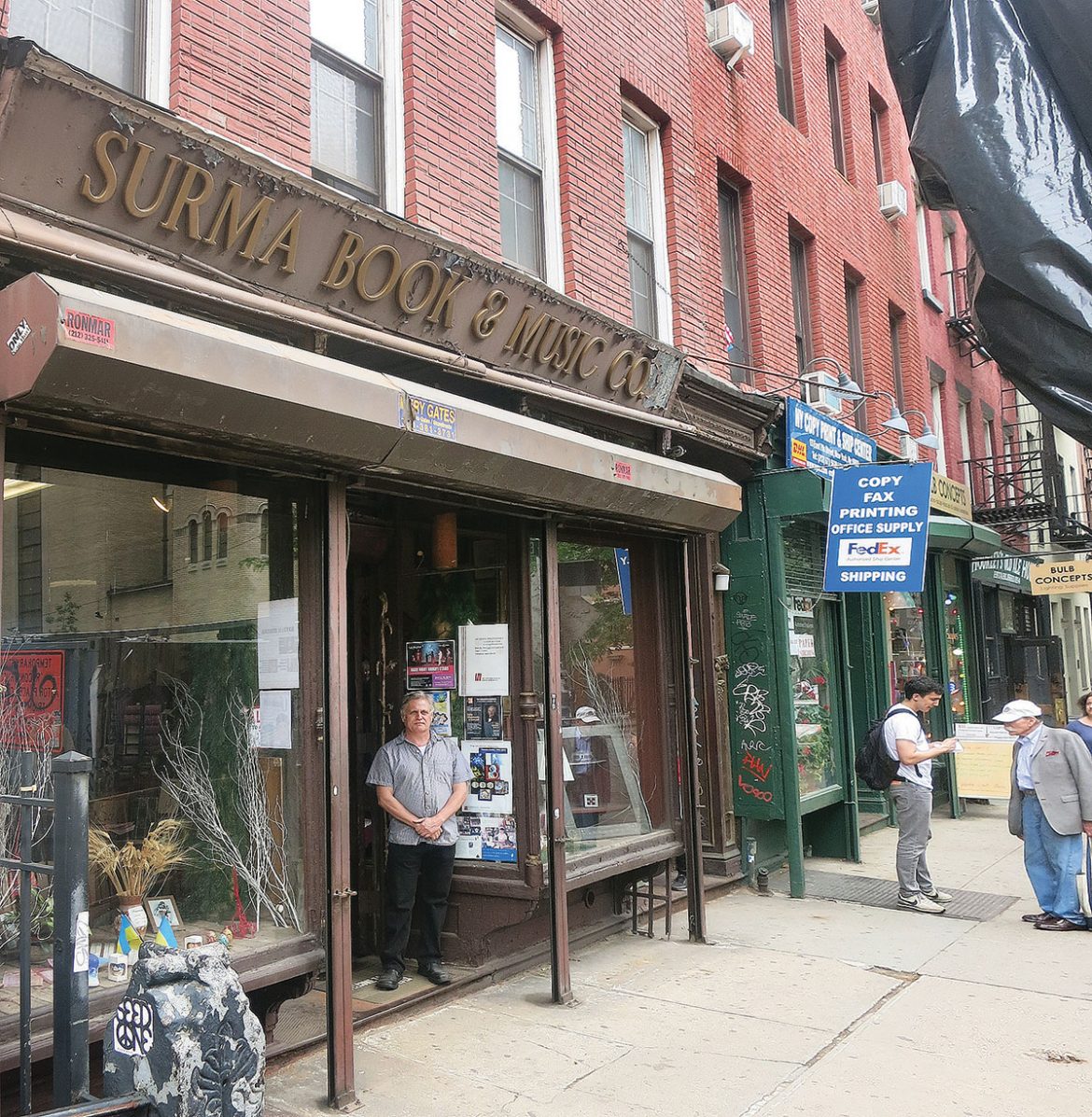 Markian Surmach takes a pose in front of Surma, the store founded by his grandfather.

“It has been difficult to watch as the store shelves empty day by day. There is a sadness but also a need to fight the urge to re-order those items,” he mused.

In speaking in his office area, Mr. Surmach has many items decorated by his aunt, Jaroslawa Surmach-Mills, including a Petrykivka-decorated kitchen hood. Many examples of her artwork were either on display or for sale. “Her presence is still felt in this place,” Mr. Surmach added.

The public’s initial reaction to news of the store’s closing was a resounding “No!” And Mr. Surmach added that everyone has an opinion or idea, and speaking with individual customers is difficult for both sides. “We even had a phone call from a Ukrainian store in Minnesota that wanted to confirm the news, and they expressed shock.”

Surma has supplied Easter supplies (beeswax, dyes and styluses/kistky), embroidery, books and assorted items, many from Ukraine – which began to be stocked by Myron Surmach Jr., who took over from his father after his service in the U.S. Navy in the second world war.

Surma’s suppliers from Ukraine were also saddened by the news of the store’s closing, and summarized it, “The closing of Surma or any longtime store reminds people of their own mortality – an end of an era,” Mr. Surmach recalled. 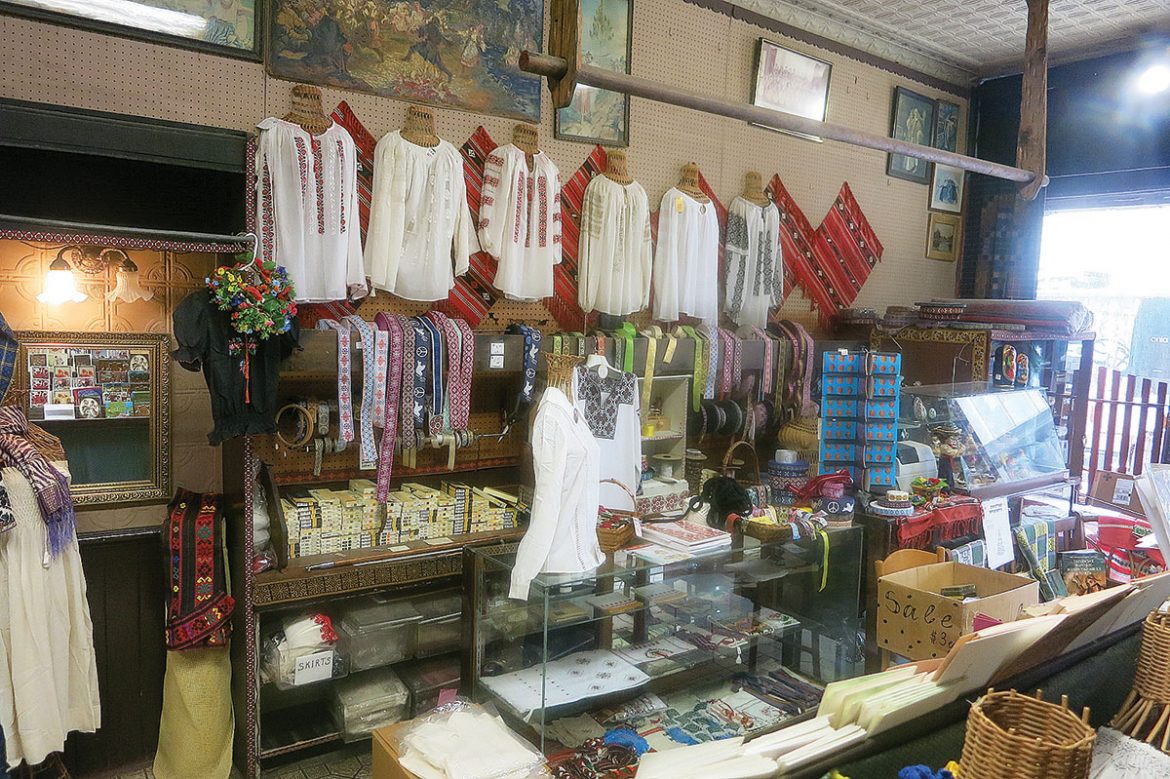 Surma was founded in 1918 by Myron Surmach Sr. after he arrived in the United States via Ellis Island in 1910 after leaving his family in Zheldets in the Lviv region of Ukraine. Myron’s older brother had arrived a year earlier and invited Myron to come to America. After working in New York for nearly a year, Myron Surmach opened Surma to sell books and gymnastics clothes to the local gymnastics club run by the Czech community.  The store’s location in New York has shifted a few times since its founding, but has remained on Seventh Street since the 1960s.

Markian Surmach told Mr. Buryk in 2015: “My grandfather offered services to the Ukrainian immigrant community to help them become Americans. He would read letters to them in the store and offer other services. Later on, he added a variety of goods, including appliances, such as washing machines, radios and phonographs.” A dust-covered Victrola phonograph still sits on a high shelf in one of the shop’s corners.

Now he told The Weekly: “During the store’s closing, this was the first time that I can recall that Surma had a sale, and it has been a last lesson, that has increased attention to the store.” 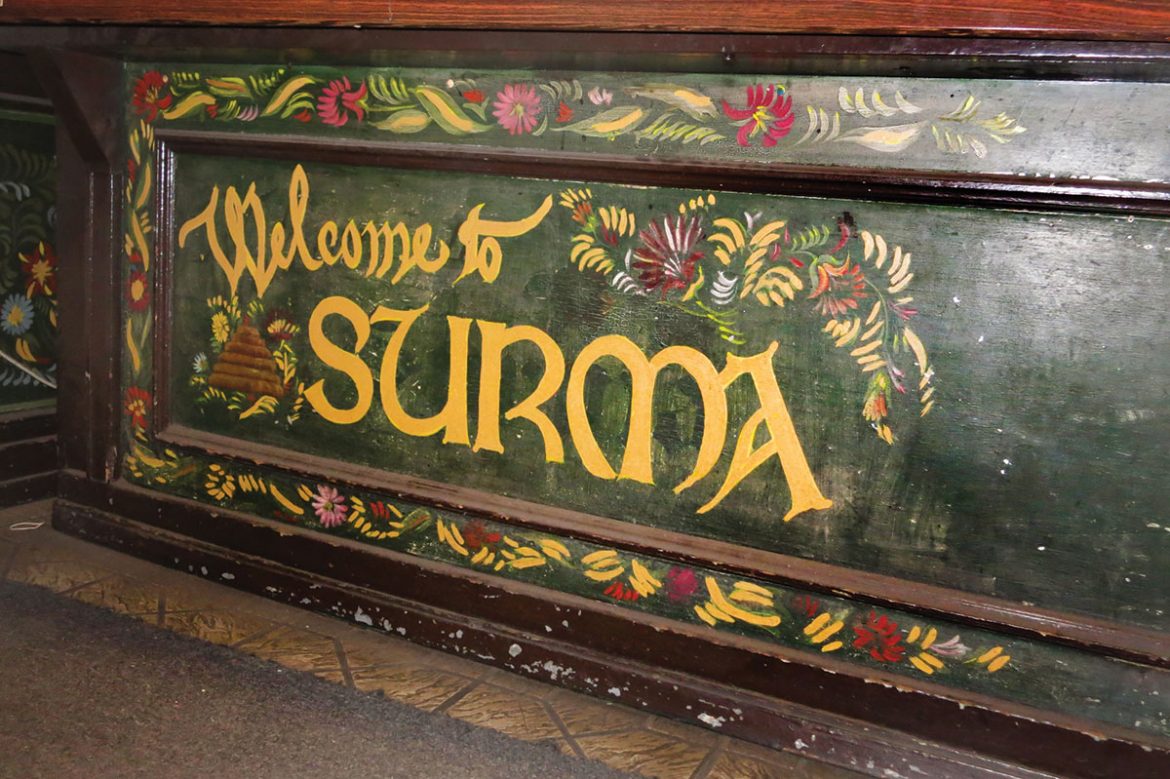 In front of the counter and register, this artwork by Jaroslawa Surmach-Mills welcomes customers to Surma.

Life after Surma for Mr. Surmach will focus on his family, and he plans to remain in New York City. With a freer schedule, he did not rule out the possibility that he may continue Surma in the future at another location.

For the people who count on Surma for their books, like the local Ukrainian language schools, the loss will be more acutely felt in the fall when school sessions resume and a new source for those books is sought. Mr. Surmach said he was taken aback by this reminder of the impact from the store’s imminent closure.

The timing of the decision, as this writer told Mr. Surmach, has the diaspora and Ukraine in a parallel state of transformation. As the Ukrainian neighborhood in New York, like so many others, is in a state of transition, Ukraine is also undergoing a transformation and is taking its place on the global scene. 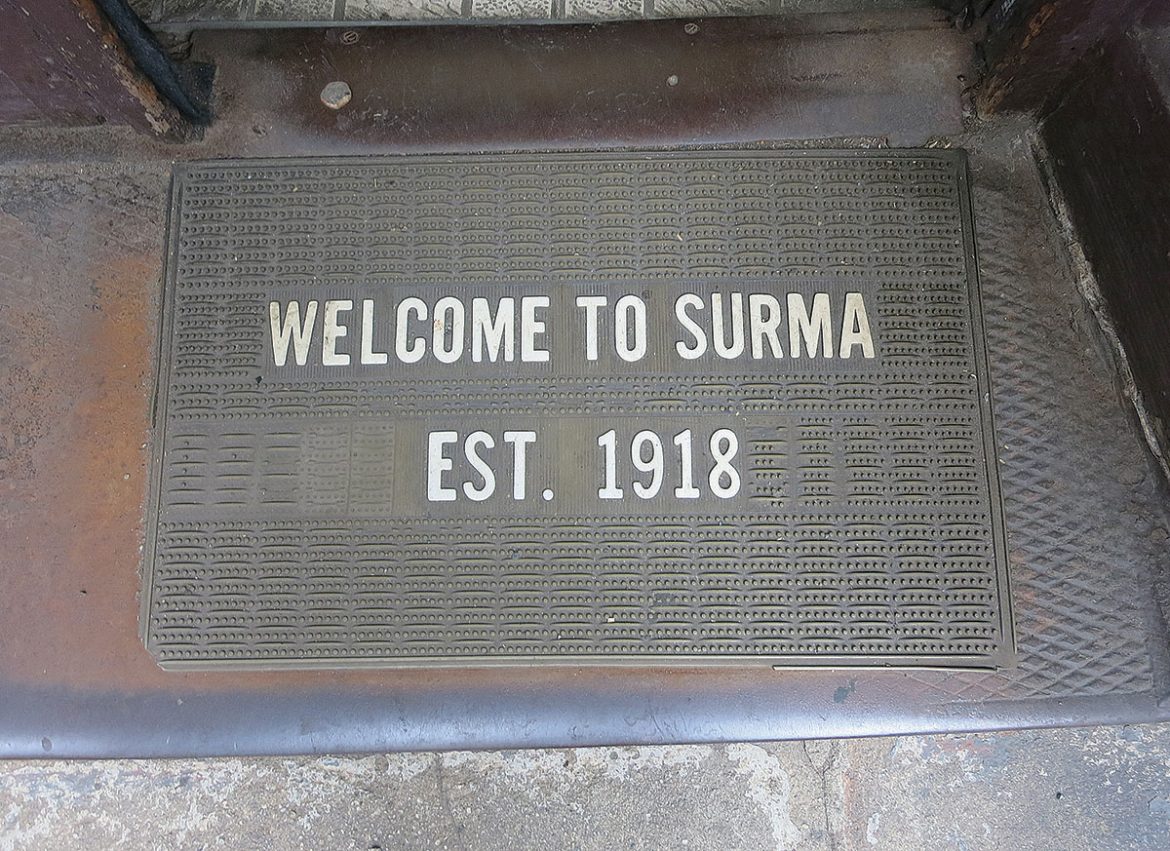 The welcome mat outside of the Surma shop.

The reality is that the East Village neighborhood – known affectionately as “Little Ukraine” – has seen an increase in the closing of Ukrainian-owned shops, from the Kiev Restaurant (founded in the 1970s and closed in 2000) to Kurowycky’s Meat Market in 2007 (after 52 years in business).  Surma is simply the latest casualty in the changing landscape of New York’s neighborhoods. 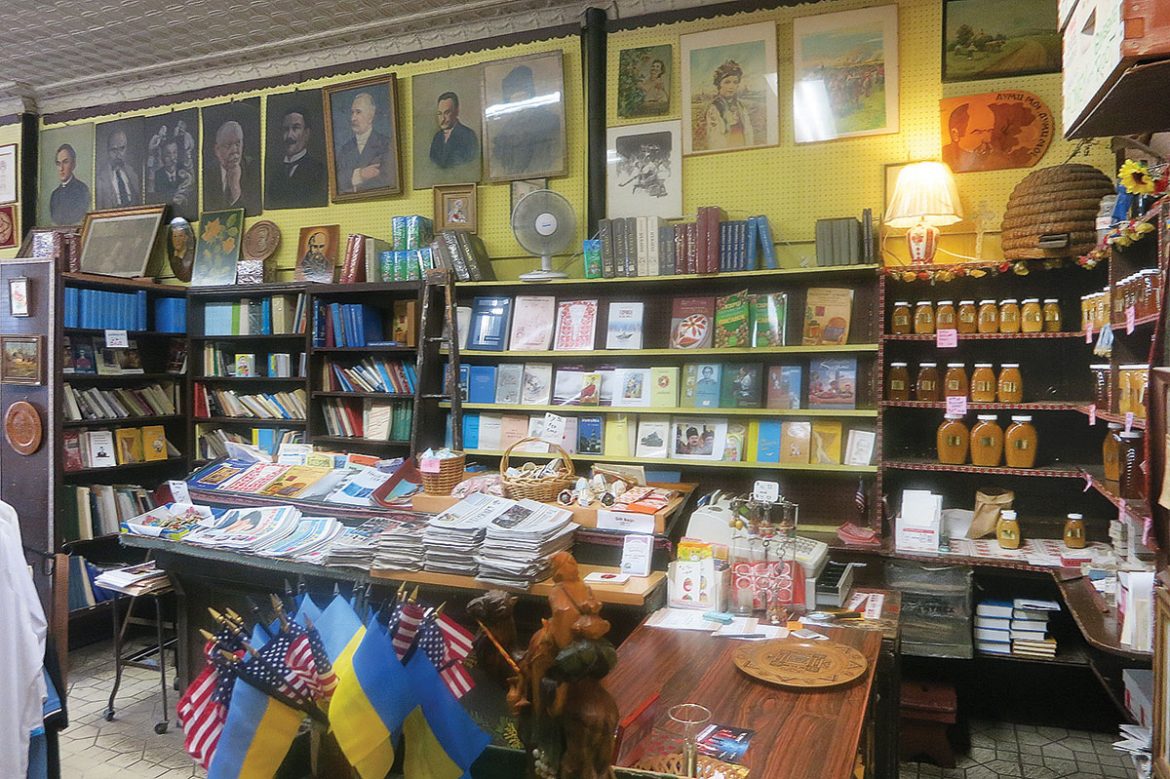