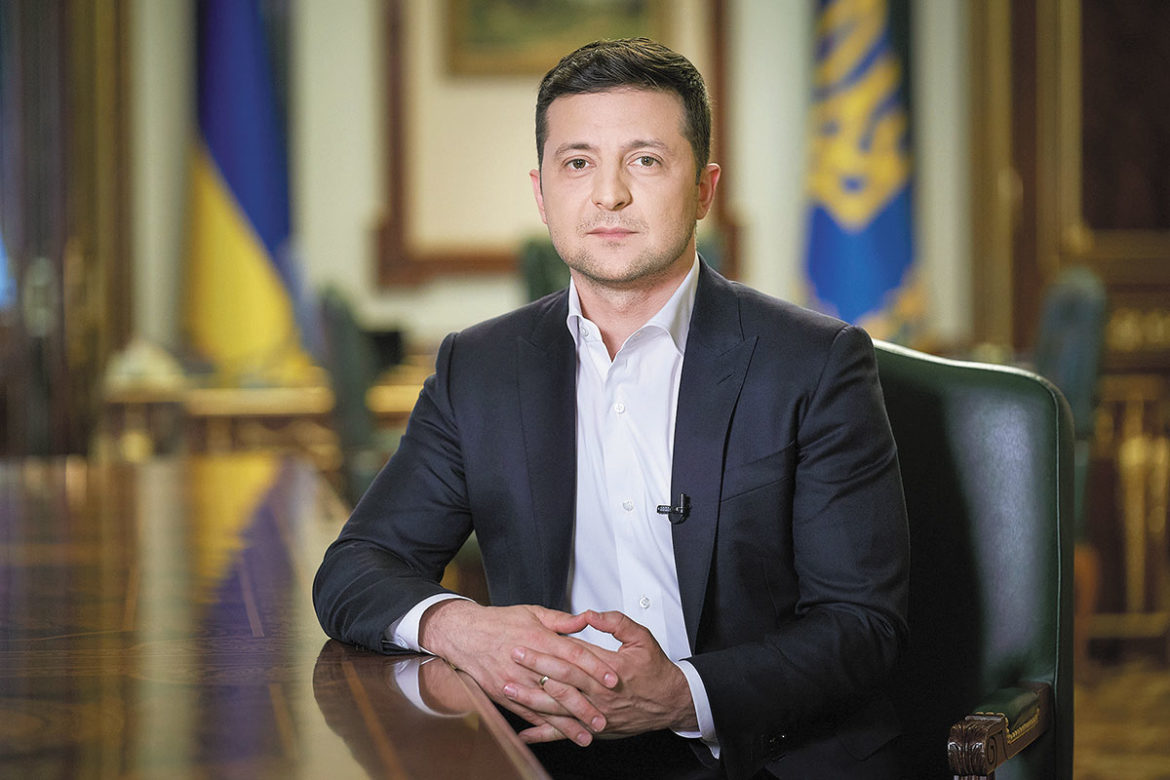 Volodymyr Zelenskyy, a year after being elected president of Ukraine.

KYIV – On April 21, 2019, Volodymyr Zelenskyy was elected president of Ukraine in a landslide victory that was seen by his supporters as a victory for the forces of change over the old order and its ways.

But the response to the first anniversary of his presidency was a muted one, reflecting the difficulties the new administration has run into and increasingly created for itself. It was overshadowed by the unexpected news the following day that President Zelenskyy had decided to add the former Georgian president-turned-controversial Ukrainian politician Mikheil Saaka­shvili to his team as a vice prime minister responsible for reform.

Whatever the motives behind this move by a still relatively new president who has become known for his impulsiveness, it proved to be a miscalculation. Mr. Zelens­kyy failed even to secure a sufficient number of votes within his own Servant of the People party for Mr. Saakashvili’s approval from the Parliament. The issue had to be placed on hold and eventually, on April 30, the head of the faction, David Arakhamia, announced that the president would be offering Mr. Saakashvili an alternate post.

This embarrassing fiasco has been followed by other worrying developments. They involve actual or potential changes of key officials occupying sensitive posts as far as Western confidence in Ukraine’s reform process is concerned and, related in this regard, further delay in adopting a critical law about in the enduring standoff with the rogue oligarch Ihor Kolomoisky about what happens after embezzled banks are nationalized.

The quarantine constraints resulting from the coronavirus pandemic allowed President Zelenskyy to forgo a press conference to discuss his first year in office. Instead, the Presidential Office prepared a TV video aimed at highlighting what it considers his achievements.

Observers generally concluded that the president and his team, because of a mixture of adverse circumstances, inexperience and serious defects in his managerial team, failed to live up to the expectations that have been generated and to deliver on the promises that had been made during Ukraine’s presidential and parliamentary elections last year.

The results have indeed been modest, but they should be rated against the circumstances in which the Zelenskyy administration had to operate. In fact, many of the president’s supporters continue to give him the benefit of the doubt and his ratings remain reasonably healthy.

Laws providing for the lifting of immunity from prosecution of national deputies and on the impeachment of the president were adopted; a diluted “historic” law lifting the ban on the sale of farmland was passed; a new electoral code was approved, which should result in more open and less corrupt elections for a significantly reduced number of seats in the Verkhovna Rada; and criminal responsibility for illegal enrichment was restored.

Mr. Zelenskyy has also managed to inject some new impetus into negotiations on ending the war with Russia in the Donbas and to secure the release of scores of Ukrainian prisoners held by Russia.

So why did President Zelenskyy suddenly gamble at this stage on bringing Mr. Saakashvili out of political oblivion? After all, the headstrong Georgian has thrived on his reputation of being a loose cannon. He had not sought to conceal his disappointment with being overlooked by the new president last year and eventually began criticizing him for failing to deliver on the reforms he had promised.

For all his impressive achievements as president of Georgia, Mr. Saakashvili did not manage to adjust smoothly to the realities of Ukrainian politics and its oligarchic set-up. Used for political purposes and then dropped unceremoniously by former President Petro Poroshenko, he made enemies not only of him, but of former Prime Minister Arseniy Yatsenyuk, Minister of Internal Affairs Arsen Avakov and the likes of Mr. Kolomoisky, other oligarchs and crooked regional bosses, especially the Odesa Mayor Gennadiy Trukhanov.

Nevertheless, as a passionate communicator, Mr. Saakashvili has retained the image in some quarters both at home and abroad as a politician committed to promoting reform and modernization, and fighting corruption. Indeed, he lost no time in announcing that President Zelenskyy wanted him to deal directly on his behalf with the International Monetary Fund and that he would be asking the IMF for far more than it was proposing to give to Ukraine at this stage.

The general consensus among observers is that, after a year at the helm, Mr. Zelenskyy is experiencing a major crisis with cadres, that is, in finding qualified, experienced, untainted and reliable professionals to fill key responsible posts. His initial ad hoc reliance on inexperienced enthusiasts proved illusory. At the beginning of March, he dismissed two-thirds of the Cabinet of Ministers, including his hand-chosen prime minister, Oleksiy Honcharuk, for failing, as he put it, to produce the results expected of them.

Firing, however, is far easier in the present Ukrainian context than hiring. Finding the right people a year later, after experiments with self-reliance on individuals from within his own limited inner circle and misplaced confidence that having a majority of seats in the Parliament would enable him to move forward with changes in a “turbo-regime,” has turned into a daunting challenge. Moreover, in conditions where corruption is supposed to be carefully monitored and top officials have had to accept cuts in their salaries because of the difficult economic situation, the incentives to serve in the government are not what they used to be.

Consequently, Mr. Zelenskyy and his team have had to throw out the net much wider in the hope of catching some big fish needed, including also those who served in the discredited administration of Viktor Yanukovych. It has been confirmed for instance that the experienced politician with an economic specialization, Serhiy Tihipko, who was co-opted into the Party of Regions, turned down an offer from Mr. Zelenskyy to become prime minister after Mr. Honcharuk’s sacking.

It appears that Mr. Saakashvili’s candidacy as a new ally to bolster an administration that has shown signs of running out of steam was proposed by the head of Mr. Zelenskyy’s Presidential Office, Andriy Yermak. He and Mr. Saakashvili go back to student days. Since Mr. Yermak took over from the bullish Andriy Bohdan in February as Mr. Zelenskyy’s chief of staff, the problems the administration has had to face seem suddenly to have multiplied.

Mr. Yermak himself is implicated in a serious scandal involving his brother that has yet to be properly addressed. He also prefers to deal with foreign relations, especially negotiations with Russia, and might, therefore, prefer that Mr. Saakashvili assume the kamikaze role of a battering ram on the reform front and take on the delicate task of interfacing with foreign creditors.

But the Saakashvili issue has been compounded by other developments, perceived by many as shocks, that have also eroded confidence. On April 24, without any prior warning, an emergency session of the Cabinet of Ministers of Ukraine fired the head of the Customs Service, Max Nefyodov, his deputies, and Ukraine’s Tax Service chief, Serhii Verlanov. Messrs. Nefyodov and Verlanov both have reputations as reformers. Furthermore, there are indications that preparations are under way in the Parliament to remove the head of the National Anti-Corruption Bureau, which has been investigating embezzlement cases involving Mr. Kolomoisky and others.

Mr. Zelenskyy is now faced with growing criticism from within the ranks of his own former appointees and parliamentary faction. Those challenging his decisions and strategy include Mr. Honcharuk, former Prosecutor General Ruslan Ryaboshapka, Mr. Verlanov and Mr. Nefyodov. At the same time, deputies within Servant of the People loyal to Mr. Kolomoisky appear to have become emboldened and are openly challenging Mr. Zelenskyy’s line.

Despite promises to open up the system, a year after Mr. Zelenskyy took over Ukrainian politics remain as closed and Byzantine as ever. Whatever adjustments are being made behind the scenes as Mr. Kolomoisky plunges the country further into an “all or nothing” confrontation, and other oligarchs such as Rinat Akhmetov seek to hold their ground in other ways, the signs are not encouraging. They are also hardly the signals that are expected from Kyiv at this time when Ukraine is looking to the IMF and others to help it through this extremely difficult time.

Ukraine is currently facing a combination of three immense challenges: the coronavirus pandemic, the continuing war with Russia and staving off economic collapse. The president continues to put on a brave face, but the signs of crisis, especially as regards damage management and proper communication with the population, and for that matter with Ukraine’s external creditors and supporters, are all too evident.

The question is: Have President Zelenskyy and his team run out of steam, have they been hamstrung by open or veiled resistance of vested interests and hostile forces, or are they simply not up to the task?