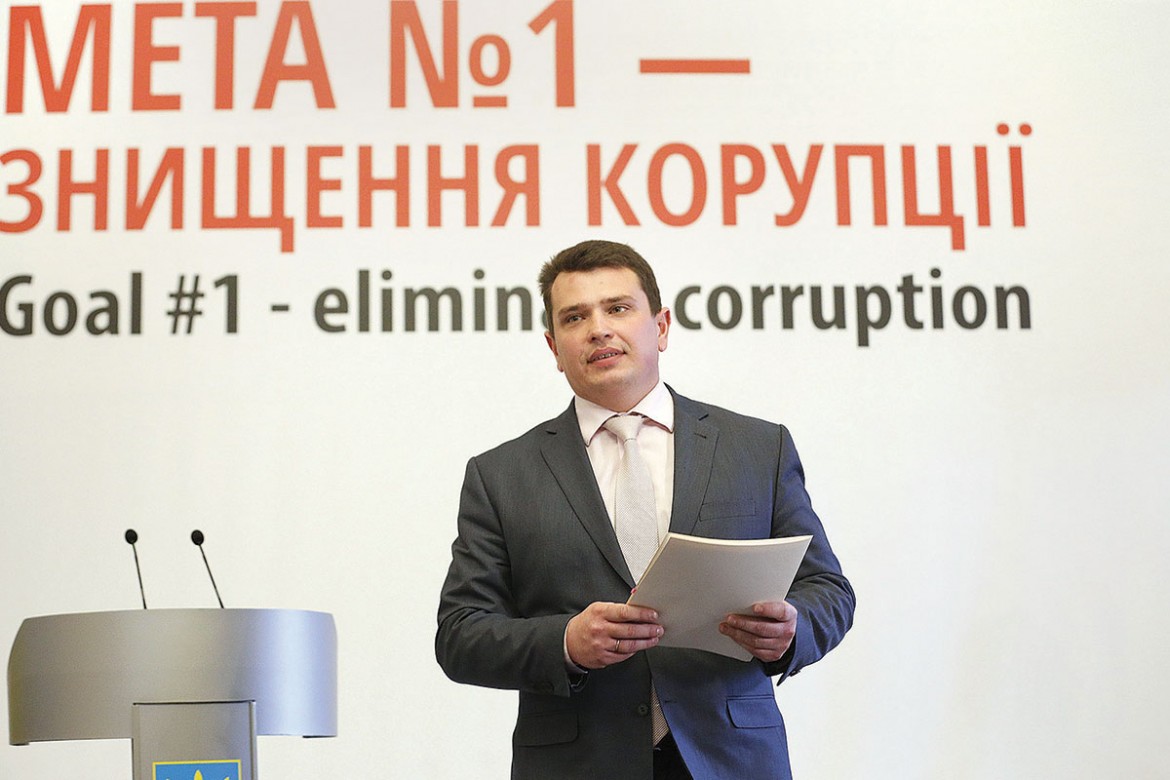 Artem Sytnyk, a 35-year-old former investigator for the Kyiv Oblast prosecutor’s office, was named on April 16 to head the newly created National Anti-Corruption Bureau of Ukraine.

KYIV – The National Anti-Corruption Bureau of Ukraine was finally launched on April 16 by President Petro Poroshenko at a ceremony in which he revealed its first head will be Artem Sytnyk, a 35-year-old former prosecutorial investigator who has distinguished himself with investigations that led to incarcerations.

The announcement came after months of delay in creating the bureau – with Mr. Poroshenko promising its launch as early as January – and criticism that the government wasn’t doing enough to address corruption, which is estimated to have cost the state hundreds of millions of hryvni in 2014, following the bloodshed on the Euro-Maidan. Few know what to expect from the political novice.

“Everything’s in the hands of the new chair. He has time, society’s support and healthy forces,” said Mustafa Nayyem, a national deputy with the Poroshenko Bloc. “Mr. Sytnyk can go down in history as the first fighter against corruption, who was able to put behind bars top-tier officials, from ministers to judges, prosecutors, etc. Or he can become yet another inglorious official from the dark masses.”

Mr. Sytnyk has exceptional authority – with influence rivaling other top law enforcement officials – in accordance with legislation approved by Parliament in October 2014 that created the bureau and then amended in February of this year.

His task is to lead the uncovering of crimes at the highest levels of government and conduct pre-trial investigations, without any politician having the legal authority to interfere with the bureau’s work. He also has the authority to seize funds determined to have been illegally obtained.

At the same time, Mr. Sytnyk will have to report on the bureau’s progress to the Verkhovna Rada, the Cabinet of Ministers and the president, who retains the authority to dismiss him, along with Parliament, but only based on an international audit.

He’s expected to lead the bureau, with its 700 employees, in coordinating its work with other law enforcement authorities, including those abroad. The 2015 budget earmarked 300 million hrv ($13 million) for the bureau.

Mt. Sytnyk emerged from an intense three-month selection process that involved 176 applicants. A committee that included Dr. Yaroslav Hrytsak of the Ukrainian Catholic University and European Anti-Fraud Office Director-General Giovanni Kessler narrowed the field to two candidates who were presented to President Poroshenko for his selection.

The other finalist was Mykola Siryi, a 52-year-old native of Russia who spent most of his career as a lawyer in Kyiv, serving on various councils and commissions.

Yet Poroshenko Bloc National Deputy Serhiy Leshchenko said his inexperience is an advantage, as it was for the Latvian Anti-Corruption Bureau Head Aleksejs Loskutovs, who told him he enjoyed political independence as a result.

“I’m already being asked for his telephone number and I simply don’t know it! Is that good or bad?” Mr. Leshchenko commented to the uapress.info news site. “I wish for the new director of the anticorruption bureau to ruin our traditional skepticism.”

In turn, Mr. Sytnyk said three days later that he will start with Ukraine’s notoriously corrupt judiciary, “starting with the higher judges [and proceeding] to the lower ones.” At the same time, the bureau’s priority includes “officials at the highest echelons of power,” he told the Inter television network, adding that corruption “is about as high in all bodies.”

In 2011, he quit his post in what he cited as “disagreement with the political regime of [Viktor] Yanukovych, the criminalization of law enforcement bodies, curtailment of the fight against corruption, absolute unprofessionalism and collusion with the regime by the Kyiv Oblast prosecutor at the time.”

At this point, he joined a law firm whose partners include Yurii Haisynskyi, whose son-in-law is Kharkiv City Council Chair (Mayor) Gennady Kernes, who is widely accused of corruption. Mr. Kernes currently faces criminal charges for the kidnapping and torture of Euro-Maidan protesters.

Mr. Sytnyk told the Nashi Hroshi television program on April 17 that he’s no longer a partner in the firm and doesn’t have business with Mr. Haisynskyi.

Mr. Sytnyk also stands accused by numerous deputies of serving as defense counsel for the scandalous prosecutor Volodymyr Babenko, who they allege covered for the theft of the corpse of murdered journalist Heorhii Gongadze from a Kyiv Oblast morgue, as well as allegedly covered for the illegal early release from prison of former National Deputy Viktor Lozinskyi, who was convicted of murder.

Another matter drawing the attention of skeptics was Mr. Sytnyk’s declaration that he earned 23,500 hrv (about $2,000) for all of 2014. Yet selection committee members said that claim passed scrutiny. For instance, his wife earned 113,000 hrv (about $9,400) to help support their family of four. The couple also had income from other business dealings.

Mr. Sytnyk’s appointment comes at a time when new corruption scandals surface every week. Most recently, the Security Service of Ukraine (SBU) accused the leadership of State Food and Grain Corporation of Ukraine, led by acting board chairman Valerii Tomilenko, of stealing $500,000 by purchasing corn at inflated prices from a European supplier.

The biggest corruption scandal this year erupted when Mykola Hordiienko, the former head of the State Financial Inspection of Ukraine, accused Prime Minister Arseniy Yatsenyuk in mid-March of protecting and benefitting from corruption schemes that existed under the Yanukovych administration.

He said he was placed on leave by Mr. Yatsenyuk when reporting on these schemes and dismissed on April 4. The prime minister dismissed the accusations as lies paid for by the political opponents of the government, which was engaged in its own anti-corruption efforts.

Current Agriculture Minister Oleksii Pavlenko reported that the ministry’s post-Maidan leadership in 2014, including former Minister Ihor Shvaika of the Svoboda party, allowed officials at state enterprises to deprive the state of hundreds of millions of hryvnia through various corrupt schemes.

The corruption extended wider, said Tomas Fiala, the president of the European Business Association and director of Dragon Capital investment bank. He estimated that hundreds of millions of dollars were stolen by Cabinet officials and corrupt judges in 2014, as reported by the nv.ua news site.

Despite Mr. Sytnyk’s recent appointment, it will still be at least half a year before the bureau is fully functional, said Oleksandr Danyliuk, the president’s representative to the Cabinet of Ministers. The same care that was taken in selecting Mr. Sytnyk will be needed in recruiting hundreds more employees, he told the Channel 5 television news network on April 19.

“It’s good that donors are helping us in this process, and not only with money, which is not the main aid, but also expertise,” Mr. Danyliuk said. “That’s our American and European colleagues. It’s a priority for them to select personnel and conduct training for those selected. IT systems will be established, which is very important, because we have many bodies and they can’t even exchange information among each other.”