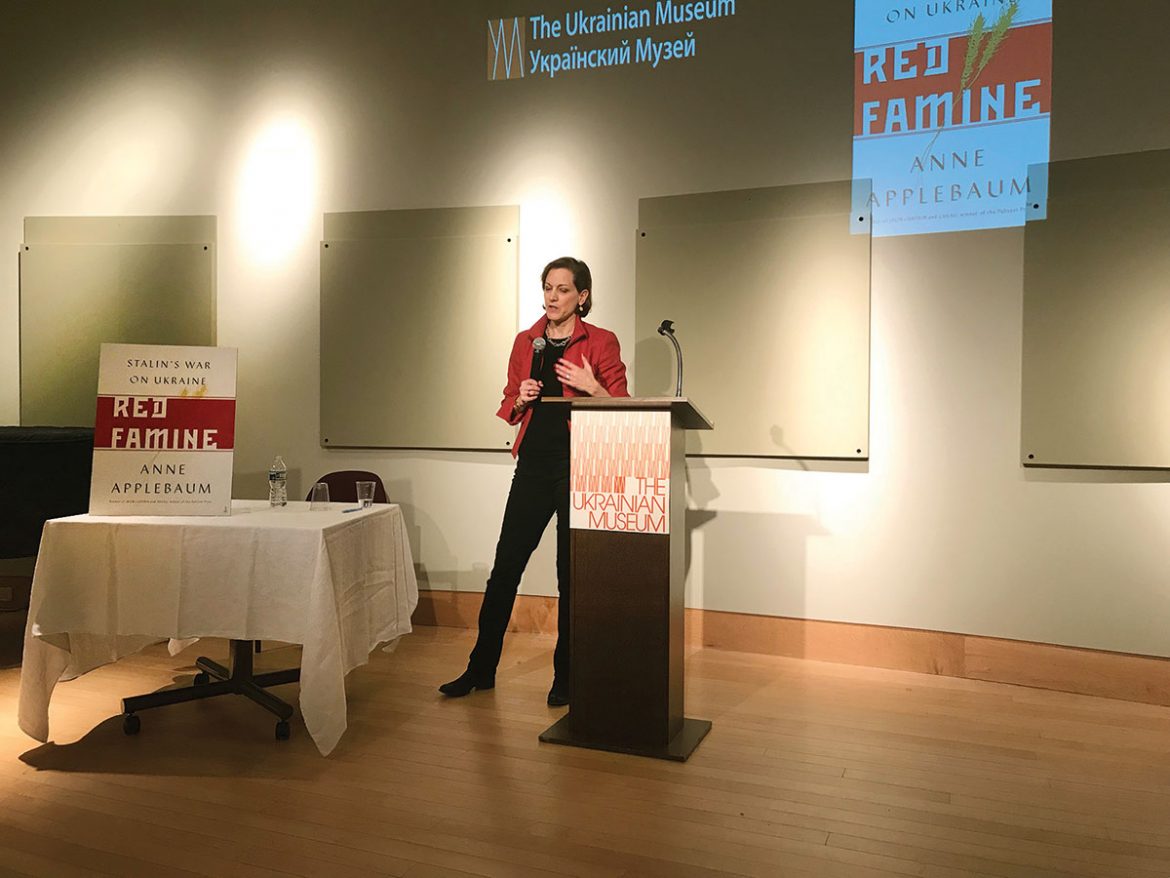 NEW YORK – Before a capacity audience, The Ukrainian Museum hosted Anne Applebaum, noted author and historian, a visiting professor at the London School of Economics and a columnist for The Washington Post, to discuss her new book “Red Famine: Stalin’s War on Ukraine.”

In her book, Ms. Applebaum argues that the Holodomor, or forced famine, was a deliberate attempt by Joseph Stalin to crush opposition within Ukraine by destroying the Ukrainian peasantry. It was, she argues, a genocide under the definition of the crime by Raphael Lemkin, the lawyer who coined the term in the 1940s.

“Red Famine” has been positively reviewed by several newspapers, including The Guardian and The New York Times. The book has gained traction within the Ukrainian American community, and the October 22 author’s presentation at The Ukrainian Museum sold out all 150 tickets.

Hanya Krill, who directs programs and marketing at the museum, provided a brief background on the author. Ms. Applebaum is a graduate of Yale University and the London School of Economics, and has extensively written on Eastern Europe. Her previous books include “Gulag: A History,” for which she won a Pulitzer Prize, and “Iron Curtain: The Crushing of Eastern Europe 1944-1956,” a recipient of the National Book Award.

“I love speaking to Ukrainian audiences,” Ms. Applebaum began. “You are the warmest, most appreciative and the most knowledgeable of the people who I talk to about this book. I am really grateful that so many of you came today.”

She then painted a picture of the events during the 1930s in the USSR. Communist Party leader Joseph Stalin had implemented a policy of collectivization that pushed many regions in Ukraine to the brink of starvation. The Communist Politburo refused to halt the export of grain and prevented Ukrainians from leaving the state.

“The result, as most of you know, was a terrible catastrophe,” exclaimed Ms. Applebaum. “As [Ukrainians] grew hungry, many people went mad. Law-abiding people began stealing… and famously there were instances of cannibalism.”

“But the Famine is only half the story. The Soviet secret police… simultaneously launched an attack on the Ukrainian intellectual, political and national elite,” she added.

“Thousands of Ukrainian churches were destroyed, along with historical buildings and monuments. Books were banned, art was confiscated, and Ukrainian dictionaries were altered. A letter was dropped from the alphabet to make it seem closer to Russian.” These policies brought about the Sovietization of Ukraine, Ms. Applebaum continued.

Despite the efforts of the Soviet Union, Ukraine overcame the Holodomor and became an independent state in 1991. But the Famine cannot be forgotten, she underscored.

“Many of contemporary Ukraine’s political problems can be traced directly back to this moment,” argued Ms. Applebaum. “The tolerance of corruption and general wariness of state institutions… date back to 1933. The Russification that followed the Famine also left its mark. Thanks to the USSR’s systematic destruction of Ukrainian culture and memory in the wake of the Famine, many Russians do not treat Ukraine today as a separate nation.”

“But history offers hope as well as tragedy,” Ms. Applebaum concluded. “In the end, the Famine failed. Ukraine was not destroyed, and the Ukrainian language did not disappear.”

Following her remarks, which elicited a standing ovation, the floor was opened for questions from the audience. The first questioner asked why the “Red Famine” author was so interested in the region, given that she has no ethnic ties to Ukraine. Ms. Applebaum stated that she took Russian language courses and extensively studied the region while at university. She had been interested in Ukraine because it was a “piece of the puzzle” of the complex history of Eastern Europe.

Another question was about whether Western leaders were aware of the Holodomor. Ms. Applebaum answered that the leaders of Britain, Italy and Poland were aware of the events but did not act. Meanwhile, the U.S. did not have a Consulate in Ukraine during the early 1930, and it is unlikely President Franklin D. Roosevelt was aware of the Famine. Prominent writers such as Walter Duranty of The New York Times also misreported developments in the Soviet Union. In fact, Duranty explicitly reported that there was no famine.

The final question was about how the Ukrainian American community could better inform the public about current events in Ukraine. Ms. Applebaum stated that hosting panels such as this event at The Ukrainian Museum engage a broader audience that is then able to inform non-Ukrainians about the history and culture of Ukraine.

The Q&A session then ended, some light refreshments were served, and the book signing began.

The attendees said they were pleased with Ms. Applebaum’s remarks.

“Anne Applebaum’s extensive research of Ukraine’s historical archives on the consequences of oppressive Soviet programs was impressive. Her ability to engage yet captivate the audience while evoking interest in the content of her book was quite remarkable,” said Dr. Borys Buniak, a representative of the Ukrainian Medical Association of North America and member of the U.S. Holodomor Committee.

“Events like these are very important to Ukrainian Americans,” added Ms. Krill. “It helps our community spread the word about Ukraine.”

After her presentation, asked by a reporter specifically about the media’s coverage of Ukraine, Ms. Applebaum commented that Ukraine was generally ignored because it did not have an independent state. Now, with the war in the Donbas and Ukraine’s aspiration of becoming a member of the European Union, the West has developed a better understanding of Ukraine.

The author’s final comments, however, offered the most important message.

“History offers hope as well as tragedy,” she reiterated. While the Holodomor was devastating for millions of Ukrainians, Stalin’s collectivization program failed. The Ukrainian language survived, and a Ukrainian nation was born after the collapse of the Soviet Union. If Ukraine overcame the Holodomor, it certainly can overcome its struggles with Russia today.

Ms. Applebaum’s North American tour was to conclude in Toronto on October 30.