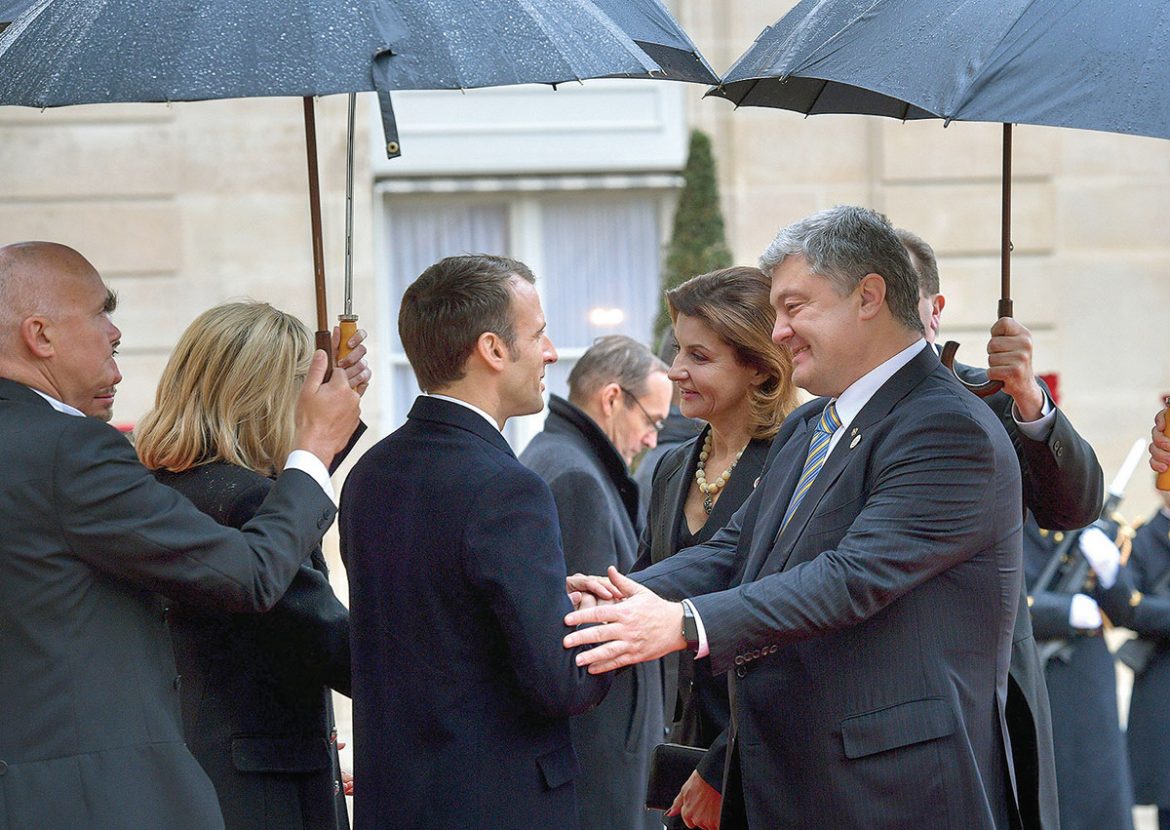 French President Emmanuel Macron greets his Ukrainian counterpart, Petro Poroshenko, in Paris on November 11 during events to commemorate the centennial of the end of World War I.

KYIV – As many of the world’s leaders met in Paris for ceremonies marking the 100th anniversary of the end of World War I on November 11, trench warfare was still ravaging Ukraine’s eastern Donbas region in a bloody conflict begun when Russia invaded the country in 2014.

That same day and 1,860 miles east of the solemn event, Russia ensured that its appointed proxies in the occupied parts of Donetsk and Luhansk oblasts remained in place through what the U.S. said were “sham” regional elections.

Brussels, Tokyo and Kyiv also condemned the charade that saw the re-installation of Kremlin henchmen to continue overseeing about 3 percent of territory that Ukraine hasn’t controlled for four years.

In a similar statement, Japan said the elections “contravene” the spirit of two ceasefire deal, referred to as the Minsk agreements, that were meant to bring peace to the region.

Instead, the ongoing war has claimed more than 10,400 lives and internally displaced 1.6 million people – the largest migration of people inside Europe since World War II.

According to the truce deal, Ukraine is supposed to carry out regional and local elections for the entire Donbas. However, Kyiv has maintained that carrying them out freely and fairly is impossible due to ongoing hostilities.

Furthermore, a mission of the Organization for Security and Cooperation in Europe hasn’t been able to fulfill its mandate of monitoring the fulfillment of the Minsk accords because of limited access and freedom of movement in the war zone.

Thus, Ukraine’s Foreign Affairs Ministry said in a November 13 statement that the Donbas elections violated Ukraine’s Constitution. It called the vote “fake” and “Illegal,” while urging the international community to recognize the outcome as “null and void.”

Kurt Volker, U.S. special representative for Ukraine negotiations, said the elections were being held “under conditions of occupation, where there is no freedom of expression, no freedom of movement, no freedom of campaigning, and generally therefore no freedom of choice for the people in electing candidates for legitimate local leadership positions.” His comments came during a conference call last week in which The Ukrainian Weekly participated.

Moscow went ahead anyway and congratulated its proxies.

Russian President Vladimir Putin’s point man on Ukraine, Vladimir Surkov, greeted the appointees: Denis Pushilin in Donetsk and Leonid Pasechnik in Luhansk. The Kremlin insisted the elections didn’t violate the ceasefire and said they represented the “will of the people.”

Ninety-three “international observers” were also brought in to provide the veneer of legitimacy, stated the Warsaw-based European Platform for Democratic Elections (EPDE).

Some of the observers were politicians and members of far-right European parties. They included Gunnar Lindemann, member of the Alternative for Germany party in the state Parliament; Jan Penris of the far-right Flemish Interest party and member of Belgium’s Parliament who also observed the 2014 sham referendum in Crimea; and Palmarino Zoccatelli of Italy’s League party, who is the vice-president of the Veneto-Russian Cultural Association.

The overwhelming majority of “ ‘international observers’ have already been involved in various pro-Kremlin efforts that include… previous participation in politically biased and/or illegitimate electoral monitoring missions in Russia… [and] justification of Russia’s actions directed at undermining Ukraine’s sovereignty, independence and territorial integrity…” stated the EPDE in a November 13 report.

Four days before the sham vote, the U.S. Treasury Department had imposed additional sanctions on Russia. “This is the first step taken in the form of sanctions that explicitly recognizes or explicitly is based on the notion that Russia actually controls the Donbas and eastern Ukraine,” Mr. Volker explained.

Specifically, three individuals and nine entities had financial sanctions imposed on them for “supporting… Russia’s attempts to integrate the Crimea region of Ukraine, through private investment and privatization projects, or those who are engaging in serious human rights abuses,” said the special envoy.

U.S. President Donald Trump didn’t visit the topic after briefly meeting with his Russian counterpart following lunch during the centennial ceremonies in Paris.

Washington, Brussels and Kyiv support the deployment of a United Nations peacekeeping mission to the Donbas war zone, but Moscow has insisted it only protect the current OSCE mission and not be given unfettered access, including to the shared Ukrainian-Russian border areas.

The likelihood of such a mission remains out of reach. Mr. Volker hasn’t met with his Russian counterpart, Mr. Surkov, since January 26 when the two spoke in Dubai. Their previous three meetings took place in 2017 and talks have stalled.

The American and Russian presidents are scheduled to hold longer talks at the Group of 20 forum of governments and central bankers in Argentina that is to take place on November 30-December 1.