MONTREAL – The award-winning feature documentary film “Recovery Room” directed by Adriana Luhova is now being screened across Canada and in the United States. The film tells the story of the impact of the current war in eastern Ukraine and the diaspora’s response on a humanitarian level. It shows the courage and sacrifice of the young Ukrainian soldiers defending their eastern territory against Russian aggression.

The documentary is under the patronage of the Ukrainian World Congress.

A highly successful Montreal screening was organized by the Ukrainian Canadian Congress (UCC), Montreal branch, at the Ukrainian Youth Center on June 15, with over 150 people in attendance, including special guests from Montreal’s ethnocultural communities

Opening remarks were given by Orest Humenny, master of ceremonies for the evening. He congratulated the film’s director and her team in bringing public awareness to the ongoing war in eastern Ukraine in a “powerful, sensitively constructed and moving documentary.”

He then introduced Ms. Luhova, who spoke about how she began photographing the humanitarian medical missions in Ukraine organized by the Canada Ukraine Foundation (CUF), and then filming the documentary in Kyiv. She related some of the difficulties in doing the project. She also shared the emotional effect on her in filming the traumatic stories of the wounded Ukrainian soldiers, and in filming the interviews with the Canadian and Ukrainian medical teams who performed reconstructive surgery on the soldiers injured by sniper fire and explosions.

An exhibit of 60 large-scale photographs taken by Ms. Luhova during the medical missions was on display.

Following the filmmaker’s remarks, Yurij Luhovy, the documentary’s co-producer and editor, talked about the almost two years it took to make the film. He mentioned how proud he was to work with his daughter and how pleased he was that she asked him to edit the film. Mr. Luhovy commented on how he was also emotionally affected by the film footage during his research for stock shots, during editing – while watching and re-watching the war footage – and by listening to the soldiers’ personal thoughts about the war and its traumatic impact on them.

When the film ended, silence filled the auditorium. The visibly moved audience then erupted into prolonged applause.

Following the ovation, the production team was invited to the front. It included the director Ms. Luhova, producers Mr. Luhovy and Zorianna Hrycenko, and film script editor Oksana Rozumna.

Eugene Czolij, president of the Ukrainian World Congress, acknowledged the dedication and commitment of the film’s production team in capturing the story of the young defenders in eastern Ukraine. He emphasized the timeliness of the documentary and encouraged others “to view and support this moving film.”

Flowers were presented and congratulations extended on behalf of the UCC Montreal to Ms. Luhova by UCC Cultural Chair Bohdanna Hawryluk.

A wine and cheese reception followed, courtesy of UNF Montreal, with viewers lingering at length, talking to the film team and entering their comments in the guest books.

“Recovery Room” was shown in Halifax at Mount St. Vincent University, on May 6, organized by the Ukrainian Canadian Association (UCA) of Halifax-Dartmouth, Nova Scotia, whose president is John Zareski; and in Sydney, Nova Scotia, on May 7, at the Holy Ghost Ukrainian Catholic Parish Hall, organized by Father Roman Dusanowskyj. The documentary’s producer and editor, Mr. Luhovy, was in attendance at both showings. 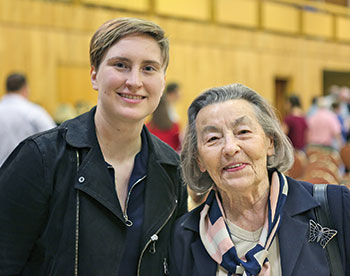 The documentary was also screened in Toronto to a standing ovation at the national conventions of the League of Ukrainian Canadians and the League of Ukrainian Women, on April 28, with the director and producers Mr. Luhovy and Ms. Hrycenko present. Attending this special screening in Toronto were delegates from across Canada, as well as members of the Canadian volunteer medical missions to Ukraine.

Screenings of the documentary are being scheduled in Oakville, Sudbury and Ottawa, Ontario; Winnipeg, Manitoba; and Buffalo, N.Y.

For further information, to help support the film or organize a screening, readers may contact mmlinc@hotmail.com, see www.recoveryroomthemovie.com or call 514-481-5871.

The trailer for the film may be viewed at  https://www.youtube.com/watch?v= 1E3DR4aULmg.