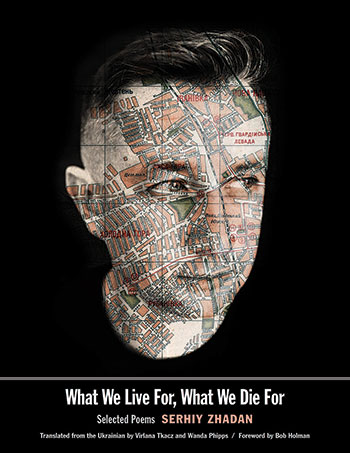 Carve this shell, tattoo artist, which hides souls and
disease – what we live for, what we die for.

Serhiy Zhadan’s book of selected poems translated by Virlana Tkacz and Wanda Phipps (Yale University Press, 2019) begins in the small worlds inhabited by individual characters and grows to encompass a greater world. It moves from the narrative to the lyrical. Themes Mr. Zhadan addresses range from war and migration to love and death. This is a collection of his best poetry curated by Ms. Tkacz. The selections from seven collections are in reverse chronological order.

The book begins with an informative foreword by poet Bob Holman, who has performed together with Mr. Zhadan. He writes that “Zhadan’s poetry comes direct from the land, from Ukraine itself.” The best poems go beyond the self, and Mr. Zhadan’s poetry does this.

The first set of poems from the collection, “Why I’m Not on Social Media,” include poems depicting idiosyncratic characters trapped by history and down on their luck. These are stories about specific people that take place during the present war in Ukraine. I remembered hearing Mr. Zhadan read at The Ukrainian Museum in New York City during his trip to the U.S. last April. He read “Rhinoceros” dynamically, performing the conversation between two people who discuss death, the story coming to life through his gestures and intonation. I found that on the page his poems are just as dynamic as they were when he performed them in person.

Yara Arts Group has performed other poems from this collection in “Hitting Bedrock” (2015.) The performance and the poems were about refugees from Donetsk. I remember having to go into a basement corridor of the theater, finding ourselves as audience members, temporary refugees. I was commanded to put my possessions into a bag that I carried throughout the show. The bright stage light focused on bags. The poem “Needle,” about taking the work of a tattoo artist to another sublime level, was part of the performance, but it is a poem from “Life of Maria” that I remember best: “Take only what is most important. Take the letters./ Take only what you can carry.”

Then, Yara repeated the poem in the performance “1917-2017: Tychyna, Zhadan and the Dogs” (2017.) The performance was about urban warfare and giving refugees a voice. It was like hearing voices from the dead. It stressed movement. Mr. Zhadan’s band, the Dogs, emphasized the movement as the audience was propelled from their seats. Like stories, they found themselves inside the poems.

The second selection included in the book, from “The Life of Maria,” goes even beyond the living characters to the dead, people trying to escape their positions on earth: “sitting in a darkness – warm and sticky like the inside of a sheep’s belly./ The dead speak from under the earth, the saints from the heavens above.”

As we go back in time, we see the history of Ukraine at the beginning of the century. The chronology helps to reveal the history. In the “Crusades of Children,” “children can see death/ in the empty-empty streets of my city,” revealing the impoverished nature of Ukraine at the time.

The selections from the other collections, “Ethiopia, “Maradona,” “UkSSR,” “History of Culture at the Turn of the Century” and “Ballads about War and Reconstruction” address subjects such as emigration and human emotion in innovative ways. An example is in the poem “Dictionaries in the Service of the Church,” in which Mr. Zhadan combines language and love: “It so happened that the woman he loved decided to/ leave his country, simply saying one day,/ you know, I have to go, we still have a couple of months.” The poem addresses language as a reason for emotional distance. Too much trust was placed on what has been said in the poem.

Ms. Tkacz’s ongoing work with Mr. Zhadan has made her familiar with his words in a way that most people wouldn’t be, as she latched on to his visions and made them her own through the performances. This personal experience, along with her precise knowledge of the Ukrainian language, and her work with Ms. Phipps create stunning translations that don’t read like translations, but read as English-language poems. This is an appropriate collection for our time, examining the ongoing war in Ukraine and migration, and their effects on human emotions.

The book ends with a tribute to the way history repeats itself. In his poem “The End of Ukrainian Syllabotonic Verse,” Mr. Zhadan writes about the Slovo building in which writers were housed in the 1930s and then arrested and executed. The Slovo building was located in Kharkiv, Mr. Zhadan’s hometown. In many ways, this collection is also a story of Kharkiv. His decision to write about the Slovo building places Mr. Zhadan in the powerful position of speaking for his people. He walks in the footsteps of writers such as Pavlo Tychyna, Mykola Khvyliovyi and Mike Johansen. When we read this book of poetry we are letting ourselves be part of history being formed.

Though this collection addresses history, some of the best poems are love poems. “…dressed in your T-shirt/ she’ll bring you water in the middle of the night,” Mr. Zhadan writes in “Alcohol” about the simple actions that mean so much more. “Sweet Peppers” is another poem about a quiet love: “the girl picks out lemons and sweet peppers/ and lets the boy hold them, then laughs and puts them back”; the images that follow in the poem are tangible: bloody strawberries and dead fish in hand. Mr. Zhadan’s poems are the perfect balance between tangible images and ideas, history and love.