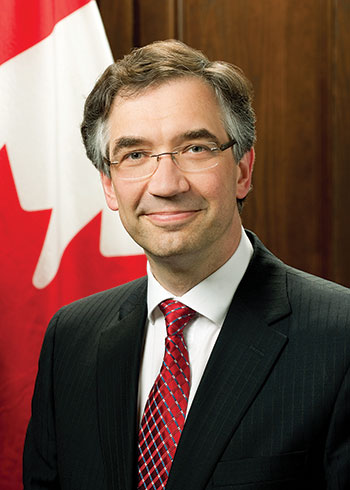 OTTAWA – On the military front, not a lot has changed since Roman Waschuk became Canada’s eighth and first fluent Ukrainian-speaking ambassador to Ukraine since the country gained its independence from the Soviet Union in 1991. When he took up his post in October 2014, Russia had already annexed Crimea, and the conflict between Russian-backed militants and Ukrainian troops had begun.

But Mr. Waschuk has noticed a difference in the mood on the ground in Ukraine, where he has spent considerable time prior to his ambassadorial appointment.

A career diplomat, the 56-year-old Toronto-born son of Ukrainian immigrants got his first taste of Ukraine when he was posted to Moscow in 1988 as the third secretary for politics at the Canadian Embassy, where he also kept an eye on Ukraine for Canada until 1991. Three years later, after spending time at the East European desk in Canada’s Foreign Ministry in Ottawa, he was dispatched to Kyiv as a counselor at the Canadian Embassy until 1998. Twenty years later, Ambassador Waschuk is on his third tour of duty in Ukraine.

“Ukraine has changed quite a bit, and more than people living there are willing to admit, I’d say,” he explained during his recent return to Canada, where he attended a biennial, four-day meeting in Ottawa of the country’s global heads of missions along with Prime Minister Justin Trudeau, Foreign Affairs Minister Chrystia Freeland and International Development Minister Marie-Claude Bibeau.

Ukraine has become a “millennial nation,” with the trappings that come with an adjective more commonly used to identify the 22- to 37-year-old crowd, according to Ambassador Waschuk. A “decline of deference” is present in Ukrainian society, along with some self-entitlement.

“Ukrainians often feel poorer than they are because their expectations now are largely driven by EU [European Union] countries where Ukrainians are measuring whether or not they are as well off as someone in Poland or Germany,” he said, noting that has led Ukrainians to find work elsewhere in Europe to earn more money than they could at home.

But the ambassador believes that some of the anxiety among Ukrainians is the result of not only their country’s economic crisis and the devaluation of the hryvnia, but also a reflection of the trauma associated with the Euro-Maidan Revolution, which preceded his arrival in Kyiv by mere months, and the continuing military conflict in the Donbas, which has claimed more than 10,000 lives.

“People don’t have a clear vision as to where they’re heading or a sense of security in terms of the future – and feel anxiety about jobs and pensions – which eats up the ability to enjoy what they have in the present,” he said.

“In certain respects, some Ukrainians are too smart for their own good,” explained Mr. Waschuk, who added that Ukraine has almost full literacy – at a rate of 99.8 percent in 2015, according to UNESCO.

(It is also worth noting that the ambassador, who was previously the senior Canadian diplomat in Serbia, is a polyglot who not only speaks Canada’s official languages of English and French fluently, but can converse in Ukrainian, Russian, Polish, German and Serbian too.)

“Some of the education and energy Ukrainians have isn’t put towards straight-ahead achievement and more into finding sneaky ways of gaming complicated systems,” he said. “Ukrainian laws are very complicated and people spend a lot of time getting around them.”

Ambassador Waschuk believes Ukraine could benefit “with an application of the KISS [Keep it simple, stupid] principle” and follow Canada’s proscriptive lawmaking.

“In Canada, if there isn’t a law against something, then you can do it,” he explained. “Whereas Ukraine, by and large, takes the opposite approach where laws have to describe what people can do. That has resulted in a much higher level of complexity of rules and people thinking of every possible permutation on how to get around them.”

Corruption also remains a major problem in Ukraine – but more so at a visceral level rather than based on reality, according to Mr. Waschuk, the second Ukrainian Canadian to serve as ambassador following his immediate predecessor, Troy Lulashnyk. (Ukrainian Canadian Nestor Gayowsky was the first senior Canadian diplomat in Ukraine, serving first as consul general in 1990 and later as chargé d’affaires in 1992.)

“The actual space for corruption in Ukraine has shrunk, with a number of government services now available online so people can serve themselves, and the state oil and gas company has been significantly cleaned up and turns a profit instead of leaving a black hole in Ukraine’s budget,” explained Ambassador Waschuk.

“But at the same time, and because of the revolution, there is an expectation that life would become better and more honest and more just quickly. So the public’s perception of corruption is that it has gone up,” he observed.

He said that recent Ukrainian polls have shown that, while people feel that corruption has increased in their country over the past five years, their personal experiences involving corruption have decreased over the same period.

There are also expectations on him, from both Ukraine and Canada.

“Ukrainians, because they regard Canada very highly and because we’ve taken a strong stance in support of Ukraine, expect to see and hear from us on a range of issues,” Ambassador Waschuk said. “Canadians, in turn, know that we’re spending taxpayers’ money and political attention on Ukraine, and want to see if there are results from what we’ve been doing.”

Operation UNIFIER, the Canadian Armed Forces mission through which more than 7,680 soldiers have received training from their Canadian counterparts as of June 1, is the highest-profile Canadian initiative in Ukraine and one that the ambassador regularly relies on to “show Ukrainians what we’re doing and reflect that back to Canadians.”

The military mission, which began in 2015, is scheduled to conclude next March.

However, Canada’s opposition Conservatives said if they lead the federal government, they would provide Ukraine with lethal weapons originally allocated to Kurdish peshmerga fighters against the Islamic State in northern Iraq, and claimed, in a May 28 news release, that nearly $7.7 million (U.S.) in arms “have been sitting in warehouses in Canada and Jordan.”

Last December, Canada added Ukraine to the Automatic Firearms Country Control List, which will enable Canadian companies and individuals to apply for a permit to export certain prohibited firearms, weapons and devices to Ukraine.

When asked whether any arms are headed to Ukraine, Ambassador Waschuk said that “there are ongoing discussions about using these new opportunities” between the Canadian private sector in the military-industrial space and the Ukrainian government.

His visit to Canada preceded the summit of Group of Seven (G-7) leaders in Quebec at which Russian aggression against Ukraine was discussed.

Minister Freeland, who like Ambassador Waschuk is of Ukrainian descent and is effectively his boss, has been one of the most vociferous critics of Russia and strongest supporters of Ukraine within the G-7. That, in turn, has helped embolden Mr. Waschuk in positioning Canada as a close ally of Ukraine while navigating the niceties of diplomacy with Russia, at least in terms of collaborating on Arctic-related issues.

But in the words of Ottawa’s man in Kyiv, Canada is a “straight-talker” and so is the ambassador, who must balance between carefully choosing words and delivering a clear message.

“Ukraine is threatened by a big, authoritarian neighbor, and so in certain respects, it’s a kind of a canary in the coalmine for what is a broader issue,” said Mr. Waschuk. “Is this an era of the strongman, which Putin prefers, or an era of people power, of which the Maidan was a big example?”

When asked to choose, the ambassador believes we are in a “temporary strongman blip,” giving Russian President Vladimir Putin the edge.

“The question for those looking at broad-based liberal democracy is how countries can be effective and organize friends and allies in that kind of world,” said Mr. Waschuk, who believes a commitment to a rules-based international order will help achieve that.

“This is not the time for retrenchment,” Mr. Trudeau said at the awards dinner. “It is a time for the Atlantic democracies to renew our commitment to universal standards of rights and liberty, enforced through a multilateral rules-based order that has promoted peace and stability and stood the test of time.”

Ambassador Waschuk can push that agenda in friendly territory where Ukrainians rank Canada, along with Poland and Lithuania, as their country’s best allies in public-opinion polls.

It also certainly helps to have a Ukrainian government eager to work with its Canadian counterpart, which is the case with President Petro Poroshenko’s administration and not so much with that of his predecessor, Viktor Yanukovych, who was ousted from office in 2014 during the Ukrainian Revolution of Dignity.

The pro-Russian and anti-European Union Yanukovych administration halted the progress Ukraine had made toward transforming its military structures to achieve compatibility with NATO standards, and dismantled or ignored Canadian programs designed to assist Ukraine’s military and public service, said Ambassador Waschuk.

“Having been in Ukraine in the mid-1990s, and now 20 years later, I can say that, while those projects may not have always delivered the exact effects we expected, the people they produced and the changes in mentality of those people mean that they have been active in either related or un-related areas in Ukraine,” he said.

For instance, the Canada-Ukraine Parliamentary Program, which was created by the Ukrainian diaspora in Canada in 1991, has spawned high-profile success at the upper echelon of Ukraine’s government. Volodymr Omelyan and Andriy Pyvovarsky, Ukraine’s current and former infrastructure ministers, are former interns of the program.

“That didn’t happen overnight. But over the course of 20 years, these people have moved into significant positions in Ukrainian life – and that means that they then starting looking for Canadian examples of how to change things in their areas of specialization,” the ambassador explained.

He said that another example was a $4 million (U.S.) project, funded by the Canadian government and run by the Canadian Bureau for International Education from 2008 to 2012 to help Ukraine reform its civil-service human resources management system. Oleksandr Sayenko, a key participant in that program, is now the minister of the Cabinet of Ministers, who heads Ukraine’s public service.

But midway through that civil-service reform program, Mr. Yanukovych was elected president, “and had no interest in actually implementing it,” explained Ambassador Waschuk.

“So, did that program fail? In the short term, it didn’t do so well – but the people that it trained are the ones leading public-service reform in Ukraine in 2018. You talk to them and you’re basically talking to people who literally speak in the same terms about competency-based management as someone from the Public Service Commission in Ottawa,” he said.

“They are also eager to have Canada send experts who can advise them on how to streamline decision-making and make sure it’s evidence-based, instead of just deals made by parliamentarians that turn into laws that nobody knows how to implement,” Mr. Waschuk said.

The ambassador is also eager to share one other initiative – a project called EDGE (Expert Deployment for Governance and Economic Growth), which is administered by Agriteam Canada Consulting Ltd. and funded by Global Affairs Canada to advance “citizen-centered democracy” and promote sustainable economic growth in Ukraine.

“If a Ukrainian ministry needs a reform conducted, the project will hire a group of bright, young Ukrainians – largely trained in the West – and bring in Canadian experts for short periods of time to provide guidance,” Mr. Waschuk explained. “It combines Canadian experience with Ukrainian youth, energy and smarts, and we’ve been seeing very good results in areas like justice, and trade and economic promotion.”

“It is under-the-hood stuff you don’t always see, but it is one of the many areas where Canada is making a difference,” Ambassador Waschuk underscored.