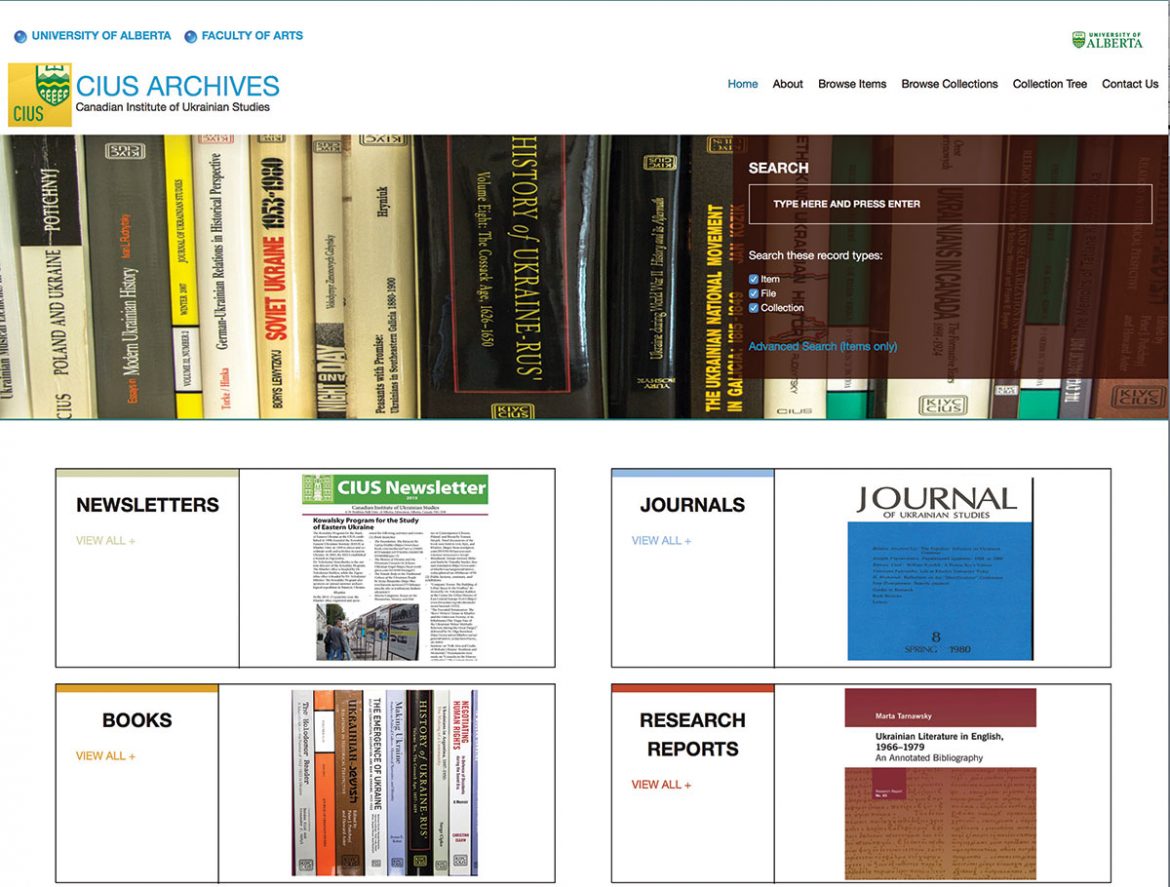 A screenshot of the CIUS Digital Archive Project website.

EDMONTON, Alberta – Developed in close cooperation with the University of Alberta Libraries and the Arts Resource Center, the Digital Archive Project of the Canadian Institute of Ukrainian Studies (CIUS) aims to digitize, systematize and describe the core publications of the institute that have been produced over the last 40 years – essentially, since its founding in 1976.

All of the digitized materials are part of the open access University of Alberta Library collections and are freely available online. The CIUS Digital Archive Project website has a search system, which operates on basic criteria such as type of document, year of publication, author, subject, scholarly discipline and chronological coverage.

As of December 2016, the CIUS Digital Archive Project website contains the following materials:

• All of the back issues of the Journal of Ukrainian Studies. Since its founding, CIUS has published an academic journal containing articles and reviews in the humanities and social sciences on topics in the scholarly field of Ukrainian studies;

• All of the back issues of the CIUS Newsletter, which has been chronicling and summarizing CIUS activities and achievements since its founding in 1976;

• The four issues of Visnyk, a Ukrainian-language newsletter published in the early 1990s for the readership of CIUS donors; and

In the near future, the CIUS Digital Archive Project collection will be expanded to include the majority of video materials at CIUS, containing historical material on CIUS and video recordings of CIUS events, such as lectures and conferences/symposia. Plans are also being made to digitize collections of important historical documents that have never been previously available in digital format, including British Foreign Office documents relating to Ukraine from the years 1917-1948.

The academic supervisor of the CIUS Digital Archival Project is Bohdan Klid. The managing director of the project is Oleksandr Pankieiev. The archival assistant is Viktoria Yakovleva.

The website of the CIUS Digital Archive Project is http://cius-archives.ca/. CIUS encourages readers to visit this new site, make use of the materials, and send their feedback.