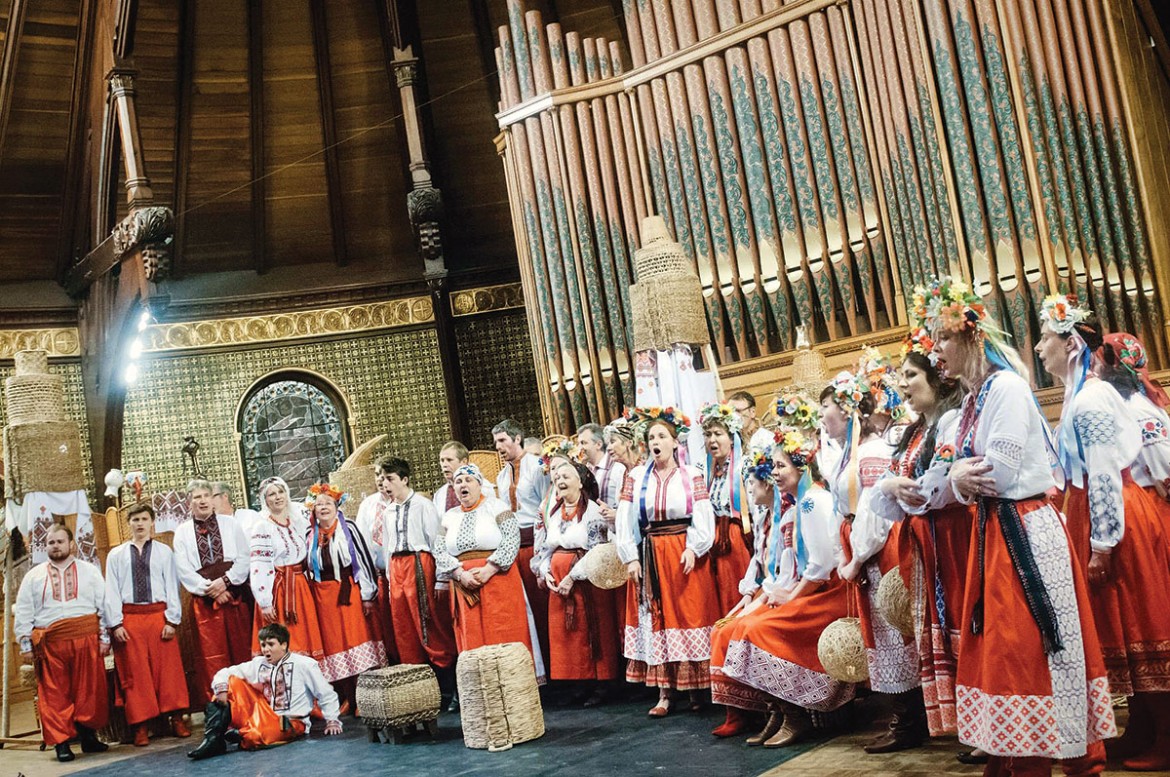 NEWTON, Mass. – The Commonwealth Lyric Theater (CLT) under the direction of artistic director Alexander Prokhorov has developed a reputation in the Boston area for its bold and ambitious revivals of relatively unknown operas such as Sergei Rachmaninoff’s “Aleko” and Nikolai Rimsky-Korsakov’s “Mozart and Salieri.” This year, Mr. Prokhorov and the CLT recruited internationally renowned soloists from Ukraine, Germany, Russia and Turkey, and joined forces with Ukrainian choirs and dance ensembles to present New England’s first professional production of Semen Hulak-Artemovsky’s masterpiece “Zaporozhets za Dunayem” (Kozak beyond the Danube).

The first two performances (May 14 and 15) were held in the imposing First Baptist Church of Newton, built in 1798. These were followed with a performance at the Mandell Jewish Community Center in Hartford on May 17, and a finale at the State University of New York (SUNY) Albany Theater for the Performing Arts on May 22. 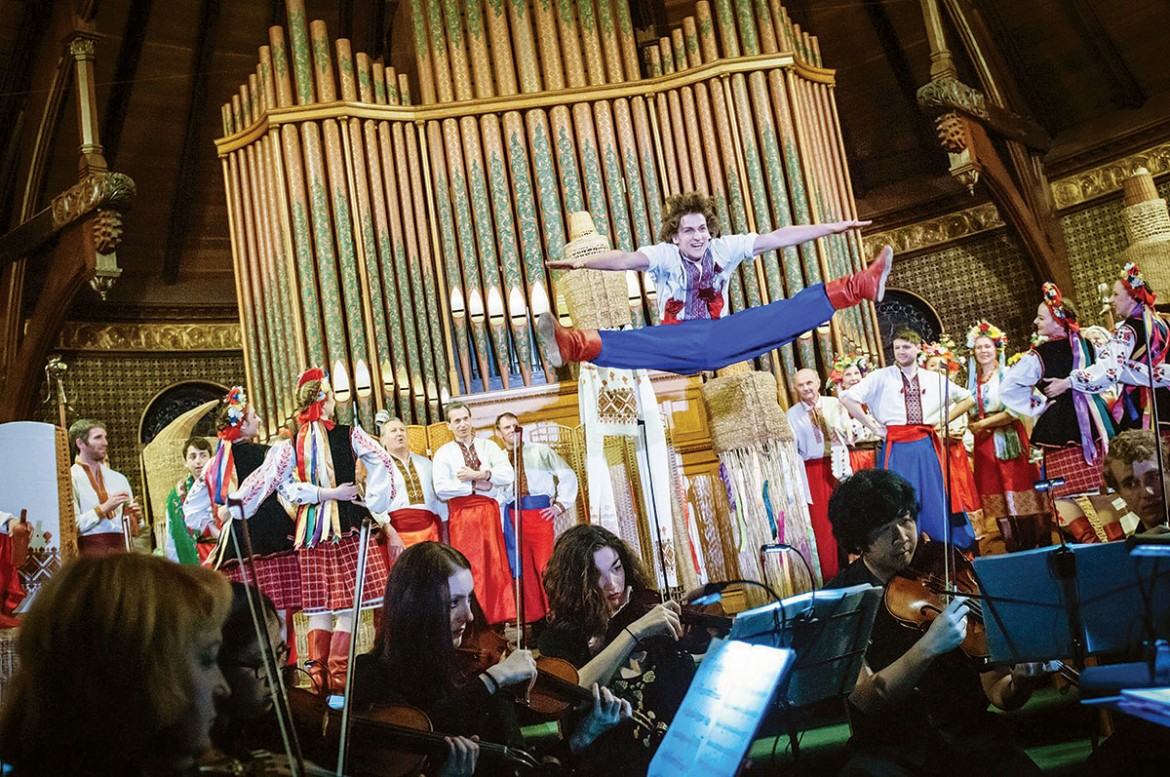 Michael Szafran leaps into action during the Boston performance of “Zaporozhets za Dunayem” as members of the Syzokryli Dance Ensemble and combined choruses look on.

On May 15, Boston Globe music critic Jeremy Eichler warmly praised the opening night performance: “The well-attended community event was full of color and charm. ‘Zaporozhets’ abounds in earthy, tuneful music. The dancing and singing (both solo and choral) was vivid, skillfully executed, and full of ardor.”

Mr. Eichler commented on the poignant political context for the theater’s decision to present the work while war continues to rage in eastern Ukraine: “Members of the Commonwealth Lyric Theater made a touchingly earnest gesture, simply mounting the work this year with a cast that included both Ukrainian and Russian singers.”

Prior to each performance, Kyiv-born soprano Olha Lisovskaya, who sang the role of Oksana and who encouraged CLT to take on this project, told the audience that this was an opera she dreamed of presenting in the United States. “This performance is dedicated to peace,” she said.

Alexander Kuzma, music director of Yevshan remarked, “Some of the text for this opera is not easy to master, even for native Ukrainian speakers.” He noted the harrowing scene when the villagers rush onto the stage in a state of great agitation as they wait to hear the fate of the imprisoned lovers Andriy and Oksana. 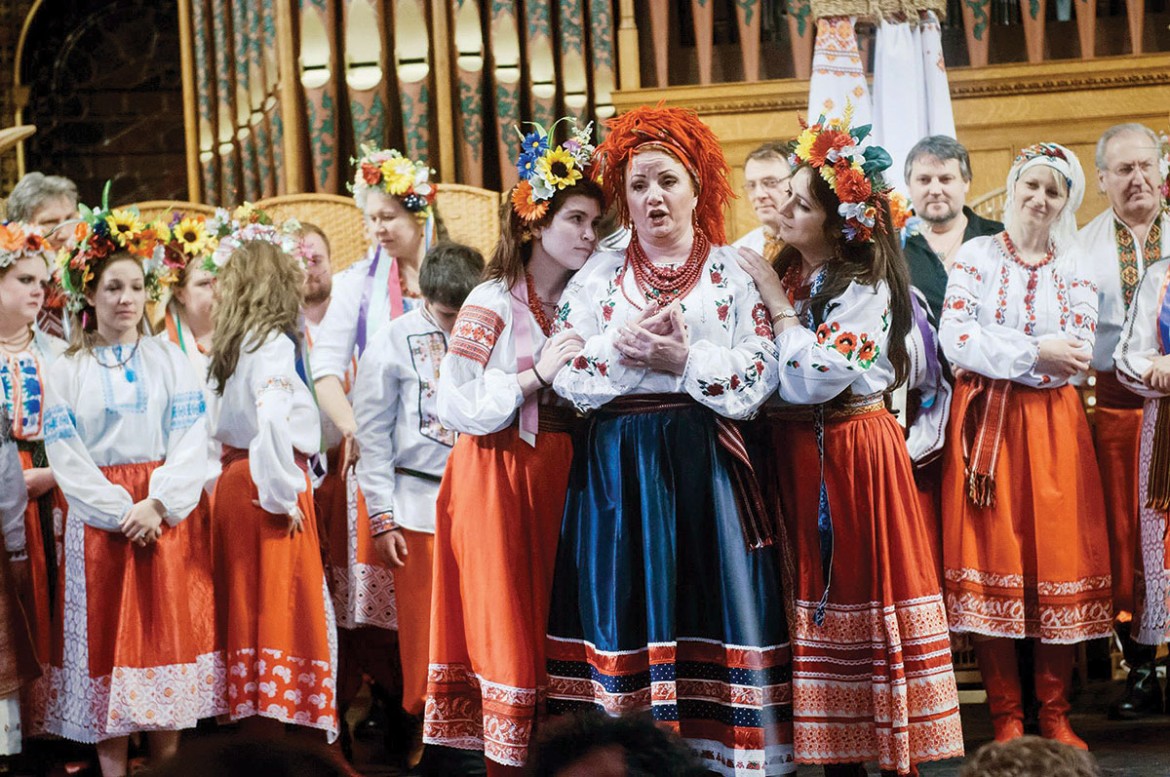 Galina Ivannikova as “Odarka” is consoled by Jean Furman (left) and Olha Lisovskaya (right) as “Oksana” during the May 14 presentation of “Zaporozhets za Dunayem” in Newton, Mass.

Mr. Kuzma explained: “Those lines have to be delivered very quickly and crisply, in a tragic-comic style reminiscent of Rossini or Gilbert and Sullivan. We were really impressed with the way our new friends from CLT pronounced those lines with impeccable Ukrainian articulation.”

Mr. Prokhorov, born and raised in St. Petersburg, Russia, went to great lengths to ensure that the large Russian émigré contingent in the CLT chorus would be sensitive to the correct Ukrainian pronunciation, and he was able to coach his singers with the help of native speakers like Ihor Kowal, the choir director at Boston’s Christ the King Ukrainian Catholic Church.

The end result was rewarding. Said Mr. Eichler: “The choral sound was full and rich and the orchestra crisply directed by Lidiya Yankovskaya.”

Mr. Eichler ended his review by reflecting on the opera’s impact: “Ultimately the night felt like less of a political statement on the current conflict, and more like a communal bridge backward – in a way that only music can do – to an earlier time and place.”

Mr. Eichler’s positive impression of the opera was echoed in a review penned by Lee Eiseman that appeared in the May 15 edition of the Boston Musical Intelligencer. “Though [Zaporozhets] comprises some fine arias, duets, choruses and ensembles, long swaths are entirely spoken. Conventional comic dialogue in Ukrainian of henpecked husbands and sultans in disguise sometimes went on too long for non-native speakers un-steeped in the tradition. Yet the ending, with a call and answer chorus of Ukrainian aspiration for homeland reached even this skeptic of nationalism.”

Mr. Eiseman recalled several other high points: “Oksana’s ‘Angel of the Night’ (Anhel Nochi) took poignant wing over some of the most developed orchestration of the evening… Her duet with Andriy, ‘A Black Cloud from the Woods’ rose to verismo passion.”

Adding to the star power of the production was Adam Klein, an accomplished tenor who has sung Don Jose in “Carmen” with 14 different opera companies, and has performed as a soloist at the Metropolitan Opera and with the New York Choral Society. Mr. Eiseman lamented the fact that in the role of Andriy, Klein had little to do until the last act, “but what he did was extraordinary. With clarion tenor and absolute engagement he stopped the show with an ardent ‘Lord of Heaven and Earth’ (Vladyko Neba i Zemli), which the chorus answered with a fine wall of sound in their aspiration for the day of return to the Ukrainian homeland.”

Mr. Eiseman took issue with some of the staging and decorations, but was impressed with Anastasia Grigorieva’s “intensely colored and layered costumes” that he said were “exuberant in the extreme.” Ms. Lisovskaya explained that the costumes were based on detailed historic research of the period when the tsarist government exiled the Zaporozhtsi to Romania. The classic Poltava regional style that Ukrainian audiences are familiar with emerged in the 1800s, but during the 1700s, the Zaporozhian exiles wore costumes that resembled the modern Lemko style from the Carpathian region.

There were several other unusual features incorporated into the CLT production of “Zaporozhets”: For example, to add a flare of authenticity, the aria of the Sultan sung by bass-baritone Bulent Guneralp was sung in Turkish, not Ukrainian. In the Hartford/Albany performances, this aria was again sung in Turkish by bass Sean Currlin. However, the Sultan’s edict was sung in Ukrainian by Polish-German bass Pawel Izdebski. Dressed in full Turkish regalia with a huge turban, Mr. Izdebski sang with tender authority. His stage presence and 6-foot-8 frame left an indelible impression.

As part of its core mission, the Commonwealth Lyric Theater seeks to nurture and promote young talent. So for the May 15 performance, the part of Oksana was sung by 17-year-old sensation Jean Furman. Ms. Furman exhibited mature artistry, along with a youthful, coquettish style, and she more than held her own in the duet with accomplished Russian tenor Mikhail Urusov.

Though he had a much smaller role, boy-alto Clark Rubinshtein mesmerized the audience in all four performances with his rendition of the Ukrainian folk lament “Do not Chatter, Nightingale” (Ne shchebechy, soloveiku).

Mr. Prokhorov added several other captivating features to each of the four performances. In Newton, he recruited six dancers from the renowned Syzokryli Dance Ensemble under the direction of Orlando Pagan to perform a suite of dances accompanied by Ms. Yankovskaya’s orchestra. The Boston Musical Intelligencer carried a riveting photo of Michael Szafran in full airborne leap with arms and legs fully extended in a horizontal Hopak-style split towering over the heads of the chorus. In Hartford, Stephan Zaets and Alina Kuzma performed a humorous folk song on the bandura, followed by a dance duet performed by high school senior Terenia Kuzma and Yevshan chorister Katja Kolcio, professor of dance at Wesleyan University. In the Albany show, the audience was delighted with the performance of a large contingent of children and teenagers from the Zorepad Dance Ensemble under the direction of Peter and Adrienne Fil.

According to Mr. Eiseman, “the most commanding figure on stage was the bass Dmytro Pavlyuk. His star turn as Karas was complete. In powerful tones that could fill any opera house, he invoked both the heroic and the comic qualities of his role. Galina Ivannikova interpreted his stage wife Odarka in a plummy mezzo with soaring tones that carried beautifully.”

In Albany, the lead roles were performed by impressive local baritone Kevin Kees, a veteran of the Chicago Lyric Opera, and Irina Petrik, a graduate of the Gliere Music College in Ukraine and San Francisco Conservatory of Music who delivered a strong and endearing portrayal of Odarka.

Mr. Eiseman raved: “What was great about the show was the talent onstage: the combined Yevshan Ukrainian Vocal Ensemble, under Alexander Kuzma, and Commonwealth Lyric Theater Ensemble, Olga France – chorusmaster, made a huge visual and sonic impact.”

Ms. Lisovskaya expressed the hope that with this successful U.S. revival, more opera companies in North America and Europe will be persuaded to include “Zaporozhets” in their repertoire.