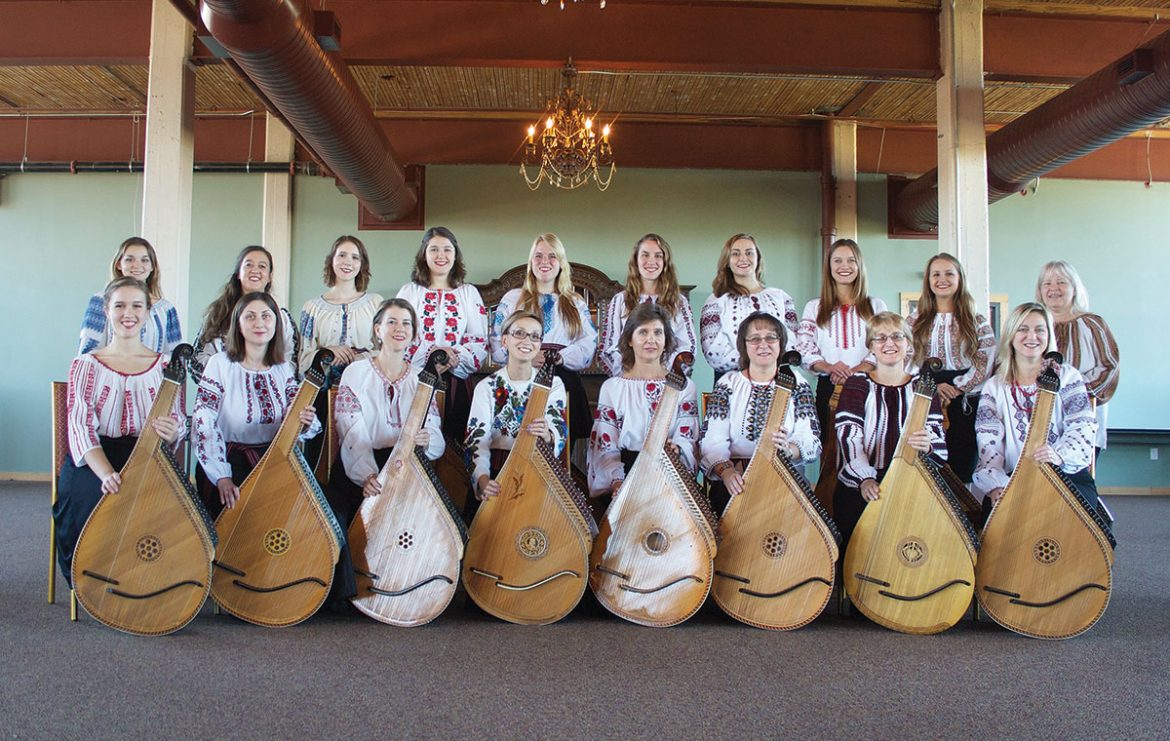 STORRS, Conn. – On Sunday, April 7, the Women’s Bandura Ensemble of North America (WBENA) performed in von der Mehden Recital Hall at the University of Connecticut’s School of Fine Arts. Solomiya Ivakhiv, the renowned concert violinist and assistant professor of violin and viola, and head of the Strings Department at University of Connecticut, introduced the group. The 18 singers and bandura players presented a well-thought out program titled “Cycles of Song,” a Vivaldi-esque celebration of the changing seasons through a nightingale’s song filled with melancholy, joy, love and loss.

A haunting, elegiac composition, “Echo of the Steppes” by Hryhory Kytasty, introduced the autumn segment. The next two selections, “The Girls Are Plowing,” arranged by Oksana Herasymenko, and “Son, the Ducks are in Flight” by Oleksandr Bilash, rendered a magnetic connection between earth and nature. The beauty of the young faces, the delicate three-part harmonies of voices and bandura playing evoked a melancholic, heart-gripping atmosphere. The following instrumental piece, “The Dueling Banduras,” a dance artfully arranged by Mykola Deychakiwsky, was played precisely and with panache.

The winter section featured “What Miracle is this?” by Vasyl Barvinsky, featuring Oksana Zelinska as soloist. The piece showcased interchanging melodic lines together with an elegant soprano solo. A wonderful surprise was a 15th century hymn sung in Latin titled “Gaudete” from “Piae Cantiones” in an arrangement by Krystina Lewicky, one of the Women’s Bandura Ensemble’s own sopranos. In addition to the bandura, the piece featured a tamburello and hand-held drum, creating a rousing spirit of joy with its driving rhythm.

The song “Flax on the Hilltop” began the spring section of the program. The arrangement by Oleh Mahlay was superb, and the ensemble’s village-style singing, especially in the low altos, was particularly excellent. The piece changed keys and along with changes in tempo, added an extra dimension. Such musical adaptations contributed to the ensemble’s diverse, spectacular sound.

“Cuckoo’s Song” was the next offering, an ode to the New Year (shchedrivka) arranged by Mr. Deychakiwsky. The different melodic lines interwoven in each verse gave the song a full range of dynamics and tempo. “Across the Wide Field,” a sacred song arranged by Victor Kytasty featured Alina Kytasty Kuzma with her natural soprano and emotional subtlety. The entire soprano section with its high notes in the penultimate verses made the interpretation outstanding.

The first feature of the summer section was “Kupalo: Summer Solstice Suite,” arranged by Mr. Mahlay and consisting of a medley of folk tunes traditionally sung during the summer solstice celebration. The piece included Ms. Ivakhiv’s masterful playing, transforming the violin sound into that of a lyra (hurdy-gurdy). A tambourine and folk drum added an extra dimension, with the altos providing a folksy intonation in the lower registers.

The program’s finale was an adaptation of Leonard Cohen’s “Hallelujah” arranged by Ms. Zelinska with Ukrainian lyrics by the Ukrainian Youth Association of Great Britain. The song was a requiem dedicated to the more than 12,800 lives lost in the ongoing Donetsk war in Ukraine. The young soloist Adriana Tuz gave the piece a haunting opening, augmented by two more voices to form a trio, with the whole chorus coming in at the end of the piece. It was a sorrowful tribute and a fitting end. The ensemble made every song its own with fresh, original interpretations. For that, the WBENA received a rousing standing ovation, which was met with an encore, “To My Son” arranged by Mr. Deychakiwsky. It was a truly enjoyable, momentous concert in every respect.

The idea of forming the Women’s Bandura Ensemble of North America originated in 2014 with Irene Kytasty Kuzma, the ensemble’s current president. She and her daughter Alina Kytasty Kuzma spearheaded the project, with the mission to bring together talented female bandurists in order to showcase the instrument, maintain musical traditions, and foster new creative directions and artistry. They were joined by Oksana Rodak of Chicago and Ms. Zelinska of Toronto who became the group’s music directors.

The ensemble presents a fresh, invigorating take on the richness of Ukrainian traditional music. The singers’ voices harmonize well, their tonality is spot on, and their timbre gives their performance a lyrical, almost mesmerizing quality. It is worth noting that the diction of the ensemble is first-rate, considering the fact that the women represent different generations of immigration from Ukraine, and include some members that are currently just learning the language. This brings in a beautiful blend of music and life experiences from self-taught to conservatory-trained musicians and adds to their strength as an ensemble.

The modern bandura played by the WBENA consists of approximately 50 strings, depending on the instrument, and is plucked like a harp. In North America the bandura was promoted by Hryhory Kytasty, who conducted the all-male Ukrainian Bandurist Chorus for many years. The Kytasty family has produced a number of composers, arrangers and performers, thus advancing the ancient tradition of bandura playing. The technique of playing this unique instrument is taught at a number of summer music camps, where most of the young women of the ensemble learned to play.

The women’s ensemble breaks with the tradition of male choruses and has become a platform for developing female musicians with talent and a passion for bandura playing. More information about the Women’s Bandura Ensemble of North America can be found at www.banduristka.org.

Ihor Kowal is the long-time conductor of the Christ the King Ukrainian Catholic Church choir in Boston.