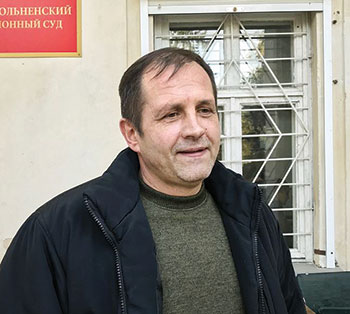 A court in Ukraine’s Russia-controlled Crimea region has sentenced pro-Kyiv activist Volodymyr Balukh to three years and seven months in a high-profile retrial on a weapons- and explosives-possession charge.

In his final statement in court on January 15, Mr. Balukh reiterated that he was innocent and that the case against him will “never make me love my so-called new motherland,” a reference to Russia.

He suggested the accusations against him were politically motivated and part of what Kyiv and rights groups say is a campaign of pressure on Crimeans who opposed Russia’s takeover of the Black Sea peninsula.

“The tears of the mothers of those who today are fighting for their right to be free will [haunt] those who are persecuting people in Crimea,” Mr. Balukh said. “But no matter what, victory will be ours. Glory to Ukraine!”

In August 2017, the same court convicted Mr. Balukh and sentenced him to three years and seven months in prison. But an appeals court canceled the ruling, sent the case for additional investigation and transferred Mr. Balukh to house arrest.

Mr. Balukh is one of dozens of Crimeans whom Russia has prosecuted in what rights groups say has been a persistent campaign to silence dissent since Moscow seized control over the Ukrainian region in March 2014.

He was arrested in December 2016, after the Russian Federal Security Service (FSB) said explosives and 90 bullets were found in the attic of his home.

The search was conducted shortly after Mr. Balukh planted a Ukrainian flag in his yard and affixed a sign to his house that read “Heavenly Hundred Street, 18.”

“Heavenly Hundred” is a term Ukrainians use for the dozens of people killed when security forces sought to disperse protesters in Kyiv whose demonstrations drove Russia-friendly President Viktor Yanukovych from power in February 2014.

After Mr. Yanukovych’s ouster, Russia seized Crimea by sending in troops and staging a referendum dismissed as illegal by Ukraine, the United States, and a total of 100 countries.

The Russian takeover badly damaged Moscow’s relations with Kyiv and the West, and resulted in the imposition of sanctions by the European Union, the United States and several other countries.

Rights groups say Crimea residents who opposed Russia’s takeover have faced discrimination and abuse at the hands of the Moscow-imposed authorities.

In March 2017, the European Parliament called on Moscow to free more than 30 Ukrainian citizens who were in prison or other conditions of restricted freedom in Russia, Crimea and parts of eastern Ukraine that are controlled by Russia-backed separatists.

Ukrainian Foreign Affairs Ministry spokeswoman Maryana Betsa condemned the court’s January 16 ruling. She told RFE/RL that the court’s decision was “illegal,” adding that “the occupational authorities use our citizens as hostages of their aggression.”

“We condemn the court’s decision and express our protest to the Russian Federation. …Actually, Balukh is sentenced for his patriotic position, for a flag on his house. There are no doubts that Russia is trying to eradicate the Ukrainian, Crimean Tatar population in Crimea,” Ms. Betsa said.