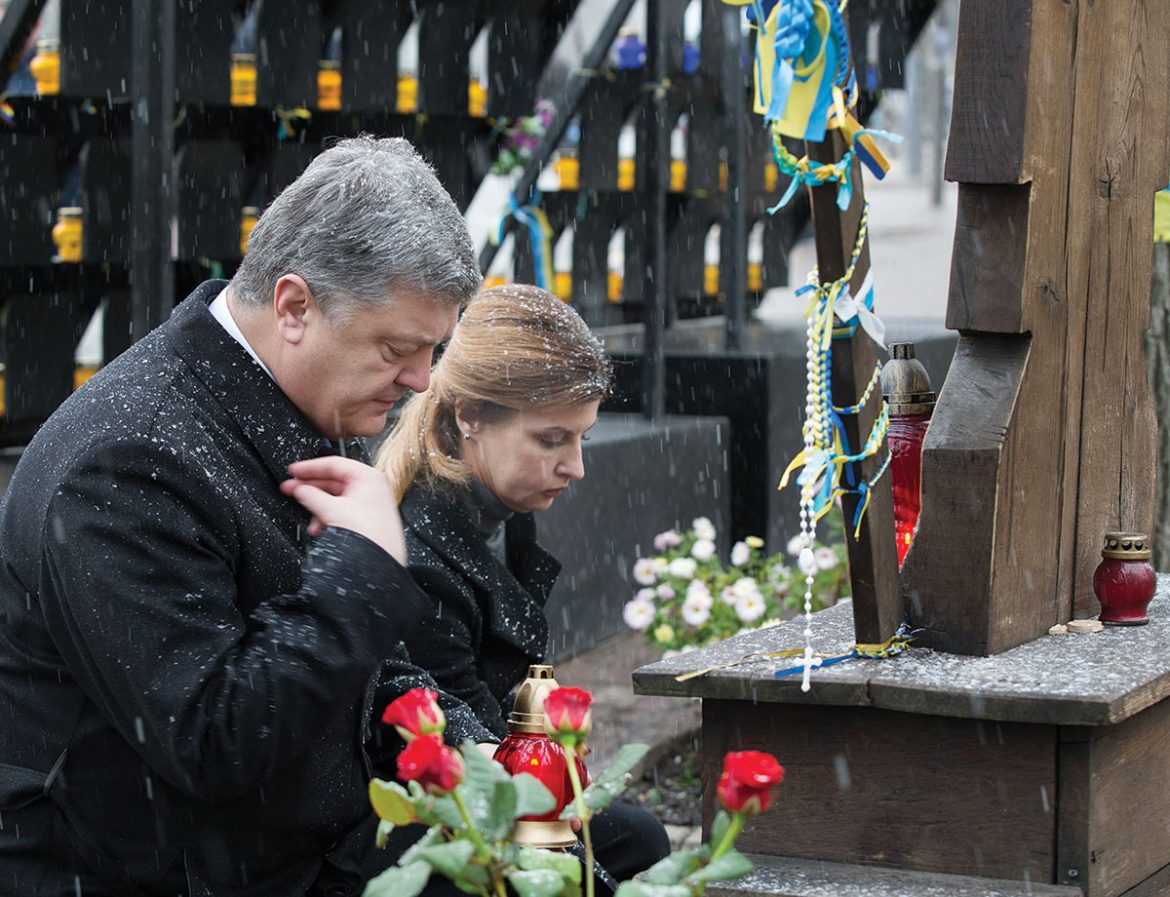 President Petro Poroshenko and First Lady Maryna Poroshenko visit a memorial to the Heavenly Hundred in downtown Kyiv on November 21 on the fourth anniversary of the Euro-Maidan Revolution.

KYIV – Four years after the Euro-Maidan Revolution erupted in November 2013, political and sociological experts still believe that the following year, 2014, was a breakthrough year for Ukraine that firmly set the country’s course of development towards democratization and embracing European values.

An “absolute majority” of 62 experts that the Kyiv-based policy center Ilko Kucheriv Democratic Initiatives polled earlier this month said the main achievement of the popular uprising is European integration and the signing of a far-ranging political and free-trade agreement with the European Union, as well as the overthrow of Kremlin-backed former President Viktor Yanukovych and his cohort.

Next on the list of achievements was the “success of post-Maidan reforms, strengthening of civil society and the start of combating top-tier corruption,” the think tank found based on a comparison of identical polls of experts conducted in November in the years 2014-2016.

“The ultimate goal of all transformations and implementation of reforms in Ukraine is full membership in the European Union,” President Petro Poroshenko said on the morning of November 21 at St. Michael’s Square to mark the designation of that date as Ukrainian Paratroopers Day to coincide with the date when the country marks the Day of Dignity and Freedom. November 21, 2013, was the date when the Euro-Maidan protests, which turned into the Revolution of Dignity, began.

The setting for the country’s fifth president’s speech was not lost on the crowd. St. Michael Cathedral legendarily rang its bells on November 30, 2013 – for the first time since the Mongols breached the city in 1240 during the times of Kyivan Rus’. Riot police forces that evening violently dispersed the remaining protesters on Independence Square who had come out nine days earlier to call on Mr. Yanukovych to reverse his decision to not sign an Association Agreement with the European Union.

Those who escaped found shelter at St. Michael’s Monastery 500 meters up the hill as Kyiv’s residents rushed to bring the beaten protesters beverages and sandwiches. Meanwhile, taxi drivers and regular vehicle drivers shuttled others to hospitals for medical treatment for free and brought reinforcements to the center to rally against police brutality.

Before heading down the hill towards Independence Square with his spouse to commemorate the 100 people who were shot dead during the Euro-Maidan Revolution, Mr. Poroshenko said that he would travel to Brussels two days later to attend the Eastern Partnership Summit – a yearly joint policy meeting between the 28-member EU and its eastern neighbors.

The president said that the “ultimate goal, with you, dear friends, is clearly known – full membership in the most prestigious alliance of the world, the final return of Ukraine to the European home. The Association Agreement with the European Union, the roadmap for reforms will bring us closer to this prospect.”

Systemic corruption and related schemes that suck taxpayers’ money still plagues the country the most, according to the Democratic Initiatives experts’ poll and Western governments.

“Also, currently what Ukraine lacks is the rule of law and the ‘reset’ of governance and its qualitative revival,” an overwhelming majority of experts stated. 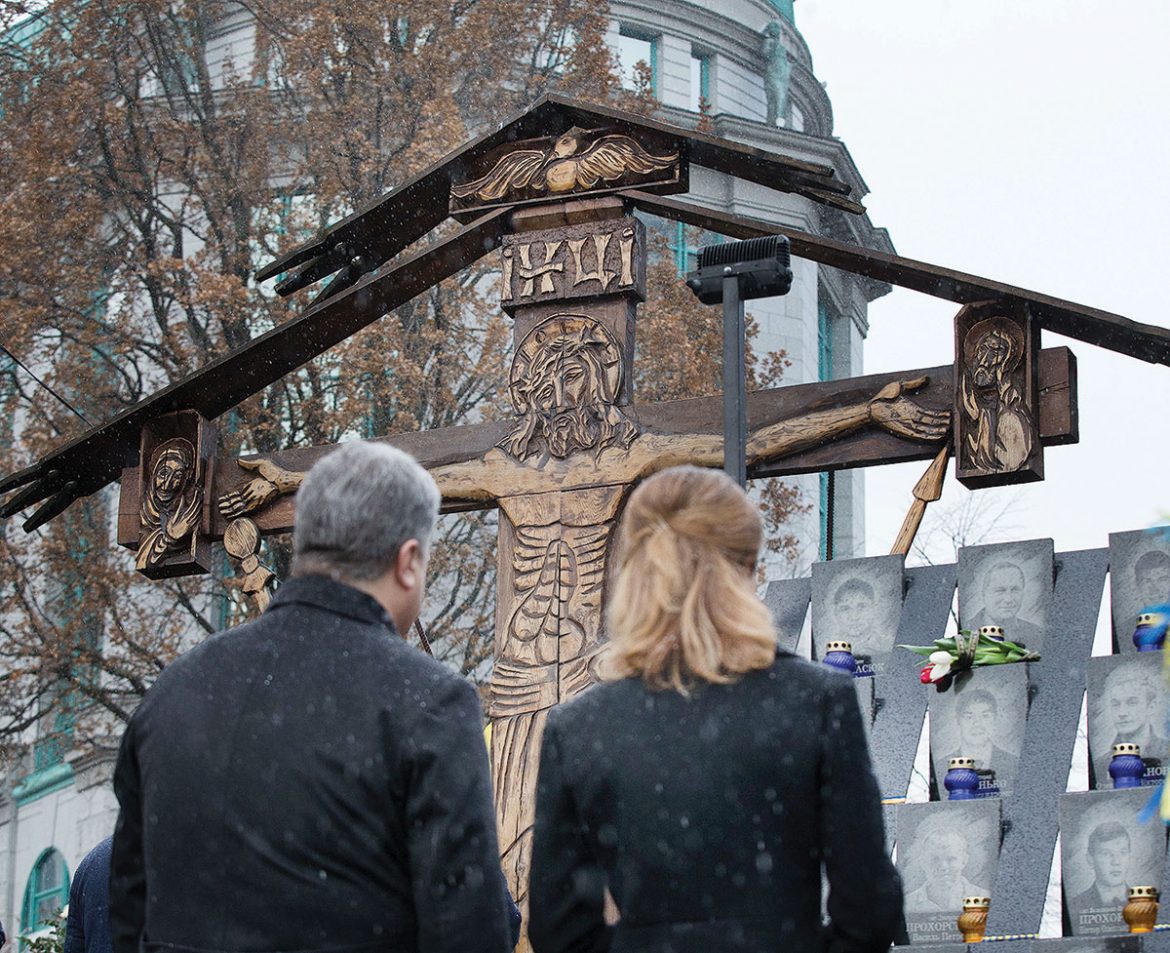 Ukraine’s president and first lady at St. Michael’s Square before a memorial to the fallen.

They also lamented the fact that no high-level prosecutions have taken place in-country or in absentia of those who gunned down the 100 people killed late in February 2014 at the apex of the Euro-Maidan protests, mostly by sniper fire, or those responsible for the large-scale theft of Ukraine’s coffers that left the treasury mostly empty when Mr. Yanukovych fled to Russia.

Unlike after the 2004 Orange Revolution that saw Viktor Yushchenko overcome Kremlin-backed Mr. Yanukovych amid rigged presidential elections and another mass protest, the nation has moved markedly forward since the Revolution of Dignity.

Dr. Kuzio, who is a non-resident fellow at the Center for Transatlantic Relations of John Hopkins University’s School of Advanced International Studies, said there are “two major differences” that make “European integration irreversible.”

One is that Russian leader Vladimir Putin “got the opposite of what he had intended” after invading the Ukrainian territory of Crimea and the two easternmost regions of Luhansk and Donetsk immediately after the revolution of 2013-2014.

He “pushed Ukraine away” and “thought that it would be a cake walk, which only showed once again that Moscow doesn’t understand Ukraine,” Dr. Kuzio said.

The author of the books “Putin’s War Against Ukraine. Revolution, Nationalism and Crime” (2017) and “Ukraine. Democratization, Corruption, and the New Russian Imperialism” (2015) added that Russia’s actions especially showed the eastern part of the country that “Ukraine and Russia are no longer ‘brothers.’ ”

Second, Dr. Kuzio said, is that, unlike after the Orange Revolution, the EU is “offering Ukraine integration… A whole support mechanism is in place for reforms… Plus a whole range of countries like Canada, the U.S., Britain and Germany are assisting.”

Two little-known aspects of change that lack acknowledgement, Dr. Kuzio noted, is that younger lawmakers who are in Parliament today come from civil society and that there are more women national deputies than before.

Parliamentarians like Svitlana Zalishchuk and Hanna Hopko, both age 35, came from civil society and were part of the opposition to the Yanukovych regime. Ms. Hopko, for example, was an anti-tobacco activist, while Ms. Zalishchuk was involved in improving the capacity for non-profit organizations to have a better impact on society.

“I’ve never seen so many young people and women in Ukraine’s Parliament,” Dr. Kuzio said. “They could go into the private sector and make more money, but they’re patriots and want to work in Parliament. Western governments expect too much too quickly.”

The political scientist also agrees with the experts’ poll findings that more could be done to crack down on corruption. Especially, on the fourth anniversary of the Euro-Maidan, he lamented that no one at the country’s helm in 2010-2014 has been tried for murder or large-scale graft.

“Sure it’s a different ball game now, but there are reservations about Poroshenko and about senior people not going to jail and that kind of anguish,” Dr. Kuzio said. “But a huge number of reforms were undertaken, and that is underestimated in the West… Yet the proof is in the pudding, and it’s about holding people accountable… Still, it’s not the mafia state like it was under Yanukovych.” He also noted that “Ukraine has a real army now for the first time since independence.”

Given that election laws will change to make voting for national deputies more representative in 2019, he is optimistic that more genuine leaders will emerge. And that means the “path to [positive] change will continue,” Dr. Kuzio stated.