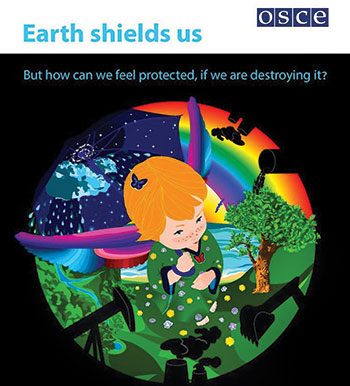 This image by Aghidel from Ukraine won third prize. Depicted is an innocent child surrounded by environmental destruction.

VIENNA – The Organization for Security and Cooperation in Europe (OSCE) on October 14 announced the winners of its visual design contest to help raise awareness about the security risks linked to climate change. Co-sponsored by eYeka, a global community of creative designers, the OSCE competition attracted 125 entries from 22 OSCE participating states and partner states.

First prize went to Alvion of Spain, whose powerful illustration titled ‘”Dangerous Deals” depicts an ominous handshake between parched land and bullets, capturing the link between climate change and conflict. He said he wanted to create an image that “stays in the memory of whoever sees it.”

Samira from Morocco won second prize for her striking visual of the planet Earth draining away through an hourglass, with communities destroyed and families displaced due to climate change. She emphasized that she wanted to “show through the symbolism of the hourglass the urgency and the time factor that we must act quickly.”

Aghidel from Ukraine, who won third prize for an image of an innocent child surrounded by environmental destruction, wanted to juxtapose the “defenselessness of a child with the ravages of the insatiable consumption of resources, air and water pollution, deforestation, and more.”

“I was impressed by the diversity and high standard of contest entries, which I believe show the commitment of people across the OSCE region and beyond to tackle climate change. My sincere thanks go to all of the contributors for their creative efforts to portray this serious threat to security confronting us today,” said OSCE Secretary General Lamberto Zannier.

eYeka’s Chief Executive, Francois Petavy, said: “We are delighted that the OSCE provided us with the opportunity to address one of the most critical challenges that humanity is facing. Organizations that co-create with people give themselves the opportunity to become more relevant, and they help create a better world by acknowledging people’s voices.”

The competition was held in the run-up to an OSCE Security Days event devoted to climate change and security, to take place on October 28 in Vienna. The event, which is open to the public, will bring together senior representatives of governments, regional and international organizations, NGOs, academia, philanthropy, business and entrepreneurs for an open, interactive discussion on the most effective approaches to counteracting the security risks of climate change.

View all Must reads/In the Press Stories →