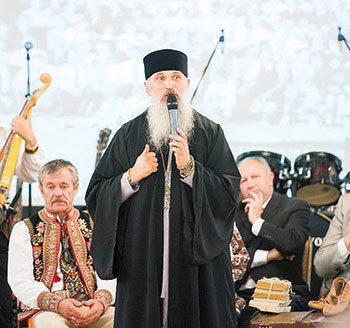 CHICAGO – When Lydia Tkaczuk, Marijka Klimchak and Orysia Kourbatov request your help, you just can’t say no. They are president, curator and administrator, respectively, at the Ukrainian National Museum in Chicago – a beaming bastion of pride for Ukrainian Americans. These tireless women nurture and perpetually enhance it as if it were their only child. So, when they told me they were planning a 65th anniversary gala showcasing Ukrainian immigration through music and asked me to MC, I just asked: “where, when and what do I wear?”

On October 5, at 6 p.m. “Ukrainian time” (about an hour later, which our cocktail-sipping guests didn’t seem to notice) Ms. Tkaczuk welcomed a full house of convivial museum patrons. She recounted how, from a few letters, books, magazines, photos and rare documents of historic value, a museum was born, thanks to the foresight and passion of Oleksa Hankewych, Orest Horodysky, Julian Kamenetsky and financier Dr. Miroslav Simenovych. That was in 1952. 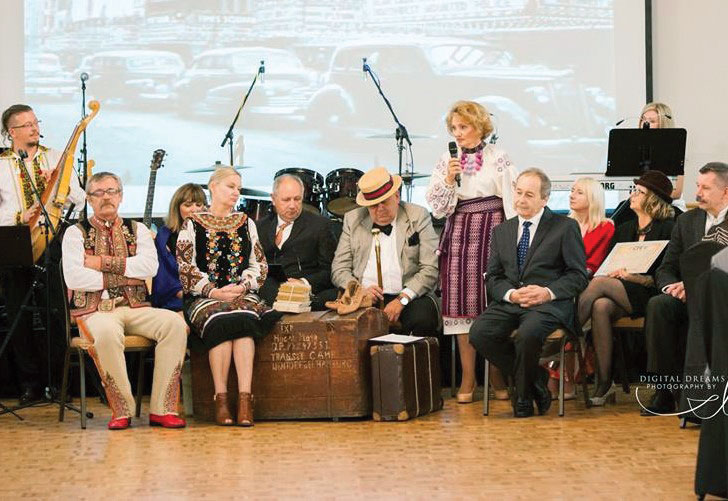 Four waves of immigrants to the United States are represented. 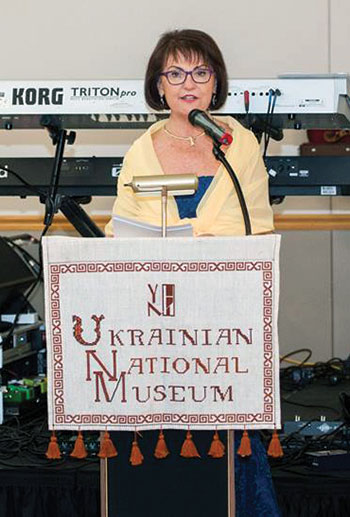 Once Ms. Tkaczuk had brought us up to speed on the museum’s history, renowned bandurist Ivan Shmilo and I executed Ms. Klimchak’s musical vision by sharing a bit of background about each immigrant wave, then introducing the performances that represented their journeys.

As we described the first wave of economic immigrations who arrived between 1870-1914, a slide show of these peasant farmers flashed on the screen. Invited into the spotlight were Josyp and Oksana Mikolyash, who recited poetry from the era, and dancers Anna Rosinska and Andriy Khomzyak, who demonstrated their intricate footwork with the ease of an authentic Hutsul couple. Mikhajlo Klimchak also read a letter from Metropolitan Sylvester Sembratovych written to immigrants who in the 1880s requested that clergy be sent to their small settlement.

To introduce the second wave of semi-skilled, literate immigrants escaping the chaos of post-World War I Ukraine and arriving between 1920-1939, Mr. Shmilo passionately strummed “Hey U Luzi Chervona Kalyna,”  march of the Sichovi Striltsi freedom fighters, which it seems every Ukrainian can hum, if not sing, with patriotic flair. The two second wave guests among us were honored with hearty applause. The top tier dance band Rendezvous played, and internationally touring Hromovytsia ensemble members, led by Roksana Dykyj Pylypczak and Danusia Wasylyshyn, danced the Charleston, evoking the joys of Jazz Age assimilation. 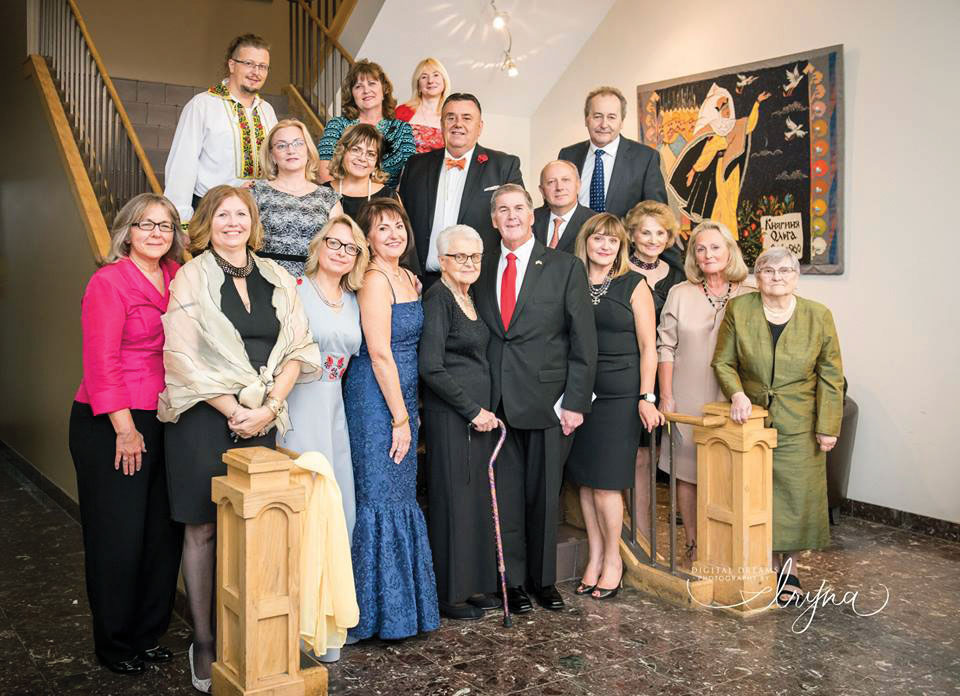 The Ukrainian National Museum committee and performers at the gala.

As the dancers left the spotlight, Mr. Shmilo’s bandura mournfully extinguished our short-lived elation, and I recited an excruciatingly painful poem paying homage to the millions of victims of Stalin’s atrocity – the Holodomor of 1932-1933. Never allowing the world to forget this genocide was one of the most heartfelt ambitions of the third wave of professionals and intellectuals who immigrated after World War II. Talented performers Maria Fedachtchin, Mr. Klimchak, Halyna Parasiuk, and Orysia and Kostia Kourbatov described and depicted the patriotic and talented activists and artists who arrived between 1948 and 1955. Among them was humorist Mykola Ponedilok, whom Josyp Mikolyash channeled with wit and zany slapstick in a hilarious skit about the author’s first day in America.

When I asked all the members of this wave to stand, more than half of the gala guests were on their feet, basking in applause – including my mother, Halyna. I was wearing the embroidered dress she performed in with a Ukrainian Women’s League trio in the early 1970s. I was especially proud to honor her entire generation for their fervid lifelong activism in the Ukrainian community, and to thank them for the robust cultural heritage they passed on to us. 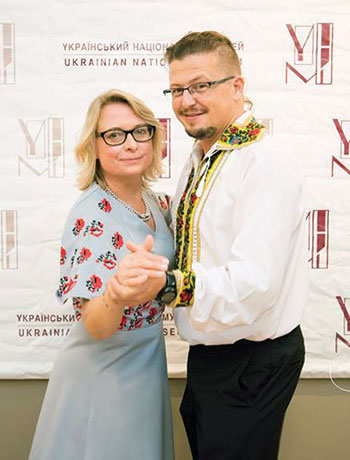 These women and men funded, patronized, volunteered at and introduced their children to the Ukrainian National Museum, as well dozens of other institutions, including the vibrant youth organizations SUM, ODUM and Plast [Ukrainian American Youth Association, Ukrainian Democratic Youth Association and Plast Ukrainian Scouting Organization] members of which took turns singing their hymns with gusto. Song spilled into the tango, elegantly executed by Valia and Mykola Sidelnyk, and once again Anna Rosinska and Andriy Khomzyak, to the vibrant, festive sounds of Rendezvous.

Finally it was time to hand over the mic to a highly revered representative of the fourth and most recent wave of immigration, which began in the 1990s with the fall of the Soviet Union and continues today. Olia Mendyuk delivered a heartfelt, nuanced speech, in both Ukrainian and English, about the roles and struggles of these new keepers of the Ukrainian community’s torch.

Having both cried and laughed throughout the emotional oscillation of the program, guests were quite prepared for the tasty wine and elegant dinner presented by the Ukrainian Cultural Center catering staff. Photographer Iryna Yatsyshyn and sound designer Sashko Khryplyvyj didn’t have much time to rest, as they continued capturing and enhancing the delectable dinner, which was followed by a diverse dance-song mix à la Rendezvous that had the dance floor spinning, twirling and hopping from corner to corner. Perpetual hostesses by nature, Ms. Tkaczuk and Ms. Klimchak took to the mic periodically to thank the gala committee members and generous sponsors. 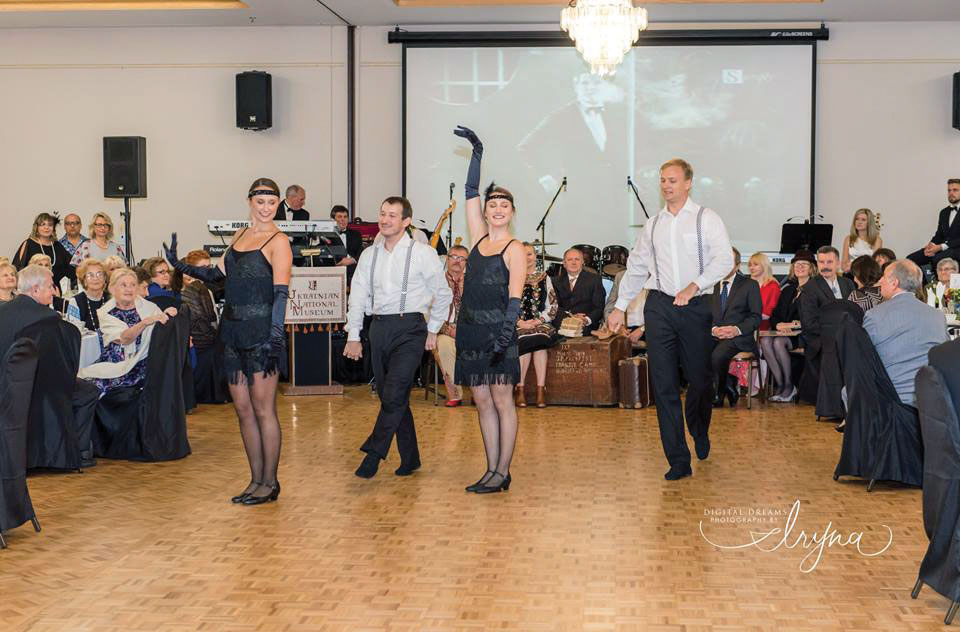 After reminiscing about the innovative past, and reveling in the well-funded future of the Ukrainian National Museum, guests were delighted that this nucleus of Ukrainian culture is in such capable and creative hands.