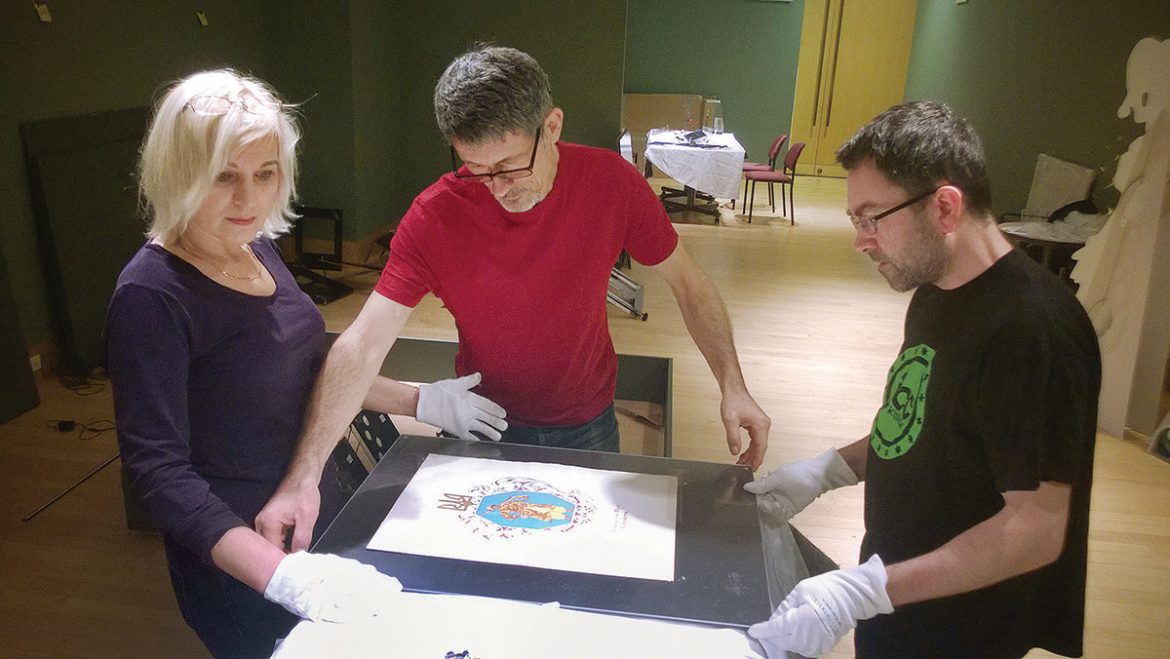 Installation of the State Emblem of Ukraine designed by Heorhiy Narbut, 1918. Collection of the National Art Museum of Ukraine. In the photo (from left) are: Liubov Androshchuk, Volodymyr Taran and Danylo Nikitin.

NEW YORK – The Ukrainian Museum has opened “Full Circle: Ukraine’s Struggle for Independence 100 Years Ago, 1917-1921,” an exhibition that commemorates the 100th anniversary of one of the most dramatic and fateful periods in Ukrainian history – the struggle for independence from 1917 to 1921 – and traces the creation of the modern state of Ukraine on ethnic Ukrainian territories.

On display are informative text and photo panels, official seals and medals, vintage flags and dozens of original documents – artifacts bearing witness to the turbulent and important period that became the underpinning for the nation’s long-awaited sovereignty, finally attained in 1991. The parallels between the struggle for independence 100 years ago and Russia’s aggression toward Ukraine today are all too vivid, engendering the exhibition’s title “Full Circle.” 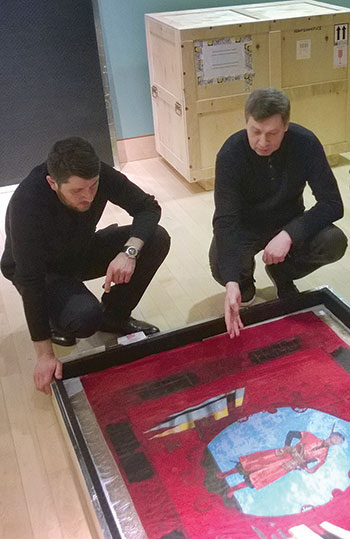 Uncrating the 1917 Ukrainian Zaporizhian Regiment flag. Collection of the National Museum of the History of Ukraine. In the photo (from left) are: Serhii Synookyi and Yurii Savchuk.

Organizers of the exhibition include The Ukrainian Museum, the Museum of Kyiv History, and the Sheremetiev Museum (Kyiv). Taking part in the exhibition are 26 museums, archives, libraries, institutions of learning, and private collectors from four countries – Ukraine, Bulgaria, Switzerland, and the United States.

Dr. Yurii Savchuk, senior researcher at the Institute of History, National Academy of Sciences of Ukraine in Kyiv, is the guest curator of the exhibition. “Full Circle” will be open to the public from April 7 through September 29.

With its underlying premise that the Ukrainian nation’s historical aspiration toward a united, sovereign, modern, democratic European state has its roots in the Ukrainian Revolution of 1917-1921, the exhibition is structured around five principal themes:

1. “Revival of the Nation” encompasses the period from March 1917 to January 1918 – a time of national awakening during which Ukrainians increasingly embraced the idea of nationhood, with universals (declarations) reflecting the gradual transition from autonomy to the proclamation of an independent Ukrainian National Republic.

3. “Struggle for Ukraine” represents the Ukrainian people’s four-year armed struggle for the right to self-determination. 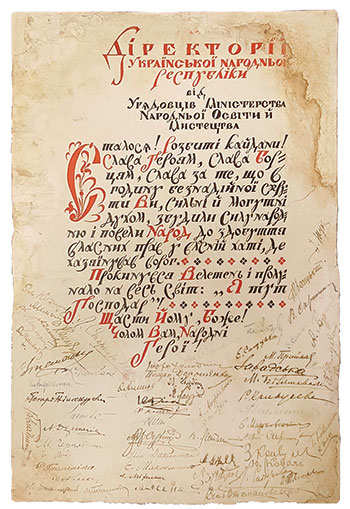 Greeting to the Directory of the Ukrainian National Republic from officials of the Ministry of Education and Art. Design by Heorhiy Narbut, 1918. Collection of the Patriarch Mstyslav Museum at the Ukrainian History and Education Center.

4. “International Recognition of Ukraine” was an important factor in claiming legitimacy for the national aspirations of Ukrainians. It was through the efforts of Ukrainian diplomacy that important progress in this area was achieved during the period 1917-1921.

5. The “Ukrainian Diaspora’s Support” and response to the events in Ukraine during its struggle for statehood and ultimately the proclamation of independence.

The majority of the items on display are being exhibited for the first time. Among other things, the exhibition showcases rare objects from key historical events such as the peace treaty signed in Brest-Litovsk on February 9, 1918, between the Ukrainian National Republic and the Central Powers (Austria-Hungary, Bulgaria, Germany and Turkey); memorabilia of historical figures such as Symon Petliura and Volodymyr Vynnychenko; a silver funeral wreath honoring the Sich Riflemen (Sichovi Striltsi) who lost their lives in the 1918 uprising against the Hetmanate; the pen used by President Woodrow Wilson to sign the Ukrainian Day Proclamation in April 1917; state papers documenting Ukraine’s bid to join the League of Nations; the state seal of the Ukrainian Central Council and the Great Seal of the Ukrainian National Republic; and printing stones for the production of 1,000-karbovanets banknotes in 1918. 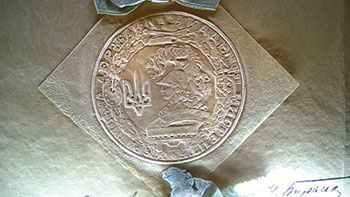 Stamp impression from a Ukrainian National Academy of the Arts diploma. Collection of the National Art Museum of Ukraine. Design by Heorhiy Narbut, 1919.

On January 22, 1919, the unification of the Ukrainian National Republic and the Western Ukrainian National Republic into one Ukrainian state was announced in Ukraine’s capital, Kyiv. “Full Circle: Ukraine’s Struggle for Independence 100 Years Ago, 1917-1921” underscores the full circle of Ukraine’s path to independence, showing that the country’s aspirations for self-determination, a free and democratic society and a sovereign nation have their roots in events that took place a century ago. Ukraine’s declaration of independence, in 1991, is seen as the final stage of that 100-year process.

The exhibition’s layout and design were conceived by Volodymyr Taran, the designer of two previous exhibitions at The Ukrainian Museum: “Ukraine-Sweden: At the Crossroads of History, XVII-XVIII Centuries” (2010) and “In Metal, On Paper: Coins, Banknotes and Postage Stamps of Independent Ukraine, 1991-2016” (2016). 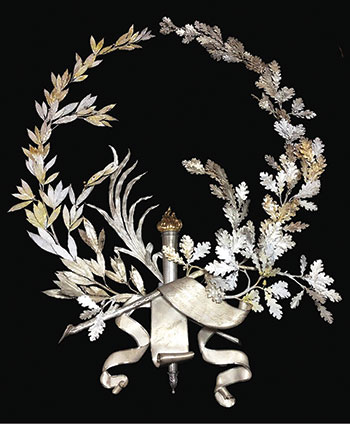 Silver funeral wreath dedicated to the “Knights of the Ukrainian National Republic,” Kyiv, 1919. Collection of the National Museum of the History of Ukraine.

The Ukrainian Museum acknowledges with gratitude the support of the Embassy of Ukraine in the United States.

“Full Circle” is made possible by Self Reliance New York Federal Credit Union, Zenia Mucha, Eugene and Daymel Shklar, Slavomyra Bilas, Lydia Hajduczok, and Prof. Jaroslaw and Alla Leshko, as well as the support of numerous sponsors, who are listed in the exhibition opening invitation, wall text, brochure and catalogue.

Guided tours of “Full Circle” may be arranged for groups of 10 or more. Tours will be of special interest to students studying the history of Ukraine and world history, in particular Ukrainian schools and Ukrainian youth groups. Individual visitors may enjoy the exhibition anytime during gallery hours, but groups must make advance reservations due to limited capacity. Contact the museum by calling 212-228-0110 or e-mailing info@ukrainianmuseum.org to make arrangements.

The Ukrainian Museum is located at 222 E. Sixth St., (between Second Avenue and The Bowery), New York, NY 10003; website, www.ukrainianmuseum.org. Hours are Wednesday through Sunday, 11:30 a.m.-5 p.m. (check the website for holiday hours). Admission: $8 for adults; $6 for seniors, and students; free for children age 12 and younger.