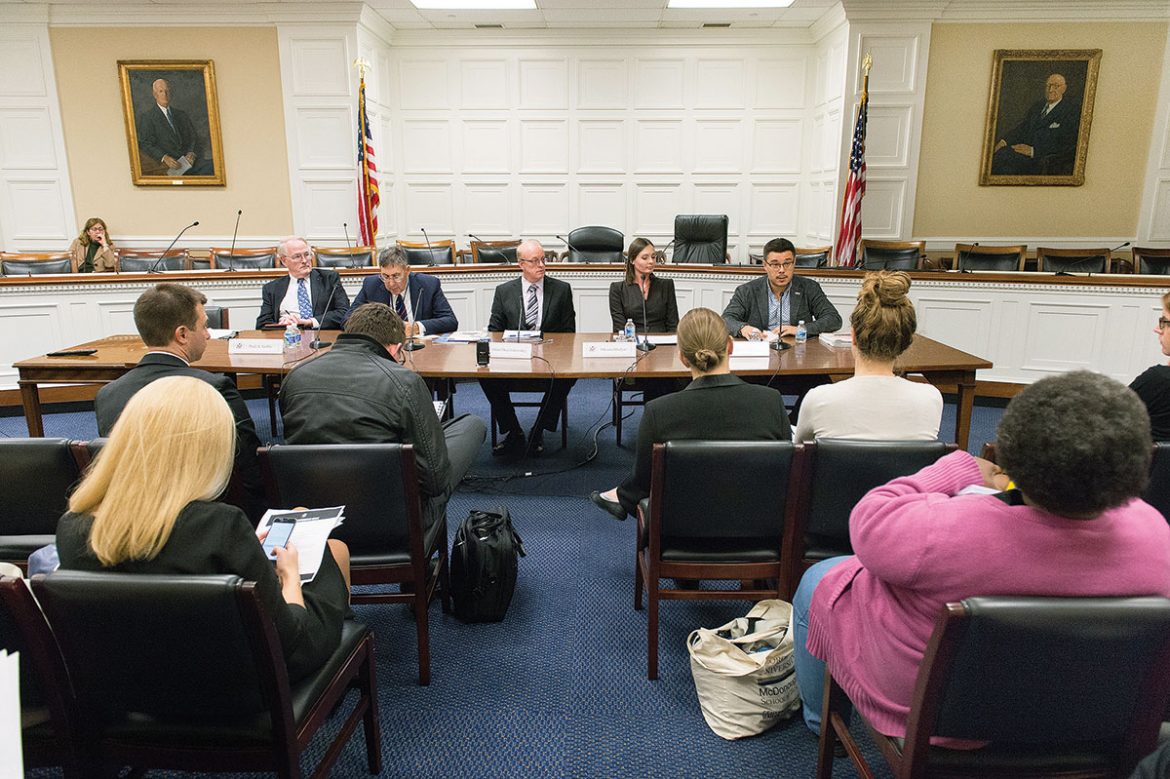 WASHINGTON – The U.S. Commission on Security and Cooperation in Europe, which is known as the Helsinki Commission, on November 10 held a briefing whose goal was to discuss how Ukrainians continue to defend Helsinki principles in the face of Moscow’s egregious and unrepentant violations, and how the international community is responding.

The Ukrainian Helsinki Group was formed 40 years ago, on November 10, 1976, to monitor compliance of the Soviet regime with the 1975 Helsinki Final Act. Orest Deychakiwsky of the Helsinki Commission noted in his opening statement that among the initiators of the group was Petro Grigorenko, a decorated World War II Soviet Army general who was also a founding member of the Moscow Helsinki Group. Because he fought for human rights and the rights of Crimean Tatars, Grigorenko was subjected to repressions and psychiatric abuse by Soviet authorities. This draws a gloomy historic parallel with the fate of a human rights activist who is currently fighting for the rights of Crimean Tatars, Ilmi Umerov, who suffered three weeks of psychiatric repression.

Violations of human rights by Russian authorities in Crimea remain persistent and egregious; its targets are Crimean Tatars and Ukrainians who oppose the illegal annexation. All speakers agreed that the actions of Russia in Ukraine present a threat to the international order and violate the basic principles of territorial integrity, inviolability of borders, sovereignty, and respect for human rights and fundamental freedoms.

Ms. Shulyar, representing the Embassy of Ukraine to the U.S., provided troubling statistics about the most recent repressions against the local citizens of Crimea. There have been 11 politically motivated assassinations, 15 activists have gone missing, and over 30 people have been imprisoned for political reasons. One hundred Ukrainian schools and many churches have closed.

The report was echoed by Mr. Berezovets, leader of the Free-Crimea movement, who discussed the November 10 arrest of three more people in Crimea. Prior to the occupation they worked at the Sevastopol-based think-tank Nomos. Following their arrest by the FSB (the Russian security service), they were severely beaten and their future remains uncertain. As in other similar arrests, these people might be put in jail on unfounded charges made-up by the FSB.

Mr. Berezovets expressed concern that Russia forces people in Crimea to take on Russian citizenship, making it more difficult for such people to protect their rights. Thus, in the case of political prisoner Oleh Sentsov, the Russian side made an argument that he could not be freed, using the example of Nadiya Savchenko, because he became a Russian citizen, just like other people in Crimea. Under current procedures, the Russian occupation regime in Crimea assigns Russian citizenship to all those who have not proactively informed the Russian authorities that they reject Russian citizenship. Mr. Berezovets noted that of the 2.5 million total population of Crimea, 4,000 people were brave enough to proactively refuse to get Russian passports, despite the current atmosphere of terror on the peninsula.

Ms. Shulyar expressed gratitude to the international community for the March 2014 resolution reaffirming the territorial integrity of Ukraine. She also called for support for the draft U.N. resolution on human rights in Crimea and Sevastopol initiated by Ukraine earlier in November. She thanked the U.S. Congress for its bipartisan support of the STAND for Ukraine Act.

In his remarks, Ambassador Herbst noted that the international response to Crimea has been good, involving sanctions and non-recognition of the illegal annexation of Crimea. However, he pointed to sloppy journalism and scholarship, which both at times assert that the Crimean population supports Russia, ignoring the fact that the Crimean referendum was manipulative and that people are not truthfully answering polling questions in Crimea due to the threat of prosecution by the Russian authorities.

Mr. Herbst pointed to the militarization of the peninsula and the Black Sea region by Russia, which is turning Crimea into an armed camp. In the spirit of the Polish saying “For your freedom and ours,” he said the international community should increase support to Ukraine monetarily in grant and loans, and with military assistance. While NATO’s Warsaw summit paid attention to the issue of Russian aggression, it mostly focused on the northeastern part of Europe. It is time to work with such countries as Georgia, Moldova and Turkey to ensure stability in the Black Sea region, he argued.

“A long-term policy to counter Putin is needed,” Paul A. Goble, editor of the Windows on Eurasia blog, commented. “Putin’s regime is not going away soon, and the aggression will not disappear soon,” he continued. The international community and the U.S. have not used all the instruments at their disposal in order to put pressure on Vladimir Putin. Some measures that could also be used include taking away visas from Russian elites and tying up the foreign holdings of Russian officials. This second strategy can be done in court by questioning the provenance of the funds used to pay for them. The international community can also reduce its diplomatic presence in Russia, and then make Russia reduce its personnel in the United States, limit visits of senior officials to Moscow, and employ other tactics.

As was underscored by Mr. Deychakiwsky at the opening of the briefing, “With its ongoing illegal occupation of Crimea and aggression in eastern Ukraine, Russia continues to flout every single principle of the Organization for Security and Cooperation in Europe (OSCE) enshrined in the Helsinki Final Act, including territorial integrity, inviolability of borders, sovereignty, and respect for human rights and fundamental freedoms.” Briefings such as this one, he said, are important “to keep shining the spotlight on violations taking place today.”

A transcript of the briefing is available on the Helsinki Commission website: https://www.csce.gov/international-impact/events/ongoing-human-rights-and-security-violations-russian-occupied-crimea.

Oksana Bedratenko is a contributing analyst for the U.S.-Ukraine Foundation.