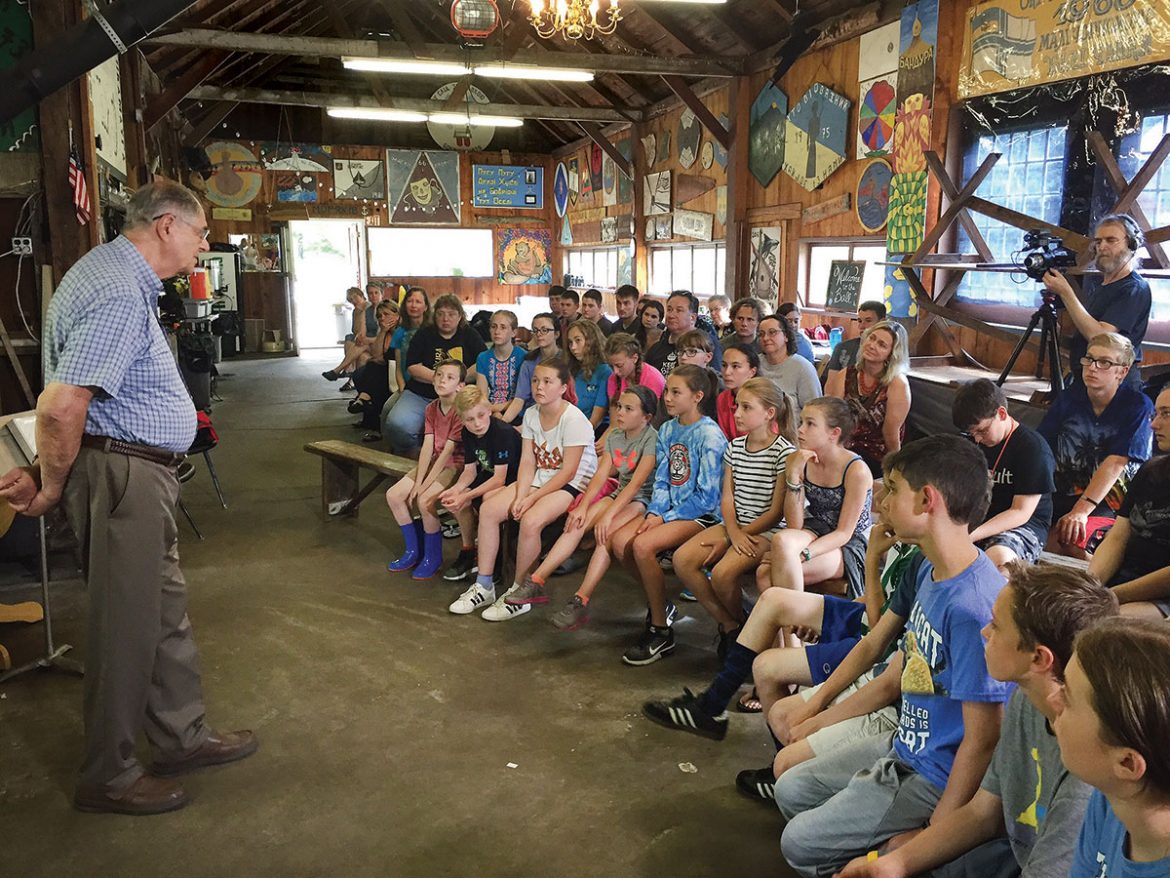 Dr. Leon Chameides, one of the children that Metropolitan Andrey Sheptytsky saved from the Holocaust by providing sanctuary at St. George Cathedral and the Univ Monastery in western Ukraine, speaks at Bobriwka.

COLEBROOK, Conn. – Since 2011, the Bobriwka campsite in northwestern Connecticut has hosted a weeklong music workshop where children and parents have learned how to play the traditional Ukrainian instrument, the bandura. This year, in addition to the usual bandura lessons, choral rehearsals, nature walks, sports and outdoor activities, the children and parents at the “Bandura at Bobriwka” reunion were privileged to host a very special guest

On July 28, Dr. Leon Chameides, a retired pediatric cardiologist from West Hartford, Conn., gave a very poignant lecture in which he shared his harrowing experiences as a Jewish child who survived the Holocaust with the help of Metropolitan-Archbishop Andrey Sheptytsky and a network of heroic Ukrainian Catholics who provided sanctuary at various locations, including the Univ Monastery near Lviv.

Over 50 children and 20 adults listened in rapt silence as Dr. Chameides shared his memories as a 7-year-old child who witnessed the ravages of war and the Nazi occupation of Ukraine. His father was the assistant chief rabbi of Lviv and a friend of Metropolitan Sheptytsky. As anti-Jewish violence escalated following the Nazi invasion in 1941, Rabbi Chameides brought his 7-year-old son to the metropolitan’s residence at St. George Cathedral and asked him for safekeeping.

“I did not speak any Ukrainian at that time, only Polish and German,” said Dr. Chameides, “so I did not understand what the archbishop was saying, but he tweaked my cheek and looked at me kindly.”

By 1941, Metropolitan Andrey was wheelchair bound and in frail health, but he still exercised powerful moral authority in western Ukraine, where he exhorted his faithful not to take part in the Nazi persecution of Jews and strongly denounced Nazi atrocities, even writing a letter of protest to SS Reichsführer Heinrich Himmler.

Although he had a very brief encounter with the metropolitan, the meeting left an indelible impression on young Leon, and Dr. Chameides expressed gratitude to the metropolitan and to the many priests, monks and lay Catholics who risked their lives to shelter him and other Jewish friends and neighbors.

Dr. Chameides recalled a particularly chilling episode when he rode a trolley car with a priest on his way to the Univ monastery. A German officer boarded the car, sat next to the priest and tried to engage the boy in conversation. Somehow, young Leon realized that he should not respond to the officer, as he would arouse suspicion that he was Jewish. Later, Leon fell into despair as he was forced to hike from the end of the trolley line, through the woods, with the priest and began to collapse from exhaustion. The priest had to slap the boy to keep him moving so he would not freeze to death in the woods.

Once in Univ, Leon was given a Christian name, Levko Kaminsky. He and other Jewish children had to learn to speak Ukrainian, including various prayers such as “Otche Nash”(Our Father) and parts of the Church Slavonic liturgies, so that if the Germans ever raided the monastery, they could pose as Catholic orphans.

In 1943-1944, the Soviet Army returned to the Lviv region, and fierce battles erupted between German and Russian forces, as well as various partisan groups operating in the area. A makeshift hospital was established at the monastery, and young Leon volunteered to go into the woods to retrieve medical kits and bandages from the corpses of soldiers that lay strewn in the wilderness. During the question and answer session, some of the children at Bobriwka asked whether Dr. Chameides was afraid to find or touch dead bodies. Dr. Chameides responded that, by that time, seeing dead bodies had become commonplace in Ukraine, and he did not feel much revulsion or fear.

Years after the war, once Dr. Chameides had emigrated to the United States, he was able to identify and track down some of the other Jewish survivors who had lived under various pseudonyms at the Univ Monastery. Among some of the illustrious survivors, he mentioned David Rothbard, the former minister of foreign affairs of Poland, and Dr. Rouald Hoffman, a Nobel Prize winner who teaches chemistry at Cornell University. Earlier this year, Dr. Rothbard nominated Bishop Borys Gudziak for an honorary doctorate awarded at his undergraduate alma mater, Syracuse University.

At the conclusion of the lecture, Alexander Kuzma, the chief development officer for the Ukrainian Catholic Education Foundation, thanked Dr. Chameides for coming to Bobriwka and sharing his experience with the children. He also thanked him for his passionate advocacy to gain recognition for Metropolitan Andrey (1865-1944) as a “Righteous Gentile” at the Yad Vashem, including his testimony before the Canadian Parliament and his help in securing the Jan Karski Medal of Courage that was awarded to the metropolitan in 2013 by the Anti-Defamation League.

Dr. Chameides urged his audience to learn from history and to show compassion for the persecuted. He pointed out that responsibility for the Holocaust lay not only with the Nazis, but with the millions of Germans who voted Hitler into office.

Following the lecture, Dr. Chameides and his wife, Jean, joined the staff for dinner. They attended the evening rehearsal, at which the children sang Ukrainian songs and showcased some of their skills in playing the bandura.

Over 3,000 Ukrainians have now been honored at the Yad Vashem in Jerusalem for their heroism in sheltering Jews from the Nazis. Dr. Chameides and other Holocaust survivors have expressed a willingness to present similar lectures to Ukrainian and Jewish audiences in the United States. Anyone interested in organizing such a lecture in their community is urged to contact the Ukrainian Catholic Education Foundation at (773)235-8462, or to contact Matthew Matuszak at matuszak@ucef.org.