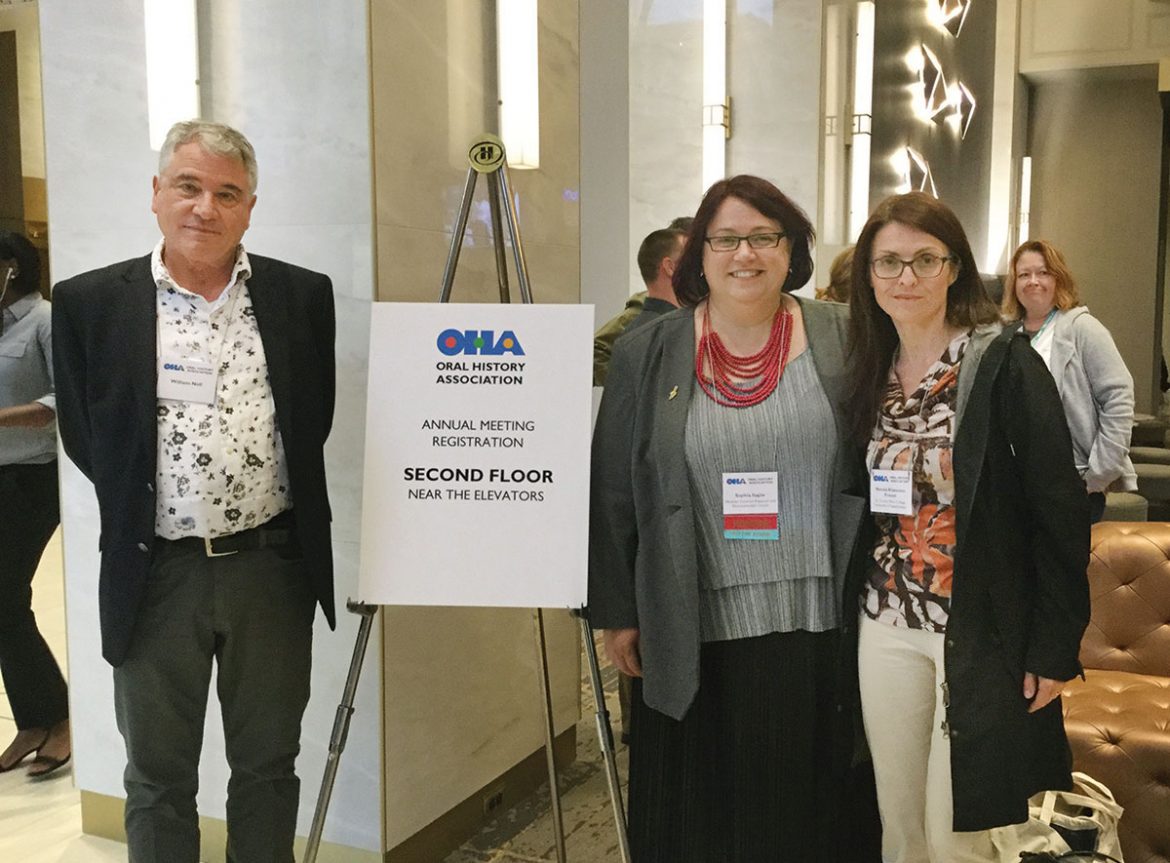 At the annual meeting of the Oral History Association (from left) are: William Noll, Sophia Isajiw and Natalia Khanenko-Friesen, who presented at a roundtable on the role of oral history in studying the Holodomor.

MINNEAPOLIS – Four researchers of the Holodomor presented their findings at the annual meeting of the Oral History Association (OHA). The theme of the international conference, which took place October 4-7 in Minneapolis, was “Engaging Audiences: Oral History and the Public.”

OHA is the major organization devoted to oral history, a field that approaches history through interviews with people having personal knowledge of past events.

Brent Bezo, Natlia Khanenko-Friesen, Sophia Isajiw and William Noll engaged conference participants in a roundtable discussion “Intergenerational Consequences of the Holodomor in Ukraine (1932-1933 Famine): What Oral History Accounts from Ukraine and the Diaspora Tell Us.” Their participation was supported by the Holodomor Research and Education Consortium (HREC) of the Canadian Institute of Ukrainian Studies, University of Alberta.

The researchers traced the arc of trauma from the Soviet collectivization of farmers through to the Holodomor and the legacy of genocide on the children and grandchildren of survivors. The speakers also explored the role of oral history in shaping a narrative of the Holodomor and the implications of long-term, intergenerational transmission of collective trauma.

Mr. Bezo, Ph.D. candidate in psychology at Carleton University in Ottawa, discussed his research on perceptions of the Holodomor’s impact on physical health and well being by three generations within 15 survivor families in Ukraine. His study is one of the first to analyze the Holodomor’s psychological legacy in Ukraine.

Ms. Isajiw, project manager and researcher of oral history projects at the Ukrainian Canadian Research and Documentation Center (UCRDC) and assistant to the director of education at HREC, Toronto, presented her analysis of her 2015 oral history study “Children of Holodomor Survivors Speak” (ucrdc.org/cohs). This is the first study to analyze the effects of the Holodomor on the second generation of survivors in the diaspora. Ms. Isajiw received an international scholarship from OHA to support her conference participation – one of only five awarded.

Dr. Noll, an ethnomusicologist and cultural historian, spoke about his groundbreaking study “Transformation of Civil Society,” which examined village life and community organization prior to, during and after collectivization in Ukraine. The study was based on large-scale oral history field work conducted by Dr. Noll and a group of Ukrainian scholars, who produced 429 eyewitness accounts from elderly Ukrainian villagers.

Ms. Khanenko-Friesen, professor of anthropology in the Department of Religion and Culture at St. Thomas More College at the University of Saskatchewan, discussed her recent work in digitizing Dr. Noll’s oral history field work and creating an online database at the Prairie Center for the Study of Ukrainian Heritage Oral History Program. The database features 126 of the testimonies from villagers across central and eastern Ukraine (http://drc.usask.ca/projects/pcuh/transformation/eng/). Prof. Khanenko-Friesen also acted as roundtable moderator, providing needed background on collectivization and the history of the Holodomor.

Marta Baziuk, executive director of HREC, stated that HREC’s intention in organizing the roundtable was to bring to the attention of oral historians the critical role of survivor interviews in reclaiming the history of the Holodomor. “In the past, HREC has organized conferences to demonstrate to researchers in fields such as genocide studies the relevance of the Holodomor to their work. This time, we decided that rather than holding a conference on the Holodomor and oral history, we would go to where oral history practitioners meet,” she said.

Attending the annual conference was a first for all four researchers, as was the opportunity to meet and compare findings. The audience at the roundtable session was engaged and reflective; it is perhaps not surprising that oral historians are the perfect audience because they listen well, are curious and ask good questions.

A revealing question posed during discussion, about whether Ukrainians self-identified as victims and survivors after the genocide, prompted an interesting comparison between Dr. Noll’s and Mr. Bezo’s research in Ukraine. As Mr. Bezo commented afterwards: “I found it fascinating to hear in Bill’s research of 15-20 years ago that Ukrainians in Ukraine did not necessarily consider themselves to be ‘survivors’ of the Holodomor. But, when I conducted my research in 2010, Ukrainians in many regions of Ukraine considered themselves to be survivors, or descendants of Holodomor survivors. This change in perspective suggests that, over time, Ukrainians are reflecting upon and making sense of their past history.”

Commenting on the organization of the roundtable, Dr. Noll said, “Presenting the papers in the chronological order of the age of the interviewees worked well.”

In summarizing the value of attendance at the conference, Prof. Khanenko-Friesen said: “As scholars of the Holodomor we need to maintain ongoing open dialogue with those whose work focuses on famines, genocides and other mass human rights violations around the world. Digitization of research findings is another way of further promoting Holodomor studies as is networking with scholars in digital humanities. The work of UCRDC and HREC intersects with research conducted at the Center for Oral History and Digital Storytelling at Concordia University in Montreal, whose director, renowned oral historian Steven High, attended the Holodomor roundtable.”

In fact, in 2018 the OHA annual conference will be held at Concordia.

By participating in the roundtable panel at the OHA conference, the four Holodomor scholars brought awareness of their research to a community of interested scholars and promoted further awareness, wider research and future collaboration.