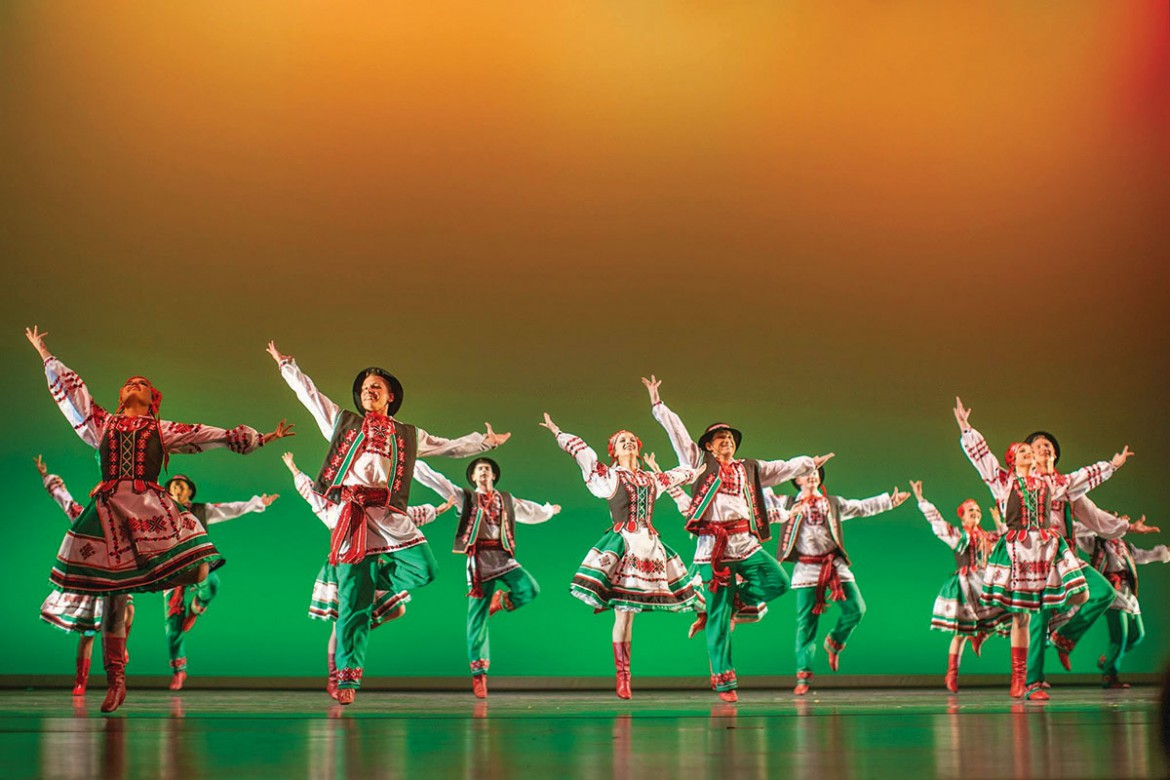 The Hromovytsia Ukrainian Dance Ensemble during a performance at Chicago’s Harris Theater in April 2014 in the dance “Never Forget.”

CHICAGO – The story of the Hromovytsia Ukrainian Dance Ensemble story began in 1980. It started with a dream – a dream driven by love, passion, and pride of the Ukrainian heritage.  It was when Roxana Dykyj, along with her husband, Ivan Pylypczak, and fellow dancers, embarked on a journey to establish a dance company that would showcase Ukrainian culture in the Ukrainian diaspora and the world.

Thirty-five years later, the company comprises over 45 dancers age 18-40 dedicated to reshaping the very definition of Ukrainian dance. There is also a much larger Ukrainian School of Dance affiliated with the troupe; talented young dancers have an opportunity to graduate to the top group, Hromovytsia. 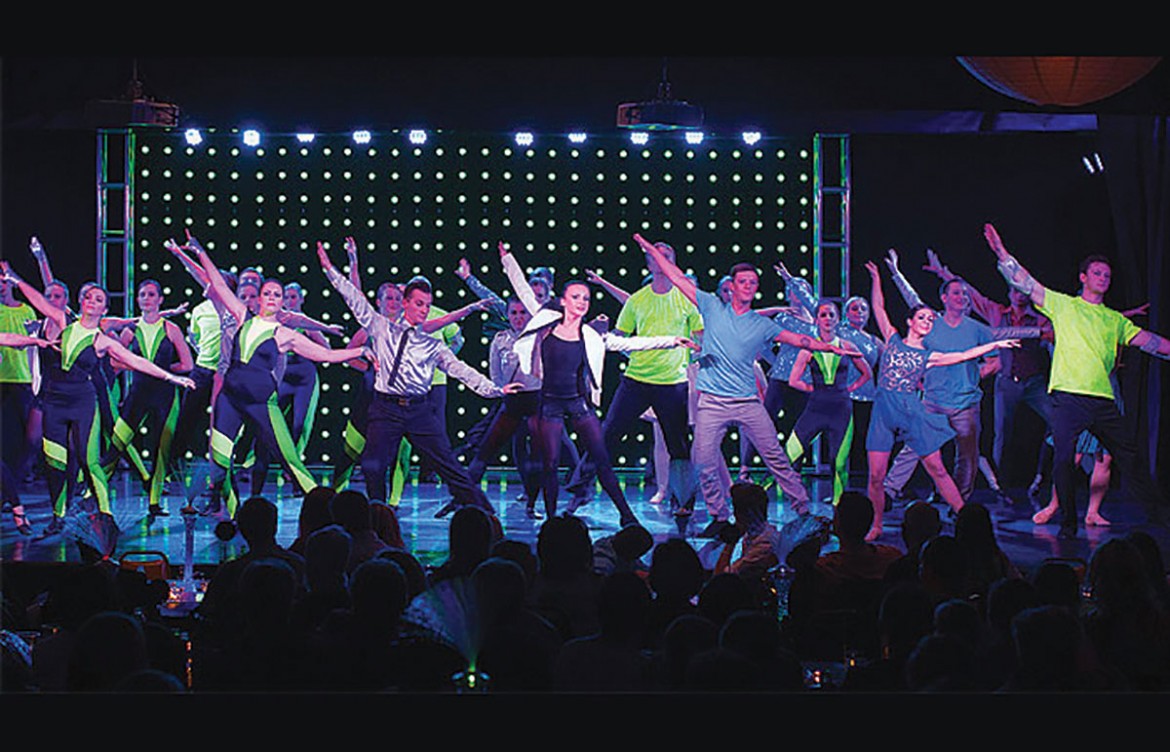 Commitment to the future

Hromovytsia continually supports the community by performing at festivals and significant events, but the most exciting night is its annual fund-raising event known as Cabaret Night, when the company surprises the audience with an innovative performance.  Last year, when the performance also celebrated the dance ensemble’s landmark 35th anniversary, the focus was on the future.  Titled “Cabaret 2092,” the performance featured modern futuristic choreography and costumes, electronic music, and computer-like dancers in raw, energetic, hip-hop moves that captivated the audience.  Bowing to tradition in the final number, the robotic dancers turned Ukrainian by donning red boots and Ukrainian headpieces for the performance of the beloved “Hopak.”

Influenced by the passion of the Maidan revolution and the emotional video “I am Ukrainian” by Yulia Marushevska, the ensemble emulated the original clip with a loud declaration, “I am Hromovytsia!  I am Ukrainian!”  The audience rose in support.  At that moment the message was clear: although technology has altered the way society lives, for Ukrainians throughout the world, even in 2092 and beyond, the commitment to Ukraine’s independence and freedom will remain unchanged.

Honor the past to build the future

In November 2013, at Chicago’s spectacular Harris Theater, Hromovytsia performed the premier of the ballet “Holodomor,” choreographed by the ensemble’s director, Roxana Dyka Pylypczak, and her daughter, Daniela Pylypczak Wasylyszyn, assistant director and dancer.  The ensemble was invited to perform the same ballet in Washington on November 8, 2015, at George Washington University’s Lisner Auditorium at the concert marking the opening of the Holodomor Memorial erected to remember the millions of victims who perished in that genocide.

Set to composer Myroslav Skoryk’s haunting, evocative composition “Melodia,” the ballet set the mood for the solemn occasion.  The set design was minimal, somber and austere, with lighting of shadows and paleness.  The music and choreography conveyed national pain and lament.  One could feel the desire of the dancers to communicate their message and connect a feeling of loss and emptiness with the audience. 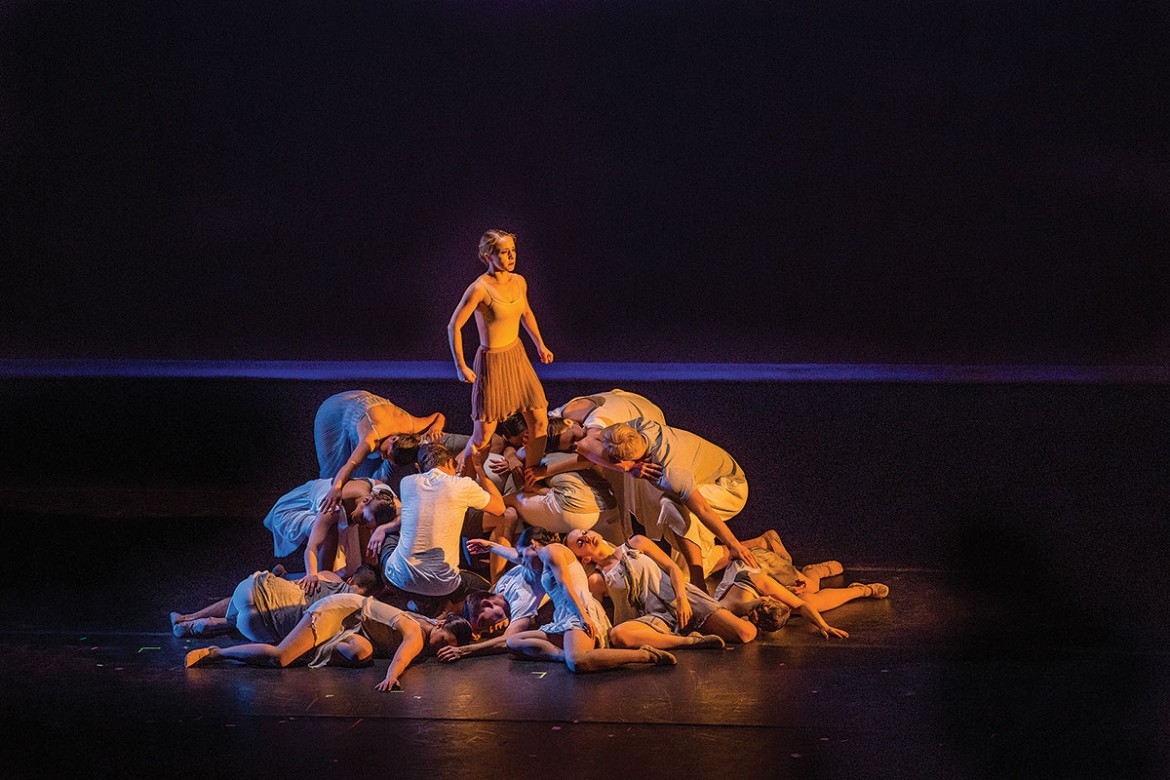 Hromovytsia performs the ballet “Holodomor” during the concert held in Washington on the occasion of the Holodomor Memorial dedication in November 2015.

As soloist, Ms. Wasylyszyn used the vocabulary of her body to personify Ukraine as a nation in mourning and Ukrainians as individuals who suffer, mourn, heal, persevere and assert their power of survival and freedom.  The backdrop of diminished pastel colors and lighting, of emotional linear music and the symbolic movements of the dancers expressed the unspeakable tragedy of death, separation and suffering of the Holodomor. And yet, in the final scene, the message was one of healing and determination to live and build a nation.  The physical interaction and contortions between the bodies illustrated the suffering of those who perished, yet the final scene of bodies piled one on top of each other with the principal dancer standing on top in an erect posture with her fist up in defiance, sent a message of survival, endurance and hope.

The role of the Hromovytsia dance ensemble as an ambassador of Ukrainian culture supporting the aspirations of the Ukrainian nation is one of the group’s main priorities.  Cultural expression as a diplomatic tool that presents the face of a nation and a community should not be underestimated.

Hromovytsia’s choreographic works send a message that can be more powerful than speeches or articles.  This “soft-power” diplomacy is one that mature nations understand and use as one of their priorities to communicate their culture and their values.  Hopefully, it is a form of diplomacy that Ukraine’s government will support through its ministries and organizations to convey the message and the positive brand that Ukraine deserves.