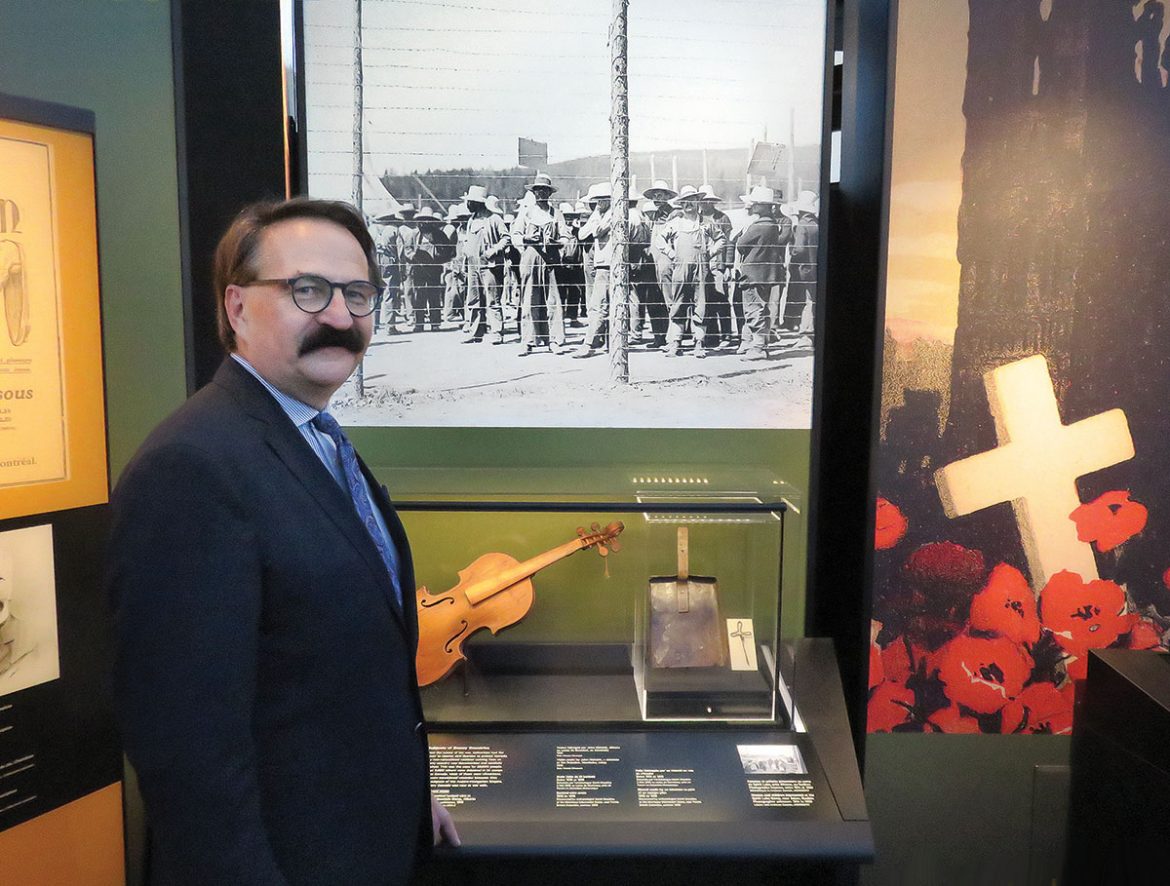 Lubomyr Luciuk on June 12 at the internment exhibit at the Canadian Museum of History.

It’s a small case in a big hall. I have no idea how many people will pause beside it, but millions of visitors will eventually tour through the Canadian History Hall. The first guests entering this newly renovated space within the Canadian Museum of History will arrive on July 1, Canada Day, which this year is the 150th birthday of our country. Odds are that more than a few will stop where I did. That’s good.

Canada’s history has generally been righteous, even if what awaits a passer-by in this particular case may seem to suggest otherwise. Its contents recall how thousands of Ukrainians and other Europeans were branded as “enemy aliens” during Canada’s first national internment operations of 1914-1920. Needlessly imprisoned, with what little wealth they had confiscated, they were forced to do heavy labor for the profit of their jailers, disenfranchised and subjected to other state-sanctioned indignities – not because of any wrong they had done but only because of who they were, where they had come from.

These internment operations were all but forgotten until 1978, when, fatefully, I spoke with Nick Sakaliuk, a Ukrainian immigrant from Bukovyna who had been a prisoner in Kingston’s Fort Henry, then at camps in Petawawa and Kapuskasing. In the late 1980s I met another victim, Mary Manko Haskett, a Montreal-born Ukrainian who, along with the rest of her family, was transported into the wilderness of Quebec’s Abitibi region. Her sister Nellie died at the Spirit Lake internment camp, her final resting place still uncertain.

Survivors like Mary and Nick wanted their stories remembered. Naively, I expected that would be simply achieved. But it took over two decades for the Ukrainian Canadian Civil Liberties Association, spearheading the campaign for recognition and symbolic redress, to secure an official acknowledgement – even though we never asked for an apology or compensation, resolutely following Mary’s prescript that our efforts should be “about memory, not money.”

Finally, in 2008, the Canadian First World War Internment Recognition Fund (www.internmentcanada.ca) was created with a mandate to support commemorative and educational projects reminding Canadians of why we must all remain vigilant in defense of human rights and civil liberties, particularly in periods of domestic or international crisis.

The internment exhibit in the Canadian History Hall is one of that fund’s legacy projects. As I stood there, I recalled a text I found years ago while sleuthing through microfilm copies of The Daily British Whig. On September 7, 1917, an unknown editor, challenging the Wartime Elections Act that stripped voting rights from tens of thousands of “enemy aliens” while enfranchising women, wrote presciently: “It is quite probable that if this proposal becomes law the alleged ‘foreigners’ and hitherto ‘naturalized’ Canadians will bear their reproach meekly, but they will have sown in their hearts the seeds of a bitterness that can never be extirpated. The man whose honor has been mistrusted, and who has been singled out for a national humiliation, will remember it and sooner or later, it will have to be atoned for.”

One hundred years later I think we have arrived at that time for atonement.

We got here in good company. I cannot list everyone who helped us tell the internees’ stories but will select two. There is my friend, Inky Mark, a Chinese Canadian parliamentarian from Dauphin, Manitoba. He understood what we were doing, and why, because his own family once suffered the insult of the racist Head Tax. Mr. Mark’s private member’s bill, C-331: The Ukrainian Canadian Restitution Act, obliged the federal government to redress an historical injustice, despite the rearguard artifices of many a bigoted bureaucrat.

Years later, the very fund his work created would help support the archaeological dig of Sarah Beaulieu, a Ph.D. candidate at Simon Fraser University. Ms. Beaulieu would unearth two artifacts from the Morrissey internment site in British Columbia, exposing them again to the light of day for you to see. One is a homemade shovel used by internees unsuccessfully attempting to tunnel their way out of captivity – evidence enough of how determined and desperate these men were to escape. The other is an even more telling relic, a small cross made of barbed wire. We will never know who fashioned it, but certainly he was a man of faith.

Finding this Christian symbol of hope and atonement in this marvelous hall of things past, I was reminded of how Canada is a better place for being a country where even the tragic stories of Mary and Nick are told – people just like you and me. So as I walked away, I was smiling at the thought that there’s just no place like home. Happy birthday, Canada.

Lubomyr Luciuk is a professor of political geography at The Royal Military College of Canada.