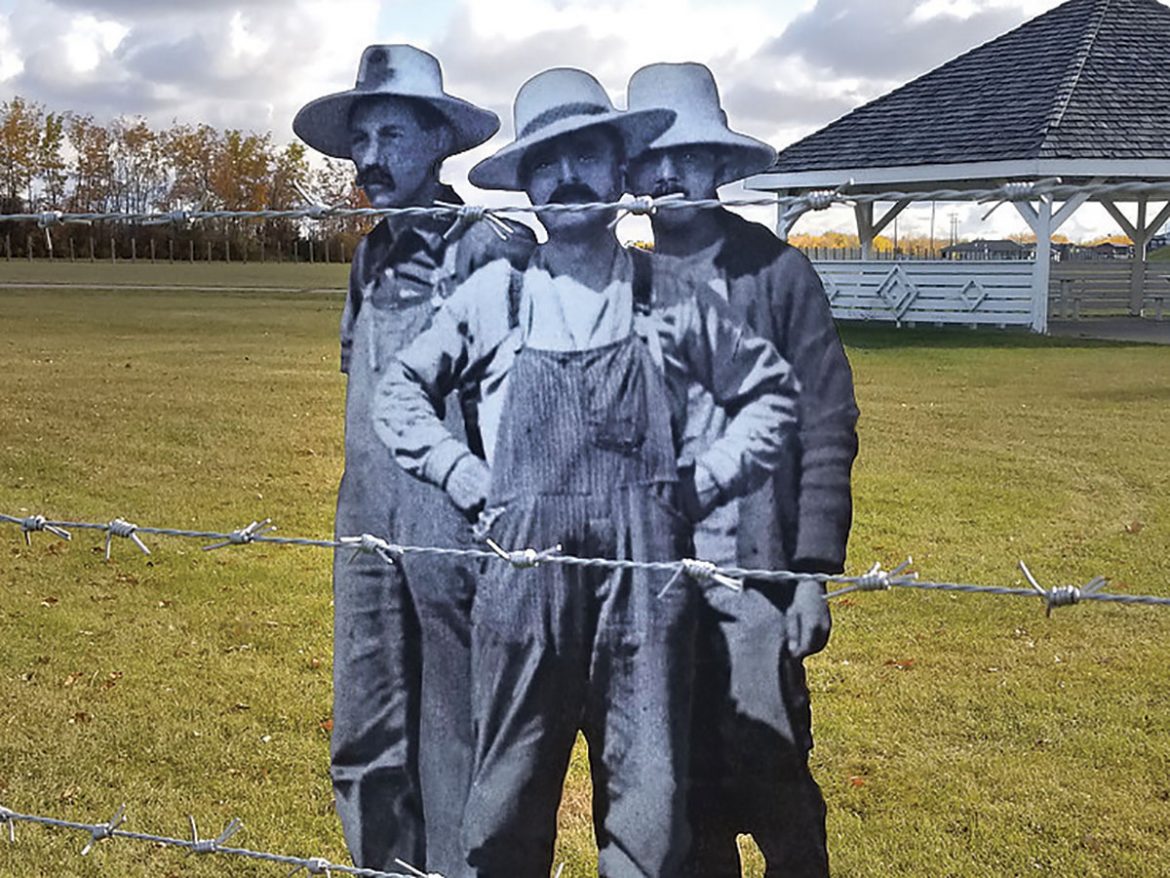 The monument titled “21 Strands,” which was unveiled in St. Paul, Alberta, includes an image of internees standing behind 21 horizontal lengths of Canadian barbed wire. The design is by Amil Shapka.

Titled “21 Strands,” the monument is unique, comprising not just a trilingual (English-French-Ukrainian) educational plaque, but also an image of internees standing behind 21 horizontal lengths of Canadian barbed wire. The design is by Amil Shapka, a resident of St. Paul who spearheaded the efforts to erect this monument in his hometown.

Dr. Shapka told The Ukrainian Weekly that the memorial “was intended to provoke a response by being able to view it from both sides: it is one experience to be on the outside looking in at the internees, and a complete and surprisingly different one to stand beside them, inside, and look out at the freedom beyond the wire.”

The internment operations of 1914-1920 affected some 90,000 civilians, who were arrested, interned, dispossessed of their wealth, made to work or forced to regularly register with the police. The majority of those unjustly interned as enemy aliens under the War Measures Act were Ukrainians, who were invited by the Dominion government to settle Canada.

Well over 100 people attended the unveiling ceremony, presided over by Caroline Yewchin from the local Ukrainian community. Among those who spoke or laid wreaths were St. Paul Mayor Maureen Miller; the chairperson of Champions for Change, Penny Fox; a representative of the local branch of the Royal Canadian Legion; as well as delegates from the Edmonton Chapter of the League of Ukrainian Canadians.

Father Peter Haugen of All Saints Ukrainian Orthodox Church and Father Andrij Nykyforuk of Protection of the Blessed Virgin Mary Ukrainian Catholic Church jointly blessed the monument and the accompanying interpretive panel. In addition, they conducted a memorial service (panakhyda) for the internees.

“We’re very pleased with the evocative appearance of the monument, as well as the local turnout for the unveiling,” said newly elected UCCLF Chair Borys Sydoruk. “I’d like to thank the St. Paul community, particularly Dr. Amil Shapka and his son Tanis, for their extraordinary efforts in making this monument possible. We couldn’t have done it without them and so many others, and we hope to do similar educational and commemorative projects throughout Kalyna Country, and elsewhere in Canada.”

UCCLF members gathered for the ceremony in St. Paul also discussed near future initiatives, including a project title “Heroes of Their Day,” which will honor the Ukrainian Canadian men and women who volunteered for overseas duty during World War II, some of whom helped rescue and settle Ukrainian displaced persons from war-torn Europe to Canada.

This project will involve the unveiling of a commemorative stained-glass window in London, England, in the spring of 2020. The public is invited to financially support this project and others by donating at www.ucclf.ca.