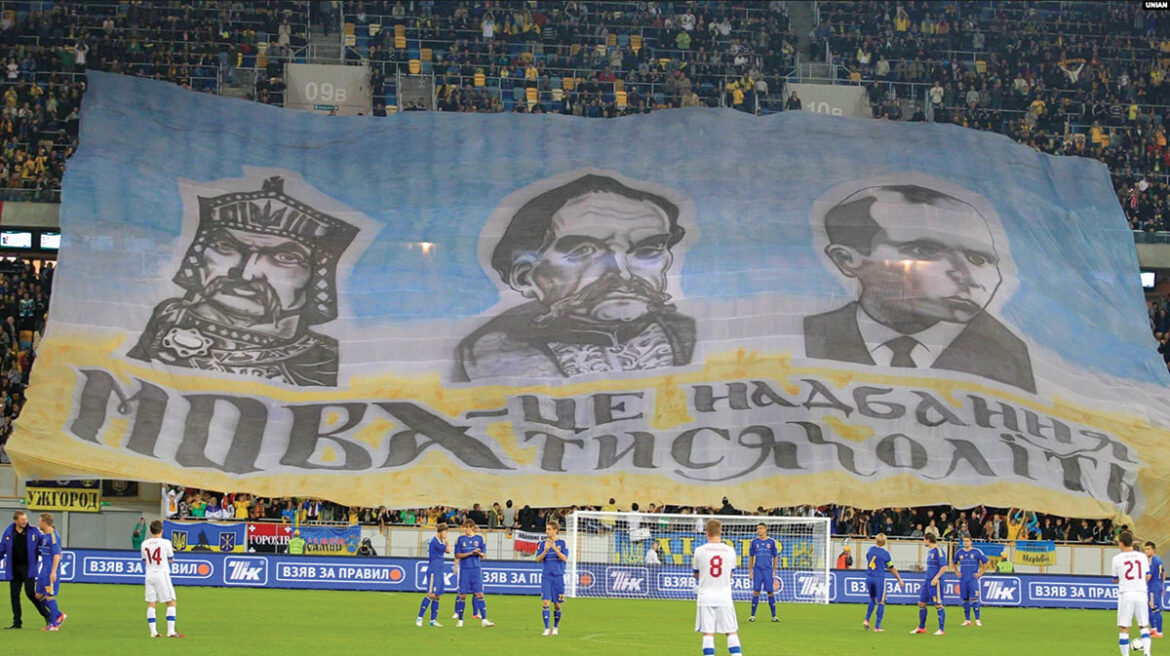 Spectators hold a banner with portraits of Prince Volodymyr the Great, Hetman Ivan Mazepa, OUN leader Stepan Bandera during a football match between Ukraine and the Czech Republic in Arena Lviv on August 15, 2012.

LVIV – The Lviv regional council approved an appeal to the Cabinet of Ministers of Ukraine on March 16 requesting that the largest stadium here be renamed after Stepan Bandera, the former leader of the Organization of Ukrainian Nationalists (OUN). The move came after the Ternopil city council on March 5 renamed its largest stadium after Ukrainian Insurgent Army (UPA) commander Roman Shukhevych.

Israel’s Ambassador to Ukraine, Joel Lion, condemned the decision on March 9, while representatives from the Polish city Zamość said they had suspended relations with Ternopil and abandoned a joint project with the city.

The announcement to rename the recently rebuilt stadium in Ternopil was made on March 5, which marks the 71st anniversary of Shukhevych’s death in 1950.

“On this significant day we honor the memory of the hero of Ukraine, Commander-in-Chief of the Ukrainian Insurgent Army Roman Shukhevych,” Serhiy Nadal, the mayor of Ternopil said in announcing the move on March 5. “It is very symbolic that we make an important decision to name the central stadium in his honor. The UPA leader was not only an exemplary commander but also a good athlete and leader in many sports.”

Members of the Ternopil city council unanimously approved the initiative, which was done to honor “Shukhevych’s courage, steadfastness in the national liberation struggle and self-sacrifice in the name of the Ukrainian people,” the city council said in statement.

Mr. Lion, Israel’s ambassador to Ukraine, blasted the decision in a statement posted on Twitter.

“We strongly condemn the decision of Ternopil city council to name the city stadium after the infamous Hauptman of the SS Schutzmannschaft 201 Roman Shukhevych and demand the immediate cancellation of this decision,” Mr. Lion wrote on March 9.

Mr. Nadal, the mayor of Ternopil, addressed the Isreali ambassador’s statement, noting that Mr. Lion had been misled by Soviet historiography.

“Today all KGB archives and SBU archives are open. You can read who killed Jews and what the UPA actually fought for. Everyone knows that Roman Shukhevych and his family helped hide Jewish children from the Nazis. He saved their lives,” Mr. Nadal said.

Meanwhile, on March 10, the mayor of the Polish city Zamość, Andrzej Wnuk, released a statement saying that the Polish city was suspending relations with Ternopil and abandoning a joint project with the town as a direct result of the decision by the Ternopil city council to rename its stadium after the UPA commander.

“I respect the right of every people to have their own understanding of history. However, I cannot ignore the brutality of the war and the disrespect for the defenseless victims of the Polish people,” Mr. Wnuk said, referring to the killing of Poles in the Volyn region during World War II.

Mr. Wnuk said the city of Zamość suspended all relations with authorities in Ternopil. He added that a joint Polish-Ukrainian project “Common History of Two Cities – Ternopil and Zamost” would not be implemented. The project was set to receive funding of 68,713 euros (roughly $82,000) from the European Union under the Poland-Belarus-Ukraine Border Cooperation Program.

“I believe that our Ukrainian partners will understand that any initiative to glorify war criminals has consequences. Any such initiative must consider the feelings of the families of the victims and the Polish people,” Mr. Wnuk said.

Ukraine’s Ministry of Foreign Affairs commented on the dispute, noting that preserving Ukraine’s national memory remains one of the country’s top policy priorities.

“Discussions in this area should take place at the level of historians,” Oleg Nikolenko, a spokesman for the Ukrainian Ministry of Foreign Affairs wrote on Twitter.

“Instead, diplomats should work to strengthen friendly relations and mutual respect between peoples, not the other way around,” Mr. Nikolenko wrote.

In Lviv the regional council on March 16 approved by a vote of 51-33 an appeal to the Cabinet of Ministers of Ukraine to rename Arena Lviv in honor of Stepan Bandera.
“Arena Lviv is the central sports facility in the region, where key events are held.

Therefore, naming the stadium after Stepan Bandera will be of key importance in the formation of national consciousness and will contribute to the patriotic education of young people,” the regional council wrote in their appeal to the Cabinet of Ministers.

“Bandera is a hero of Ukraine, and the European Solidarity faction [in the Lviv regional council] decided to name the stadium in his honor,” said Olha Bereziuk, a member of the council.

A final decision to approve the request must be made by the Cabinet of Ministers, as the stadium, which hosted three Euro 2012 football matches and several other important international matches, is state-owned. The Lviv regional council has repeatedly requested that ownership of the arena be transferred to the local community, but the stadium remains under the control of the Ukrainian government.

Stephen Bandera, Bandera’s grandson, learned about the initiative in Lviv from The Weekly’s correspondent when asked to comment on the news.

“It’s more about creating hype,” Mr. Ban­dera said, emphasizing that it is not up to the Lviv regional council to rename the stadium.

“It is always humbling and honor on the one hand, but then you feel something different when someone has to guard the memorial, clean up the graffiti, replace the headstone, or scrub the paint off the statue,” Mr. Bandera said, referring to the many occasions on which memorials and statues honoring the late OUN leader were defaced or vandalized.

“Our faction did not vote at all on this issue,” said Ivanna Herus, the head of the Holos faction in the Lviv regional council. “The council accepted more than 20 appeals by one vote, and we did not agree with all of them, so we did not take part in this voting. Some of them are about the financing of education, some more political. For example, one of the appeals is to give Roman Shukhevych the title of Hero of Ukraine,” Ms. Herus said.

According to Ms. Herus, the Holos faction supports the stadium’s renaming, but they believe Ukraine has other national heroes who deserve the honor.

“If the stadium is a sports venue, then it should be named after an athlete,” Ms. Herus said. “We have a lot of them, for example Ivan Boberskyy.”

But Ms. Herus also said that she does not believe renaming Arena Lviv is a top priority.
“We have a lot of problems in the country,” she said. “For example, in education there is a need to reform a lot of things instead of spending time on what will likely not be done [renaming the stadium].”

Vakhtang Kipiani, a historian and editor of the web site Istorychna Pravda (Historical Truth), expected a harsh reaction to the news, both in Ukraine and abroad.

“We can ignore Russians, but it is obvious that our Polish friends’ reaction will be painful,” Mr. Kipiani said, according to the Lviv newspaper Vysokyy Zamok.

“On the one hand, national memory cannot be adjusted to other people’s ideas,” Mr. Kipiani said. “On the other hand, we, figuratively speaking, live in a glass house. And we will always have to explain to our neighbors why we did this or that.”

He also noted that Ukrainians shouldn’t create a cult around Bandera and Shukhe­vych by naming too many monuments, stadiums or other structures after both men.

“Let’s not make Lenin out of Bandera and Shukhevych,” Mr. Kipiani said. “Literally, everything was named after Lenin, Kirov, Kalinin in Soviet times. Nowadays, we can name many different objects – streets, squares, parks – after other prominent Ukrainians.”

When asked to comment on the international reaction against the moves to rename the stadiums, Mr. Bandera, the OUN leader’s grandson, said he didn’t feel comfortable commenting on the issue.

“It’s not really my place as a Canadian to comment on governmental decisions in foreign jurisdictions,” Mr. Bandera said. “So, I’m surprised that the ambassadors of foreign countries feel they can make comments and demands about what are really internal state matters.”

“When it comes to the particular case of the Lviv stadium, I’ll support anything that’ll help Karpaty FC win more games,” he said, referring to the name of the professional soccer team based in the stadium. In 2020 Karpaty FC was excluded from the Ukrainian Premier League due to lack of funding. The club now plays in the third Ukrainian football division and is last place in the standings.