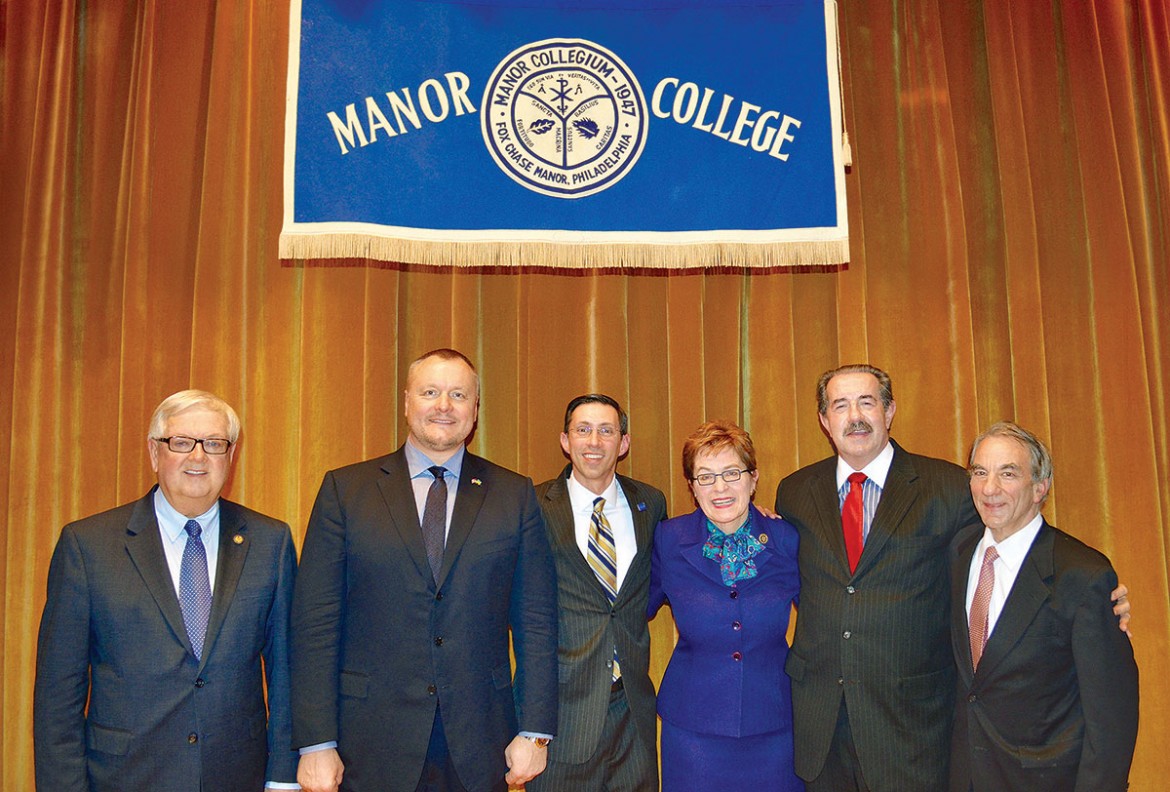 “Ukraine 2016: A Stability Dialogue at Manor College” was attended by more than 150 people, who crowded the Manor College auditorium for the program. Manor President Jonathan Peri began by noting that Manor is the only Ukrainian heritage college in the country, and is home to a growing collection of Ukrainian cultural and historical artifacts, including a symbolic piece of a decommissioned nuclear warhead from Ukraine that was gifted to the college by Rep. Weldon. Mr. Peri also thanked the speakers and presented them with honorary plaques marking the occasion.

Mr. Weldon began the speaking program by covering the diplomatic history between Ukraine and the United States. He pointed to the Jackson-Vanik Amendment of 1974, which impacted trade relations between the U.S. and former Soviet republics, and noted that Ukraine should have been graduated from its restrictions much earlier, as soon as the Soviet Union broke apart.

“We as a nation have let Ukraine down,” he said. “And while the news media focuses on ISIS/ISIL, and the Middle East and Northern Africa and North Korea, we have an obligation to focus on people who are just like us, who share the same values…” He underscored that Ukraine was the first of the Soviet republics that voluntarily gave up its nuclear arsenal, adding, “We have an obligation to help these people.” Mr. Weldon urged bipartisan support for continued relations with the current government of Ukraine.

Mr. Artemenko, a member of the Ukrainian Parliament, began his portion of the program by asking for a moment of silence to honor the more than 10,000 Ukrainians who have died as a result of the ongoing conflict with Russia. As chairman of the Solidarity of Right Forces party in Ukraine’s coalition government, Mr. Artemenko advocated support for President Petro Poroshenko and stressed the importance of stabilizing Ukraine financially as keys to future prosperity.

A Ukrainian businessman and investor who has spent decades working in areas of international commodities and facilities, Mr. Rovt spoke about engaging youth as a key to future stability in Ukraine, a common theme cited by many of the other speakers.

Congresswoman Kaptur took this concept a step further, noting that the Internet has made world cultures available to Ukrainian youth at the touch of a button. She stressed the need for expanded cultural and family exchange programs between the United States and Ukraine, which will ensure that U.S. aid dollars are well spent.

A former defense advisor to the U.S. Mission to NATO, Mr. Weinrod closed the program by presenting a geopolitical perspective on the Russia-Ukraine conflict. He touted the academic and policy think tank consensus as proof that a stable Ukraine is good for both Eastern Europe and the international community. He suggested developing more bipartisan support and bringing Ukraine closer to NATO as primary goals for lasting peace.

The entire program can be viewed on YouTube at https://www.youtube.com/watch?v=NbLArcq_bV4.

Located in suburban Philadelphia, Manor College is a private two-year institution offering transfer and career-oriented programs to traditional age and adult students. Manor was founded in 1947 by the Ukrainian Sisters of St. Basil the Great. As an institution of higher learning related to the Ukrainian Catholic Church of the Eastern tradition, the college is committed to the preservation of its spiritual and ethnic heritage. For more information see http://www.Manor.edu.