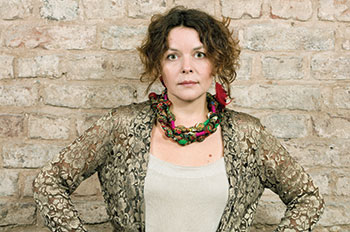 Mariana Sadovska is the musical director and composer for the Wilma Theater’s new production “Adapt!” in Philadelphia.

PHILADELPHIA – Mariana Sadovska, Ukrainian composer, singer and actor, has returned to the U.S. as musical director and composer for “Adapt!” – a new play about a refugee’s journey being presented at the award-winning Wilma Theater in Philadelphia.

“Adapt!” tells the story of 22-year-old Lenka who flees authoritarian Czechoslovakia in the 1970s. Written by Wilma Theater director Blanka Zizka based on her own life, “Adapt!” will resonate with many in the Ukrainian diaspora who are refugees themselves or the children and grandchildren of refugees.

Ms. Sadovska, originally from Lviv and now living in Cologne, Germany, was invited by Ms. Zizka to collaborate on the play after she saw Ms. Sadovska last year in Philadelphia, at a performance that was almost cancelled by a snowstorm. “I just loved the concert so much, “Ms. Zizka said. “There is something so beautifully authentic about her singing.”

The feeling was mutual for Ms. Sadovska. “The moment I read the script, I felt a very strong connection to her work. This was a group working at a deep level to present authentic theater. The play touched me as a Ukrainian very personally and directly.”

Ms. Sadovska believes that “Adapt!” reveals the parallel destinies and tragic experiences shared by all post-Soviet countries. “There are many similarities between the history of Ukraine, especially in the Soviet period, and the history of the Czech Republic,” she says. “It is not only in Ukraine that we lived through the invasion, it also happened in the Czech Republic, it also happened in Poland, and in other countries.”

“History was not kind to Central Europeans or Ukrainians,” Ms. Zizka says. “That is very much part of the play.”

In 1976, Ms. Zizka fled the repressive environment of Czechoslovakia, where she had no chance to study or work in the field she loved – theater. She sought asylum first in Germany, living in three different refugee camps, which were subsequently closed because of unsanitary conditions. She was 22 years old, newly pregnant and alone, separated from her partner by the bureaucratic asylum process. She described the experience as “traumatic.”

She recalls a conversation on a bus with an old German man who, after learning she was from Czechoslovakia, said, “You should have all been gassed.” The memory became a line of dialogue in her play. “That stayed with me,” she said. “I didn’t want to live there.” She and her partner eventually reunited and applied to relocate in the United States.

While the play is set in the 1970s and 1980s, its themes address issues that continue to rage today, both in the U.S. and in Ukraine. “Blanka is speaking about the past, but many situations have not changed,” said Ms. Sadovska. “We still struggle with the same enemy, the same empire, that is trying to imprison other countries,” she added, referring to Russia.

Ms. Sadovska is a well-known performer of traditional Ukrainian folk music, using her unique interpretation of songs she recorded and learned from women in villages in different parts of Ukraine. Of her compositions for “Adapt!” she says, “In my music there are a lot of Ukrainian motifs.” Ms. Sadovska was recently on an expedition in the Donetsk region, in the city of Mariupol. “I am full of songs which I learned from these women, so they too will be in the show.”

Ms. Sadovska has traveled many times to eastern Ukraine since the war began in 2014, giving free concerts, working with children, fundraising and collaborating with artists, including writer Serhiy Zhadan, bandurist Julian Kytasty and Ms. Sadovska’s mother, the painter and sculptor Kateryna Nemyra. She says that having direct contact with people breaks down the stereotypes she and other “westerners” in Ukraine have of the east as a Russified post-Soviet wasteland, disconnected from its Ukrainian roots. “But then you go there and discover all these people who are speaking Ukrainian and who still sing Ukrainian songs in such a beautiful way.”

These voices will echo in the music Ms. Sadovska has written for “Old Woman,” a mythic character who is a survivor from an extinct Slavic tribe whose language and culture have been forgotten. “When I hear the words ‘Our language is forgotten,’ of course I am thinking about Ukrainian because we are on the way,” said Ms. Sadovska. “And I am also thinking of other languages and cultures that are disappearing, because of politics and how we live and forget to take care.”

She believes that a theatrical work like “Adapt!” can awaken us. “It is very intense for me to create music for this character. It is lamentation, she is warning us and mourning for our future. She asks: How can we forget about our home? How can we not take care of our home, including the trees around us, the fields, nature?”

“Adapt!” considers the questions of those leaving their homeland – first of all, whether to stay or to leave. What is gained, and what is lost? How are we and our cultures compromised as we “adapt” to a new reality? What about the country and people we leave behind? And what is “freedom” – for a country, for an individual, for an artist? Can freedom conceal a different kind of prison?

Ms. Zizka began writing “Adapt!” in 2011, long before the debate on refugees and travel bans was front-page news. And while the focus is a young girl’s personal experience, immigration politics inevitably made it into the play. “I did not think that ‘Adapt!’ would be so timely, politically,” Ms. Zizka says, “but I was a refugee. Lenka is a refugee, so this play is even more personal and more relevant than when I first started writing.”

Ms. Sadovska said she hopes Ukrainian audiences will take part in this theatrical journey so close to our own history, and in the post-show discussions that are scheduled for several performances. “Especially these days we need to keep in mind that this is not only a problem of Ukraine, or Georgia, or Syria, or America. It’s really one huge global problem, and we need to have a clear position, otherwise it will kill us one by one.”

“Adapt!” opens on March 29 and runs through April 22. More information and tickets are available at www.wilmatheater.org.