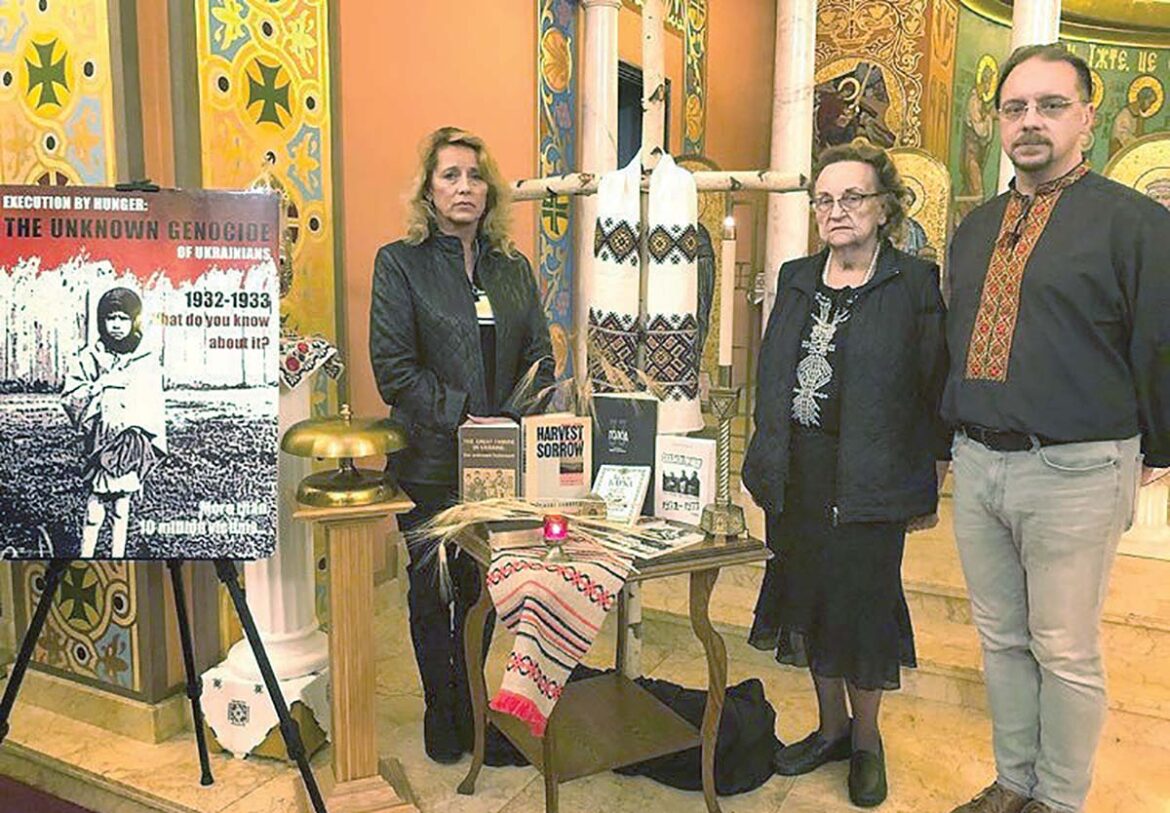 MINEAPOLIS – For the second consecutive year, the Center for Holocaust and Genocide Studies (CHGS) at the University of Minnesota partnered with the Ukrainian American Community Center (UACC) in Minneapolis to educate teachers and the public about the Holodomor. “This valued partnership provides the UACC with a platform to raise awareness and promote Holodomor recognition,” stated Luda Anastazievsky, UACC programming director, who leads the  center’s outreach and education efforts.

In August 2019, CHGS had invited the Ukrainian center to present at a summer workshop for middle and high school teachers from the Twin Cities and around the country. This week-long educator for educators provided an introduction to the legal and social concepts of genocide, as well as historical and contemporary examples of genocide, including the Holocaust and the genocides in Armenia, Bosnia, Cambodia and Ukraine.

UACC member Walter Anastazievsky talked about the legacy of Holodomor, its commemoration within the Ukrainian community and efforts at recognition – information new to most of the attending educators. The Holodomor is not taught in most U.S. schools and is not a part of the social studies curriculum. Unlike several other states, Minnesota has no law mandating genocide education. Teachers expressed appreciation for this learning opportunity and were excited to receive the Holodomor teaching resources prepared by Ms. Anastazievsky to assist them in lesson planning. 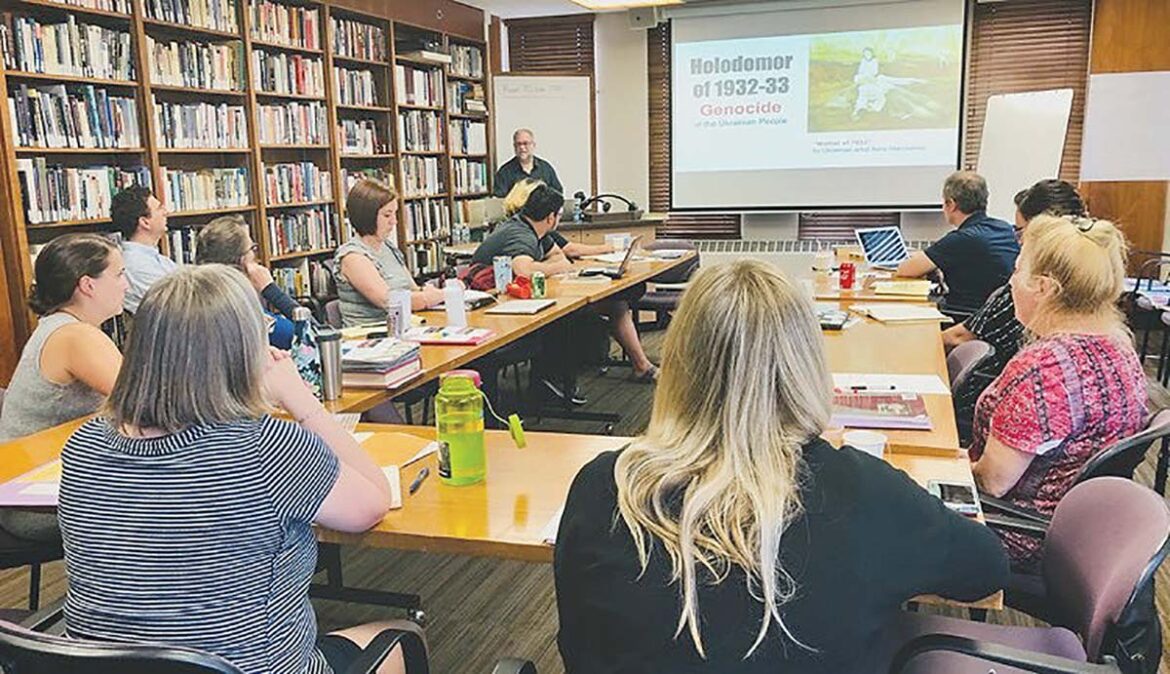 Walter Anastazievsky presents at the 2019 workshop of the Center for Holocaust and Genocide Studies.

Earlier this year, the UACC team collaborated with CHGS to create a Holodomor Resource Guide (https://cla.umn.edu/chgs/holocaust-genocide-education/resource-guides/holodomor) for the Genocide Education Outreach Program to promote the study of the Holodomor among teachers. Valentina Kuryliw, director of education, and Sophia Isajiw, research associate, from the Holodomor Research and Education Consortium (HREC) at the University of Alberta assisted the UACC team in this work. Besides being a great educational resource for teachers, students and the general public, the Holodomor Guide amplifies the Ukrainian community’s voice on a national and international level.

The Ukrainian American Community Center welcomed the opportunity to participate in an online community dialogue on the Holodomor Genocide of 1932-1933, presented on June 30. The program was part of the CHGS series “Bridges of Memory – Connecting Communities and Class­rooms,” designed to provide educators and the broader public an opportunity to learn about genocides from the experiences and perspectives of local survivors and survivor communities. Topics included the Holocaust, the Cambodian Genocide, the Armenian Genocide and the Holodomor. The series was presented virtually, and each program can be viewed on the CHGS YouTube channel at: https://www.youtube.com/user/CHGSumn/videos.

The director of the Center for Holocaust and Genocide Studies, Prof. Alejandro Baer, welcomed the attendees of the virtual event and introduced Nika Sremac, a CHGS scholar, and two guests from the local Twin Cities Ukrainian community: Ms. Anastazievsky, UACC programming director, and Stefan Iwaskewycz, grandson of a Holodomor survivor and a long-standing Ukrainian community activist. Ms. Anastazievsky and Mr. Iwaskewycz highlighted the history of the Ukrainian community in Minnesota, and provided important historical background on the Holodomor, its mass trauma, collective memory, struggle against denial and recognition. 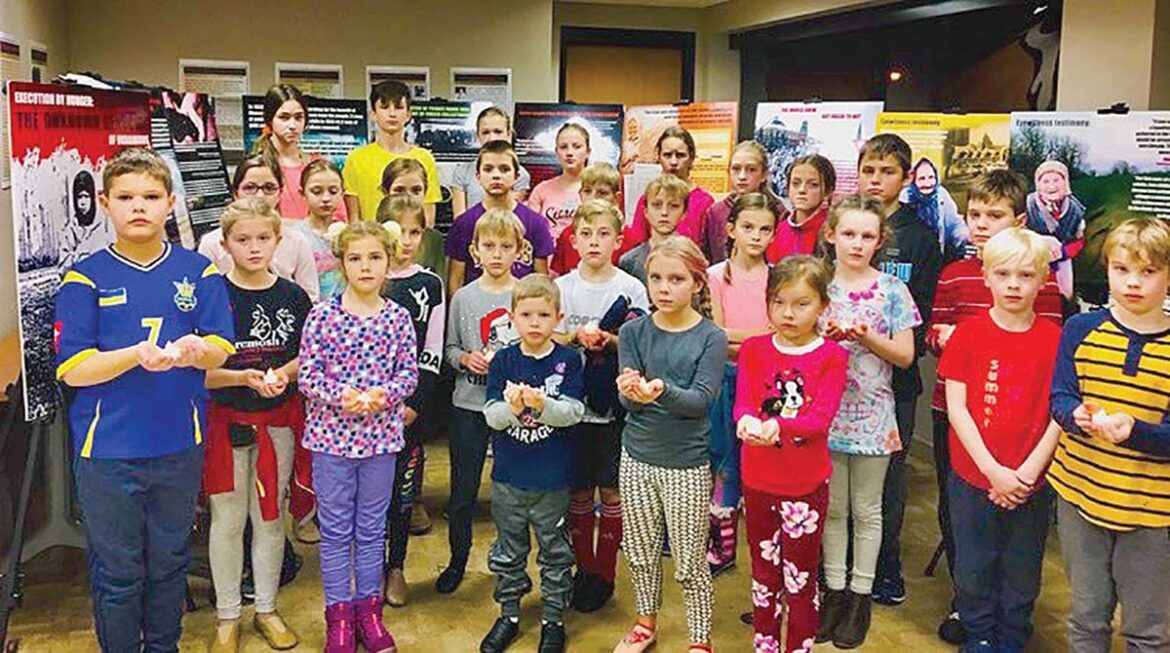 They also shared the ways Ukrainian community in Minnesota preserves and celebrates its culture, and educates younger generations. The “Bridges of Memory” event was a wonderful opportunity for the UACC to contribute to teacher and community education. Since the event was videotaped, teachers would be able to use the recorded video as a resource for teaching the Holodomor.

At the event, both presenters spoke of their personal experiences – Mr. Iwaske­wycz about growing up as the grandson of a Holodomor survivor; and Ms. Anasta­zievsky about the experience of growing up in Soviet Ukraine, under the official shroud of silence and denial about the Holodomor, and the Soviet suppression of Ukrainian language, culture, history and identity.

In his recollections, Mr. Iwaskewycz related: “My Baba [grandma] was from Poltava region, one of the hardest hit during the Holodomor, but… she didn’t like to or want to recall those memories… she was always very reticent.” As a participant of the recently completed Holodomor Oral History Project, the speaker shared his recollections in a recorded interview along with over a dozen Holodomor survivors and their descendants in the Minnesota Ukrainian community.

When asked about the importance of raising awareness of the Holodomor, Mr. Iwaskewycz brought the audience’s attention to the contribution of the late Slavko Nowytski, a trailblazing film director and well-known Minnesota Ukrainian. Nowytski created the acclaimed documentary about the Holodomor “Harvest of Despair,” which raised global awareness about Joseph Stalin’s crimes against Ukrainians. Mr. Iwaskewycz emphasized: “Young people need the opportunity to be exposed to historical events, and this documentary would do just that.”

Mr. Iwaskewycz explained that by raising awareness about the Holodomor, Ukrainians also raise awareness of the current situation in Ukraine and in the world. He pointed out that today, just as in the time of the Holodomor, Russia’s government continues its colonial policy and uses the tools of disinformation, denial and obfuscation as weapons in the hybrid war against Ukraine, which once again is forced to defend its independence and territorial integrity.

Ms. Anastazievsky spoke about a commemorative event that took place in November 2019 when the UACC worked closely with Larysa Gerasko, Ukraine’s consul general in Chicago at that time, to bring to Minnesota a Holodomor traveling exhibit developed by the National Ukrainian Museum in Chicago. During the month of November, when Ukrainians commemorate the Holodomor, the exhibit was displayed at the three local Ukrainian churches, the UACC, and at a  K-8 school.

When Ms. Anastazievsky, an educator in Minneapolis public schools, brought the Holodomor exhibit to her school, it was attended by many staff members and students. She also created a Holodomor lesson plan for her school’s social studies teacher to be taught to middle school students. It was the teachers’ and students’ first exposure to the tragedy of the Holodomor. “I’m learning about the genocide of Ukrainians along with my students, and it’s a great experience for them to see a teacher as a learner,” shared the social studies educator.

Speaking about the significance of Holodomor commemoration in the Minnesota Ukrainian community, Ms. Anastazievsky said, “By commemorating the Holodomor we are fighting the denial and stating to the world that we, Ukrainians, have distinct history and culture. It’s an act of preservation of our culture and our identity.”

At the end of community dialogue on the Holodomor Genocide of 1932-1933, Mr. Iwaskewycz brought educators’ attention to the new film about the Holodomor “Mr. Jones” by the Golden Globe-winning writer/director Agnieszka Holland and screenwriter Andrea Chalupa. Ms. Anastazievsky recommended the Holodomor lesson book titled “Holodomor in Ukraine, the Genocidal Famine 1932-1933” by Ms. Kuryliw.

“The UACC is honored to continue its partnership with the Center for the Holocaust and Genocide Studies and is already planning a Holodomor commemoration event in November. Educating teachers and the public on how the Holodomor came about, and how prejudice and the will to dominate and control a particular ethnic group led to the misuse of power, mass oppression and genocide, is part of UACC’s mission,” emphasized Ms. Anastazievsky.