The following article is the second part of a two-part series.  Part 1, which was published in the previous issue of The Ukrainian Weekly, addressed the timing, place of birth and mother tongue of Ukrainian immigrants to the United States, as well as their distribution within the U.S. Part 2 addresses Ukrainian immigrants’ characteristics, such as age and sex, education (literacy), knowledge of English, family structure, employment status, class of worker, occupation and homeownership.

The first part of this article presented new results about the First Wave of immigrants from Ukraine to the United States.  These results were based on recently released census data for 1910, 1920 and 1930.  Immigrants from Ukraine were defined using two different criteria: “place of birth” and “mother tongue.”  According to these two criteria, large fluctuations in immigrants’ totals prevent us from using these data to estimate the number of immigrants in the First Wave.  The data were useful for analyzing the immigrant’s evolution of their ethnocultural identity and their distributions by state and metropolitan area.

Using this census data, a detailed demographic and socioeconomic profile of these immigrants can be created with the following components: a) demographic: age, sex and marital status; b) integration into American society: ability to speak English, citizenship and homeownership; c) household and family structure; d) socioeconomic characteristics: literacy, labor force status, class of worker; e) and detailed analysis of occupation.

The number of immigrants defined by place of birth – Galicia or Ukraine – in 1920 was chosen as the basis for the demographic and socio-economical profile.  This definition yields the largest number of immigrants (Table 1 in part 1 of this article) and includes a representative set of mother tongues (Table 2 in part 1).  Although this definition does not include all immigrants from Ukraine, the demographic and socioeconomic characteristics are similar to those of all immigrants from Ukraine.

Immigrants have a relatively high percentage of children less than five years old (14 percent) and a very small percentage of people age 65 or older (2 percent). The high percent of children age 0-4 is due to the high fertility in the immigrant’s country of origin, especially in rural areas.  As in many immigrant groups, the highest percentage is found in the working-age group (25-44), i.e., 36 percent. There are also more men than women among these immigrants, 53 and 47 percent, respectively.

Five marital status categories are presented in the census: married, spouse present; married, spouse not present; divorced; widowed; and never married/single.  Sixty-nine percent of all immigrants are married with spouse present, followed by 18 percent single, eight percent married with spouse absent and four percent widowed.  Less than half of one percent are divorced, with twice as many men as women.  There are also twice as many single men as women and half as many widowers as widows. Men are much more prevalent in the category married with spouse absent, as it is usually the man of the house who migrates first.

The measure for level of education is rather crude in the 1920 census. It consists of questions asking whether the person can read and/or write.  Many immigrants answered that they are literate (can read and write): 79 percent males and 72 percent females.

As pointed out by researchers of this wave, immigrants strived to become integrated into American society.  A high percentage of them claim to speak English – 70 percent of males and 75 percent of females – but there is no information about their level of proficiency.  Nineteen percent of the immigrants are naturalized citizens and 14 percent started the process of naturalization.  These high percentages are the result of continuous efforts to become members of American society: a) the percent of English-speakers increases with time of residence; b) percent with citizenship is strongly related to the duration of residence in the U.S. 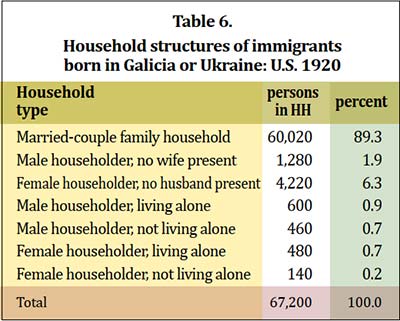 The 181,300 immigrants born in Galicia or Ukraine are members of 67,200 households, classified into seven types. Table 6 presents the absolute and relative sizes of these types.  Most of the households, 89 percent, are of the married-couple family type.  Two other important types are male householder, no wife present (two percent) and female householder, no husband present (six percent).  There are few households in the other four types; they are either one-person households or one person living with one or more non-family members.

Most of the immigrants, 90 percent, are wage earners. Only three percent are employers and seven percent are independent workers.  All employers are male and more males than females work independently – eight and five percent, respectively. 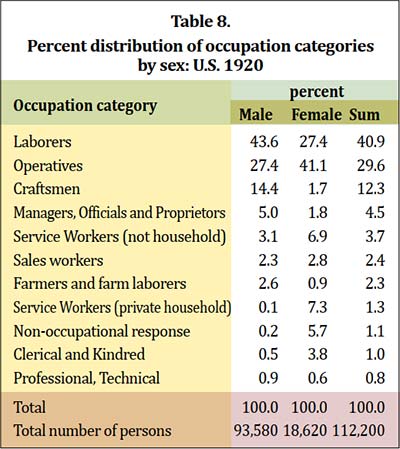 The very high percentages of immigrants in the laborer and operatives categories, as well as the very low percentage in the professional and technical categories, is consistent with a wave of immigrants characterized by high levels of illiteracy and no knowledge of the English language.  However, occupations in categories like managers or salesmen require some level of literacy and knowledge of English.  The number of immigrants with occupations in these categories is an indicator of their efforts to take advantage of the new country’s opportunities.

The two top occupation categories for males are laborers and operatives.  The laborer category lists few specific occupations.  It consists mostly of the generic term laborer, as immigrants did not provide more detail in their census responses.  The category operatives contain more specialized occupations like mine-operatives and laborers, workers in the textile industry, dyers, meat cutters, truck and taxi drivers, etc. The five percent of males with occupations in the managers and proprietors category is an indicator of success for an immigrant group that had to start at the bottom of the occupational scale. 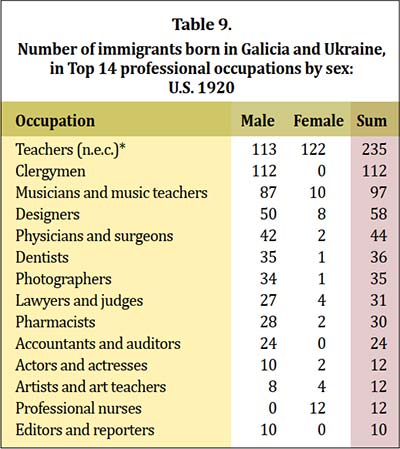 Table 10 shows the 112 clergy by mother tongue and state of residence.  Only 22 clergy have Ukrainian (or Ruthenian) mother tongue.  This does not mean that they are the only Ukrainian clergy. Some of the clergy with Russian, Polish or other mother tongues may also be Ukrainian, but from other religions like Orthodox, Roman Catholic or Protestant. Also, the definition used – immigrants born in Galicia or Ukraine – is quite restrictive. Some Ukrainian clergy may have stated other places of birth, such as Austria, Hungary, Poland or Russia. This analysis can be expanded to include cross-tabulations by year of immigration, age, marital status, family type, and the number of children (if married). 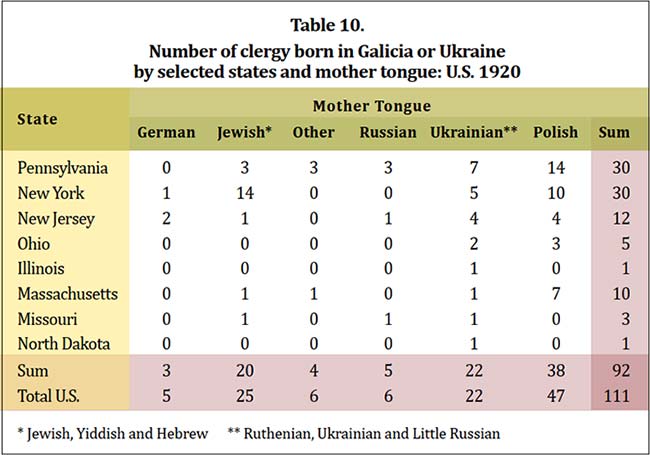 According to the 1920 census, seven of the 22 clergy with Ukrainian mother tongue resided in Pennsylvania, five in New York, four in New Jersey and two in Ohio.  Four other States have one clergy each. As mentioned, one can expand this analysis by adding more variables and get a more complete profile of these clergy. It would also be useful to compare these data with the records of the two main churches in Ukraine at that time, Greek Catholic and Orthodox, and other religions.

The availability of data from 1920 and other censuses provides a unique opportunity for increasing the level of knowledge of the first wave of immigrants from Ukraine to the U.S.  The analysis presented here provides only a small fraction of the topics that can be addressed with these data.  We invite historians, demographers and other scholars interested in this topic to contact us about getting copies of these data and technical assistance in their use.

Oleh Wolowyna is Director of the Center for Demographic and Socio-economic Research of Ukrainians in the U.S. at the Shevchenko Scientific Society, and research fellow at the Center for Slavic, Eurasian and Eastern European Studies at the University of North Carolina at Chapel Hill.  He can be reached via email at olehw@aol.com.