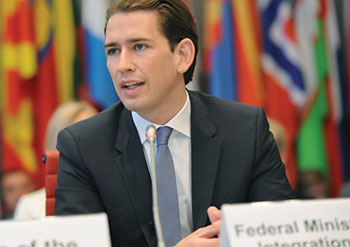 The new chairperson-in-office of the Organization for Security and Cooperation in Europe, Austrian Foreign Affairs Minister Sebastian Kurz.

KYIV – The new chairperson-in-office of the Organization for Security and Cooperation in Europe chose war-torn Ukraine for his first foreign visit as the leader of the 57-state organization.

Having announced that part of his mission would be to “defuse conflicts” during his year-long chairmanship, Austria’s Foreign Affairs Minister Sebastian Kurz visited the frontline village of Shyrokyne in Donetsk Oblast along the Azov Sea coast on January 4.

Mr. Kurz noted that the OSCE, whose 693 monitors have a mandate to monitor ceasefire efforts in the Donbas war, isn’t satisfied with the current “status quo” in eastern Ukraine.

“This visit is supposed to signify in the first place that we aren’t happy with the status quo and we want to put forth effort so that changes lead to improvement,” he said at a news conference in Mariupol, some 30 kilometers west of Shyrokyne.

Despite never taking hold since the truce was brokered in Minsk in February 2015, Mr. Kurz reiterated that the agreement is the only option for implementing peace and the measures that Ukraine and Russia agreed to fulfill.

Besides ceasing combat, both sides were to pull back military hardware and release all prisoners; Ukraine was supposed to regain control of its eastern border with Russia and carry out local elections in the Donetsk and Luhansk regions.

However, the OSCE’s mandate to monitor the implementation of the truce measures has been compromised from the start. Its monitors from 44 participating states, of whom 39 are from Russia as of December 21, haven’t been given unfettered access in the war zone, including the border areas where Russia continues to transport soldiers, weapons and other supplies.

“Together we have to make Russia implement [the] Minsk [peace agreement],” Ukraine Foreign Affairs Minister Pavlo Klimkin tweeted after the joint news conference with Mr. Kurz. “First of all – security issues, give the OSCE access to the Ukraine-Russian border and release hostages.”

Ukraine had 217 servicemen killed in combat last year, according to official data. In all, some 10,000 people have died in the Donbas War, the United Nations reports, adding that about 1.7 million people have been displaced.

The OSCE chief’s visit was preceded by that of three U.S. senators to the same frontline area on New Year’s Eve.

“We urge our colleagues to take more meaningful and severe sanctions against Russia for its hacker attacks on the United States,” Sen. McCain said, adding that there is “clear evidence” of Russian intervention in the American presidential election.

“I send the message from the American people – we are with you, your fight is our fight, and we will win together,” he underscored.

Sen. Mc Cain also stated: “In 2017, we will defeat the invaders and send them back where they came from. To Vladimir Putin – you will never defeat the Ukrainian people and deprive them of their independence and freedom.”

President Poroshenko stated that Ukraine is fighting for more than its independence amid Russia’s unprovoked war. “We are fighting for freedom, for values, for democracy, protecting them in the center of Europe in the 21st century,” he said.

Upon the senators’ return to Washington, where a new session of Congress convened on January 3, a group of bipartisan lawmakers said they would prepare a bill for next week that would offer sanctions against Russia, CNN reported.

Sen. Ben Cardin “wasn’t clear on whether the bill would force the president-elect’s hand on sanctions, or whether it would enshrine the sanctions that the White House announced last week, which [Donald] Trump could otherwise roll back if he wanted to once in office,” according to the CNN report.

“It will complement and go beyond that,” Sen. Cardin said of the White House actions, cited by CNN. “It complements, but there’s separation of powers.”

In addition to constant Russian military action, relentless information warfare and an economic embargo of Ukrainian goods, the Kremlin has launched cyberattacks on Ukrainian infrastructure and government websites.

About 6,500 Russian cyberattacks were conducted in the last two months of 2016, Mr. Poroshenko said on December 29 during a national security and defense meeting. Five government agencies and 31 government information resources were targeted.

For example, on December 6, the networks of the State Treasury Service and the Finance Ministry went offline, affecting 150,000 electronic financial transactions. A similar attack affected the website of the state railway company, Ukrzaliznytsia.

The late 2015 power outage in Ivano-Frankivsk Oblast, according to experts, was believed to be the first known power outage caused by a cyberattack. “The U.S. cyber firm iSight Partners identified the perpetrator as a Russian hacking group known as ‘Sandworm,’ ” Reuters reported.

Over the weekend of December 17-18, Kyiv’s power grid was also hit. The northern part of the capital saw power unexpectedly switched off, amounting to 200 megawatts of capacity, “equivalent to about a fifth of the capital’s energy consumption,” Reuters reported.

A report by the American cyber security firm CrowdStrike blamed Russia for tracking Ukrainian artillery movements in eastern Ukraine with a malware implant on Android devices, The Guardian reported. It was conducted by the same hacking group allegedly employed by the Russia’s military intelligence agency that hacked the Democratic Party during the recent presidential election.

Ukrainian military units were tracked for two years, according to the cyber security firm’s report.

“CrowdStrike said open-source research suggested that during the two years of conflict, Ukrainian artillery forces lost 50 percent of all weaponry but over 80 percent of their D-30 howitzers. The higher-than-average loss suggests data gained from the hack was then used to target the artillery,” The Guardian reported.