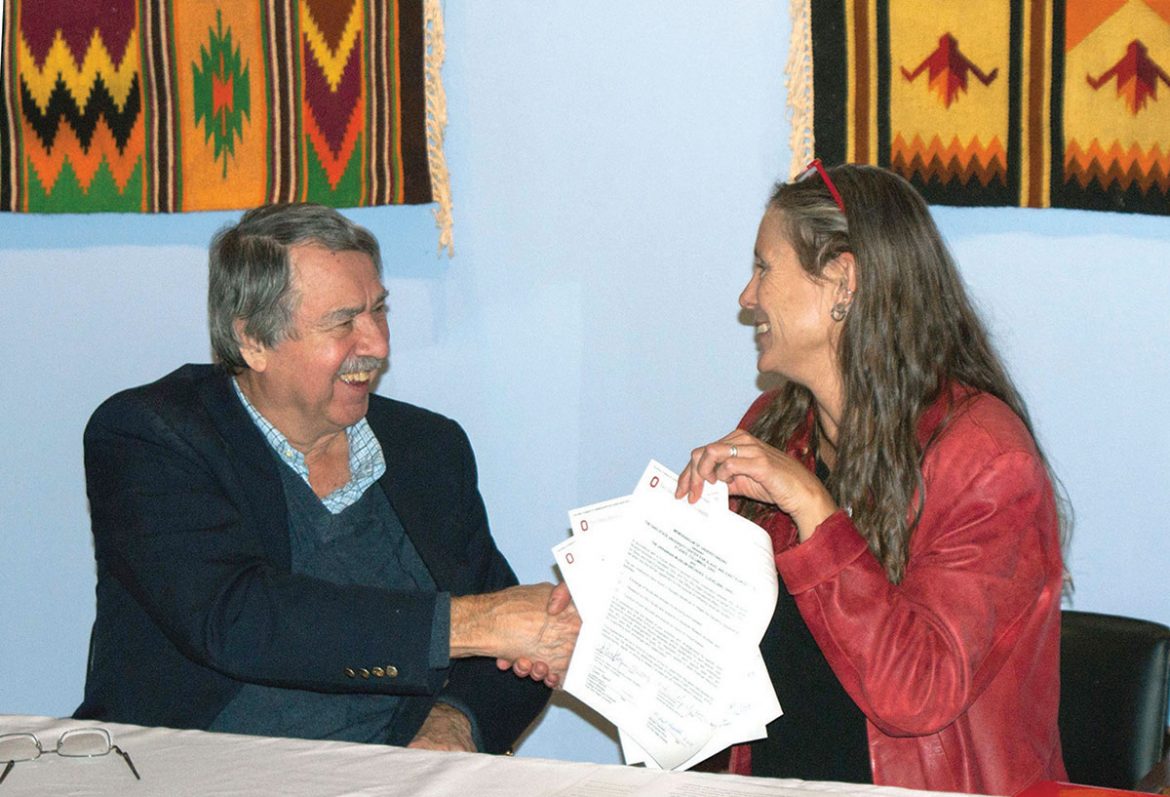 Dr. Angela Brintlinger, director of Ohio State University’s Slavic Center, shakes hands with Andrew Fedynsky, director of the Ukrainian Museum-Archives in Cleveland, after the signing of a memorandum of understanding between the two institutions.

CLEVELAND – The Ohio State University Center for Slavic and East European Studies (CSEES) and Department of Slavic and East European Languages and Cultures (DSEELC) are academic and research leaders in a field that increasingly figures in American and global economic, geopolitical and cultural interests. The Ukrainian Museum-Archives (UMA) in Cleveland is a leading repository of Ukrainian historical and cultural materials. On November 15, CSEES and the UMA signed a memorandum of understanding (MOU) to formalize an already existing 20-year partnership.

The ceremony took place at the UMA with Dr. Angela Brintlinger, director of CSEES and professor of Slavic and East European languages and cultures at Ohio State and UMA Director Andrew Fedynsky signing on behalf of their respective institutions.

Mr. Fedynsky briefly related the history of cooperation between the two institutions going back to the late 1990s, beginning with a course he and Prof. George Kalbouss co-taught in DSEELC on Ukrainian history and culture, typically attracting 50 or more students. This course was offered in spring quarter 1999 and winter quarter 2000). Ukrainian language courses were last offered at Ohio State in 1998.

The CSEES has sponsored numerous lectures devoted to Ukraine over the years and DSEELC hosted Ukrainian Fulbright Fellow Oleksandr Debych (2017-2018) as a visiting scholar. Mr. Debych did substantial research on the UMA’s film, photo and poster collections. Mr. Fedynsky noted that, over the past decade, the UMA has provided paid summer internships to more than a dozen Ohio State University undergraduates, with support from the Nicholas Suprenenko Memorial Scholarship Fund.

Dr. Brintlinger recounted the history of Slavic and East European studies at Ohio State, mentioning programs focused on Poland, Serbia, Slovenia and Russia. Ukraine, she said, has been part of that mix not only at the CSEES but also at other colleges and departments, such as the Ohio State College of Food, Agricultural and Environmental Sciences, which sponsors professors from Ukrainian agricultural universities for a semester funded by a U.S. Department of Agriculture grant. As part of that program, the Ukrainian Museum-Archives welcomes the Ukrainians and their Ohio State counterparts for a tour of Cleveland, introducing them to the Ukrainian community and offering a round-table discussion with Rep. Marcy Kaptur (D-Ohio) and a reception at the UMA facility.

Dr. Brintlinger noted that the university overall aspires to increase its international engagement. In cooperation with the UMA, the CSEES is looking to increase its partnerships with Ukraine. The signing of the MOU, she said, formalizes an ongoing relationship between the institutions. Dr. Brint­linger’s long-term goal is to establish an endowed professorship at Ohio State University in Ukrainian studies to perpetuate scholarship in this vital area for decades to come and on into the next century.

Sean Martin, director of the Jewish Archives at the Western Reserve Historical Society in Cleveland, was at the ceremony as well and related how OSU-UM’s Fulbright Fellow, Mr. Debych, guided him through the cultural and tourist treasures of Kyiv this past summer.