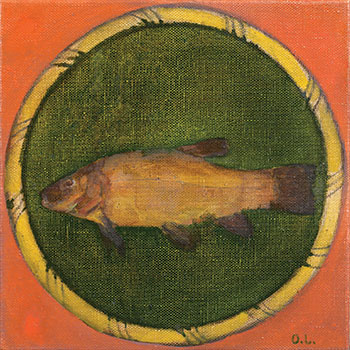 NEW YORK – Art at the Institute, the visual arts programming division of the Ukrainian Institute of America, presented its first exhibition of the spring season on March 23 through April 22. The opening reception introduced evocative landscape paintings, titled “Silence,” by Kyiv-based contemporary artist Oleksiy Lytvynenko. Curated by Walter Hoydysh, Ph.D., director of Art at the Institute, the exhibition marked the artist’s first solo showing in the United States.

Ever drawn to the fluidity of the natural world and its capacity for self-renewal, Mr. Lytvynenko finds systems and design in nature which he translates into art. His paintings combine organic elements within a framework that is deeply atmospheric and mysterious, and where abstraction and realism are neither separate nor incompatible. He moves ably from states of confinement to states of constant change, from replication to improvisation and visual uncertainty.

The exhibition’s multi-panel paintings take on a quietly spiritual aura in their contemplative examination of earth’s changes and riches, an airy glimpse of the landscape with an expansive spatial depth. Some are triptychs with three sections horizontally juxtaposed, others are polyptychs, including four or five panels. Viewers are initially drawn in by their sheer scale and beauty, and the seeming ease of execution, and then challenged by the compositional relationships of their objects and ground, or the unexpected complexity of emotional response. 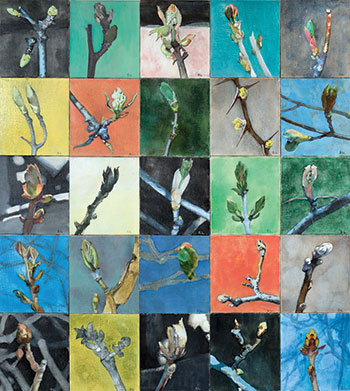 Exploring recurring motifs inhabiting his landscape — water, plants, insects, fish and amphibians — the artist sees the human, beginning with himself, as an integral part of nature. The affinity between man and nature is what impresses Mr. Lytvynenko most, rather than their contrast. He plainly understands his duty as an artist to suggest the essence, the eternal qualities of the aesthetic subject, which is in itself a work of natural art even before he arrives. These paintings adequately exalt anthropocentric personality.

Mr. Lytvynenko reclaims the natural beauty of northern Ukraine through the ecstatic magic of its water and terra firma — the quintessence of his landscape painting. Nature, here, is composed and decomposed by the rhythm of the mist, under a milky twilit light, in which forms emanate from the invisible anticipating the presence of an indefinite elsewhere. The paintings do not point to a far shore, do not offer security or comfort, nor do they promise to reveal the next image or point.

These pictures do not refer to a specific place, but rather to an emotional one. This is a visually allusive painter. By showing a flourishing bud, a vaporous field, a mythical pond, or nomadic creature, Mr. Lytvynenko brings the viewer into this expressive world very much the way poetry does. Were the paintings about named places and familiar turf they would be easier to interpret. In such a case, one would say that the artist exhibits an attitude, or has an opinion about a supposed condition. Or, perhaps, he merely wants to make a record of natural material.

It is by no accident that the artist arrives at nature for his interpretive material. Both Mr. Lytvynenko’s uncle and grandfather were artists. Both grandmothers were biologists, his mother – a biologist, and his father – an ichthyologist. Another uncle was a geologist. The future of the artist’s understanding of natural science expanded throughout childhood poring over his parent’s library. A constant procession of illustrations of animals and birds surrounded him in his grandfather’s studio. Further inspired by his uncle’s artistic output, the itinerant painter turned to an exuberant kind of abstraction, where he remains. 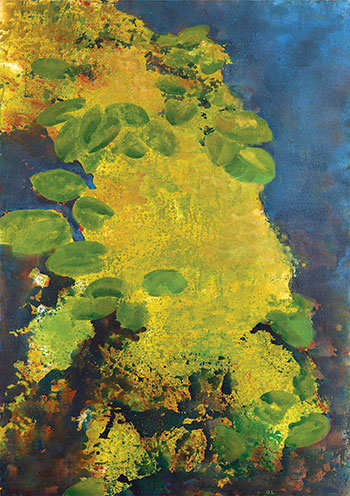 With abandon, Mr. Lytvynenko loves art and cherishes natural phenomena. That passion and enthusiasm spread throughout conversations with him during the exhibition’s opening reception. His interpretation of what he sees as a painter is that of nature as miracle, a prayerful intercession before it and the greatness of its mysteries. Silence in Mr. Lytvynenko’s paintings is among the central themes and characters of his world; silence as not merely the absence of sound. In pure consciousness, he suggests, associations link silence with prayer as a tacit conversation with God and parallel the notion of initial chaos on the eve of the natural world’s creation.

This search for spiritual transcendence continually influences Mr. Lytvynenko’s creative vision, durably expressing humans’ relationships with one another, with the natural world and with the infinite. Having undergone a process of creation, destruction and finally preservation, the stillness of meditation is echoed in the quietude of the finished paintings. Plants and creatures that transform are arranged to symbolize the enduring pattern of regeneration. The results are both peculiar and sublime.

There are countless details to absorb; the way the connections are made from one canvas to another, the way that elements overlap in perfect, random harmony. There is an appreciation for the artist’s ability to orchestrate the happy accidents of fate and the careful management of the density of color and composition. While appropriating spatial concepts from both Western and Far Eastern repertoire, Mr. Lytvynenko successfully manages to avoid cliché. He practices an economy of means, directness, simplicity and spontaneity to evoke an immediate and personal experience of the scene appearing before him.

There is concurrent complexity and simplicity in these paintings. An ordered series of panels each depicting a singular blossom (“Buds,” 2015) is the result of the artist’s meditative attention to the cyclical process occurring in nature. Observing how spring rebirths plants, Mr. Lytvynenko focuses on the cosmology of minor events and things, erasing the boundaries between the micro and the macro worlds. His flowers and buds mark the subtle progression of the seasons. Despite their recognizability, the painterly results are anything but ordinary. The blossoms also contribute abstract compositional value, providing rhythm and an organic dynamism as they bend this way and that, and they provide a unifying feature as they sometimes become one with the background.

In devoting himself to botanical motifs, Mr. Lytvynenko allies himself with one of the most constant universal and symbolic themes in art. Every culture and religion incorporate the symbol of the garden and plant — a place apart where heaven and earth are most closely aligned. A boundless metaphor for the creation of order for the power of design to bring chaos under control, the botanical provides a record of cultural uniqueness, a place for personal expression and cultivation.

“Water Lilies” (2012) concentrates on the water’s unreachable surface, its reflections and transparencies. With a vague nod to Monet, the artist’s deft brushstrokes, quick elliptical outlines and multi-layered surfaces manage to suggest both the subtlety and the visual excitement of his experience. The variety of weightless effects is amazing, from the most subdued and blended modulations to brash and brilliant colors. In this painting, there is no place to stand; it turns nature upside down. The viewer is positioned just above the water, and like rain or snow, falls into it and dissolves.

Deliberate references to more academic styles of painting are adapted to a subject matter that is also relatively traditional: the interior still life on a table (“Fish – Tench,” 2017). In a cycle of seven smallish square paintings, Mr. Lytvynenko’s density of color, carefully modeled forms with combination of flora and fauna on compositionally centered dinner plates, sharp contrasts between light and shadow, and consummate finish in his realization also echo the supremely accomplished painterly practices of European still life. An analogous attention to execution informs these works paradoxically implementing a more abstracted vision. These still lifes prioritize one creature or plant in isolation. They also imply a fragmented world view as a holistic one seemingly witnessed through a lunette.

So, what in fact is the content of Mr. Lytvyneko’s painting? Acts of perception of the here and now; contemplation; epiphany; love of nature; nature as sublime; images as symbols of life and death, melancholia and emotional instability; provocations to metaphysical questioning about what can and cannot be known; instability evocative of poetic ambiguity; the expressiveness of flowing paint itself.

There is the need to spend a great deal of time and attention with these paintings, not simply to glance at their surfaces having limited activity. One enters a seamless experience of measured space and the experience of visual order itself. Mr. Lytvynenko’s bodies of work represent series of ideas explored with undeniable passion and persistent experimentation that pushes the limits of creative self. It is inspiring to know that each viewing of his pictures will reveal something yet unseen.

This is a look at an aspect of contemporary art with a different emphasis stemming from an assured inner life independent of the current “tentative” fashion of contemporary art. It is an examination of art’s more tranquil aspects, the search for the poetic, the metaphoric, the mysterious and an acknowledgement of the return to a more romantic, if not, sentimental vision. Mr. Lytvynenko shows that paint can be more than paint on canvas, that it can lead the onlooker to a glimpse, a moment, a hint of something spiritual and euphoric. There are no words for this. He operates in a place where words often fail.

Oleksiy Lytvynenko’s work has been exhibited extensively in Ukraine, Austria, Canada, France, Germany, Sweden, Switzerland, the United Arab Emirates and the United States. He is the recipient of numerous awards for his painting from settings including the Salon International D’Art Contemporain (Nice, France) and the Soros Center for Contemporary Art (Kyiv). He studied at the Kyiv State Art Institute and is a member of the Ukrainian Artists Union. Mr. Lytvynenko lives and works in Kyiv.