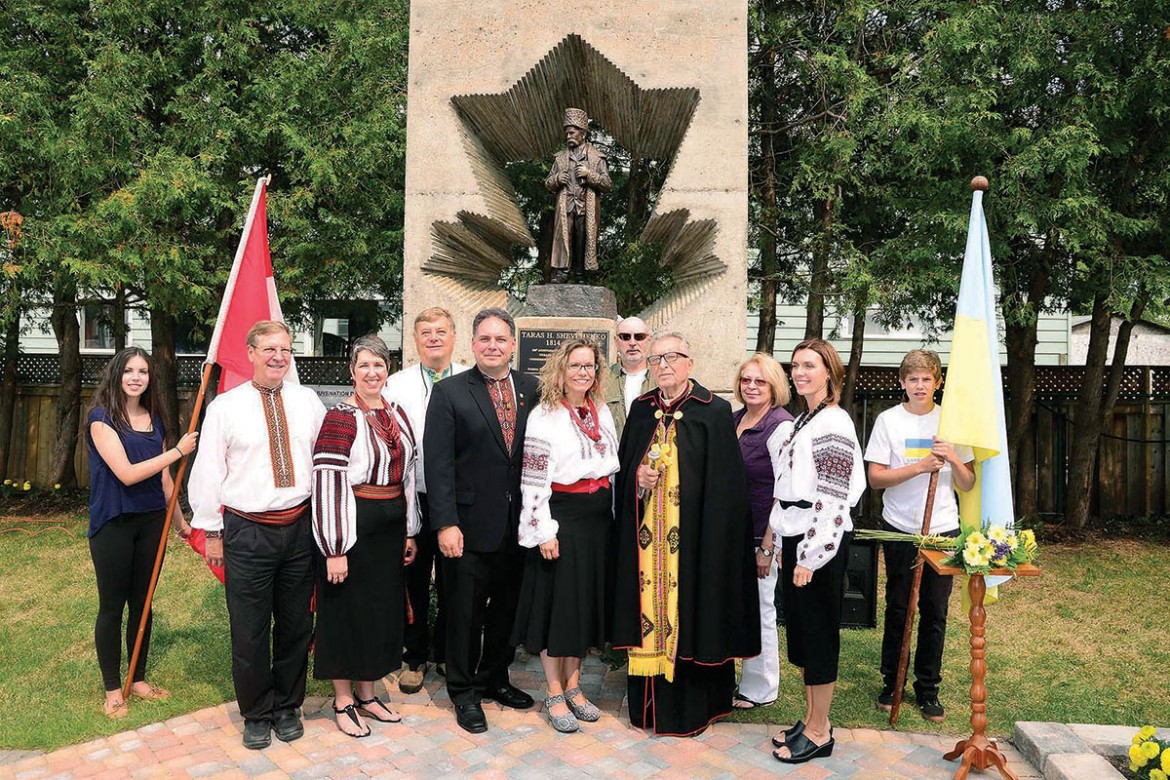 TIMMINS, Ontario – The Ontario town of Timmins this year recognized its Ukrainian pioneers, as well as the bard of Ukraine with the rededication of Kobzar Park and the unveiling of a new statue to Taras Shevchenko.

Kobzar Park was officially established in 1981 and dedicated in 1984 to recognize the contributions of pioneer settlers to Canada and the Timmins-Porcupine Gold Camp.

The Kobzar Park Rejuvenation Committee was founded in December 2013; many members of that committee also serve with the Ukrainian Cultural Group of Timmins (formerly the Ukrainian Women’s Organization of Timmins).

The group provided $1,500 in seed funding to commemorate the 200th anniversary of Shevchenko’s birth. The committee’s main goal was to replace a marble statue of Shevchenko, sculpted by Petro Movchun (1925-2010) of Kyiv that was installed in the park in 1984. That original statue was vandalized beyond repair in the early 2000s, after being toppled over and landing head-first into the ground.

Fund-raising efforts began after permission was received from the City of Timmins, which owns and maintains Kobzar Park. Grants applications were made and positive responses came from the Taras Shevchenko Foundation of Canada, Temerty Family Foundation, Ukrainian Credit Union, Sudbury Ukrainian Seniors Center and local companies.

Combined with many individual and family donations, the committee was able to commission a sculptor to create a four-foot bronze statue depicting a wise Shevchenko in traditional clothing. The inspiration was Shevchenko’s self-portrait from 1860, and the sculptor did follow-up research in order to replicate the traditional footwear and clothing of the times. 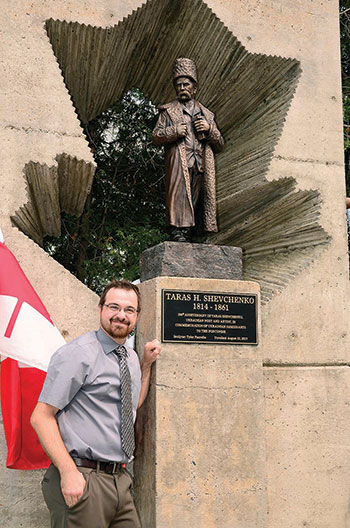 Sculptor Tyler Fauvelle of Lively, Ontario, poses with his statue of Taras Shevchenko in Timmins, Ontario.

The sculptor chosen was Tyler Fauvelle, who is based a short distance away in the town of Lively in Greater Sudbury, who has come to appreciate the First Nations and immigrant contributions to Canada and northern Ontario, having depicted them in many of his works. A local contractor, Northern Industrial Service Group (NISG), stepped up and completed all the landscaping. A grant from the TD Friends of the Environment Foundation and support from the Timmins Horticultural Society helped with flowers, shrubs and planters.

Over 75 from northeastern Ontario and northwestern Quebec came for the Shevchenko tribute held on Saturday, August 22, the same weekend that celebrated Ukraine’s 24th anniversary of independence.

A ribbon cutting was held to rededicate the park, and a new replacement Kobzar figurine with shimmering red boots and bandura uniquely constructed in stained glass by area artist Tanya Thurston of Thurston Stained Glass was unveiled on the metal entranceway to the park.

Gary Scripnick, former City of Timmins councilor, whose pioneer parents date back to 1919, presided as master of ceremonies. He read words of congratulations from Andrew Gregorovich, president of the Taras Shevchenko Museum in Toronto, who noted that Timmins joins Winnipeg, Ottawa and Quebec City as one of four Canadian cities boasting Shevchenko monuments.

Participating in the special program were Timmins Mayor Steve Black; Noella Rinaldo, executive director of the Downtown Timmins Business Improvement Association; and Karen Bachmann, director of the Timmins Museum. Andre Grzela, a representative of Member of the Provincial Parliament Gilles Bisson, presented a special recognition plaque from Ontario Premier Kathleen Wynne that noted, in part: “Let this be a reminder of the dedicated Ukrainian Pioneers of Timmins and the Porcupine Camp.”

A vintage portrait of Shevchenko was presented from the estate of Mary Catarello Barilko. Committee member Catherine Klopoushak recited a translated version of Shevchenko’s “Zapovit” (Testament).

The chair of the Kobzar Park Rejuvenation Committee, David Yaschyshyn, recounted the project’s progress and hurdles, and thanked all who contributed to the committee’s success in achieving its goals.

The Shevchenko statue was then unveiled by Messrs. Fauvelle and Yaschyshyn. The new brass plaque beneath it reads “200th anniversary of Taras Shevchenko, Ukrainian poet and artist, in commemoration of Ukrainian immigrants to the Porcupine” (the reference is to a neighborhood of Timmins).

Msgr. Lev Chayka of Holy Protection of the Mother of God Ukrainian Catholic Church in Val D’Or blessed the statue and park.