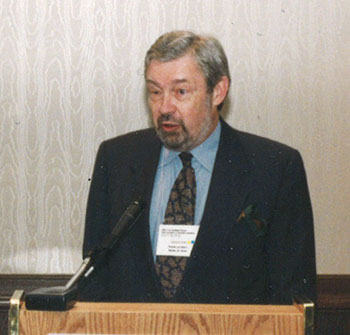 He taught in the Department of English at University College from 1961 to 1986, during which time he was a post-doctoral fellow at the Humanities Center of the Johns Hopkins University in 1968-1969. He created a Canadian Literature Program for Atkinson College at York University.

After completing his LLB (with honors) at Osgoode Hall Law School, he received his call to the bar of the Law Society of Upper Canada in March of 1975. In his law pursuits, he served as senior counsel to the Public Guardian and Trustee of the Province of Ontario. He was a speaker at many academic conferences and published both academic and legal papers.

Mr. Rudzik spent a sabbatical year in 1993-1994 in Kyiv, as director of law training provided for young Ukrainian professors by way of exchange with Canada, the United States and Europe, under the auspices of the Ukrainian Legal Foundation. He monitored that program for two years.

Mr. Rudzik was engaged in three of the quasi-war criminal cases as launched by Canada’s Department of Justice against naturalized Ukrainian post-war citizens, against whom allegations of fraud and consequent sanctions of deportation were threatened.

“Mr. Rudzik was a dedicated leader, organizer and volunteer within the Ukrainian Canadian community,” remarked UCC President Paul Grod. “He committed himself to building pride in our community, defending the history of our people and standing up for human rights in Canada and Ukraine.  Mr. Rudzik left a positive mark on our community and Canada for which we are grateful.”

Mr. Rudzik continued his law practice, restricted mainly to estates and estates litigation. In addition, he returned to his academic origins by pursuing research into a variety of areas of intellectual history, including that of the assassination of Symon Petliura and the judicial proceedings consequent upon his murder.

He ended a 50-year association with the University of Toronto when he became a member of the university’s senior faculty and a member of its Executive Committee and was given the title of senator.

The funeral for Mr. Rudzik was private; it was followed by a memorial celebration of his life at the Ward Funeral Home in Oakville, Ontario, on December 18. In lieu of flowers, contributions may be made to either the Canadian Diabetes Association or the senior faculty at the University of Toronto.