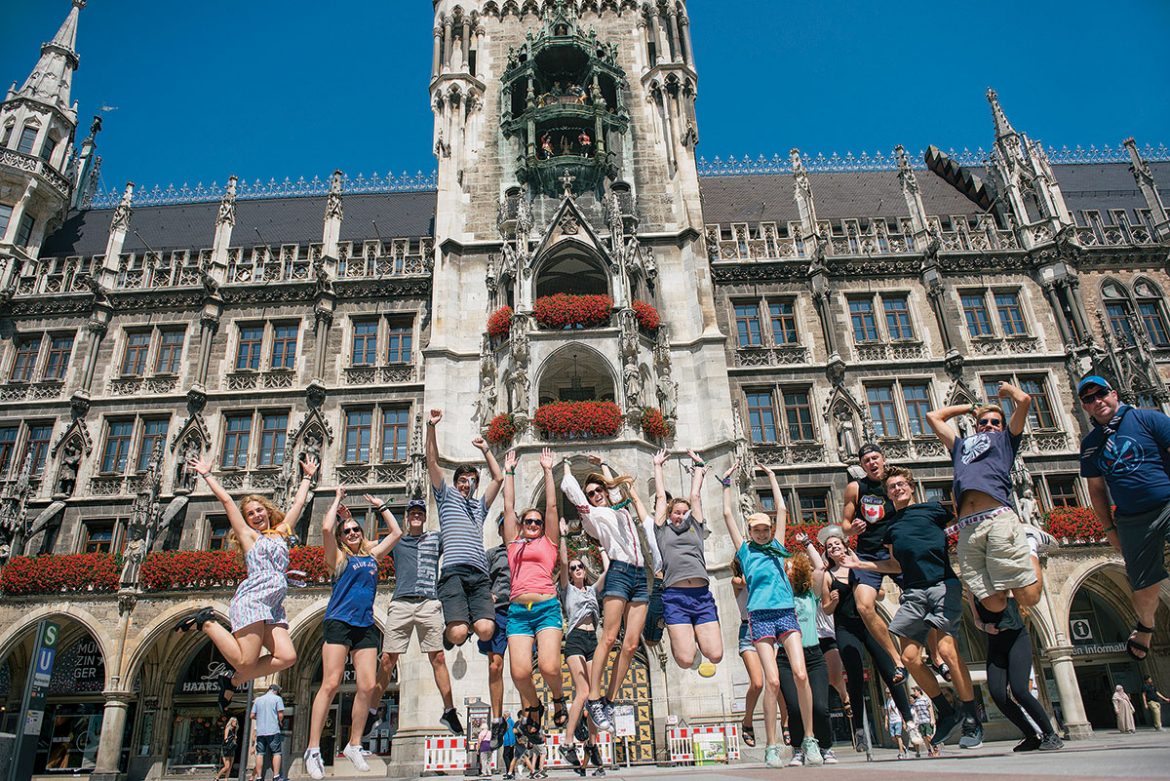 Plast scouts in front of the Rathaus (town hall) in Munich.

KÖNIGSDORF, Germany – Over 700 Plast Ukrainian scouts came together in Germany this summer for the international jubilee jamboree held every five years. This year it celebrated the 105th anniversary of Plast Ukrainian Scouting Organization and the 70th anniversary of the first populous post-war Plast gathering at the “Sviato Vesny” (spring camporee) in Mittenwald in 1947.

The event took place on August 12-19 at Jugensiedlung Hochland, near the village of Königsdorf, about 50 kilometers from Munich. Plast scouts gather every five years to celebrate their jubilees and to reunite with friends from across the globe – each time in a different location. This year’s jamboree (known by its Ukrainian acronym as YuMPZ) saw participants from 60 different cities in 13 different countries: Australia, Austria, Belgium, Canada, Great Britain, France, Germany, Poland, Slovakia, South Africa, Sweden, Ukraine and the United States. 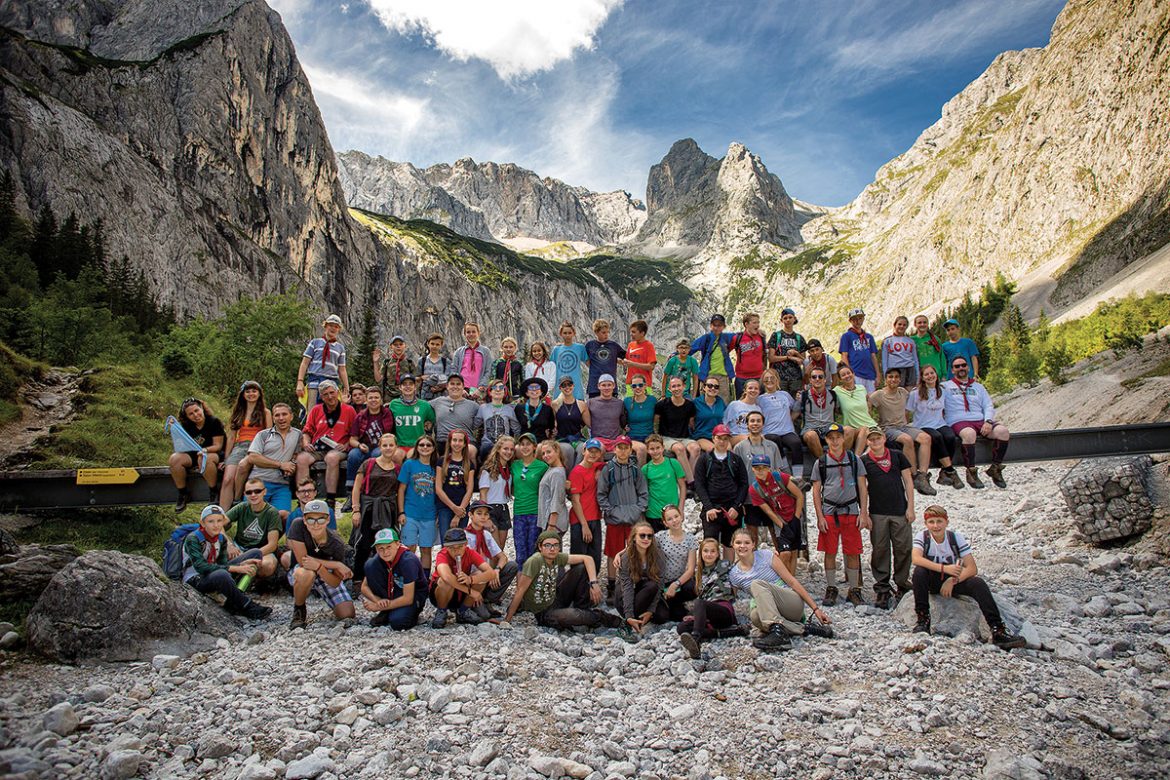 A group of Plast scouts on a hike, with Germany’s highest peak, Zugspitze (2,962 meters) in the background.

Seventy years after Plast members gathered in Mittenwald in the summer of 1947 to celebrate their organization’s 35th anniversary, this year’s YuMPZ, named “Amid the Forest” (a direct translation of the German word “Mittenwald”), was kicked off on August 12 with a grand opening and a celebratory march. Among those present were Plast members who had attended the first Sviato Vesny 70 years prior, as well as representatives from the Ukrainian Greek-Catholic and the Ukrainian Autocephalous Orthodox Church, including Bishops Borys Gudziak and Petro Kryk, and a representative of the Consulate General of Ukraine in Munich, Dmytro Shevchenko, and members of German scouting organizations. The esteemed guests delivered warm greetings and well-wishes for Plast and its members.

The weeklong jamboree was filled with exciting activities for young participants: 14 kilometers of whitewater rafting on the Inn River in Austria’s Imster Schlucht canyon; a hike through the beautiful Höllentalklamm gorge to the base of Zugspitze, Germany’s highest peak; a city tour of Munich; as well as various scouting games around the Königsdorf campsite. Adult scouts also had an opportunity to participate on a weeklong cycling expedition from Berchtesgaden to Mittenwald. 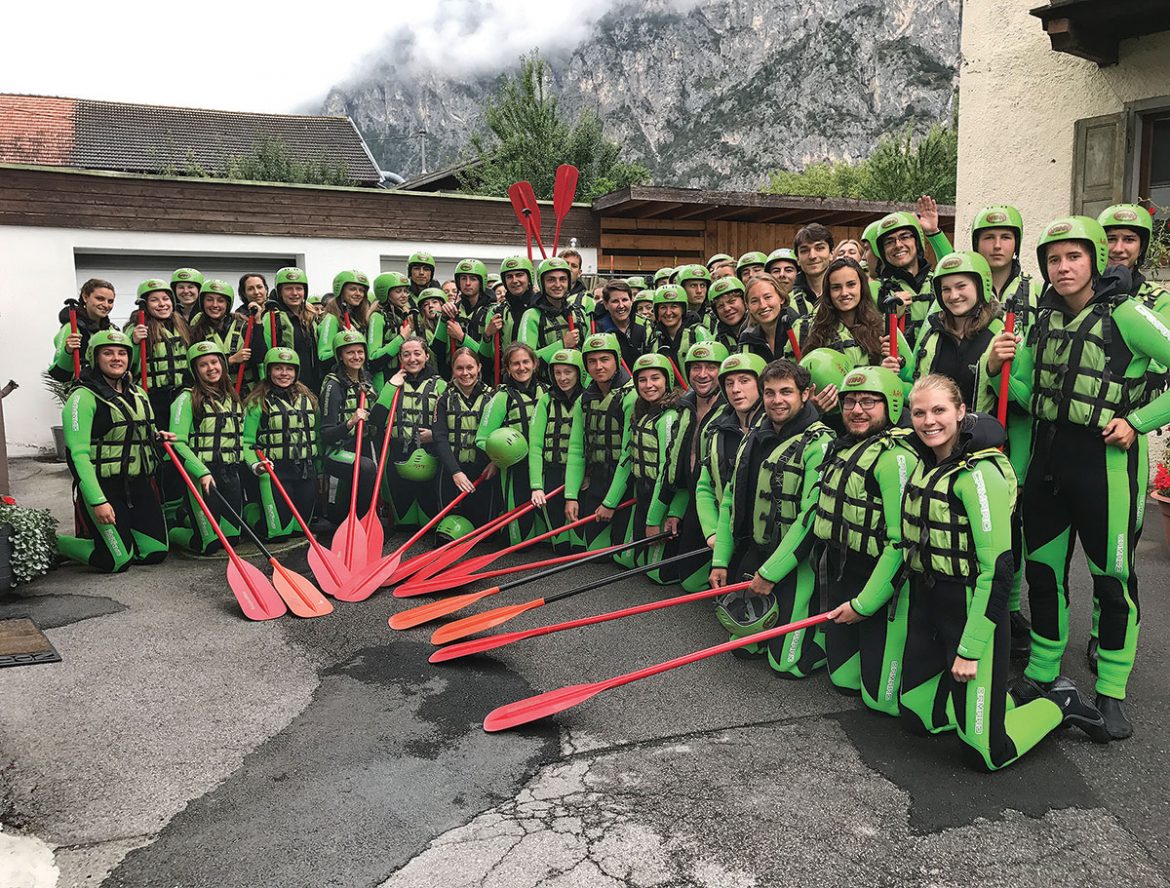 A group of Plast scouts after their whitewater rafting excursion.

Other highlights of the week included an international ecological exhibit named “Green Planet” that was prepared by scouts from each country; a mini-museum titled “Mittenwald 1947,” which exhibited photographs and memoirs from the 1947 Sviato Vesny and the displaced persons camps where the participants of that time resided; a talent show “Plast in Concert”; the sixth session of the Plast Congress, a convention that offers directives for Plast’s future; as well as a concert by the popular Ukrainian band Kozak System.

A Plast Post Office was open for the duration of the jamboree. Participants could send postcards and letters worldwide with official German Plast Jamboree postage stamps and postmarks. 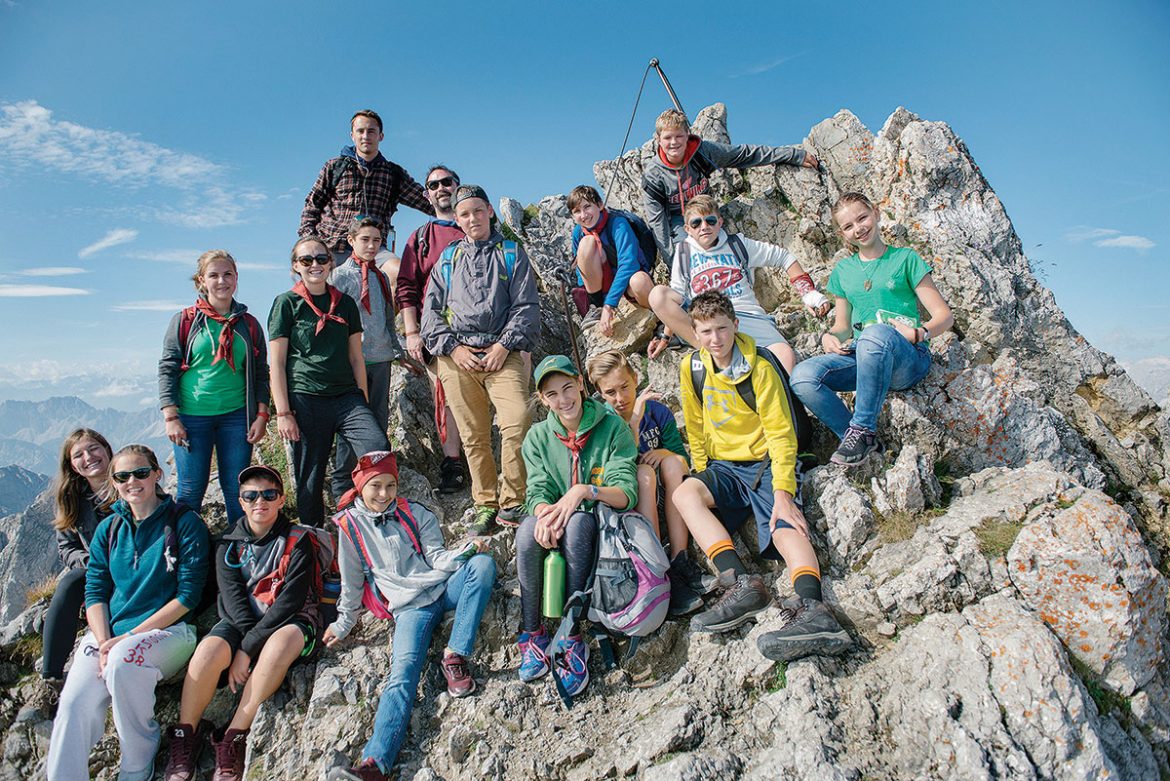 Participants of Plast Ukrainian Scouting Organization’s international jamboree atop Westliche Karewendelspitze (2,385 meters), a mountain that towers over the town of Mittenwald.

Especially moving was the final day when more than 500 Plast scouts traveled to the town of Mittenwald to visit the actual location of the famous 1947 Sviato Vesny, to get a bird’s eye view of the city from the peak of Karwendel Mountain, and to learn about the town then and now. After a morning filled with informative activities, everyone gathered at Kurpark Puit, where Mayor Adolf Hornsteiner of Mittenwald greeted the Plast scouts and wished them good luck as they continue to strive to make the world a better place.

In Kurpark Puit Plast scouts also unveiled a memorial dedicated to the displaced persons who lived there after World War II. The youngest members of the jamboree (cub scouts, or “novatsvto”) together with the six participants in attendance who had taken part in the 1947 camporee, planted a commemorative ginkgo biloba tree at the park. This particular tree species, one of the oldest on the planet, was selected as a symbol of peace, environmental protection, friendship and strength to honor those scouts who carried on Plast’s tenets and continued to live by them wherever they went on to settle. 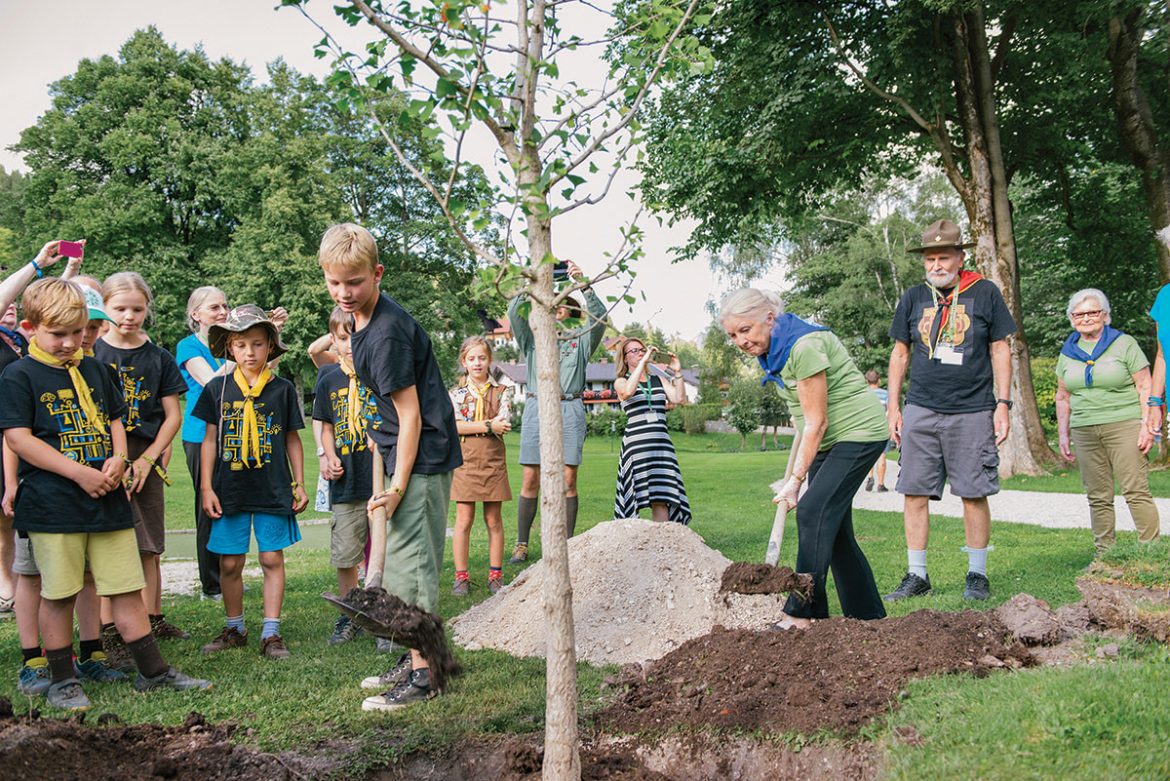 Plast cub scouts and participants of the historic “Sviato Vesny” of 1947 plant a commemorative ginkgo biloba tree in Kurpark Puit.

Borys Frankewycz of Munich, head organizer of the 2017 YuMPZ, stated, “I am grateful that, after 35 and 70 years, Germany can once again host Plast members from all over the world. It was important for us to return to Mittenwald, as it has a meaningful place in our history. We were most fortunate with the weather, thank God, because it can be very transient in the Bavarian Alps.”

“I think all of the participants were happy. It’s hard not to be captivated by the breathtaking mountains,” he added. 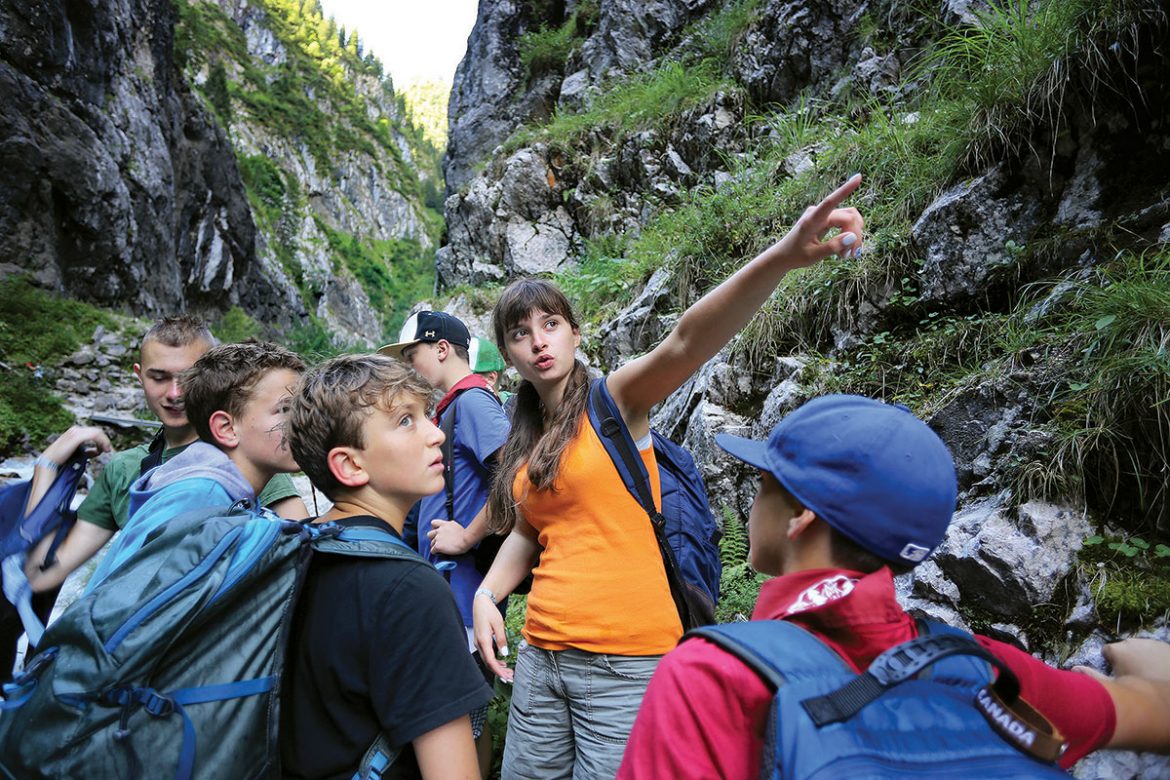 Nastia Zafiyovska from Lviv leads a group of Plast scouts on a hike.