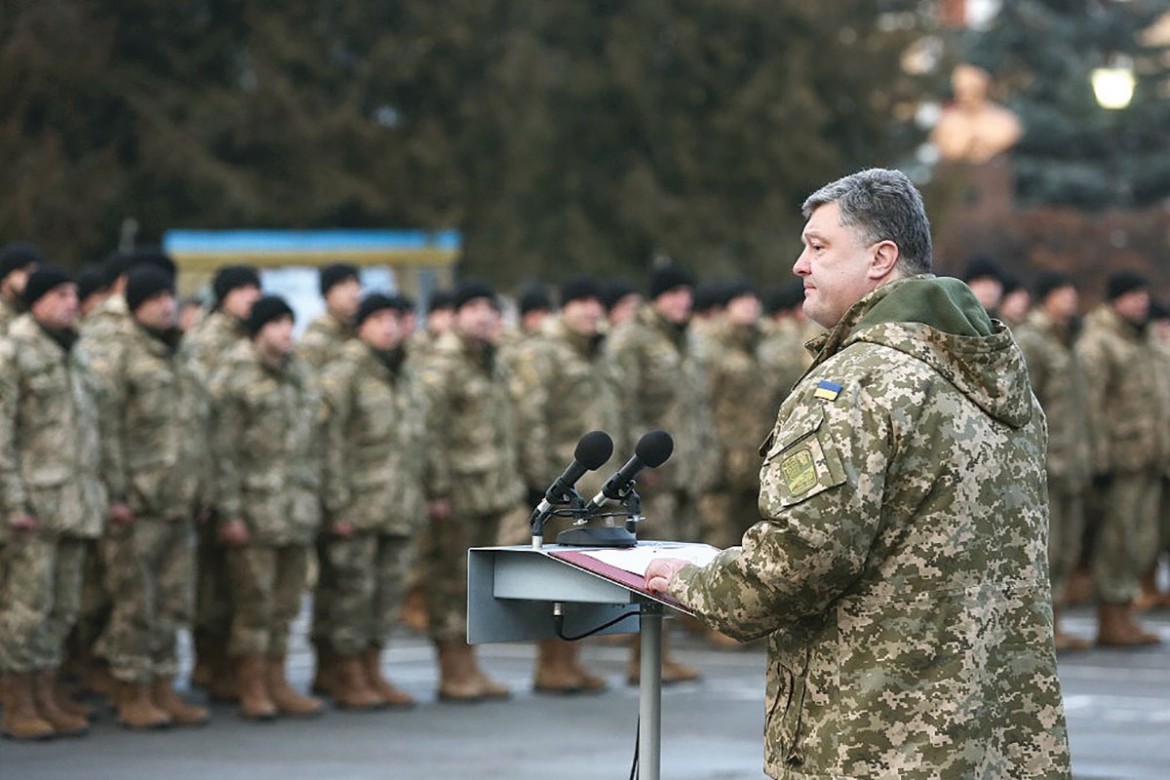 President Petro Poroshenko on January 11 with soldiers of an artillery brigade during a working visit to Ternopil. Seventy percent of Ukrainians polled disapprove of his government’s handling of the war in the Donbas.

KYIV – About 25 percent of Ukrainians approve of the job President Petro Poroshenko is doing, while about 70 percent disapprove of his performance, particularly his administration’s handling of the war in the Donbas. As president, he’s the commander-in-chief of the military and has led the negotiations with foreign leaders to resolve the conflict.

“He has quite strong support, particularly when compared with [Prime Minister Arseniy] Yatsenyuk,” said Petro Oleshchuk, a political science lecturer at Taras Shevchenko National University in Kyiv. “The public is banking on Poroshenko to resolve this war and his rating reflects certain hopes and expectations. I would even say that they’re a down payment.”

The poll, released on January 12, was conducted by Rating Group Ukraine between November 19 and 30, 2015, in cooperation with the International Republican Institute’s Center for Insights in Survey Research and was financed by Global Affairs Canada.

As low as 25 percent may be, the president’s support exceeds that of other state bodies, such as the Cabinet of Ministers and Parliament.

Only 12 percent of Ukrainians approve of the Cabinet’s work led by Mr. Yatsenyuk, compared to 82 percent who disapprove. The ratings of the Cabinet, which is responsible for domestic affairs, largely reflect the deteriorating economic conditions in Ukraine, which is undergoing an economic depression in which GDP is expected by the World Bank to have plunged 12 percent this year.

“The Cabinet’s reforms aren’t very apparent to the public, but their impoverishment is very apparent, particularly in the form of inflation,” Mr. Oleshchuk said.

Only 11 percent of Ukrainians approve of the Verkhovna Rada’s work, compared to 83 percent who disapprove, which is nothing new, said Mykhailo Basarab, a Kyiv political consultant. “Parliament has always been the most unpopular body, ever since the days of [President Leonid] Kuchma,” he said.

The poll revealed that pro-Western parties either somewhat or entirely hostile to Mr. Poroshenko’s policies would gain seats in Parliament if elections were held in the nearest future.

The Poroshenko Bloc would finish first with 15 percent. The Batkivshchyna and Samopomich parties, which are part of the current coalition but have opposed the president on key issues such as special status for the Donbas, would gain 21 percent together.

“Growing attitudes in opposition to the government are radicalizing into various ideological niches. The next Parliament would have far more conflicts than the current one,” said Mr. Basarab, pointing out that this session has already had its fair share of fistfights and blockades of the podium.

The Russian-oriented Opposition Bloc, a potential ally to the Poroshenko Bloc because it also supports the establishment of the Donbas special status, would finish in second at 12 percent. The People’s Front, led by Mr. Yatsenyuk, would not qualify for Parliament.

Mr. Poroshenko is only the fourth most popular politician in Ukraine, with 27 percent of poll respondents viewing him favorably. The most popular Ukrainian politician at the moment is Andriy Sadovyi, the head of the Lviv City Council (or mayor), who has 41 percent support.

“Society is looking for new politicians and new faces, even if it knows little about them. There’s a complete vacuum of leadership,” Mr. Oleshchuk said.

The second-most popular politician is Odesa Oblast State Administration Chair Mikheil Saakashvili, who had 35 percent of respondents viewing him favorably.

Since his appointment in May, he has led a vocal anti-corruption campaign in which he’s engaged in heated exchanges with top officials, including the highly unpopular prime minister, who has a 12 percent favorability rating. He now is among the leaders of the civic movement “For Cleaning Up Ukraine.”

Another politician who gained notoriety for his no-nonsense approach and willingness to confront corrupt officials face-to-face is Hennadiy Moskal. The third-most popular politician, he served as head of the Luhansk military-civil administration in the Ukrainian-controlled territory for four months before being transferred to Zakarpattia in July.

“Saakashvili and Moskal represent the radicalizing protest attitudes in society,” Mr. Basarab said. “Moskal express himself harshly and curses when communicating with the press. His rudeness attracts a certain segment of Ukrainians who are looking for drastic politicians because they’re dissatisfied with the status quo.”

“With his armed aggression, Putin did what the Ukrainian patriots couldn’t do for two decades. Ukraine’s post-Soviet ruling class even worked towards discrediting NATO. After the armed aggression, Ukrainians understand just who is the reliable ally,” Mr. Basarab commented.

The poll was conducted by the Center for Insights in Survey Research and involved 1,800 respondents. The poll has a margin of error of 2.3 percent. An additional 1,284 respondents were questioned in the Ukrainian-controlled territory of the Donetsk and Luhansk regions.

An overwhelming 75 percent of respondents in the Ukrainian-controlled Donbas revealed that they favor the occupied territories remaining part of Ukraine.

Of those, 32 percent want to remain as part of a unitary Ukraine as before the war, 35 percent want more authority for their region under decentralization, while 8 percent want full autonomy within Ukraine, as is being proposed with the special status favored by Russia and Europe.

The most popular political figure in Ukrainian-controlled Donetsk and Luhansk is the local industrial magnate Rinat Akhmetov, with a 35 percent favorability rating.

Yurii Boiko, the allegedly corrupt natural gas trader who leads the Opposition Bloc, enjoys a 24 percent favorability rating, while Mr. Moskal is the third most popular with 17 percent after his fourth-month stint at the helm of the Luhansk Oblast.

The president enjoys only a 10 percent favorability rating among the residents of Ukrainian-controlled Donetsk and Luhansk, while the prime minister has 4 percent favorability. President Petro Poroshenko on January 11 met with soldiers of an artillery brigade during a working visit to Ternopil. Seventy percent of Ukrainians polled disapprove of his government’s handling of the war in the Donbas.