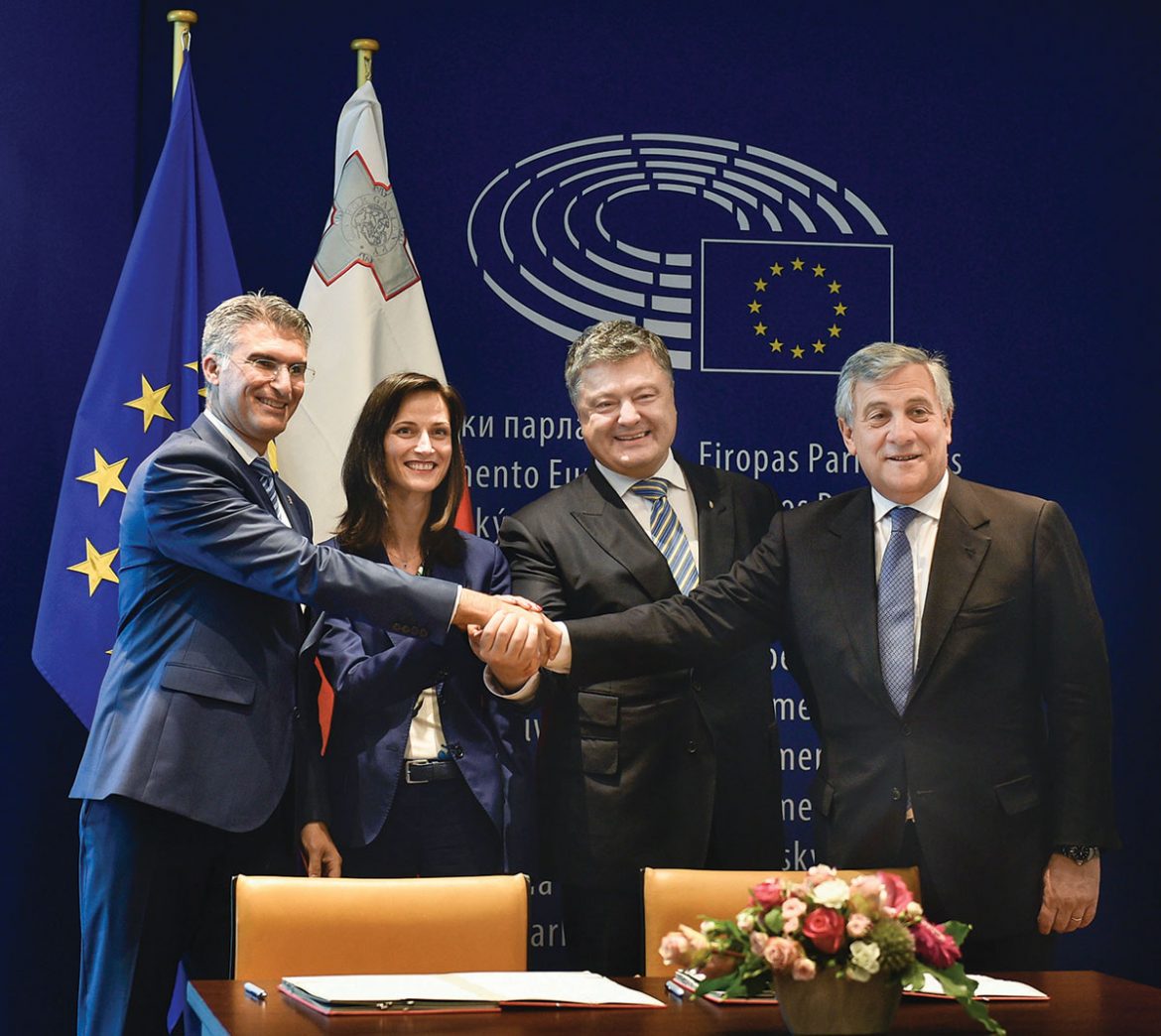 At the signing ceremony for a new visa-liberalization regime with the European Union in Strasbourg on May 17 (from left) are: Malta’s Interior Minister Carmelo Abela (whose country currently holds the rotating presidency of the EU), Member of the European Parliament Mariya Gabriel, Ukraine’s President Petro Poroshenko and European Parliament President Antonio Tajani. In his May 14 press conference, Mr. Poroshenko cited Ukraine’s closer ties with the European Union as a major achievement.

KYIV – President Petro Poroshenko touted Ukraine’s deepening integration with the European Union and fielded questions about law and order, corruption, progress on reforms and his businesses on May 14 during his first news conference in 16 months.

Speaking of the EU’s decision to waive visa requirements on May 11, the president said: “Only crazy people can consider Ukraine to be part of the so-called ‘Russian world.’ Ukraine is part of a united Europe stretching from Lisbon to Kharkiv. For three years Russia has tried everything to block Ukraine’s path towards the EU. But nothing will stop our path to Europe.”

He said that on May 17 he will visit Strasbourg, where the Council of Europe is located, to attend a signing ceremony of the visa-free travel legislation on the back of a working visit to Malta on May 16. Mr. Poroshenko, 51, will also start a series of meetings with the leaders of the Group of Seven industrialized nations, starting with German Chancellor Angela Merkel in Berlin on May 20.

Citing other positive aspects of his administration, Mr. Poroshenko named signing a political pact and free-trade agreement with the 28-nation EU, the ongoing prosecution of fugitive ex-President Viktor Yanukovych for treason and other crimes, and the successful hosting of this year’s Eurovision song contest.

“Much has been accomplished. Am I happy? No,” he told reporters. “There were some human errors made, [and] delays in reforms.”

The president also said he isn’t happy with the investigation into the high-profile death of journalist Pavel Sheremet who was killed in a car bomb explosion on July 20, 2016.

“Regretfully, I was expecting a better outcome. I’m not satisfied that we haven’t found the killers and that they haven’t been brought to justice,” he noted.

Mr. Poroshenko told journalists that Ihor Ustymenko, a former Security Service of Ukraine (SBU) officer who was at the crime scene several times before the bomb detonated, according to an investigation by Slidstvo.info, would be questioned the next day.

On May 15, the National Police confirmed that Mr. Ustymenko had been questioned.

Asked whether he’ll run for a second term, Mr. Poroshenko said it’s too soon to answer that question.

“There are two years left of my term,” he said. “There’s much left to be done… in September during my report to the Verkhovna Rada, I’ll present my vision for the development of the country for this and the next few years.”

Part of the vision includes NATO accession and holding a national referendum to join the collective military alliance.

Following Foreign Affairs Minister Pavlo Klimkin’s meeting with U.S. President Donald Trump in Washington on May 11, the Ukrainian head of state said that soon “the Americans will designate a point man for coordinating relations with Ukraine.”

Of the several phone conversations he has with Mr. Trump, Mr. Poroshenko said: “They were splendid. I [also] spoke with Vice President [Mike] Pence. I had a very detailed talk with Secretary of State Rex Tillerson. We effectively work with Congress.”

When asked to address allegations that the SBU has been following and staging protests outside the residences of civic activists who criticize him, Mr. Poroshenko said there is “unprecedented freedom in Ukraine.”

He praised the SBU for preventing terrorist attacks by Russia and their collaborators in Ukraine. Mr. Poroshenko also complimented the SBU for doing its part in countering “Russian hybrid warfare.”

When asked to address how his bank, International Invest Bank, had income rise three-fold in the first quarter of this year, the president told a journalist: “I’m not a businessman, I learned this from you.”

He explained that his bank had received additional reserves from the central bank and this was counted as additional income.

The multi-millionaire added that his bank is run by an asset management company and that it wasn’t put in a blind trust like his other assets because he would have to change its domicile registration from Ukraine to a foreign country.

On May 16, Mr. Poroshenko signed a presidential order that imposed additional sanctions on Russia for illegally annexing the Ukrainian territory of Crimea and for waging war in easternmost Luhansk and Donetsk oblasts.

“Russia used cyber warfare trying to influence the results of elections across Europe, and in the U.S. We expect that they will try to do the same thing in Ukraine,” he said. “I am confident that our determination and unity will not leave them any chance [for this].”

The sanctions add to restrictive measures that affect 1,228 individuals and 468 entities, according to the presidential website. They preclude Russian banks and television channels from broadcasting in-country. Individuals, including foreigners, who have visited occupied Crimea illegally are also on the list.