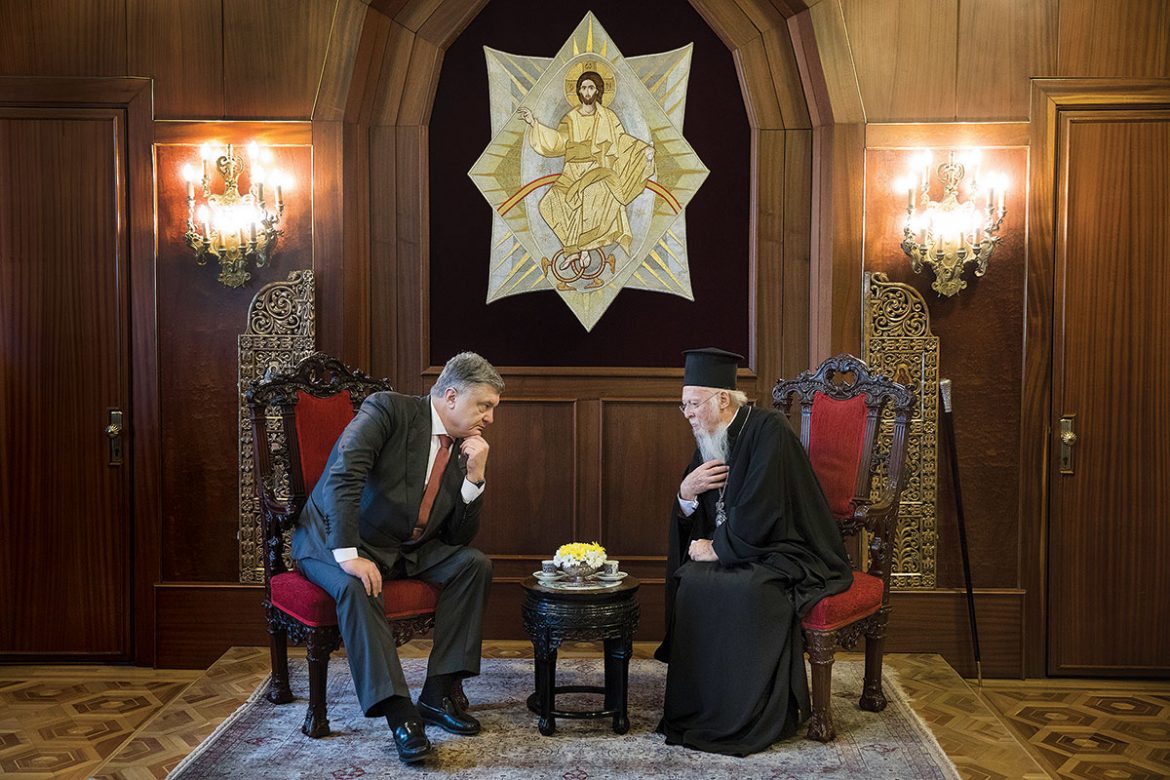 KYIV – When President Petro Poroshenko called the leaders of parliamentary factions to his office on April 17 after their morning plenary session, political pundits began to speculate.

It was, instead, a religious affair. One that the president equated with further solidifying the nation’s sovereignty and independence from Russia.

Mr. Poroshenko called for the creation of a single unified Ukrainian Orthodox Church, much like his predecessors, Presidents Viktor Yushchenko and Leonid Kuchma, had done while in office. Canonically, Ukraine’s Orthodox believers have lacked autocephaly, or self-governing authority, since 1686 when the Kyivan Metropolitan was transferred to the Moscow Patriarchate.

The Kremlin doesn’t have the right to interfere in the religious affairs of Ukraine, the president told the Verkhovna Rada on April 19, ahead of the national legislature’s vote to send Patriarch Bartholomew of Constantinople a note approving the president’s appeal for establishing autocephaly.

A solid majority of 268 lawmakers supported the move. Thirty-three of the 34 deputies who voted against the formation of a unified Orthodox Church in Ukraine were from the Russia-friendly Opposition Bloc faction headed by ex-Energy Minister Yuriy Boiko who served under former President Viktor Yanukovych.

Consistently, Opposition Bloc lawmakers, including former Russian citizen Vadim Novinsky, have refrained from naming Russia an aggressor state in the Donbas war and have blamed the president of Ukraine for stoking it.

Speaking ahead of the parliamentary vote, faction leader Mr. Boiko emphasized that the “state shouldn’t interfere with religious issues,” explaining why the bloc won’t support the president’s initiative. “All this should be resolved by leaders of religious confessions and believers, and politicians have the right to participate in this process only as ordinary parishioners.”

Only the Ukrainian Orthodox Church – Moscow Patriarchate (UOC-MP) didn’t support the initiative, saying it would do so only on “canonical grounds,” referring to the fact that the UOC-KP isn’t recognized by the 14 Orthodox Churches of the Ecumenical Patriarchate. Moscow considers the UOC-KP a renegade Church.

“I think all this will fizzle out in a huge way, just like it had many times before. There will be a lot of noise in the media, and then it will be all over,” said the UOC-MP’s deputy chief of communications, Archpriest Mykola Danylevych, on his Facebook page.

He furthermore stated that the president’s initiative is beyond his purview as head of state and dismissed the action as a pre-campaign political stunt ahead of next year’s presidential and parliamentary elections.

“It sounds the same as if we wrote: ‘[UOC-MP] Metropolitan Onufriy [Orest Berezovsky] gathered the Holy Synod of the UOC. The topic of discussion will be NATO accession,” the Moscow-affiliated Church spokesperson said.

“This is the spiritual basis of any state. Without this spiritual basis, the state cannot exist,” Patriarch Filaret said, adding that Kyiv has striven for Church autocephaly for the 26 years since independence. “Just as a state cannot exist without an army, it cannot without a Church. This will be a huge push toward uniting all of Ukrainian society – to recognize a Ukrainian Church.”

UOC-KP spokesperson Archbishop Yevstratiy (Ivan Zoria) rejected the UOC-MP’s arguments that autocephaly can’t be given without the approval of the Russian Orthodox Church, to which the UOC-MP – which calls itself simply the “Ukrainian Orthodox Church,” with purposeful ambiguity – is subordinate.

Thus, “the practice of granting Tomos on autocephaly by Constantinople in the 19th-20th centuries confirms that the Ecumenical Patriarchate alone makes this decision, without the need for prior agreement with other Churches (it can take into consideration their thoughts, but is not bound by their positions),” Archbishop Yevstratiy wrote.

Indeed, unilateral decisions were made by the ecumenical patriarch – who is “the first among equals” of the 14 Orthodox Churches’ leaders – to give autocephaly to Orthodox Churches of Estonia in 1996, Bulgaria in 1998 and the Czech Republic and Slovakia in 2014.

Mr. Poroshenko said he would place a phone call to Ecumenical Patriarch Bartholomew to inform him of the Verkhovna Rada’s vote on April 19. The two had met for seven hours, according to the presidential administration, during Mr. Poroshenko’s visit to Turkey on April 9.

The Ecumenical Patriarchate in the Turkish capital of Ankara declined to comment when The Ukrainian Weekly made a telephone inquiry. “We will respond when there is information to give,” said press office director Nicholas Papachristou.

Mr. Kuchma made Church unification a priority of national policy in 1998, and “Yushchenko paid more attention to this matter when he was president when a similar appeal was sent to the Constantinople Patriarchate in 2008,” said Mr. Sagan said, who in 2007-2010 headed the government agency that registers religious organizations.

“There is a 15th Orthodox Church in America, which isn’t recognized by Constantinople – Moscow gave it Tomos,” the religious scholar noted.

Sixty-eight percent of Ukrainians who say they believe in God identify with the Orthodox Christian faith, according to a Razumkov Center nationwide poll conducted in March 2017 that didn’t include respondents in Russia-occupied Crimea or the Donbas.

The Russian Orthodox Church was the only officially sanctioned spiritual body in the Soviet Union. Sixty-three percent of its 8,296 parishes in 1940 were located in Ukraine, and only 11 percent in Russia, according to a November 4, 2000, article by Anna Dickinson in Religion, State and Society, a journal published in the United Kingdom.

The repressive KGB of the USSR had heavily infiltrated the Church, according to numerous scholarly works. By 1992, during Ukraine’s first full year as an independent country, the UOC-KP was formed with Metropolitan Filaret (the current patriarch) at the helm, signaling Kyiv’s break from Moscow.