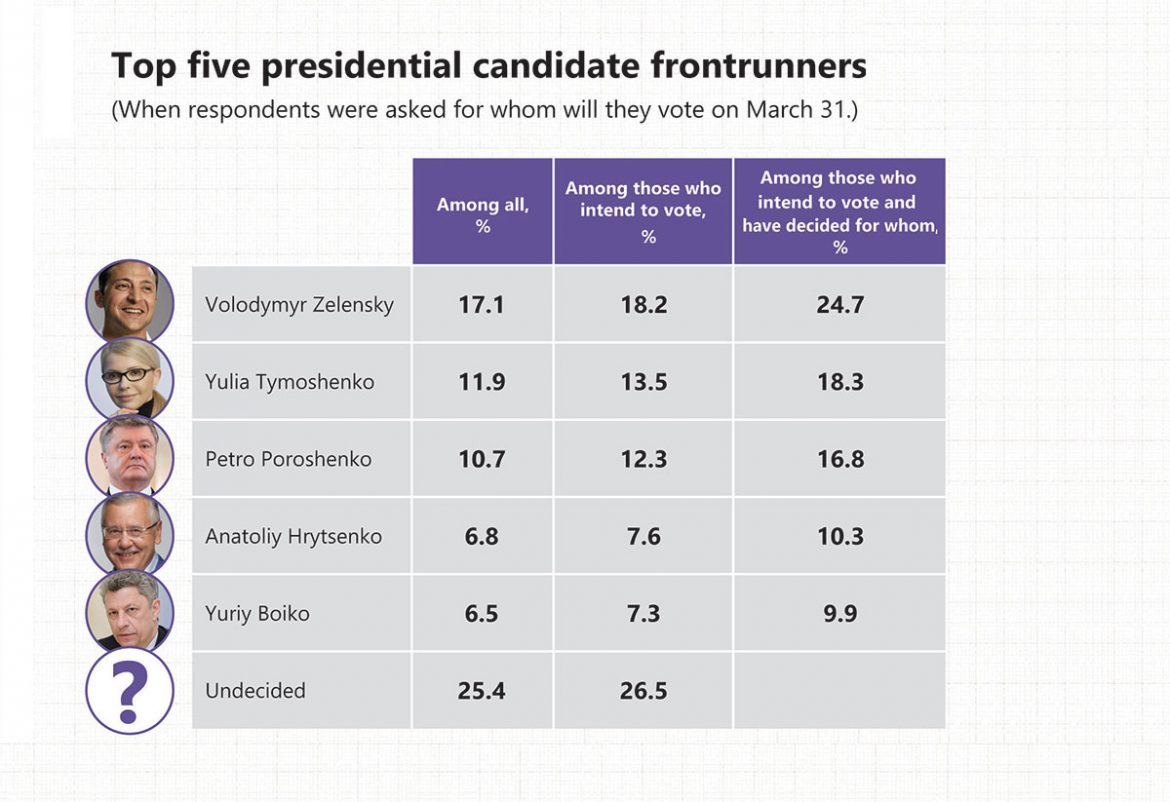 The Ukrainian Weekly graphic based on Rating Sociological Group nationwide survey of Ukrainians age 18 and over conducted on March 1-7, 2019 (sample error doesn’t exceed +/- 1.5 %).

KYIV – Politically untested comedian and actor Volodymyr Zelensky continues to lead a pool of 39 presidential candidates in an unpredictable first round of Ukraine’s presidential election, according to two nationwide surveys released this week.

Polling at 25-28 percent among decided voters, the 41-year-old showman is the only candidate showing ratings above the teens and is the frontrunner likely to make it into the scheduled April 21 runoff if no candidate gets a majority of votes.

Next behind him and closely tied are current President Petro Poroshenko and Yulia Tymoshenko, a former prime minister and current parliamentary faction head, as reported in surveys by the Rating Sociological Group and Socis center for sociological and marketing research.

Ukraine’s first wartime president is riding on the achievements of his incumbency that is tied to nation-state building and resistance to Russia while further integrating with the West. 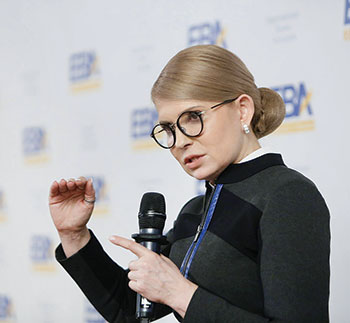 Presidential candidate Yulia Tymoshenko, a former prime minister and current member of Parliament, speaks at an event organized by the European Business Association in Kyiv on February 4.

Ms. Tymoshenko is proposing a brand of populism that includes amending the Constitution to change how the government is structured and run, and lowering household utility bills while keeping to borrowing commitments with the International Monetary Fund.

Mr. Zelensky is the beneficiary of the protest vote who is satisfying growing demand for fresh political faces with offers of direct democracy via referendums on governance priorities.

Former Defense Minister Anatoliy Hrytsenko is further behind with 8-10 percent support. He positions himself as pro-democratic and recently received backing from Lviv Mayor Andriy Sadovyi and former journalist Dmytro Gnap, both of whom pulled out of the presidential race to support him.

Perennial pro-Russian politician Yuriy Boiko, who was energy minister at the beginning of Viktor Yanukovych’s presidency in 2010, is polling at 10 percent. He is for the country’s federation by giving powers to local governments and wants to achieve peace in the Donbas war by “negotiating with all sides of the conflict.”

Corruption, financial fraud and vote-buying allegations have so far swirled around the top three contenders before some 35.9 million registered voters get to visit polling stations on March 31 in the first round of the election.

A four-part investigative series by bihus.info, a journalism group, revealed that Ihor Hladkovsky – son of the president’s longtime business partner Oleh Hladkovsky, who until recently was the first deputy secretary of the National Security and Defense Council (NSDC) – allegedly led a kickback scheme worth more than $9 million in the weapons industry. It furthermore alleged that all major law enforcement agencies, including the Western-backed National Anti-corruption Bureau of Ukraine (NABU), failed or dragged their feet to pursue procurement kickback leads in the defense industry sector. 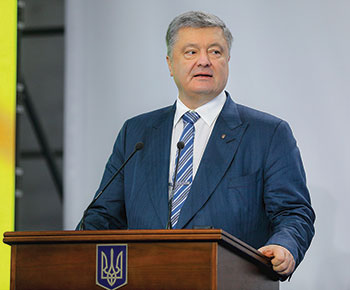 Incumbent Petro Poroshenko speaks during a working visit to Zhytomyr Oblast on March 11. The president is seeking re-election on a platform based on patriotism, a strong army and goals of Ukraine joining NATO and the European Union.

After dismissing his associate from the NDSC, Mr. Poroshenko promised there would “be no tolerance for corruption,” notwithstanding a perpetrator’s “name” or “position.”

NABU and the other law enforcement agencies have stated that they’re still either investigating nefarious weapons procurement deals or have successfully prosecuted some related cases.

Meanwhile, the Security Service of Ukraine (SBU) alleges that it unveiled an $82 million vote-buying scheme on behalf of Ms. Tymoshenko, 58, who made her fortune in the murky natural gas business two decades ago. She has dismissed the charges as pre-election mudslinging, saying that the accusations are “delusions disseminated by provocateurs in the SBU” that the president controls. Additionally, Radio Free Europe/Radio Liberty found that the heroine of the 2004 Orange Revolution allegedly received more than $5 million in campaign donations from ordinary citizens, some of whom said they never donated the money when approached by journalists.

“[The National Agency on Corruption Prevention] can investigate these matters,” she told RFE/RL. “We are transparent. Everything is done absolutely publicly. All our income and expenses are absolutely public.”

Some $41 million that originated in the fraudulent Privatbank that has since been nationalized allegedly went through the accounts of Mr. Zelensky’s Kvartal 95 Studio, National Deputy Volodymyr Ariev of the Petro Poroshenko Bloc maintained in a Facebook post complete with explanatory material and documents.

The U.S.-based risk management firm Kroll found in 2016 that at least $5.5 billion was fraudulently removed over 10 years from Privatbank, which was owned by Hennadiy Bogolyubov and Ihor Kolomoisky.

For more than a decade, the latter billionaire has aired Mr. Zelensky’s comedy shows and a TV series in which he plays a history teacher-turned-accidental president on his nationwide 1+1 channel.

The frontrunner had allegedly received the money as loans through intermediary companies run by Mr. Kolomoisky.

When contacted by The Ukrainian Weekly on March 13, Mr. Zelensky’s press service said it is not presently commenting on the matter. The candidate has declined two interview requests from The Weekly and has not responded to subsequently e-mailed questions that were sent on March 2 after information about the alleged money transfers had surfaced.

Mr. Poroshenko, 53, has touted the post-Euro-Maidan Revolution strides that have been made since 2014. These include delegating more power to local governments and expanding their tax bases, achieving visa-free travel to most European Union countries, and quickly revamping the military. He promises to have Ukraine ready for EU and NATO accession by 2023 and has enshrined Ukraine’s membership in both in the Constitution of Ukraine. He also secured an independent, canonically recognized Orthodox Church last year. 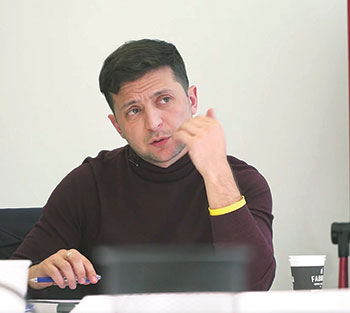 Mr. Zelensky has called NATO membership a “guarantee of Ukraine’s security” but wants to put it to a referendum, like many of his future governing priorities. While solidly stating that Crimea belongs to Ukraine, he wants to negotiate peace with Russia – but with the U.S. and Britain at the table.

He has insisted that longtime contractual relations with Mr. Kolomoisky are “strictly professional” and said that any money stolen from Privatbank should be returned to the state budget if proven in court. Former McKinsey consultant and Finance Minister Oleksandr Danylyuk and ex-Economic and Trade Minister Aivaras Abromavicius are Mr. Zelensky’s economic advisers.

Mr. Zelensky acknowledges that he is a surprise frontrunner and likened himself in a Bloomberg interview to previously unknown politicians Emmanuel Macron of France and Brazilian leader Jair Bolsonaro.

He has promised to continue fulfilling the reform efforts that are part of IMF lending commitments. Predominantly a Russian speaker, the comedian said that to love Ukraine requires “unity, regardless of sex, language, faith or nationality.”

Batkivshchyna Party leader Ms. Tymoshenko promises to halve household natural gas prices while somehow fulfilling IMF requirements. She believes that Ukraine should be a full-fledged member of NATO and the EU, but has been vague about achieving this or setting a target date.

She wants to change the Constitution to make Ukraine a parliamentary republic and is for increasing the minimum wage by three and a half times. Ms. Tymoshenko also supports holding a referendum to change how the central and local governments are run.

To secure peace in the Moscow-instigated Donbas war, she wants to hold talks with the signatories of the 1994 Budapest Memorandum whereby Ukraine gave up its nuclear arsenal in exchange for security assurances: Russia, the U.S. and Britain.

Mr. Zelensky, a native of Kryvyi Rih in southeastern Dnipropetrovsk region, enjoys popularity among the 18-35 age bracket and in the southern and eastern oblasts. Polls show that the more affluent voters perceives themselves to be, the more likely it is they’ll vote for him.

Pollsters and political scientists have noted that, historically, a third fewer of the young voters who said they would cast votes actually turn out on Election Day. However, given the demand for new politicians, Mr. Zelensky might be able count on these younger voters to come to the polls. He also has the highest approval and lowest disapproval ratings among the three frontrunners.

Voters age 56 and older tend to favor Ms. Tymoshenko and are found mostly in rural areas. Polls find that the less affluent voters are, the more likely they are to vote for her. Ms. Tymoshenko enjoys the most support in the central regions.

Mr. Poroshenko’s base is in western Ukraine and the city of Kyiv. He also has backing from more affluent and middle-aged voters.

Sociologists note that voters tend to vote in the first round based on personality and for the “lesser of two evils” in the second round.

Thus far, none of the three top candidates have held debates.