WARREN, Mich. – Sometimes, the greatest treasures are those that lie before you – unnoticed, tucked away on bookshelves or in rarely opened drawers. All it takes is a sudden realization for inspiration to take hold. Such was the case when members of Ukrainian National Women’s League of America Branch 96 perused their vast library of books at their local headquarters. This spurred the question: How many of these books were penned by Michigan authors?

As it turns out, over 200 books – in genres ranging from prose, poetry, non-fiction, memoir and drama to history, politics, journalism and more – were discovered. And this didn’t include commemorative publications, almanacs, bulletins or booklets of individual organizations. The publications span from the 1800s to the present, providing an interesting look back at the community activities of the earliest Ukrainian immigrants to the area.

The next step involved organizing the books by subject matter, compiling an electronic bibliography and displaying the publications in three large exhibit cases at the UNWLA headquarters. The final step was to introduce this treasure trove of history and literature to the local community, especially younger members who were likely not familiar with this rich past. The vision for an event was spearheaded by local author and longtime UNWLA Branch 96 member Myrosia Stefaniuk, who chaired the Word By Word Committee, lending her distinct creative touch to the program.

“It is amazing, given our Ukrainian history of suppression, oppression, deportation and confiscation that the Ukrainian word has somehow survived,” said Ms. Kizyma. “Not only has it survived, but it thrives from Shevchenko’s days of serfdom to the present, where a new generation of writers, poets and historians continue to promote information about our true Ukrainian heritage.”

Ms. Kizyma then introduced Ms. Stefaniuk, who served as program narrator and expertly provided a concise yet comprehensive historical overview of Michigan’s Ukrainian community and its publication output.

“With the written word,” said Ms. Stefaniuk, “we preserve our historic memory for future generations. Thus, the history of our published works cannot be separated from the development of our community.”

The “Word by Word” bilingual presentation focused on three distinct periods of publication – the late 1880s to World War II, post-World War II to the 1990s, and the 1990s to present – brought to life by select literary readings representing each era. And there was a unique twist to the program. All of the works were read by the actual authors or those related to the original authors. Four readers had the pleasure of reading works that their parents penned. 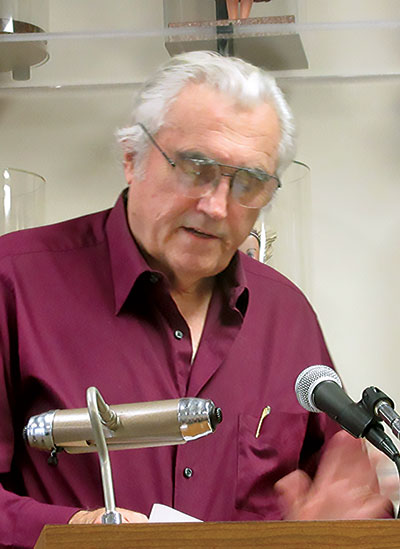 Alex Tarnavsky reads his father’s essay from “Road to Vysokyi Zamok” by Zenon Tarnavsky (1964). He also read an excerpt from his own work “Masters of Deceit” (2013).

Ms. Stefaniuk noted how even the earliest immigrants, who were mainly farmers and workers, understood the importance of the printed word and overcame various challenges by bonding with other Ukrainians, laying the foundations for church parishes, schools, community centers, and cultural and political associations, upon which later immigrants built and expanded. 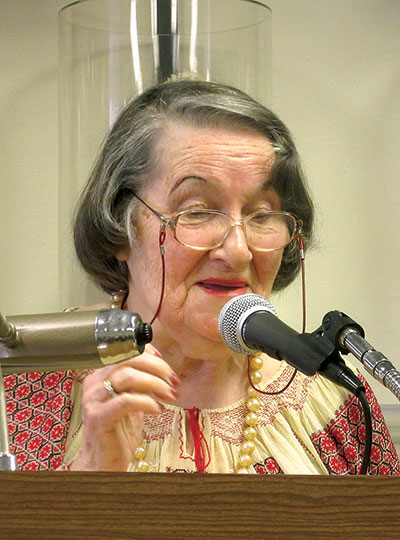 Women played a vital role in this by establishing reading rooms, children’s and women’s educational groups, as well as lessons and lectures to acquaint themselves and others about life in the United States and Ukraine. Dr. Mary Beck, the first female president of the Detroit City Council and a UNWLA member, was the publisher and editor of Woman’s World magazine.

During the 1930s and 1940s, central themes in various publications focused on local community events and concerns, as well as news of Soviet repression, the Holodomor, and terror and persecution in Ukraine. When World War II broke out, however, community activism and publications ceased altogether until the post-war wave of new immigrants.

According to records, over 30,000 new Ukrainian immigrants arrived in Detroit in 1949-1950. Many of these were refugees from displaced persons camps in Western Europe and included an extremely large number of writers, journalists, professors, artists, various professionals, social and political figures, and freedom fighters.

Social, cultural and political activities flourished with the new influx. New institutions, art ensembles, schools, publishing houses, bookstores and radio broadcasts sprang up. Every group and organization printed bulletins, newsletters, almanacs and commemorative yearbooks. Book collections and archives were updated and maintained. The main unifying factor for these political immigrants was the longing for their homeland and concern for Ukraine’s fate.

Like the immigrants who came earlier, the new arrivals found that adjusting to life in America was difficult and traumatic. Struggling against rapid assimilation, they strived to instill a sense of commitment to Ukraine in their children.

“Instrumental in this regard was Detroit’s Ukrainian Community Cultural Club, headed by literary and arts giants such as Edward Kozak, Zenon Tarnavsky, Bohdan Nyzhankiwskyj, Bohdan Lonchyna and many others,” said Ms. Stefaniuk. “Every weekend there were literary evenings, art exhibits, musical and theatrical performances, educational lectures as well as political forums and manifestations, and publication upon publication.”

Through the years, the reach of the written word expanded beyond the confines of the Ukrainian community, informing the American public and government about Ukraine’s rightful place among the nations of the world. During the 1960s and 1970s, when the Soviet regime savagely repressed artists and writers in Ukraine, Detroit’s Committee for the Defense of Ukrainian Political Prisoners wrote thousands of letters, petitions, press releases and informative publications beseeching the U.S. government and the world to pay attention and act.

By the 1980s, organizational membership dwindled as younger generations moved into distant suburbs and became more assimilated into American life. But everything changed in 1991 when Ukraine declared independence. It was the beginning of a new transitional period on both sides of the ocean. Economic hardships and the disparity between oligarchs and the general population led to millions of young Ukrainians leaving their families behind to work at menial jobs outside Ukraine.

Many settled in the Detroit area and, although their outlook differed considerably from the preceding wave as they did not have the same idealized vision of Ukraine nor similar identity issues, the now-blended community took on a new format. Additionally, the Internet, Skype and social media allowed for a free flow of information and completely changed the publishing world.

“Currently, the number of new publications here is limited,” said Ms. Stefaniuk. “We do have valuable archives and libraries. And in our display are books by new, younger-generation writers such as Alex Tarnavsky and Ksenia Rychtycka, who are participating in our program today. And there are at least a dozen other Michiganders who have published books in recent years. Most of these authors write in English, and the subject matter of their works is diverse, but interest in their heritage does not diminish. We also have many translations of Ukrainian literature into English and other languages – a vital process for Ukrainian works to be integrated into world literature.” 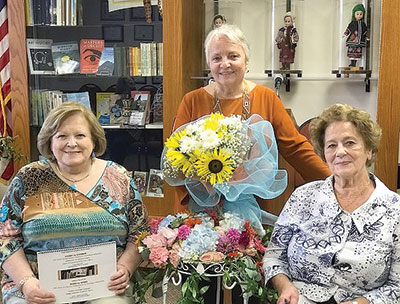 The afternoon ended with closing remarks by Marta Kwitkowsky, Branch 96 co-president, who thanked all those involved in helping to make the event a success, including all committee members and participants, archivists Daria Koniuch and Irene Petrina, Olha Liskiwsky, director of the Ukrainian American Archives and Museum, and Maria Vintoniv, Ukrainian Cultural Center librarian. She also singled out Ms. Stefaniuk for her vision in bringing the event to fruition.

Ms. Kwitkowsky then concluded with a poignant question to the audience: “What sort of literary legacy will we leave our future generations and will they willingly preserve it?”

If the varied literary readings from the day’s event were any indication, the written word is alive and thriving, and will continue to inspire future writers, poets, historians and journalists.

Those interested in obtaining electronic copies of the Michigan authors bibliography may contact Marta Kwitkowsky at mkwitkowsky@gmail.com.