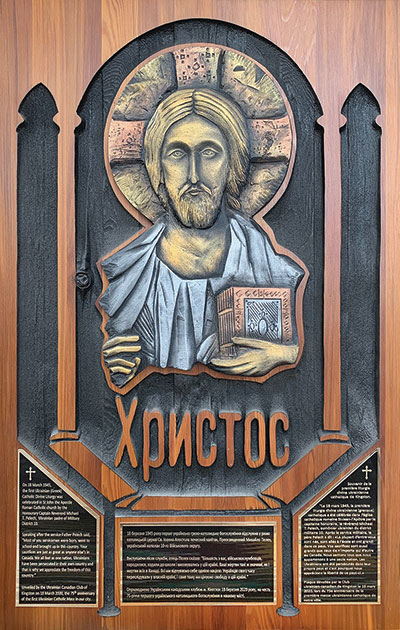 The icon of Christ Pantocrator and a trilingual plaque that were unveiled on March 18 at St. John the Apostle Roman Catholic Church in Kingston, Ontario.

You can find much more than you expect on just a page or two of a good local newspaper.

I had a hunch I could track down a particular story in the March 19, 1945, edition of The Kingston Whig-Standard. What I first noticed, however, was not what I went looking for. Instead a photograph of two Kingston men in uniform, at the top of page 2, caught my eye. One was Leading Aircraft­man G. D. Murray. The other was Leading Aircraftman A. F. Norris. A caption told me the latter was a “Regi” boy. The former went to KCVI, another high school in the city.

Now when I went to Regiopolis, the rival high school was Kingston Collegiate. Yet this photograph showed Murray and Norris as friends. Since they were previously members of the Princess of Wales’ Own Regiment they likely met at the Montreal Street Armory. I spent time there myself while in high school, with the 58th Squadron of the Royal Canadian Air Cadets. Of course, Norris and Murray experienced something vastly different, serving tours of duty with the RCAF’s Night Hawk Squadron. When this photograph was taken they were near Lille, in northern France, where their unit was deployed and remained until April 1945. Insofar as I can determine, Murray and Norris survived the war. I’d like to think they came home to enjoy decades of good health and well-deserved prosperity, even stayed friends. Certainly, both did justice to the PWOR’s motto whose words include “I Serve.” They did.

At the bottom of this same page I was again distracted, by a small advertisement for Brock Jewelers. Harald Marans owned this business. His storefront on Princess Street’s north side was a few steps from where the city’s “main drag” intersects with Bagot Street. My dad worked for Mr. Marans (I never called him anything but) for decades. Not only did he give my father a good job, but his wife, Katie, and their family often invited the Luciuks to the Beth Israel synagogue. Back then my parents were the strangers in this city, refugees helped by the descendants of previous immigrants. Many of the latter then still lived in the town’s “north end,” an overcrowded, industrial, somewhat impoverished, working-class area. We once had a Ukrainian hall there, at the corner of Bagot and North streets.

Sandwiched in-between the top and bottom sections of this page I found the story I was after. Titled “Ukrainians Are Lauded For Services,” it has no byline and, unfortunately, no photograph. As it continued on page 13, I ended up reading another article about how, on Saturday, March 17, St. John the Apostle Roman Catholic Church hosted a successful St. Patrick’s Day celebration, “Irish Concert Held Saturday.” Unexpectedly, I discovered Mary Wowk was there. She was the sister of Raymond Wowk, my partner Katharine’s father. Mary ended up marrying a local Irish lad, Jim Lawrence. 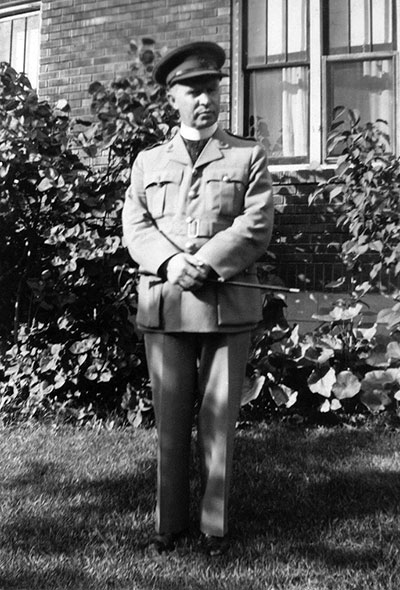 An honorary captain, the Rev. Michael Pelech, in 1942.

The news report about the Ukrainian gathering described how a “large” audience met at St. John’s at noon on Sunday, March 18, 1945, to participate in the first Ukrainian Catholic divine liturgy held in Kingston. Celebrating the mass was the honorary captain, Father Michael Pelech, padre for Military District 10, and Canada’s first Ukrainian Catholic chaplain. Local dignitaries present included Kingston mayor, Cecil Boyd; Msgr. L. J. Byrne; the local MLA (Member of the Legislative Assembly), Dr. Harry A. Stewart; the chief of police, R. J. Robinson; and Alderman C. P. Dalton, chairman of the local Red Cross Society. Chairing for the Ukrainian Canadian Committee’s Kingston branch – which he helped establish in 1942 – was Martin Chepesiuk from Fort William. His career as a physician is distinguished with a named scholarship at Queen’s University’s School of Medicine.

After celebrating liturgy, “in his native language,” Father Pelech addressed everyone in English: “Most of you servicemen were born, went to school and were brought up in this country. Your sacrifices are just as great as anyone else’s in Canada. We all feel as one nation. Ukrainians have been persecuted in their own country and that is why we appreciate the freedom of this country. At times there might be some misunderstandings but we get this everywhere and they always straighten out in a short time.” That final line intrigued me.

Now we can’t be sure about what Father Pelech said next. We read he spoke again but only “in his native language.” He could have said something about how Ukrainians in the ranks were over-represented in proportion to the size of their community in Canada, indeed probably should have. He didn’t. Instead he delivered an epistle for Ukrainian ears only.

About what? His life offers clues. He was a citizen of the Austro-Hungarian Empire when he immigrated in 1905. When the “Great War” broke out in 1914 he was of military age and obliged to register as an “enemy alien.” Already enrolled at the University of Manitoba and, by 1917, studying theology in Montreal, he was not further troubled. He was ordained as a priest on July 12, 1919, in Mundare, Alberta, by Nykyta Budka, the Ruthenian Catholic bishop of Canada. So Father Pelech had personal experience of Canada’s first national internment operations, had borne witness to thousands of Ukrainians and other Europeans enduring state-sanctioned indignities – not because of anything they had done but only because of where they had come from, who they were.

When he came to Kingston, Father Pelech probably knew the servicemen “training here” were barracked in the shadow of Fort Henry, Canada’s first permanent internment camp. It is unlikely any of them had any inkling about how this city’s most prominent fortification once held other Ukrainians prisoner. I suspect he first told them that truth, then offered thanks for their having volunteered for active service overseas. By doing so they demonstratively proved Ukrainian Canadian loyalty to this Dominion and the British Empire, helping insulate their community from punitive measures of the sort so many suffered needlessly during the first world war.

Msgr. Byrne’s message was markedly different. He simply said Ukrainian Canadians would always be welcome at St. John’s. Regrettably, his gracious gesture was forgotten. The soldiers soon dispersed while the city’s resident Ukrainian community remained small. It was not until these all-but-forgotten stories from the Whig-Standard were read again a few months ago that the importance of March 18, 1945, in the religious and military history of Kingston’s Ukrainian community became evident. So, with the help of Friar David from St. John’s, we organized an ecumenical and commemorative service on March 18 to honor the Kingstonians who fought to preserve our freedom during the second world war and the many Ukrainian Canadians who stood alongside them.

Mark this occasion with a prayer or words of thanksgiving recalling the sacrifices of all our men and women in uniform. Meanwhile, an icon of Christ Pantocrator and a trilingual plaque will be unveiled and blessed at St. John’s to remind the faithful and passers-by in years to come about what happened here 75 years ago and in our time. And please do visit St. John’s when you can. Msgr. Byrne would rejoice in knowing the kind welcome he offered Ukrainian Canadians decades ago has now been shared with all of you, in his good memory.

Lubomyr Luciuk is a professor at the Royal Military College of Canada in Kingston, Ontario.