HILLSIDE, N.J. – During 2016, Canadians celebrated the 125th anniversary of Ukrainian immigration to Canada. It is therefore fitting to remember Father Nestor Dmytriw, the first Ukrainian Catholic priest to celebrate the divine liturgy in Canada – at Terebovlia, Manitoba, in April 1897. 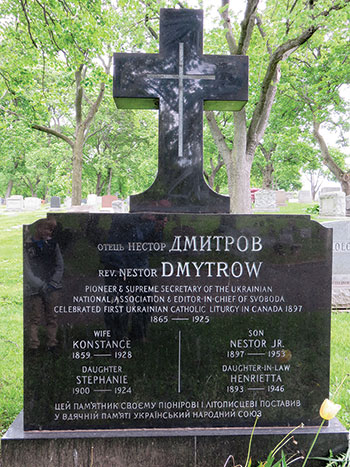 Father Dmytriw died on May 25, 1925, and is buried at Evergreen Cemetery in Hillside, N.J. Ironically, Father Dmytriw’s gravesite was unmarked for over 60 years. He was the “forgotten priest” who had done so much for our early Ukrainian settlers in Canada and the USA.

A parishioner of Immaculate Conception Ukrainian Catholic Church in Hillside, Olga Shatynski, happened to be visiting the Ukrainian festival in Dauphin, Manitoba, in 1981 with her family and coincidentally picked up a brochure which mentioned that Father Dmytriw was buried in Hillside/Elizabeth, N.J.

After visiting Fr. Dmytriw’s gravesite and seeing no marker, Mrs. Shatynski launched a four-year effort to find surviving relatives of Father Dmytriw in order to ask permission to have a monument placed on his gravesite at Evergreen Cemetery. After painstaking research via various records offices in many towns (and before the days of Internet searching), Mrs. Shatynski found a surviving direct relative of the priest Dmytriw and received permission to have a monument installed.

Through the financial support of the Ukrainian National Association, the Hillside parish coordinated the effort to erect a seven-foot monument of Portuguese black marble on Father Dmytriw’s grave. The monument was dedicated on October 24, 1985. Thus, the “forgotten priest” would be remembered forever.

What is amazing is that the Hillside parish had absolutely no connection to Father Dmytriw. The parish was founded in 1957 – 32 years after he died). However, to this day, Hillside parishioners visit Father Dmytriw’s gravesite to say prayers for the repose of his soul.

A great and humble servant of God is now remembered. It is difficult to imagine the hardships that Father Nestor Dmytriw encountered as he attended spiritually to the early Ukrainian settlers in Canada. His writings in Svoboda talk about traveling barefoot through swamps in Canada to visit the various Ukrainian settlements in Canada and having to walk large distances because the trails could not accommodate wagons.

Father Dmytriw also talks about temporary accommodations at the Immigration Home in Dauphin, as “People crowd together in the building like a swarm of flies. It is dark and noisy: a dim light coming from a small lamp barely lights one corner of the shack.”

As Canadians reflect on the 2016 celebration of the 125th anniversary of Ukrainian immigration to Canada, it is worthwhile to remember Father Dmytriw, one of the greatest spiritual and community leaders of those difficult early days.