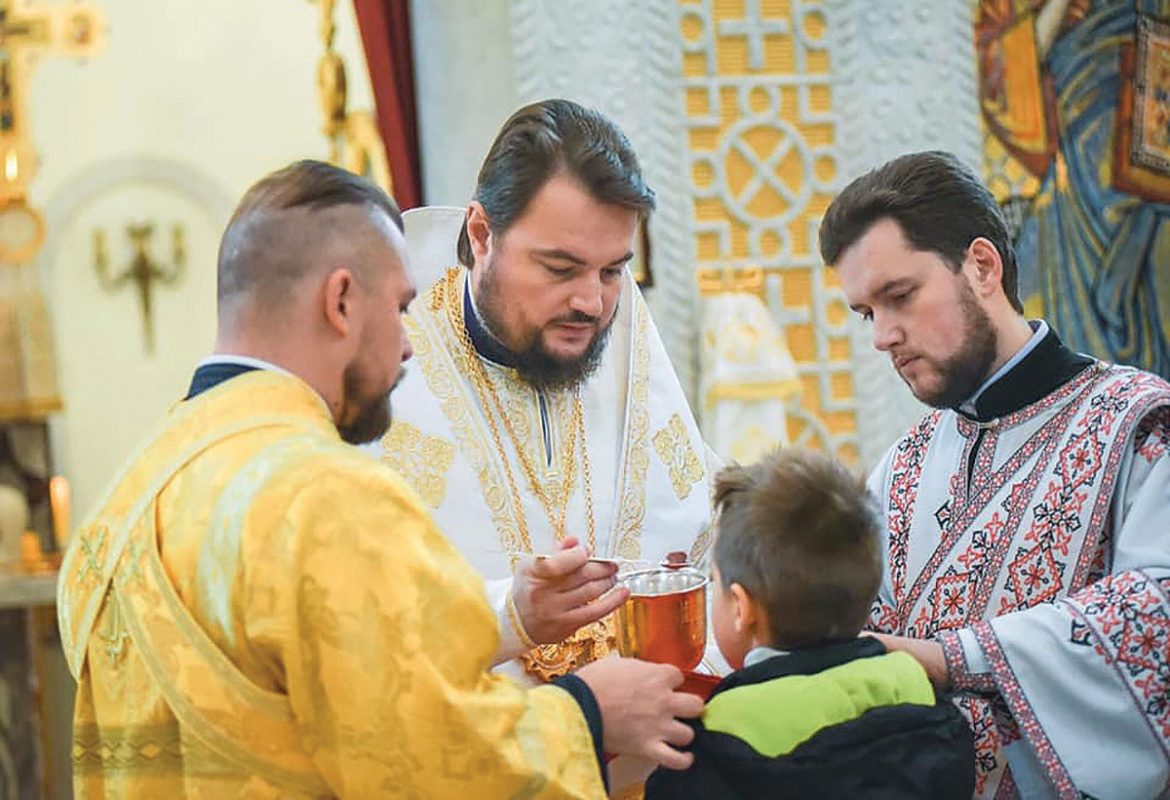 Seen on November 28 is Archbishop Oleksandr Drabinko, who was one of only two Ukrainian Orthodox Church – Moscow Patriarchate hierarchs to attend the Unification Synod last month in Kyiv that elected Metropolitan Epifaniy to head the newly created Orthodox Church of Ukraine.

According to an interactive Google map administered by the OCU, as of January 24 most of the parishes making the switch are located in western and central Ukraine. Six are in the eastern and southern parts of the country: one in Luhansk, two in Dnipropetrovsk, one in Zaporizhia and two in Odesa oblasts.

The last two parishes to make the switch were in Zhytomyr Oblast, according to that region’s state administration, bringing the total number there to six.

Chronologically, the second Ukrainian Orthodox Church – Moscow Patriarchate (UOC-MP) parish to make the switch is Transfiguration of Our Lord Church in the southern Kyiv neighborhood of Teremky, where Archbishop Oleksandr Drabinko serves.

He and Archbishop Symeon Shostatsky of Vinnytsia were the only two representatives of the UOC-MP who took part in the December 15, 2018, Unification Synod in Kyiv that elected Metropolitan Epifaniy (Serhiy Dumenko) to lead the OCU.

Afterwards, the UOC-MP ordered the two to stop their religious ministry.

In an interview with The Ukrainian Weekly on January 24 via Facebook Messenger, Archbishop Oleksandr, 41, said two main factors were behind the decision to join the OCU.

“My main motivation was to end the ‘schism’ that has lasted over 25 years,” he said, referring to the emergence of two more Orthodox Churches in addition to the UOC-MP after Ukraine regained independence in 1991. The UOC-MP had been the only canonically recognized Church in the country. The other two were the Ukrainian Orthodox Church –Kyiv Patriarchate (UOC-KP) and the Ukrainian Autocephalous Orthodox Church.

He noted that “we haven’t had unity” inside the country and that “Moscow couldn’t end the religious division in the country,” yet the Ecumenical Patriarchate in Istanbul “did.”

Another reason, according to Archbishop Oleksandr, is that the “UOC-MP is subordinate to the Russian Orthodox Church, which is the aggressor state that annexed my beloved Crimea, wages war in the Donbas and hybrid war using Churches whose actions divide society.”

The parish he serves voted for the affiliation change on December 18, 2018 – a day after Archbishop Symeon’s flock in Vinnytsia became the first to make the switch.

The ROC has rejected the canonical status of the OCU that was bestowed on January 6 via the Tomos of autocephaly. It also severed all relations with the Ecumenical Patriarchate and its leader, Bartholomew I of Constantinople, known as the “first among equals” in the Orthodox world of 300 million believers. Furthermore, the UOC-MP has thus far refused dialogue with the newly created Orthodox Church of Ukraine.

Communities wishing to switch Church affiliation must achieve a two-thirds majority, according to a bill that the Verkhovna Rada adopted on January 17. An earlier law, adopted on December 20, 2018, stipulates that Churches whose “head office or administration” is located in an “aggressor state” must re-register in the next four months.

The UOC-MP is currently registered as the Ukrainian Orthodox Church. It maintains that it is independent from Moscow and autonomous.

“It is easier to make a choice when all things are called by their names,” President Petro Poroshenko said then.

While visiting Zhytomyr Oblast on January 7, the president said that a “canonical, autocephalous Orthodox independent unified Ukrainian Church exists that doesn’t start with a prayer for ROC leader Kirill, who prays for the Russian government, for the Russian army that kills Ukrainians.”

The UOC-MP says it has 12,000 registered parishes in Ukraine, but Archbishop Oleksandr told The Weekly that about 10 percent of them exist “only on paper, they’re virtual communities.”

According to a nationwide Razumkov Center poll that was published on April 26, 2018, less than 14 percent of Orthodox believers identified with the UOC-MP, and twice that with the Ukrainian Orthodox Church – Kyiv Patriarchate.

OCU primate Metropolitan Epifaniy said that normal relations will gradually be restored with those who decide to remain in the Russian-affiliated Church and that they shouldn’t feel pressure in Ukraine. He made those comments in an interview with the Greek newspaper TaNea that he shared on his Facebook page on January 23.

Despite warnings from the ROC that violence will ensue during affiliation shifts, the OCU metropolitan said that “instead, we see a completely peaceful process of parishes in Ukraine joining the new Church, and we will make every effort to continue this way.”

Metropolitan Epifaniy noted that a “certain number of parishes in Ukraine will remain subordinated to the Russian Orthodox Church… This is logical and we have no objection to this… They shouldn’t feel any pressure… These parishes should have equal rights with those who belong to the Orthodox Church of Ukraine.”

The OCU is still in the process of registering with the state and hasn’t determined administrative positions or a clerical hierarchy.