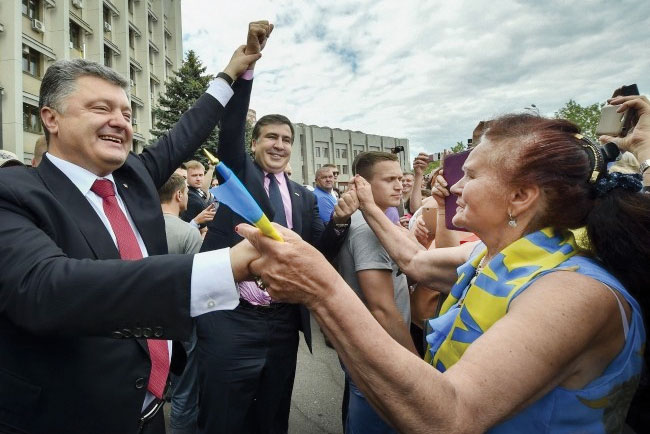 Odesa Oblast Governor Mikheil Saakashvili with President Petro Poroshenko during his working visit to the oblast on May 30.

Following his appointment as chairman of the oblast state administration (or governor) of Odesa by Ukrainian President Petro Poroshenko (see Eurasia Daily Monitor, June 2, 4, 5), Georgia’s former president, Mikheil Saakashvili, has outlined his policy priorities in the post newly entrusted to him. Mr. Saakashvili holds a strong political mandate from the Ukrainian president to jump-start reforms in this oblast, against daunting challenges. However, Ukraine’s legal and administrative system makes it difficult for the president to use – or provide the governor with – instruments of power commensurate to the magnitude of the appointed task in Odesa (see EDM, June 22).

In a series of inspection visits, conference presentations and media statements, Saakashvili has broadly outlined a program of reforming this oblast. Starting from personnel issues, the program looks at a short-term horizon of six months and a follow-up stage beyond that. The salient points (UNIAN, Ukrinform, June 10, 12, 14; Dozhd TV, June 10; Dumskaya, June 10, 14, 16, 17) include:

• Paring down the gubernatorial staff from its present size of 800 to as few as 50, and recruiting talent to fill only some of the slots vacated. Appointing new heads of all 26 district-level (raion) administrations in the Odesa Oblast through an open competition process that has already been launched. Mr. Saakashvili has warned that any nepotistic intercession would result in the candidate’s instant elimination from the competition. Mr. Saakashvili describes the bureaucratic holdovers for the most part as useless or worse.

• Deploying the new police patrol service in the city of Odesa by August, following the reorganization of that service on the Georgian model and the first deployment in Kyiv (see EDM, June 22).

• Cracking down on business extortion, raiding and monopolies in the public and private sectors – those practices that discourage foreign direct investment.

• Reorganizing the customs service and tax administration, both notorious for corruption in their ranks (the governor, however, does not have direct authority over those institutions, they are subordinated to Kyiv).

• Adopting in Odesa the Georgian “House of Public Service” system, where citizens obtain a full range of notarial and administrative services online, usually within minutes, and precluding bribery.

• Capital repair of the Odesa-Reni motorway, which connects Ukraine with European Union territory in Romania.

• De-monopolizing air travel and preparing a tender to build a modern international airport in Odesa.

• Initiating the privatization of the state-owned Odesa Port Plant (rated as Ukraine’s largest chemical enterprise) and preparing the ports of Yuzhne and Illichivsk for possible privatization, by open tenders in each case, under international and civil society scrutiny.

During walkabouts in Odesa and inspections in the oblast, Mr. Saakashvili has been approached by businessmen and other citizens who complained about police extorting bribes (protection money) and police complicity with drug dealers. In another publicized episode, Odesa prosecutors have threatened two local entrepreneurs with criminal cases, apparently for extortion purposes. In his latest staff meeting with prosecutors and other law enforcement officials, Mr. Saakashvili denounced the involvement of law enforcement personnel in cases of extortion, racketeering, “terrorizing” business and renting out state-owned land or approving illegal construction for bribes (Dumskaya, June 17).

Mr. Saakashvili is sharing these cases with the public on television, lashing out at “racketeer-policemen” and “bandit-prosecutors” to illustrate the magnitude of the challenge. He is about to push through the reform of police in the Odesa Oblast (see EDM, June 22), but he cannot directly tackle the prosecutor’s office at the oblast level. Instead, for now, he informs Ukraine’s Procurator General Viktor Shokhin about such abuses.

Embarking on this mission as governor, Mr. Saakashvili identified some close parallels between Georgia’s circumstances before 2004 and co-existing with the criminal underworld, incompetent and chaotic administration, clans and power brokers overriding the legal state, disincentives to foreign direct investment, decaying infrastructure when not lacking altogether, and a general failure to connect with the modern world – these features seem to characterize the Odesa Oblast today as they did Georgia some 10 to 15 years ago.

Television news and other video coverage of Mr. Saakashvili’s public appearances invariably show a friendly reception on the part of citizens in the streets, participants in conferences and journalists at media events. A political honeymoon is clearly in evidence. Were it to persist, the televised images accompanying it would almost certainly reverberate politically in Georgia.

The article above is reprinted from Eurasia Daily Monitor with permission from its publisher, the Jamestown Foundation, www.jamestown.org.