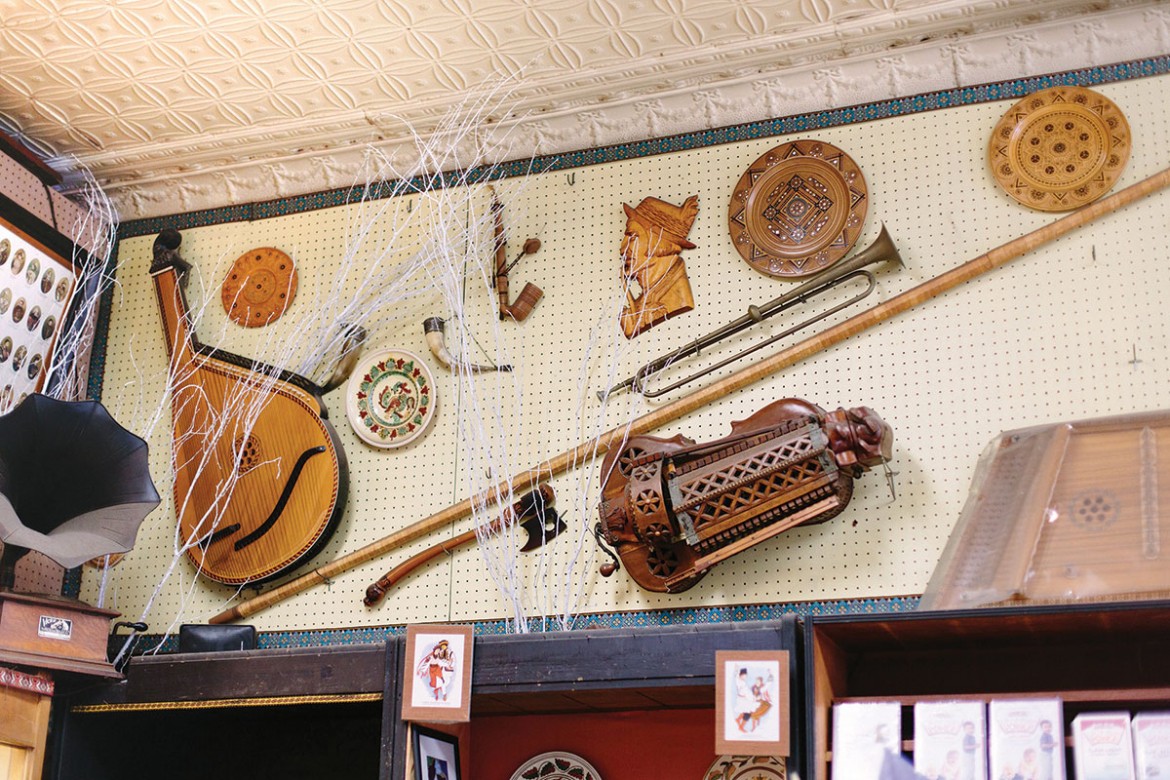 Ukrainian musical instruments on the wall at Surma.

NEW YORK – For me, the Lower East Side in the 1960s was part of Ukraine. St. George Church. The Arka gift shop. The Howerla bookstore. Orchidia Italian-Ukrainian restaurant. The coffee shops Leshko, Odessa and Veselka. You could wander from block to block soaking up the culture of the old country and hearing the pleasant sounds of spoken Ukrainian floating in the air. And the center of this magical Eastern European world was Surma.

Surma on East Seventh Street was like a lens sharply focusing all those bits and pieces of my Ukrainian ancestry in one very inviting place. The smell of beeswax and the sounds of Ukrainian music coming from the record player always greeted me. As you walked through the door a bell tinkled in a welcoming way with each new customer. (It still does today.) And there behind the counter on Sundays you could see Myron Surmach Sr., the founder of the Surma Book & Music Co. 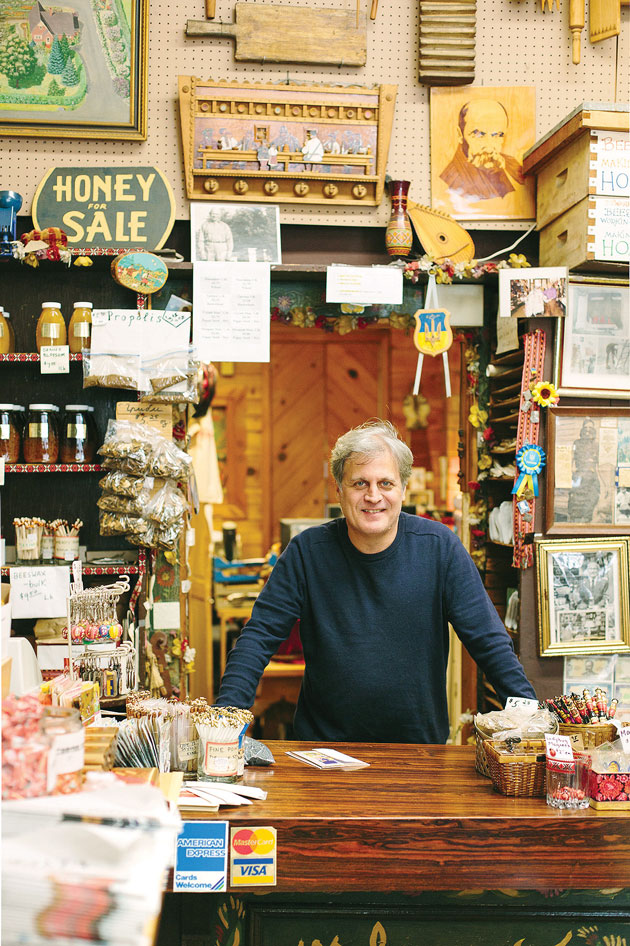 Myron Surmach arrived at Ellis Island in July 1910 after traveling 21 days on the ship Atlanta from Trieste. He left his family in Zheldets (Желдець), in the Lviv region of Halychyna (also known as Galicia), which is now part of Ukraine. His older brother had already arrived in America in 1909 and invited him to come.

At the time, immigrants were required to have $25 with them to enter the country. “ … To get $25, mama had to sell the cow…,” said Mr. Surmach in a 1985 interview with the Ellis Island Foundation. By 1910, there was a flood of Ruthenians (as Ukrainians were known in Austria-Hungary at the time) from Galicia who made their way to the northeast of the U.S. The anthracite coal mines of Pennsylvania needed strong backs to dig the black diamonds and send them to fuel homes and the rapidly growing industrial centers.

After leaving Ellis Island, 17-year-old Myron (his passport said he was 15, but he lied to the village secretary about his age in order to avoid the draft in Austria) hopped a train in Hoboken, N.J., and headed for Wilkes-Barre, Pa. He settled in a thriving Ukrainian immigrant community there and found a job with a company making springs for wagons and carriages. Although he went to school for only about three years in Zheldets, he had a natural love of books and brought a few with him. In Scranton, Myron bought more at a Ukrainian bookstore and began selling them to the other immigrants. 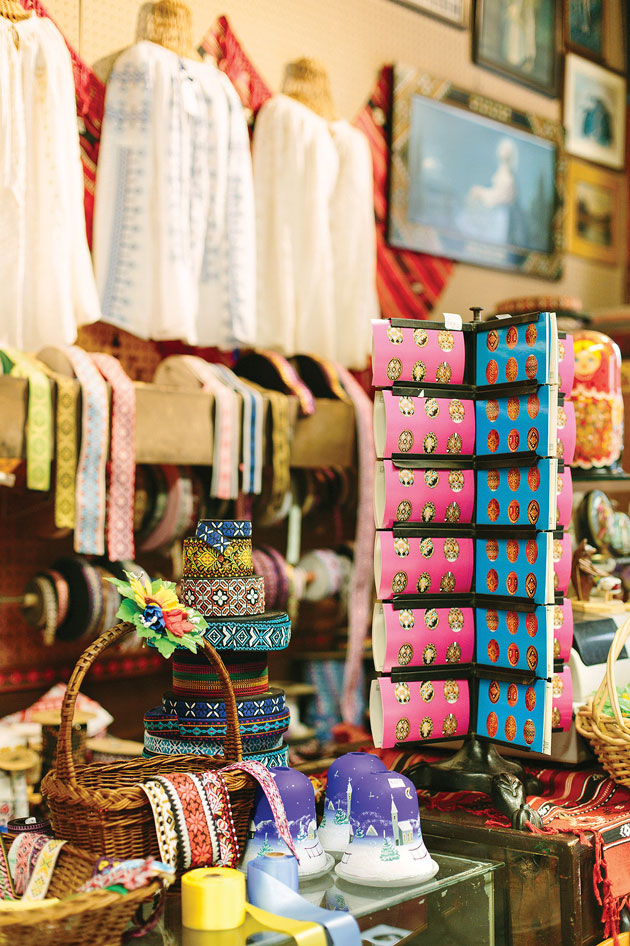 Ukrainian blouses and other wares at Surma.

After he lost his job at the spring shop (when the demand for carriage springs greatly declined due to the new manufacture of Ford automobiles), he wrote to a friend who had left Wilkes-Barre for Brooklyn, where he became a dishwasher and a busboy at a restaurant. The friend invited him to come, and Myron went to New York.

While working at the restaurant, he joined a gymnastics group run by the Czech community. In 1918, he decided to start selling gymnastics clothes and added some books as well. And so, Surma, the Ukrainian shop, was born.

As Markian Surmach, the grandson of Myron Sr. and the current owner of Surma, points out: “My grandfather offered services to the Ukrainian immigrant community to help them become Americans. He would read their letters to them in the store and offer other services. Later on, he added a variety of goods, including appliances, such as washing machines, radios and phonographs.” The store was moved around to several different locations before it came to rest at the current one.

One of the early popular offerings was ethnic music. In a 1975 interview with the Finnish ethnomusicologist Pekka Gronow, Myron Sumrach talked about his early involvement with the ethnic music business in the 1920s and ’30s. At the time, the production of “foreign” records was economically important in the music business, but tightly controlled by the companies Columbia and Victor. Surmach managed to obtain a phonograph from a Jewish shopkeeper.

He met Pavlo (Paul) Humeniuk, a Galician instrument maker and fiddler, whose kolomyikas were very popular with Ukrainians. He then introduced Humeniuk to an agent for Columbia in his store and the fiddler was given a long-term contract with the record company to produce Ukrainian, Russian and Polish music.

Surmach became an advisor on ethnic music to both the Columbia and Victor record companies. He also started a music school for children, produced sheet music and piano rolls, and in 1928 started a 15-minute Ukrainian radio program, which aired on various New York radio stations for 17 years. The show talent came from his musical school, Humeniuk and others. During the World War II period, about 80 78-rpm records were released by companies like RCA on his Surma, Fortuna and Bayan labels.

When Myron Surmach’s son Myron Jr. returned from his Navy service in World War II, he agreed to take over the business from his father. A major new wave of Ukrainian immigrants arrived in the New York area in the 1950s and early ’60s as a result of their displacement in Europe after the war. Myron Jr. moved away from his father’s emphasis on ethnic music and appliances, and built up the cultural aspects of the store, including the sale of Ukrainian blouses and shirts, which he sourced in Eastern Europe. He also added handicrafts and porcelain, and focused on the sale of pysanky (Ukrainian Easter eggs) and the materials used to make them.

Myron Sr. retired in the 1950s to his farm in Saddle River, N.J., where he spent his time growing vegetables and beekeeping in his own apiary. The honey produced from the apiary was sold at Surma. He still came into the store on Sundays when Myron Jr. would take his day off.

It was not easy for Myron Jr. to source Ukrainian goods from the Soviet Union. Things would “disappear” in the shipments and there was an import duty of almost 100 percent of the value of the products. During the late 1960s, the Surma shop was discovered by the hippie generation. Markian remembers his dad coming home talking about the new music celebrities who would stop by the store. Members of the rock bands The Mamas & The Papas, Jefferson Airplane and The Doors shopped at Surma for Ukrainian embroidered blouses and men’s shirts whose style fit their bohemian life style.

During the 1980s, the Ukrainian music scene in North America continued to evolve. Many selections from the Canadian prairie provinces, as well as U.S. artists, were stocked at Surma on cassette tape and eventually CDs. I remember visiting the store on Saturdays and listening to the melodious singing of Kvitka Cisyk, the Queens-born artist who created a unique Ukrainian American sound for traditional Ukrainian folks songs. The store also carried videos of Ukrainian films such as “Shadows of Forgotten Ancestors” directed by the famed Serhii Paradzhanov based on a story by Mykhailo Kotsiubynsky.

With all these resources so close by, it was easy and fun to keep in touch with Ukrainian culture even for a third-generation novice like myself.

Markian Surmach is the current proprietor of Surma. His grandfather passed away in 1991 at the age of 98. His dad died in 2003 at the age of 71. Markian came back from Colorado to run the store. He said: “When I took over at Surma, everyone thought I would make a lot of changes. But why fix what isn’t broken?”

The store today looks exactly as it did when I first started visiting it in the 1960s. The picture of Taras Shevchenko looks down at us in a fatherly way from his spot high up on the left wall. Ukrainian books, newspapers, clothing, handicrafts, greeting cards and, of course, the ever popular honey rests on the shelves and counters around the store.

Markian related how there is a new clientele in Surma. This happened as a result of the major changes in Ukraine in the past year from the Euro-Maidan movement and a new notoriety for the country in the world media. Unlike in the past, when members of the local third wave of Ukrainian emigration to the U.S. frequented the store, now people who have even the least bit of Ukrainian ancestry come to find out more about their past. Visitors now arrive from all over the world to get in touch with the old country and sample this small piece of Ukraine on East Seventh Street.

I asked Markian how long Surma would last. “As long as my personal interest in Ukraine continues and evolves,” he said, “Surma will be here.”

And so, as my own children have always enjoyed this very special Ukrainian cultural place in New York City, I’m hoping that my grandchildren and their children will also come to experience their ancestry here at Surma.

Mike Buryk is a Ukrainian American writer whose research focuses on Lemko and Ukrainian genealogy and the history of Ukrainians in the United States. He is a founding member of Nashi Predky, a Ukrainian genealogy and family history group. You can contact him at: michael.buryk@verizon.net. His website is: http://www.buryk.com/our_patch/ . Photos for this article were taken by Alexis Buryk of City Love Photography, http://www.citylovephotography.com.