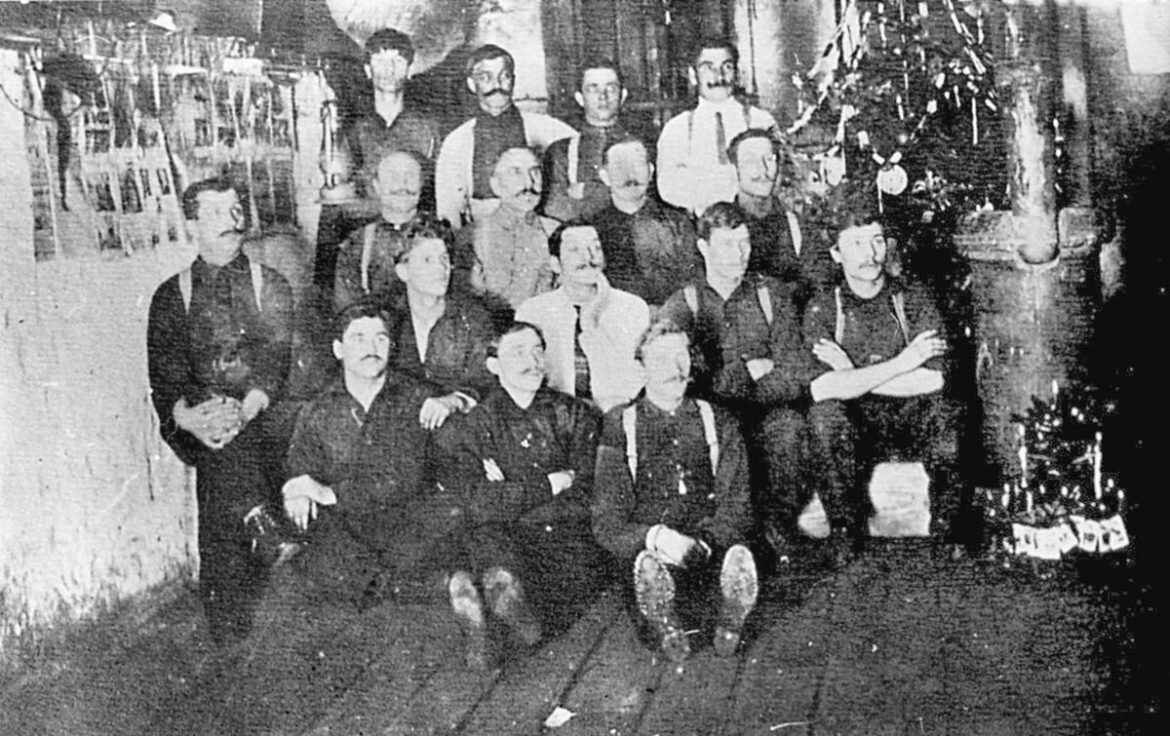 Nick Sakaliuk (first from left, seated on floor) inside Fort Henry with other Ukrainian internees around Christmas in 1915.

It all began in Kingston. I was a young graduate student, working on an M.A. in geography under the direction of Prof. Peter Goheen at Queen’s University. He urged me to write about this city’s small Ukrainian community. I resisted, convinced the topic was parochial, quite pedestrian. But I did as I was told. His advice proved prescient.

Another Queen’s professor, the History Department’s Richard Pierce, recommended I do oral histories since the archival record about Ukrainians in Kingston was very limited. So, over several months in 1977-1978, I went about with a tape-recorder, asking questions of the sort you might expect – all the while wondering how any of it would amount to anything deserving of an M.A. The professor’s plan panned out.

I recall the day I went to chat with Mrs. Charitoniuk, on Colborne Street. A widow and interwar immigrant, whose husband had served in the Canadian armed forces in World War II, she was always generous when we came caroling at Ukrainian Christmas. Yet I also thought she was odd. So I wasn’t expecting much.

I couldn’t have been more wrong.

What she told me altered the course of my life, personally and professionally. For, when I asked if there had been Ukrainians in Kingston around 1914, she shared a name, one I had never heard before: Nick Sakaliuk.

I found him in Toronto on February 14, 1978, Valentine’s Day. When I asked whether he had been in Kingston during the Great War, he confirmed he had, even told me the date on which he arrived, October 17, 1914. I thought it remarkable how he recalled a precise date more than six decades after the fact. Paying that detail no mind, however, I went on to ask about where he had worked – was it in the Davis Tannery, at the Locomotive Works or perhaps at the grain elevators out in Portsmouth Village? Nope, he said, “I was up in Fort Henry.” A mason repairing the fortifications, I questioned? No, he nonchalantly replied, “I was a prisoner.”

After that, I did not know what to ask. I had never been told or taught that Ukrainians and other Europeans were branded as “enemy aliens” under the War Measures Act during World War I, or of how thousands were subsequently transported to 24 camps set up across the Dominion. I did not know Fort Henry was Canada’s first permanent internment camp. And I am Kingston-born.

Most men confined up in the fort were “first class” (that is German) POWs. Those deemed “second class” – racialized Eastern Europeans – would be dispersed into this country’s frontier hinterlands, held behind Canadian barbed wire and forced to do heavy labor under armed guard for the profit of their jailers. Sakaliuk was shipped to Canadian Forces Base Petawawa in Ontario, to help carve an artillery range out of the boreal forest, then sent to an even more distant location in Ontario, Kapuska­sing, there to build an experimental agricultural farm. It exists to this day.

Intrigued by what Sakaliuk recounted I did more research and, thanks to Dr. Bryan Rollason, an external examiner for my M.A. defense, I prepared a booklet, in 1980: “Internment Operations: The Role of Old Fort Henry in World War One.” After that, I did not think much about this subject until 1988, when Dr. Pierce’s Limestone Press published “A Time For Atonement: Canada’s First National Internment Operations and the Ukrainian Canadians, 1914-1920.” This booklet’s title was derived from a comment found in The Daily British Whig. Writing on September 7, 1917, about the War Time Elections Act, which disenfranchised thousands of “enemy aliens” even as it extended the right to vote for some Canadian women (so securing the electoral victory of Robert Borden’s Unionist government and trouncing Wilfrid Laurier’s Liberals) an unknown editorialist remarked:

“It is very probable that if this proposal becomes law, the ‘alleged’ foreigners and hitherto ‘naturalized’ Canadians will bear their reproach meekly, but they will have sown in their hearts the seeds of a bitterness that can never be extirpated. The man whose honor has been mistrusted, and who has been singled out for a national humiliation, will remember it and sooner or later it will have to be atoned for.”

Inspired, I sallied forth to secure the predicted atonement. The campaign took decades. Finally, on May 9, 2008, the Government of Canada, as represented by Jason Kenney, then minister for multiculturalism, and the present-day premier of Alberta, signed an agreement providing for symbolic redress. Fittingly, this happened at the Stanley Barracks, in Toronto, once an internee “receiving station.” That endowment has since supported various memorial and educational projects across Canada, including a permanent exhibit at Fort Henry and the publication of “Enemy Alien,” a graphic history based on the previously-unknown diary of a Ukrainian internee warehoused at Stanley Barracks before being sent to Kapuskasing. This novel was penned by my daughter, Kassandra Luciuk, a historian, and her collaborator, the graphic artist Nicole Marie Burton. And on June 20 of this year, the 100th anniversary of the end of Canada’s first national internment operations, all of the victims will be hallowed, nationally. I’m sure Nick Sakaliuk is pleased.

Mrs. Charitoniuk mentioned another man I had never heard of before but met later in Montreal: Bohdan Panchuk. What that Ukrainian Canadian veteran did during the second world war also changed my life. But that story is best left for another telling.

Lubomyr Luciuk is a professor of political geography at the Royal Military College of Canada in Kingston, Ontario.