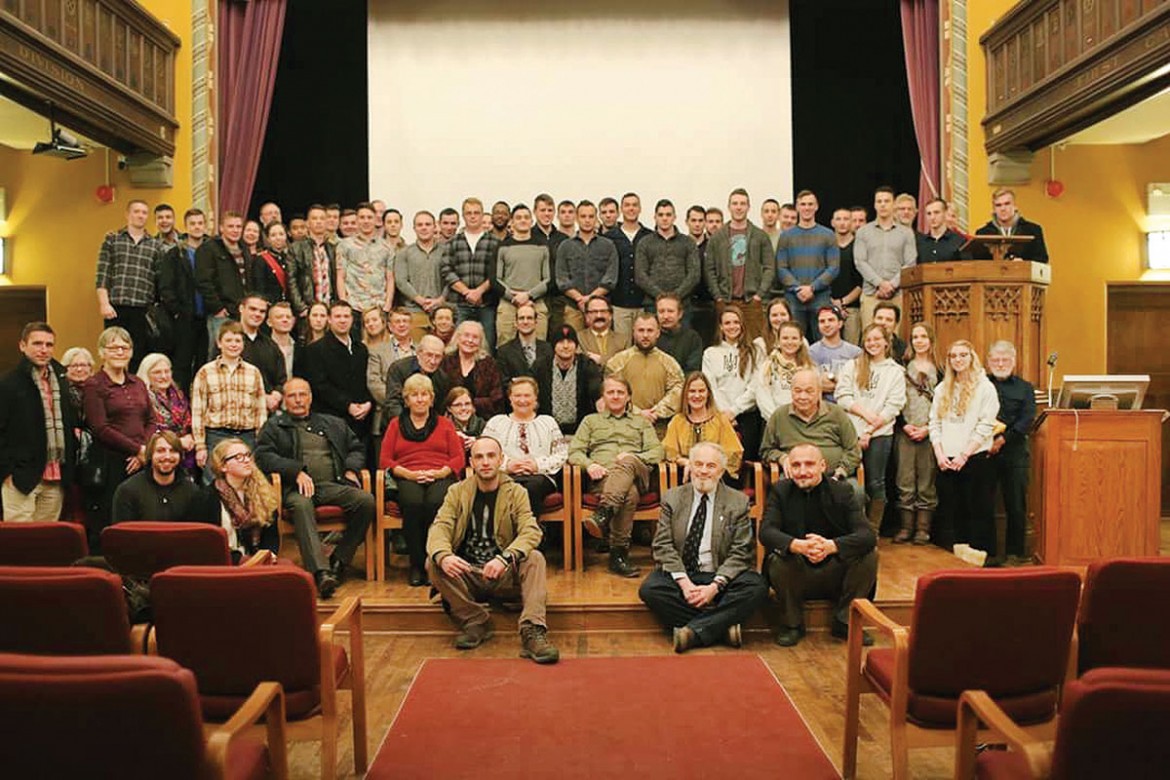 Some audience members after the screening of “The Ukrainians: God’s Volunteer Battalion,” in Currie Hall of the Royal Military College of Canada.

Co-sponsored by the Department of Political Science and the Ukrainian Canadian Club of Kingston, the film documents the 2014 Russian invasion of eastern Ukraine and, in particular, the lengthy battle for Donetsk airport that witnessed Ukrainian volunteers stepping forward to defend Ukraine, the regular army having been caught unprepared for both the Russian occupation of Crimea (February-March 2014) and subsequent incursions into eastern Ukraine, which continue to this day.

Despite several truces proclaimed at Minsk, the film shows how fighting continued without let-up to the present day, although regular army forces have now taken on more of the fighting, incorporating into their ranks those whom Prof. Lubomyr Luciuk, the evening’s organizer, described as “Ukraine’s minutemen.”

Filmed and produced by Leonid Kanter and Ivan Yasniy, this documentary evoked the chaos, destruction and heroism of close-quarters combat – while the Ukrainians were eventually forced out of Donetsk airport, itself utterly destroyed, the valor of these fighters – of whom some 60 percent were described as being Russian-speaking citizens of Ukraine including even some volunteers from Russia – demonstrated the Ukrainian nation’s resolve to defend its territories against unprovoked aggression.

During a lively question-and-answer session following the film screening, the directors, along with Serhiy Fomenko, the founder of the Path to Freedom organization, and a Ukrainian “cyborg” soldier whose nom de guerre is Fezzan, answered questions about who they are and why they took up arms in defense of Ukraine.

Fezzan pointed out that when his troop went to war all they had were hunting rifles and knives. Later their weaponry improved, to the point where there was one assault rifle for about every 10 fighters. Just before he left the front lines, only a week or so ago, the situation was even better, with one Kalashnikov rifle for every three soldiers.

In contrast their opponents, the so-called “separatists” of Ukraine’s Donetsk and Luhansk regions, were well-equipped with regular Russian army weaponry, including main battle tanks, artillery, and rocket launchers. The Ukrainians were thus forced to arm themselves by first defeating their enemies.

The large audience appreciated having a frontline report from young men only recently aged in battle, offering a good round of applause in particular for Fezzan – one of Ukraine’s top snipers who will soon be returning to the eastern front. The film tour is continuing across Canada, with screenings in Winnipeg, Manitoba; Calgary and Edmonton, Alberta; Vancouver, British Columbia; and Toronto.