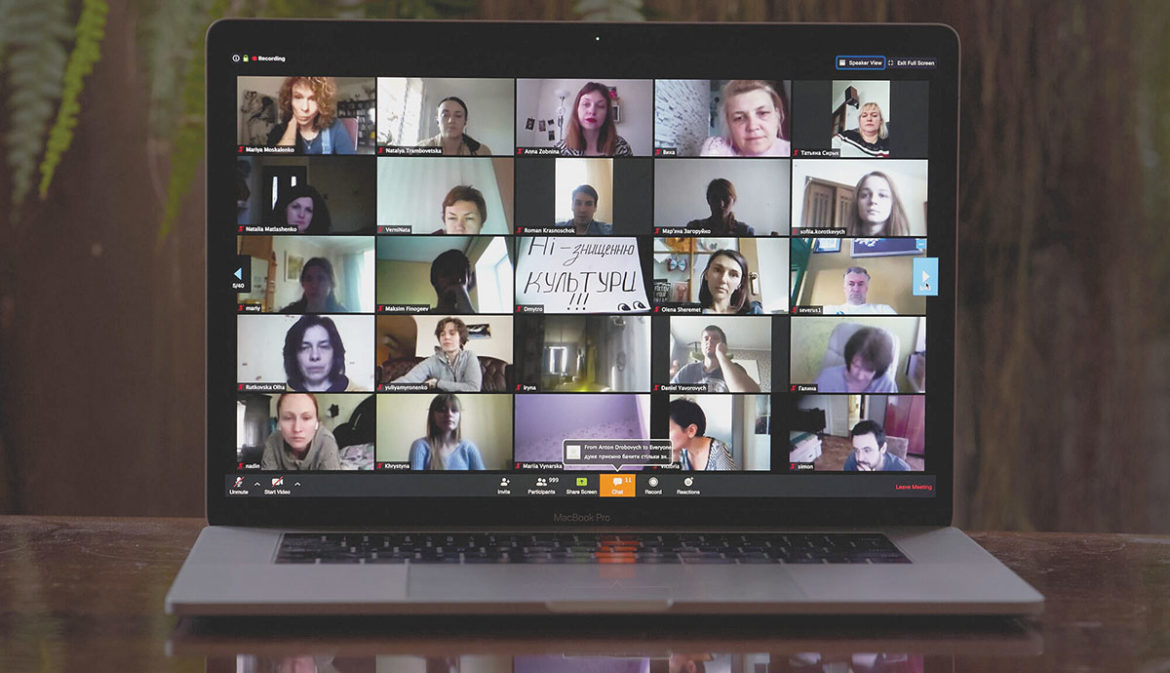 A view of the online protest against culture budget cuts.

KYIV – As an emergency measure to address the country’s health and economic crises, Ukraine’s Ministry of Finance has said it plans to cut funding for all activities of the Ministry of Culture and Information Policy, as well as funding for youth and sports, by 7 billion hrv.

“This is far from being a complete list of cuts of the Ministry of Culture. Besides, it is not yet known what would be cut for the Ministry of Youth and Sports,” said Oleksandr Tkachenko, a member of the Servant of the People Party who chairs the Verkhovna Rada Committee on Humani­tarian and Information Policy.

In his opinion, reducing these expenditures will lead to the liquidation of the State Film Agency of Ukraine, the Ukrainian Cultural Fund, the Book Institute and more. “What does it mean? This is the death of the entire creative industry. Hundreds of thousands of people will be out of work. The efforts made to grow and develop the cultural spheres that have been achieved in recent years will come to naught. We will recede for a few years,” Mr. Tkachenko, who is also honorary president of 1+1 Media Holding, wrote on Facebook.

“We have submitted all the necessary justifications to the Ministry of Culture and Information Policy (earlier called the Ministry of Culture, Youth and Sports), the Cabinet of Ministers, the Presidential Office, the humanitarian and budget committees of the Verkhovna Rada,” said Oleksandra Koval, director of Ukrainian Book Institute. “Together with the Ukrainian Cultural Fund, the Art Arsenal, the Dovzhenko Center and the Ukrainian Institute, we issued an appeal to the government signed by several thousand people.”

When the plan to cut the cultural budget became publicly known, thousands of people involved in creative industries expressed their anger and disagreement on social media. An initiative group of culture workers initiated an online protest because, due to the coronavirus quarantine, large outdoor gatherings are prohibited. “In this situation, we cannot remain silent. Even now, in quarantine, we have to show that there are many of us, and we will not allow the destruction of Ukrainian culture,” said the announcement of the event scheduled for March 27.

The protest slogan was “No to Destroying Culture!” It was the first rally in Ukraine held in an online format. About 10,000 people were willing to join the action from all over Ukraine, according to organizers. Unfortunately, due to technical limitations, only 1,000 participants could take part in the event at one time. Still, during the two hours of the online meeting, participants replaced each other in a video call via the Zoom application. Others watched the stream on Facebook and YouTube.

The Weekly reached out to Ms. Koval of the Ukrainian Book Institute for comment. “The Ukrainian authorities have never demonstrated an understanding of the importance of culture as a factor of sustainable development. This is evidenced by the fact that the financing of culture in the state and local budgets in all years was done on a residual basis, and not according to the needs of the cultural sector and creative industries. Most officials believe that culture is something that is optional, an area of ​​entertainment that can be painlessly abandoned in difficult times,” she noted.

“During each economic crisis in Ukraine book publishing fell from 40 percent to 90 percent, publishing houses disappeared, bookstores were closed, the state did not always fulfill its obligations to pay for books purchased for schools and libraries. The publishers themselves have had to restore the whole sphere. However, the book trade has not been able to resume. Instead of 4,000 bookstores in Ukraine, there are now barely 200, but even these will disappear in two-three months,” Ms. Koval believes.

“The government has approved a draft law amending the state budget for 2020. It is designed to address the effects of the spread of the COVID-19 infection and support economic activity in the country. In addition, when updating the indicators, the impact of the macroeconomic situation on changes in the external and internal environment is taken into account. In particular, reduction of trade, consumer activity of the population, output contraction and cutting investment,” the Cabinet of Ministers stated on its website on March 29.

“It is clear that we are not satisfied with all the figures. But in the second half of the year, we hope to improve the economic situation. The government is making every effort to achieve this goal,” said Prime Minister Denys Shmyhal. “At the time of the pandemic and the fight against the coronavirus, the Cabinet of Ministers clearly sets priorities. We will support people and businesses. At the same time, top officials should understand the situation and tighten their belts.”

In particular, it is proposed that, until the end of 2020, civil servants should not receive a salary exceeding 10 minimum salaries (47,230 hrv, or around $1,705 U.S.). The exception is workers involved in the COVID-19 fight and national security and defense activities. The government has also developed several mechanisms to help the population get quick access to financial assistance needed as the result of losing a job.

On March 30, the Verkhovna Rada of Ukraine dismissed a bill with amendments to the national budget for 2020. The Rada sent the bill for revision to the Budget Committee and cut the time allowed for its review.

“Due to the fact that not all deputies had a chance to read the proposed amendments to the state budget for 2020, the document failed to be approved at an extraordinary meeting today,” explained Prime Minister Shmyhal. “We worked on the budget together with the parliamentary committee practically around the clock. This is an emergency situation budget,” he noted. “We have taken the budget to finalize it, and to hear proposals and amendments. I believe it will be voted on in seven to eight days.”

Risks for culture can be seen in the example of the Ukrainian Book Institute, which could be liquidated. “Last year, we submitted a budget request for project and program activities for 250 million hrv, which was satisfied by only 50 percent. And now the program and project part of our budget has been reduced from 125 million [hrv] to 25 million, that is to one-fifth. The Book Institute will receive only 10 percent of its real need for implementing and developing projects and programs,” said its director, Ms. Koval.

Most of the institute’s ambitious plans could soon be canceled. “We planned to represent Ukrainian publishers at six important book fairs this year: in Vilnius, Paris, London, Bologna, Warsaw and Frankfurt. We wanted to start the Program of Support for Translation of Ukrainian Literature in Foreign Languages. However, this year the program will be canceled and more than 80 translations of wonderful Ukrainian works will not be published in different countries, with a total circulation of 200,000 copies,” explained Ms. Koval. “We also planned to launch the Ukrainian Digital Library, which would allow people who read Ukrainian wherever they are – in a Carpathian village, the frontline zone, the occupied territories or other countries, to get free access to several thousand novelties of Ukrainian literature, which would facilitate its promotion and development of the Ukrainian book market. This will not happen now. For 2020 we also planned the purchase of 600,00-700,000 books for the replenishment of public library holdings. After sequestration of the budget, this can be a maximum of 200,000 copies. And that is exactly how we will spend the 25 million hrv allocated to us. Everything else is canceled,” she said.

“We understand what a difficult time it is now, and that the whole situation in Ukraine and the world can get worse,” Ms. Koval said. “Of course, a culture will never disappear, but in a couple of months or a couple of years the whole cultural landscape will unknowingly change, and you will have to start over again, as if we had made no progress in the last 30 years.”