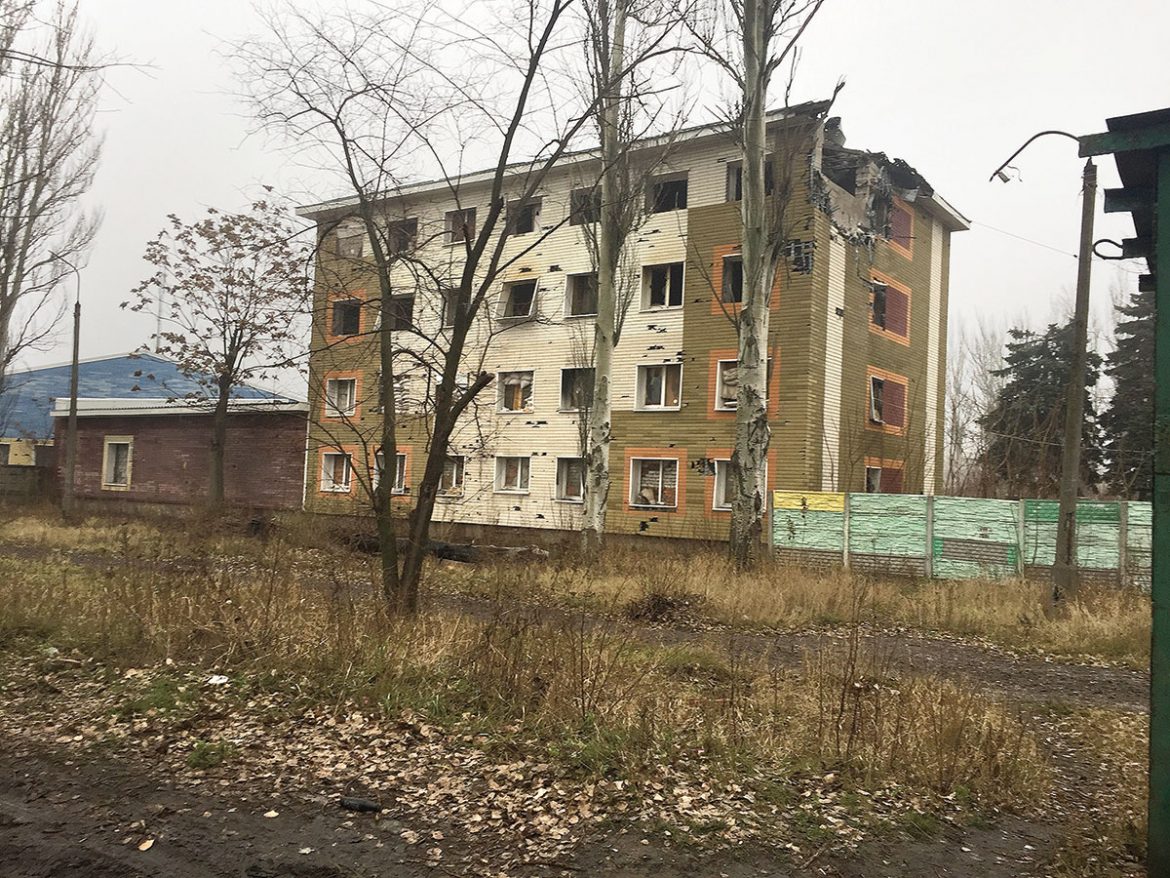 An abandoned residential, four-story building in Avdiyivka that was rendered uninhabitable by Russian artillery shelling.

KRAMATORSK-AVDIYIVKA, Ukraine – As the shelling renewed at 3 p.m. less than an hour before dusk, women were still calmly seen carrying grocery bags, and an unmarked school bus was shuttling children home through an armed checkpoint.

The artillery salvos emanate from Russia-occupied Donetsk and sound like Howitzer canons, said the soldiers at the northern part of Avdiyivka, an industrial town where one of Europe’s largest coke plants operates and which had a pre-war population of 15,000.

“They’re incoming shells, but it’s too far away… they’re probably targeting [government-controlled] Opytne,” a soldier whose call sign is “Sam” told The Ukrainian Weekly at the checkpoint on December 4, referring to a neighboring town that is closer to Donetsk. He declined to give his name for safety reasons and because he didn’t have authorization to speak to journalists.

The pounding originated three kilometers south of this war-torn settlement, where only about 5,800 civilians remain, according to a July report commissioned by the U.S. Agency for International Development.

The remains of the Donetsk Airport that was renovated when the country co-hosted the 2012 quadrennial European soccer tournament are still visible from rooftops on clear days. It was heroically defended by Ukrainian forces dubbed “cyborgs” by the Ukrainian media, and then abandoned when there was “nothing left to defend” after Russian destruction, as the military likes to say.

Adaptation to war conditions abounds. For example, boys play soccer on muddy fields amid shell casings from Grad rockets and from the deep pits they create when landing.

As the explosions grew in frequency later in the day, the soldiers manning the checkpoint said that nighttime is when the shelling intensifies, including from occupied Yasynuvata, situated 10 kilometers to the east.

This is the daily reality for some 200,000 people who live within the five-kilometer war zone along the 457-kilometer frontline, according to a report published on December 4 by the United Nations Office for the Coordination of Humanitarian Affairs.

Since Russia’s unprovoked war on Ukraine started in April 2014, more than 10,220 Ukrainians have been killed. If the Donbas war is forgotten, then people are reminded of it every 30 minutes, which is how often an artillery shell lands, according to the U.N.

Ukraine already is home to the world’s ninth most mined area, with 103 civilians having been killed or wounded in mine-related incidents in January-September of this year. Over all, more than 2,500 civilians have died since April 2014, 82 of them this year as of December 3, according to data provided by the Organization for Security and Cooperation in Europe (OSCE). 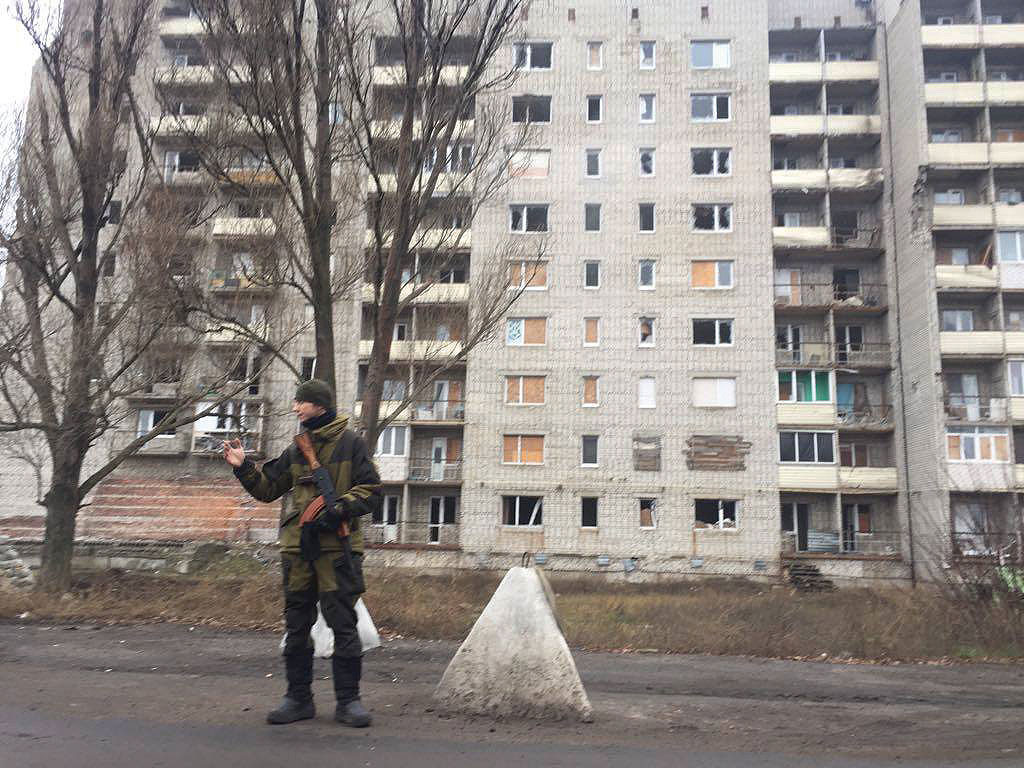 A Ukrainian soldier waves a vehicle by while guarding a checkpoint in the frontline town of Avdiyivka in Donetsk Oblast on December 4.

As winter sets in, up to 1.2 million civilians face food shortages on both sides of the frontline, according to the U.N. Meanwhile, 4.4 million people are affected by the war by not regularly having access to employment opportunities, shelter, heating and other daily amenities.

More than 1.6 million people have been uprooted from their homes as a result of Moscow’s war-mongering in what is the largest internal migration of people on the European continent since World War II.

Furthermore 403 people are missing in the Donbas, according to the Verkhovna Rada’s first deputy chair, Iryna Herashchenko. Fifty-three Crimean Tatars are considered to be prisoners of conscience on the Ukrainian peninsula that the Kremlin illegally annexed in March 2014. A further 16 Ukrainian citizens became political prisoners in Russia, she said on December 4, while addressing the Ukraine-NATO Inter-Parliamentary Council in Brussels.

Back in Avdiyivka, another soldier who refused to give his name for personal safety reasons said he is manning the roadblock so that Russia doesn’t bring war closer to his abode in Koncha-Zaspa, a Kyiv suburb.

“As a Ukrainian, I can say that it’s quite offensive that our so-called former Russian brothers behave in such a way towards us by initiating war here,” he said. “The entire world knows that tractor drivers aren’t fighting us, that it is actually the Russians. I’m here to ensure that war doesn’t come to my home.”

Also on December 4, the OSCE reported that there were “300,000 ceasefire violations this year” alone. A particular episode took place on the same day that The Ukrainian Weekly visited Avdiyivka. Approximately 100 kilometers northeast, in the area of Svitlodarsk, a reconnaissance team from the 7th Motorized Infantry Brigade of the 7th Army Corps of the 8th Army of the Southern Military District of the Russian Federation was ambushed by Ukrainian forces.

“As a result of the firefight, the commandos tossed two of their wounded and one killed onto the battlefield and quickly left the line of fire,” Ukraine’s Ministry of Defense reported.

On the Kremlin side, casualty figures emerged this week from a Russian insurance agency, SOGAZ, that won a procurement order from its country’s Defense Ministry. It stated that 1,416 Russian servicemen had died in 2014-2015 under “insurance incidents,” the business daily Vedomosti reported on December 4. Based on an order by Russian leader Vladimir Putin in 2010, the Defense Ministry stopped reporting Russian military fatalities after that year.

An American unmanned spy plane on December 4 allegedly did reconnaissance above the occupied area, which encompasses about 3 percent of Ukraine’s territory, the Interfax news agency reported, citing navigation monitoring sites like Aircraft Spots, Air-Port.com, Airliners.net, Airframes.org, and others. 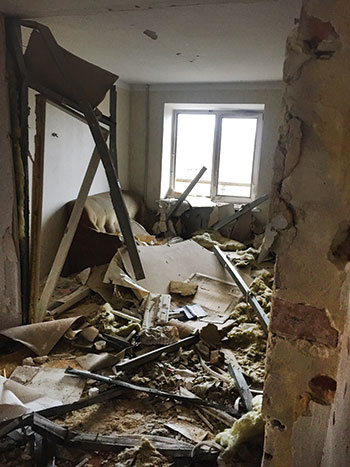 Once somebody’s bedroom, this residential space on the seventh floor of a high-rise building in the Donetsk Oblast frontline town of Avdiyivka was devastated by shelling from Russian-led forces earlier this year.

Flying at an altitude of nearly 54,000 feet, the RQ-4B Global Hawk plane allegedly surveyed the occupied area, as well as the Ukrainian-Russian border that the countries share, through which Moscow sends troops, supplies and weapons and where it operates training camps and army bases.

The U.S. Air Force declined to comment. “Headquarters will not comment on matters of intelligence and surveillance,” U.S. Air Force Capt. Kay Nissen said in an e-mailed response to The Ukrainian Weekly’s inquiry on December 6.

Despite the war and the humanitarian crisis it has wrought, Donetsk Oblast authorities are moving ahead.

The Donetsk Oblast State Administration is building a network of school and kindergarten hubs for children close to the war to have havens for learning. Social and engineering infrastructure projects, like renovating hospitals, providing heat, water and natural gas to settlements are also under way, according to Yevgen Vilinsky, the first vice-governor of Donetsk Oblast.

“In Avdiyivka… we are constructing a gas supply station and pipeline to provide the city with [natural] gas. So, I think we are creating the showcase for other parts of Donetsk Oblast not controlled by the Ukrainian government to demonstrate the success in our region,” he told The Ukrainian Weekly at his office in Kramatorsk on December 4.

As a successful businessman from Kyiv who ran a transportation and logistics company, Mr. Vilinsky now is in charge of development for the war-ravaged region.

“We need to build a new Ukraine. We need to provide our people, our children with the best future,” he said. “So we are trying to pay more attention to develop human capital here for the development of the social environment.”

Asked whether Ukraine’s future also includes the part of the Donbas that currently is occupied, he said: “Yes, of course, We will be there. I’m very sure of that. I hope all these challenges make us stronger.”